Verona. It is in Northern Italy along the river Adige. This is an old town with plenty of history, historical buildings and is a big tourist spot. Today Verona is hugely popular during the summer months with a very vibrant cultural scene. It hosts operas every day from June to September, wine festivals and several annual fairs are held here. We of course are here in spring before all the hoopla starts.  Why Verona? We do like these small old towns. Bologna, Bergamo, Ghent, Strasbourg, Bruges, Lyon, Dijon and Toulouse are all old, small and damn pretty.

Verona, as I said in the previous paragraph, is an old town. In approximately 30AD, that is almost 2000 years ago, the Romans were here. They built a magnificent Arena. This is a stadium from the old days, if you have seen the movie Gladiator you will know what I mean. If you have read Asterix in Rome you will know what I mean. Well, this Arena is still standing and still in use today. The outer wall collapsed but a small part still exists. The Arena is the venue of the Opera during the summer months. The structure itself is very impressive. To watch opera sitting inside will be a truly mind boggling experience. 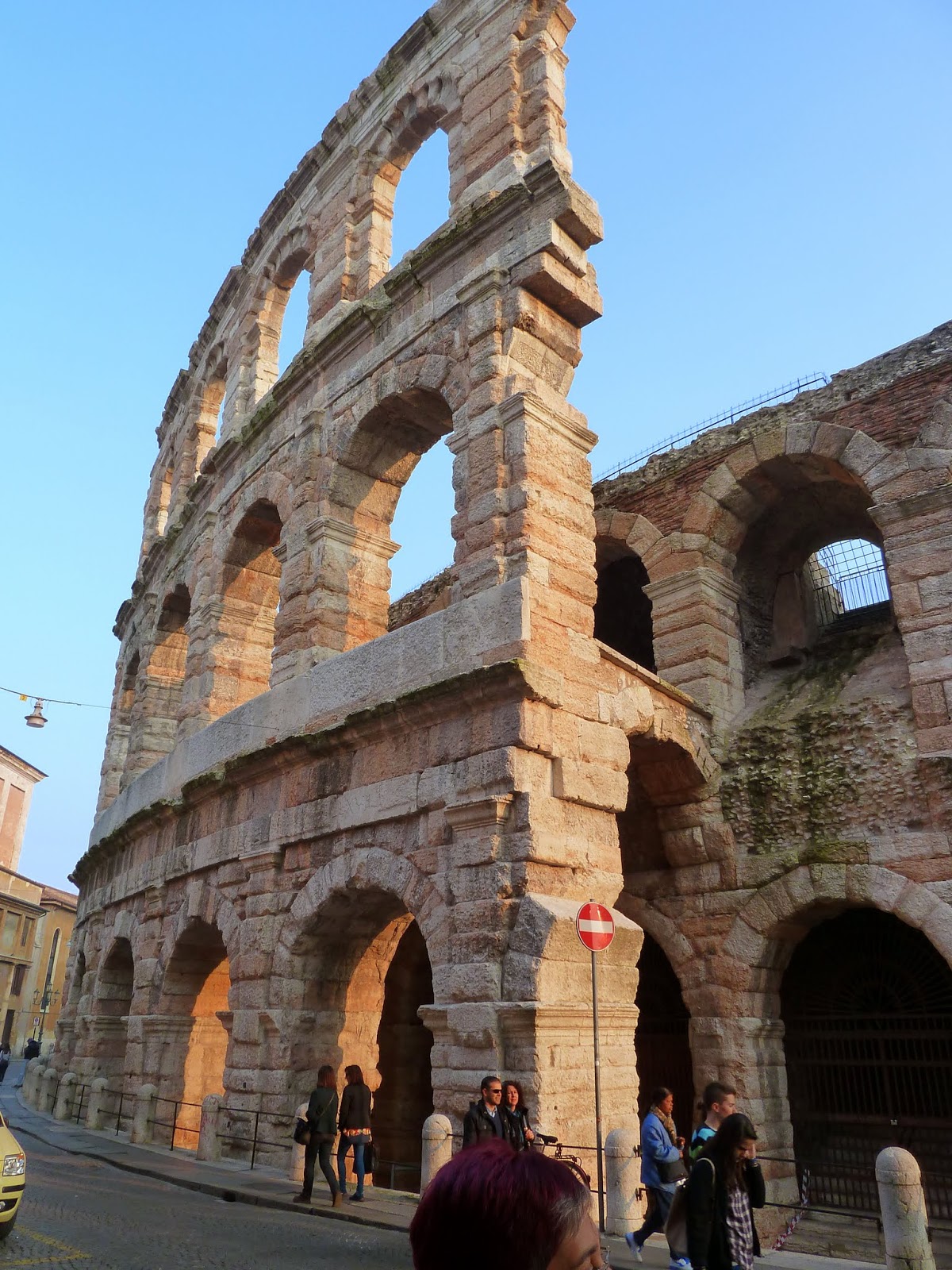 Also surviving from the Roman times is a gate called the Porta Borsari. The lower section is said to date from 1st Century BC, yes BC, and the upper section has been constructed on top someone in the 1st Century AD. All in all, it is pretty old. 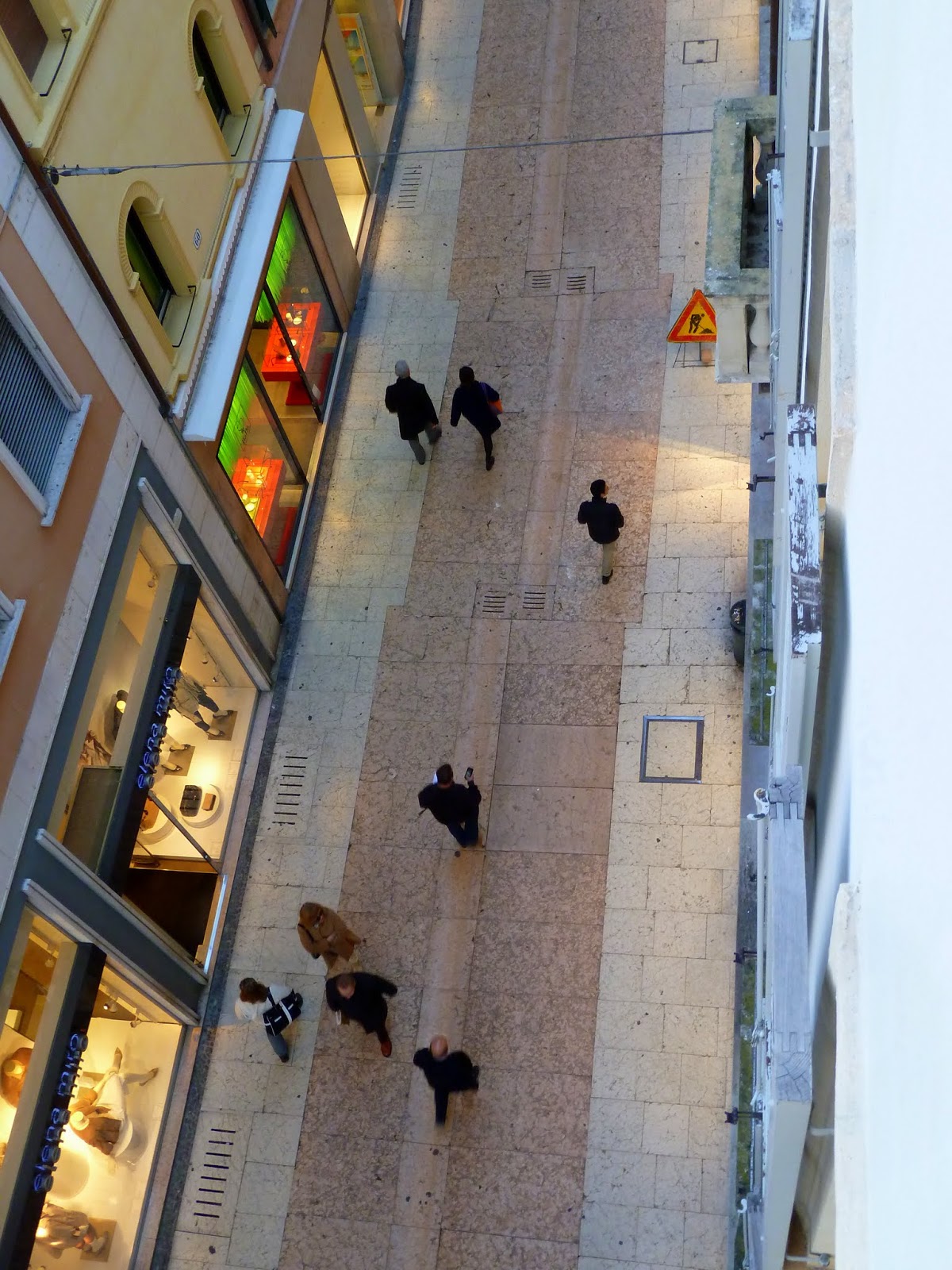 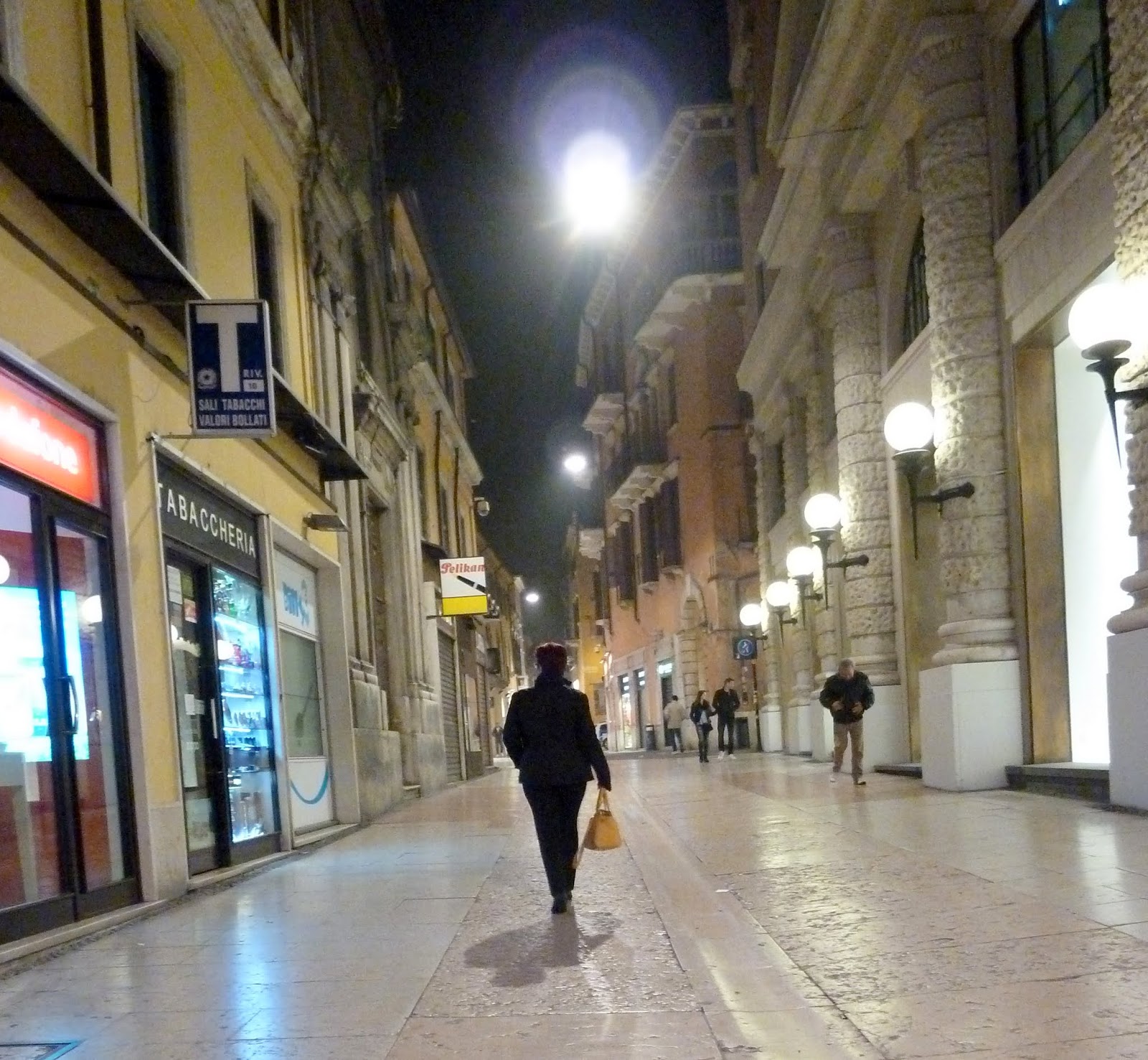 Verona also was the setting for 3 of Shakespeare’s plays, Romeo and Juliet, The Two Gentlemen of Verona and the Taming of the Shrew. I bet you did not know that. Juliet’s `house’ is located here and this is a major tourist attraction. This house is supposedly the location of the famous balcony love scene from Romeo and Juliet. We went there at the relatively early hour of 10 am. The place was teeming with Japanese tourists. No one else wakes up that early, just the Japanese and two nutty Indians. There is only one problem, the house has no connection with Shakespeare's fictional characters - although the house is old, the balcony was added in 1936 and declared to be "Juliet's house" to attract tourists. The balcony overlooks a tiny courtyard containing a statue of Juliet. There is a staggering amount of graffiti and general scrawling on the walls, floor, seats and everything else - there is a tradition of writing love messages to Juliet. You can buy a lock from the convenient souvenir shops and write your and yours name on the lock, pledge undying love and leave the lock at the conveniently placed grid. I guess if you can implore `God’ thru prayer, leaving a lock with your name on it hoping for eternal togetherness is not that strange. Both fall within the realm of fantasy or day dreaming. Anyway, let us plough on. 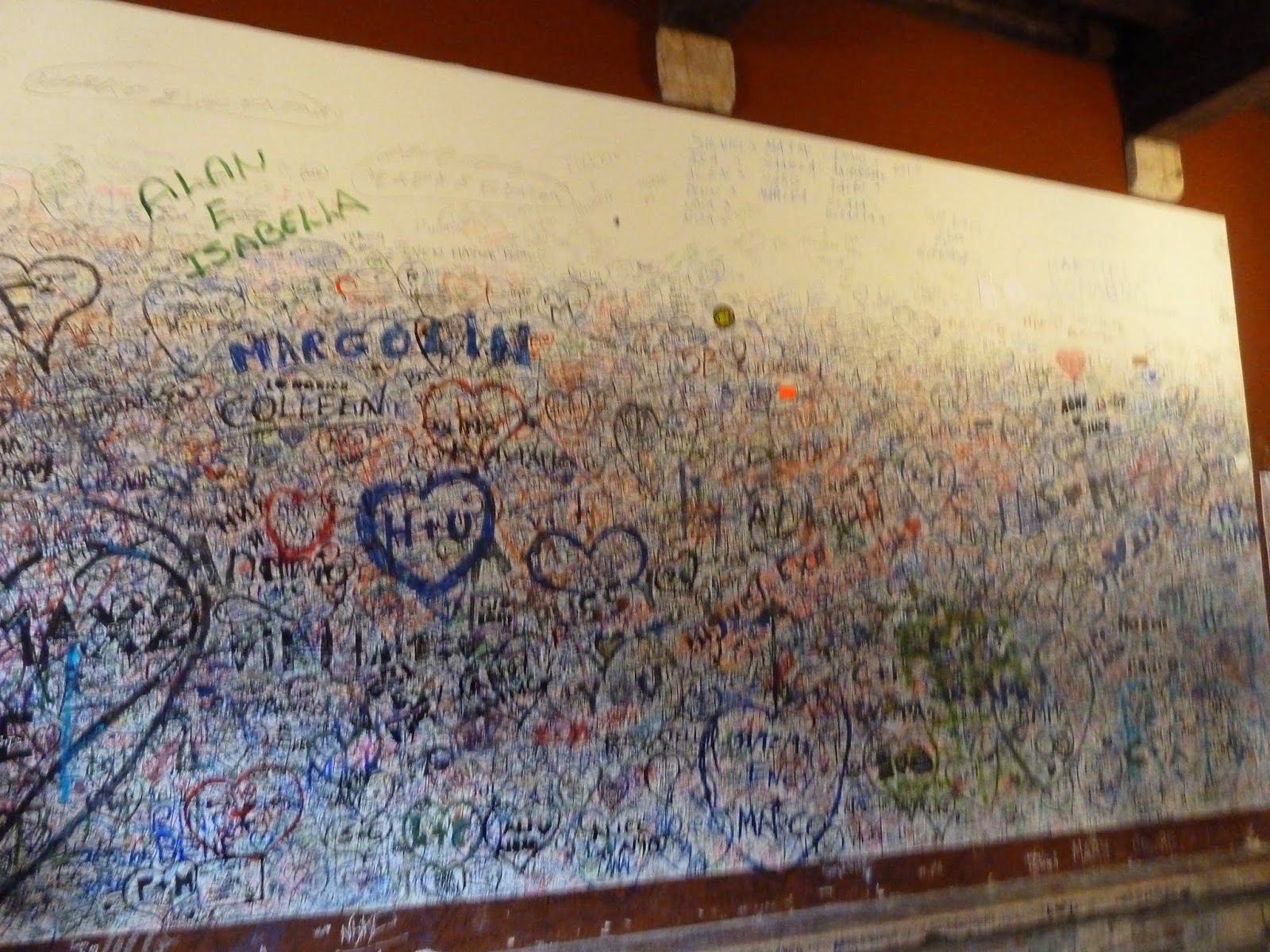 Verona does have some really nice old buildings, churches and a few museums. It has the river Adige so you can walk along its banks and cross on the many bridges. You can buy a Verona pass and get `free’ entry to a lot of these places. 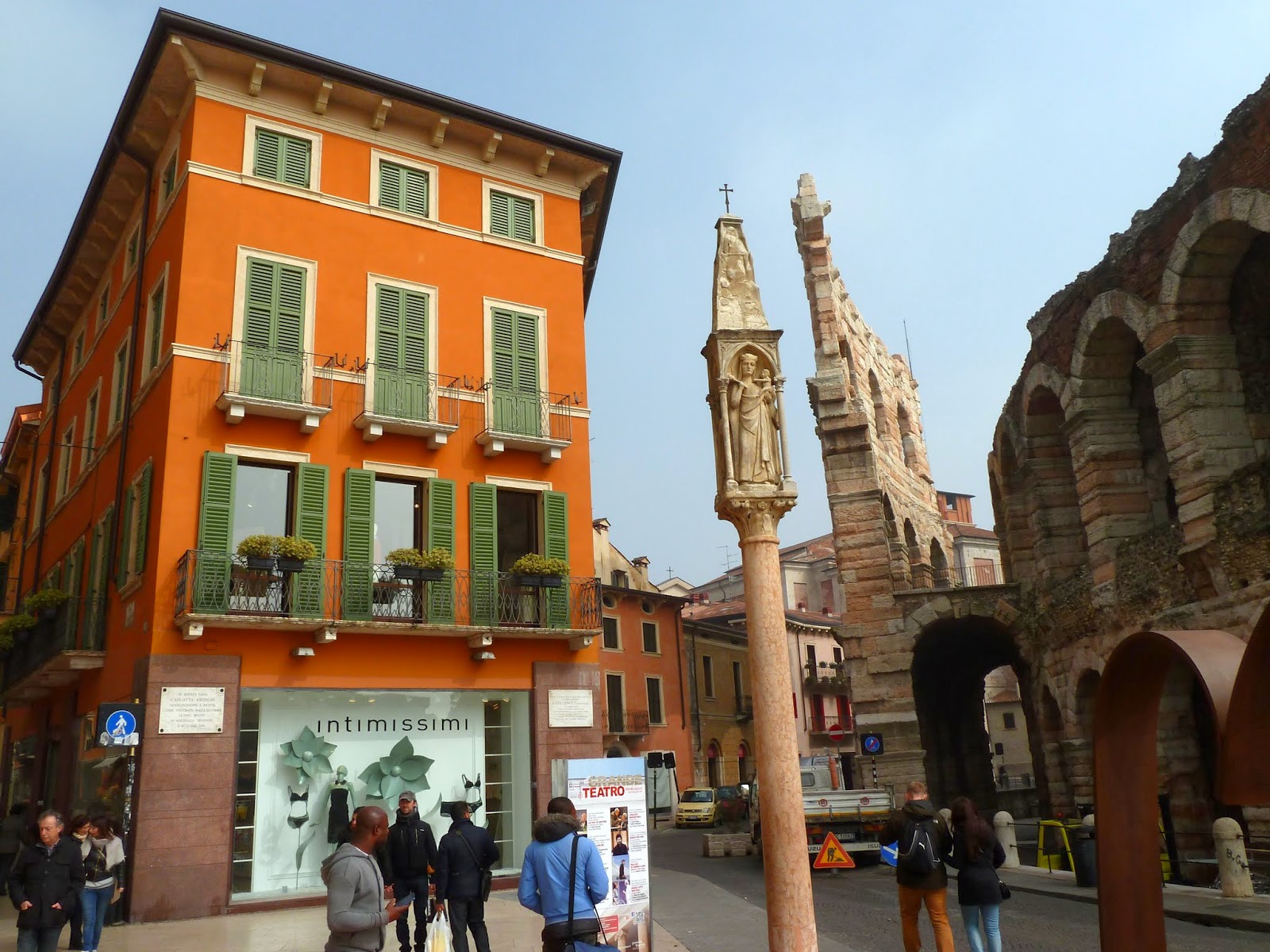 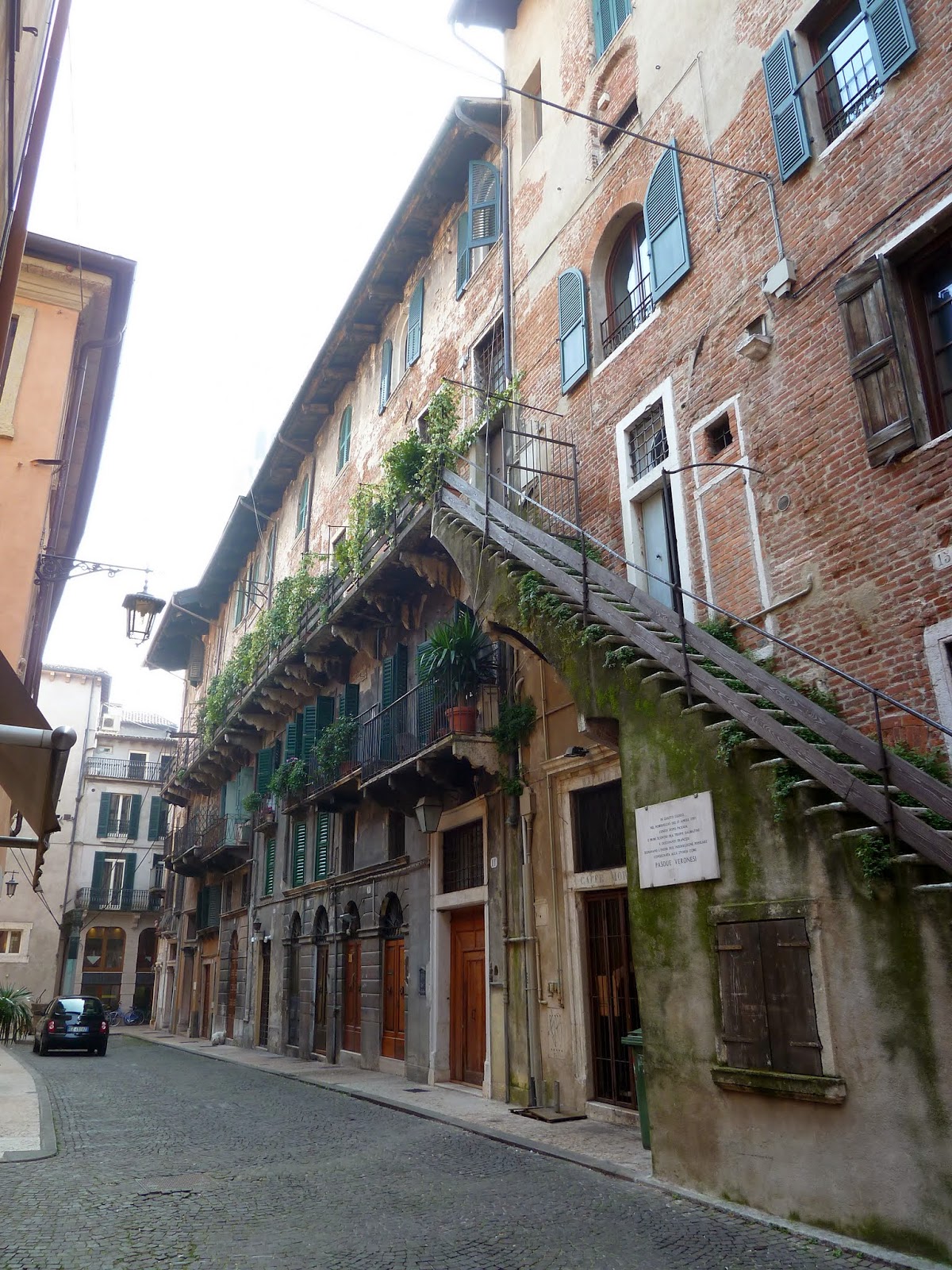 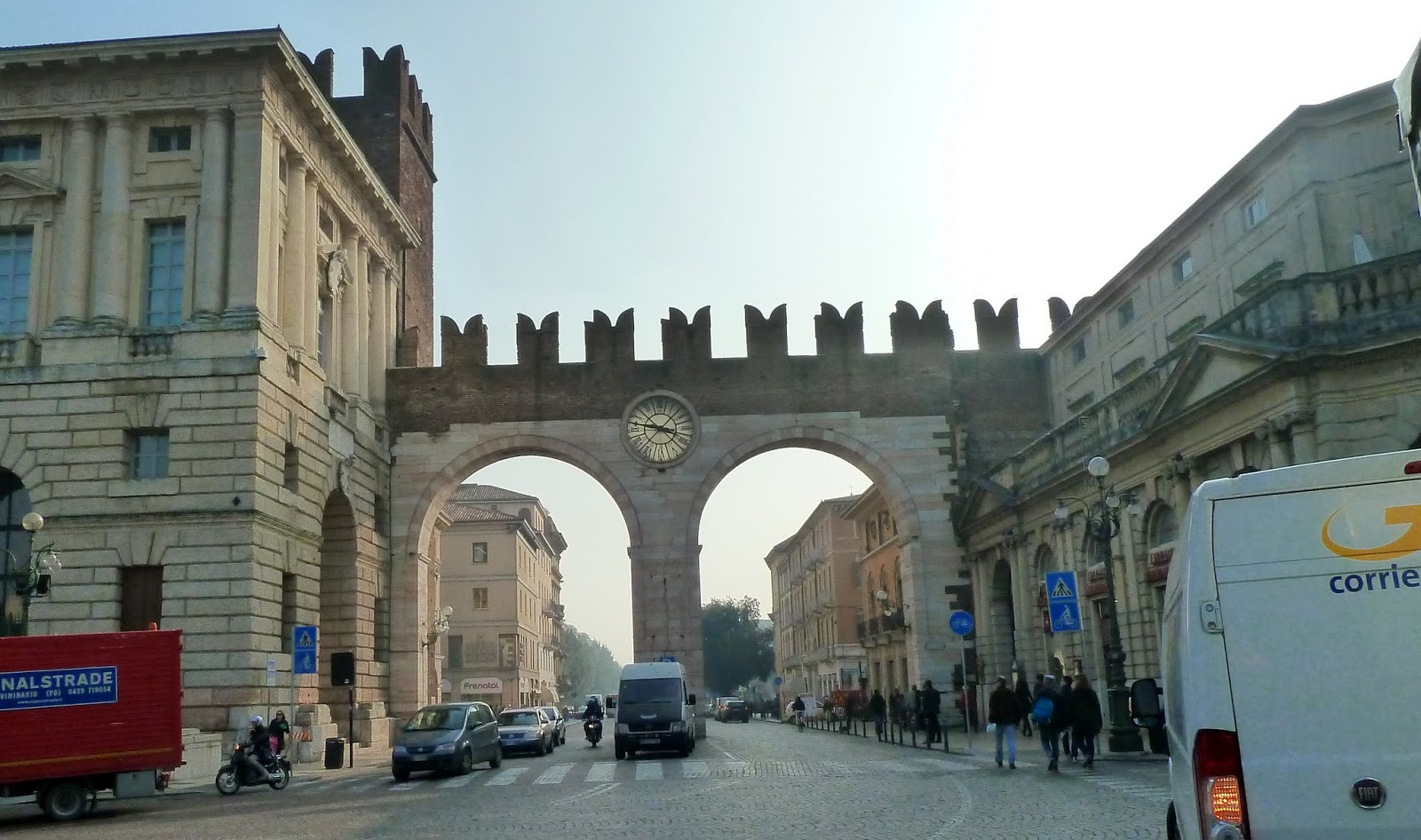 A place that you should visit when in Verona is the Castle San Pietro. This is high above the old town and a quite stiff climb. Once up you get great views of the old town. Very nice. 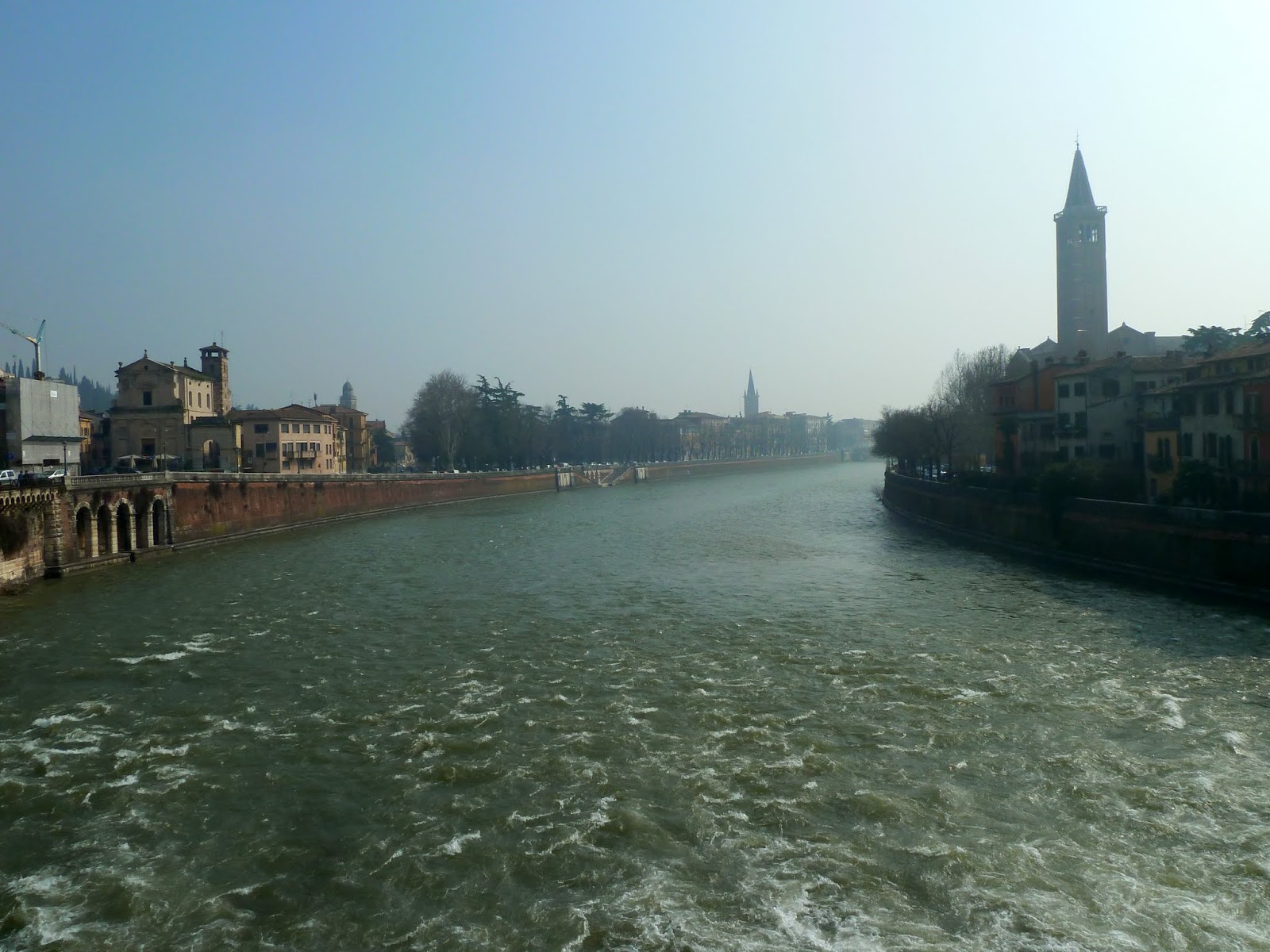 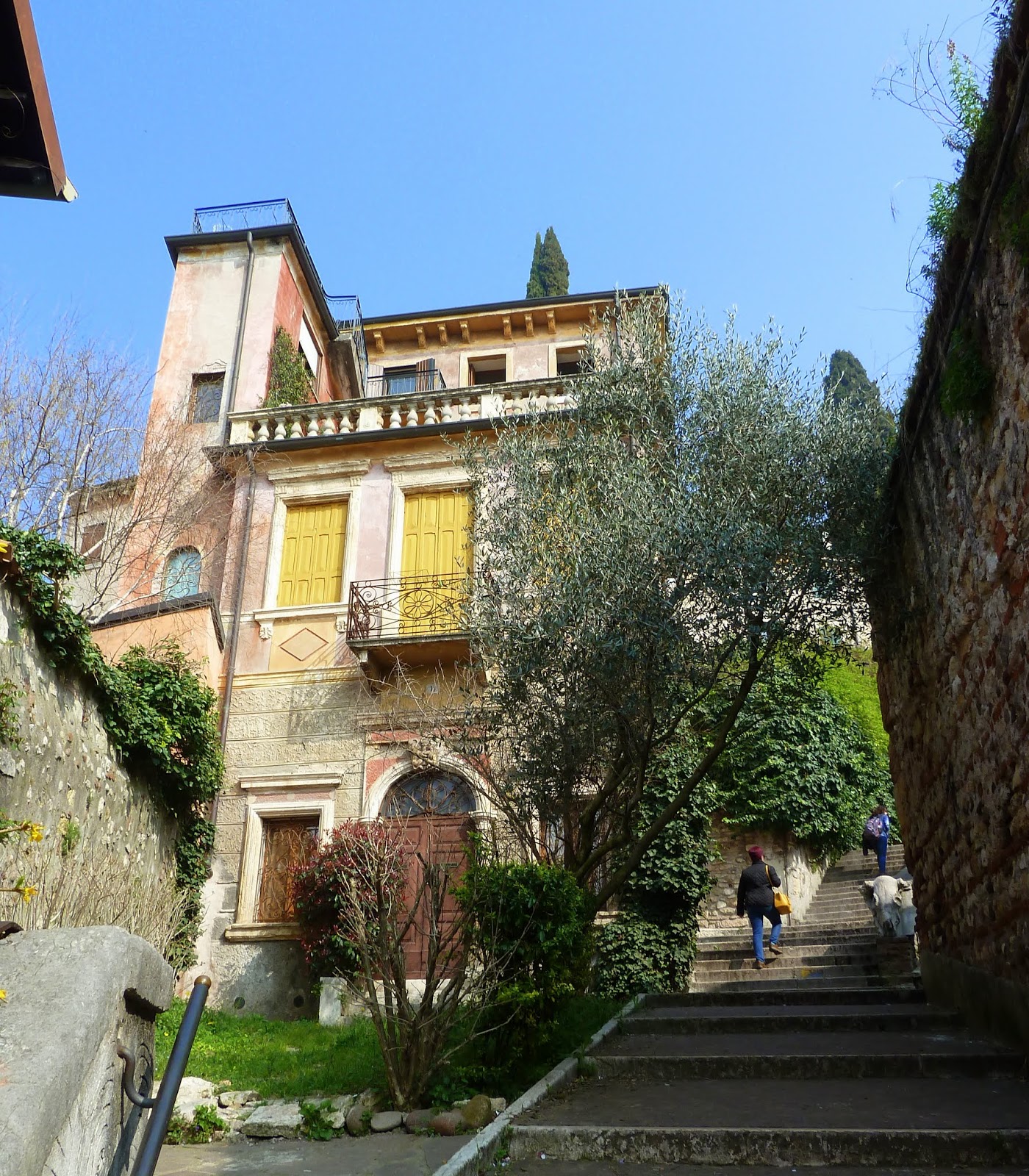 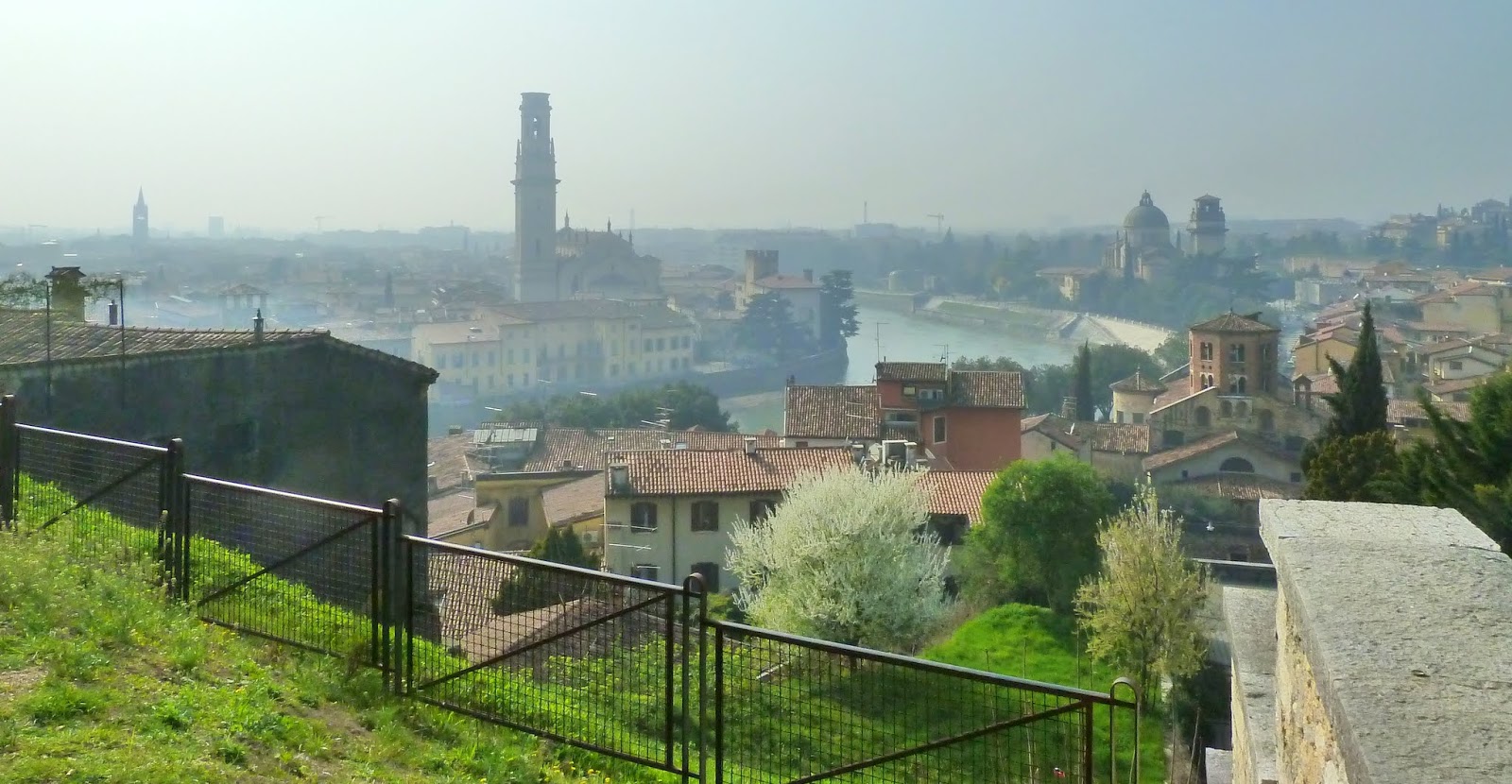 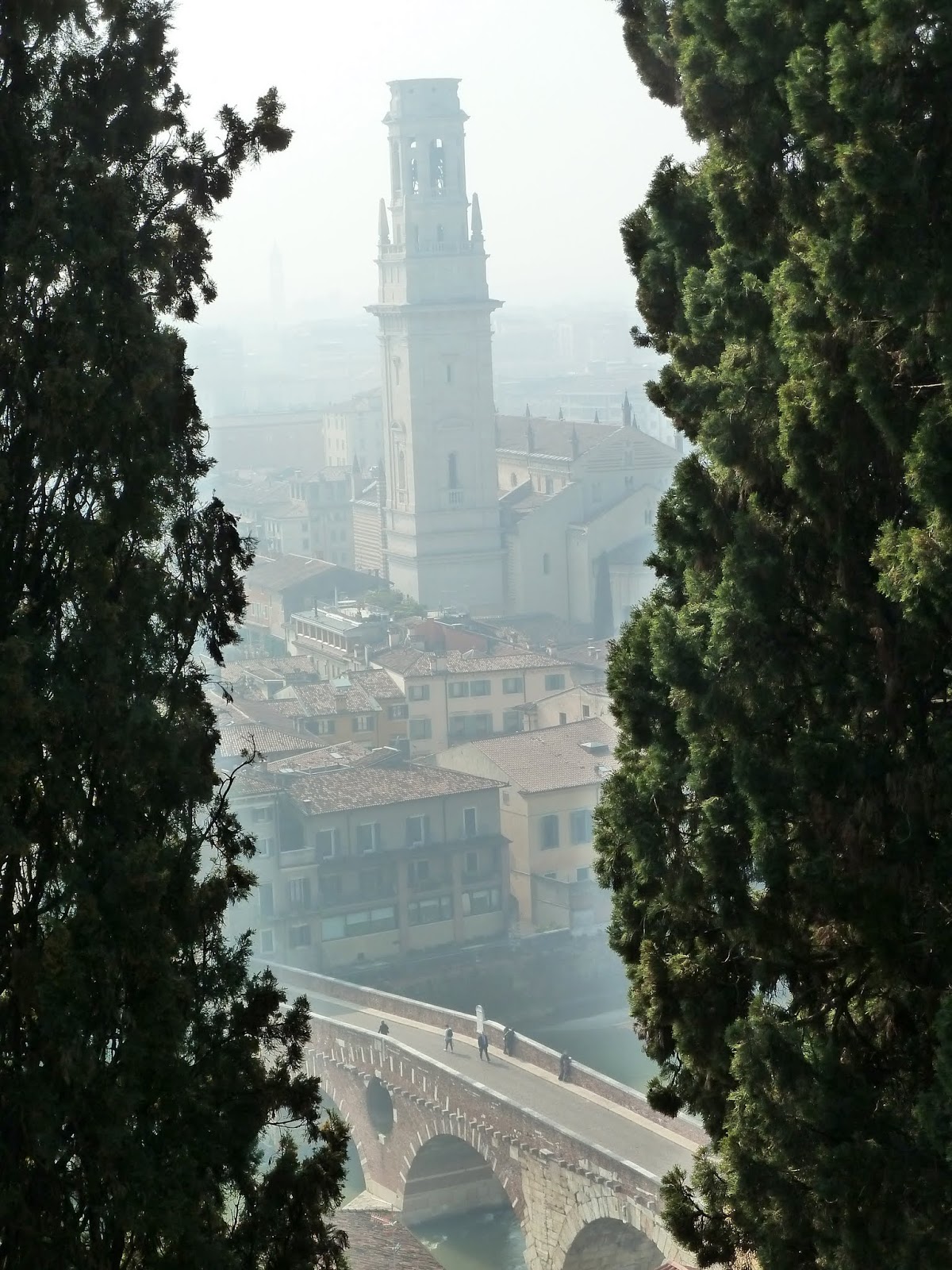 Being in Northern Italy, one of the more pleasurable, civilised and pleasant things to do is to have an Apertivo in the evening. An Apertivo is normally a bitter drink had at that odd time after work before going home. Campari or Aperol both of which are alcoholic are Apertivo’s. You could get a Crodino or a San Bitter which are non alcoholic. You go to a bar or a cafe, sit in the open, in the setting sun, watch the world go by and have a most pleasant pre dinner drink. With each Apertivo you get what we desi’s call `software’ or of you are a verni, `Chakna’. You want more `Chakna’, order one more drink. A Campari Soda is a pre-bottled. perfectly proportioned. served with lots of ice and a slice of Orange. Another very popular drink is a Spritz which is either a Campari or Aperol mixed with Prosecco and garnished with Orange served with lots of ice. Let me assure you that a Campari Spritz is really delicious and refreshing. This is something we both enjoy.

Verona is pretty small. Most people come to Verona and then combine it with another place. Popular attractions are the Lake Garda or the nearby town of Vicenza. If you like you can even take a train and go to the legendary Venice. This is exactly what we did. Venice is 120 kms away, and, depending on how much you want to pay for a train ticket i.e. 23 Euro it is a 70 minute ride or 7 Euro for an 80 minute ride. We chose Venice at 7 Euro. Venice was charming. However, I must say that this was off season but despite that the place was actually swarming with Americans and Orientals. I kept hearing an American twang wherever I was. During the season the place would be impossible. Also it was cool, the temperature hovered at about 17-19 degrees Centigrade. During the peak summer it is hot, the water levels recede and the city starts to smell. Venice we thought was great for a short 4 hours. The city is in an alarming state of decay. The lanes are very small and getting around is tough. No map will ever work. We saw the two most important sights – Rialto Bridge and the San Marco Square. Rialto bridge is a major disappointment, frankly it is rubbish. San Marco’s Square is far better, a huge square and pretty attractive. Of course we took the Water Bus to go from the station to the Rialto. Nice, charming, different but certainly not worth a stay. 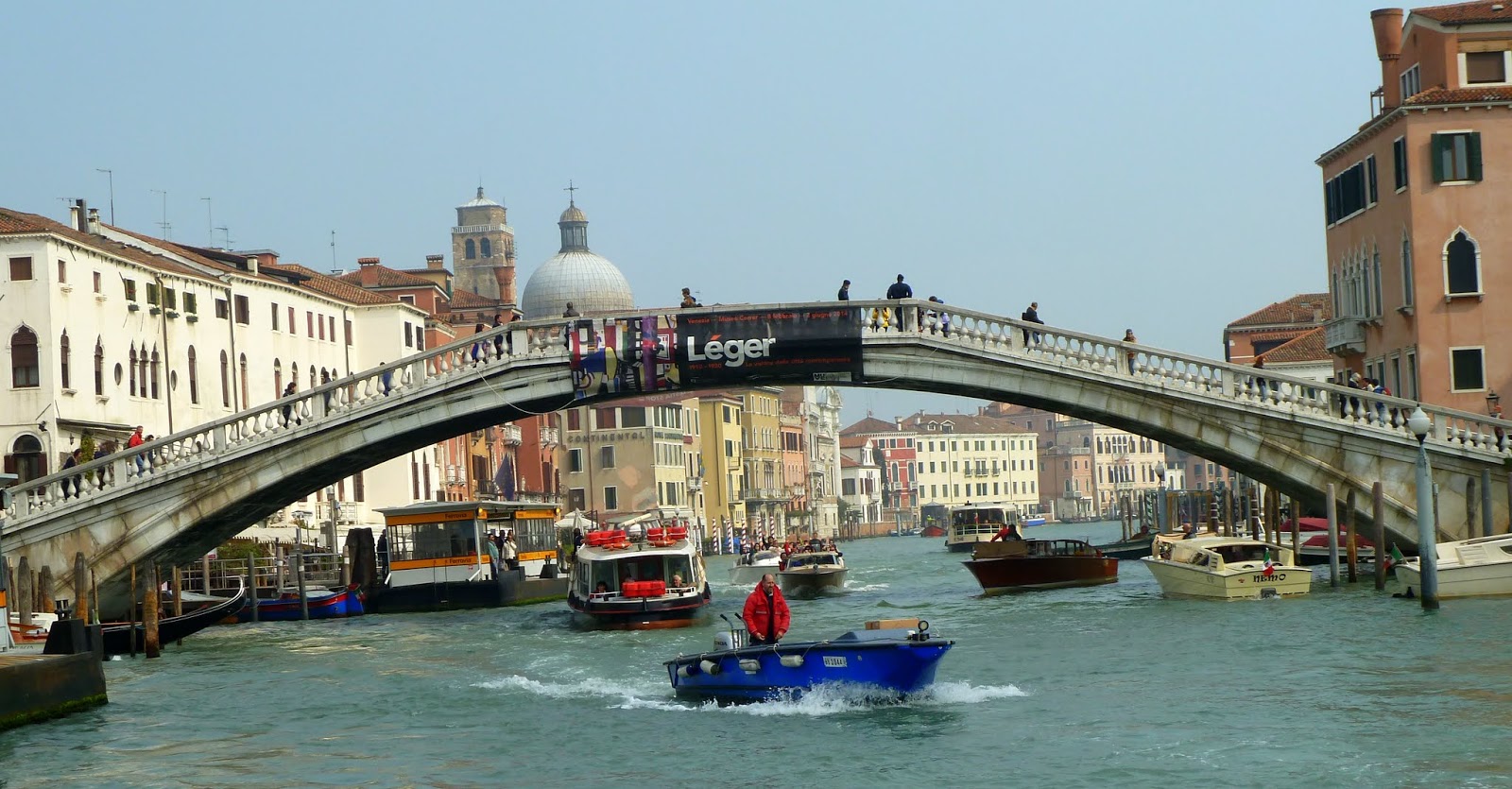 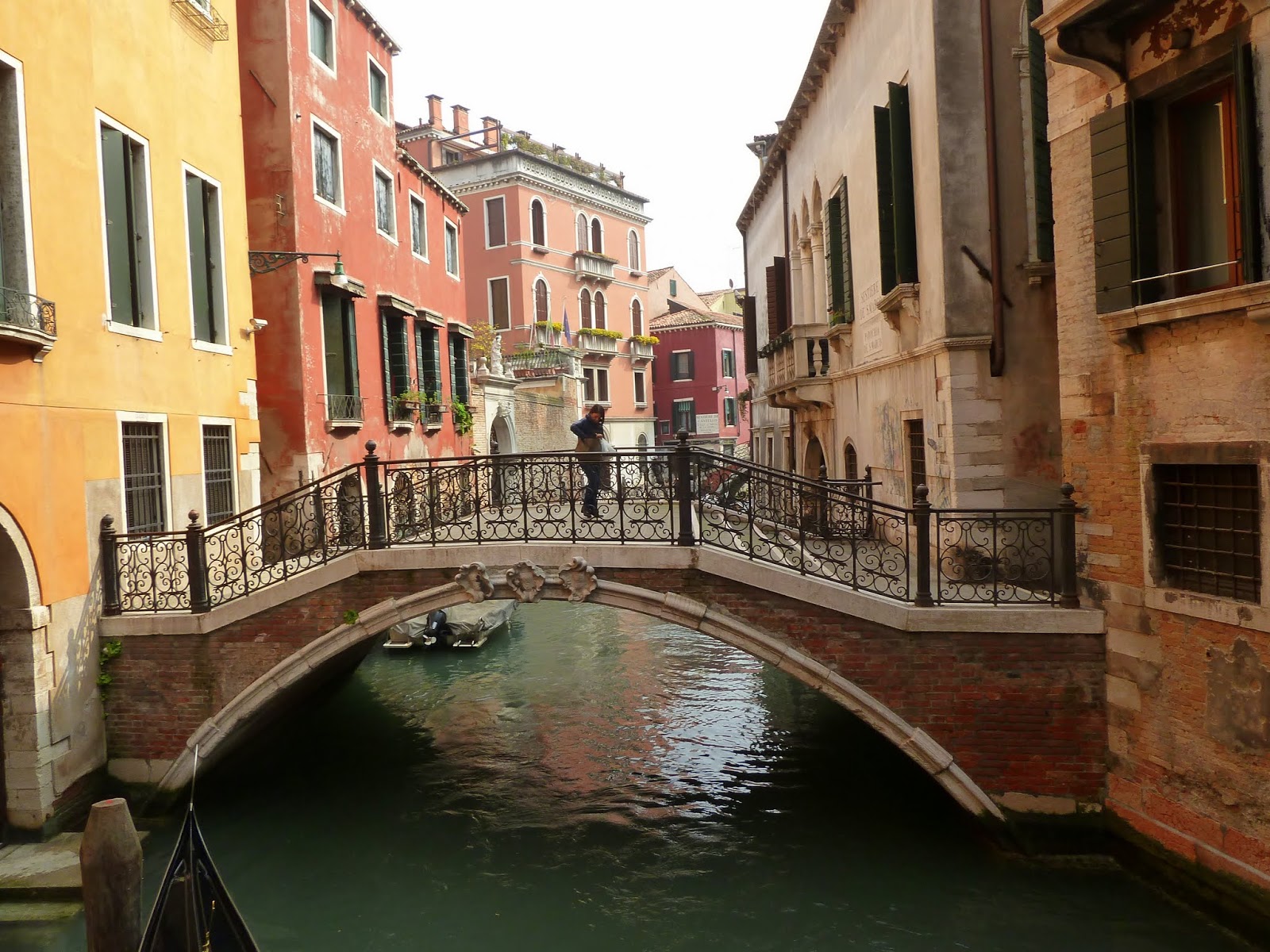 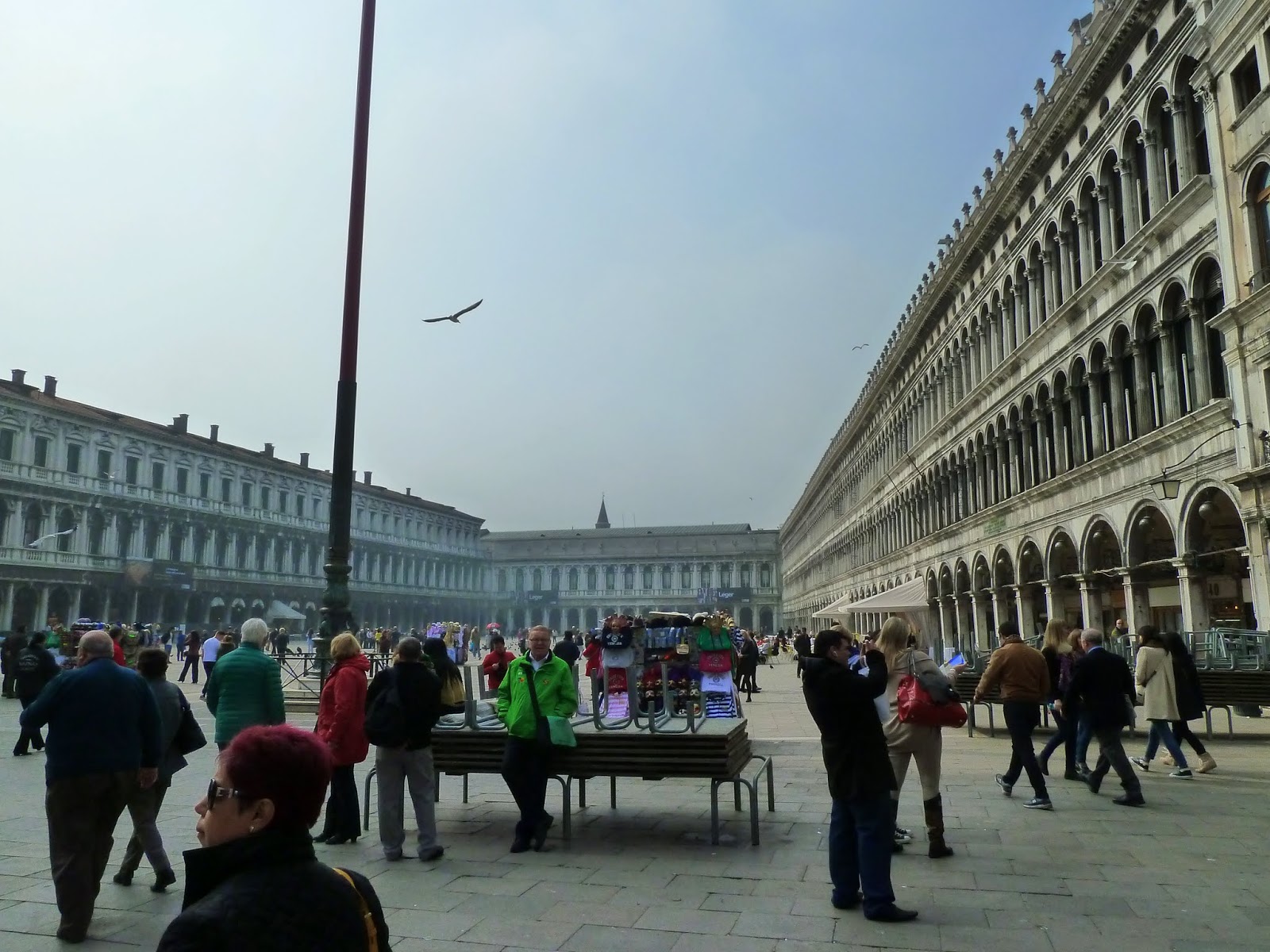 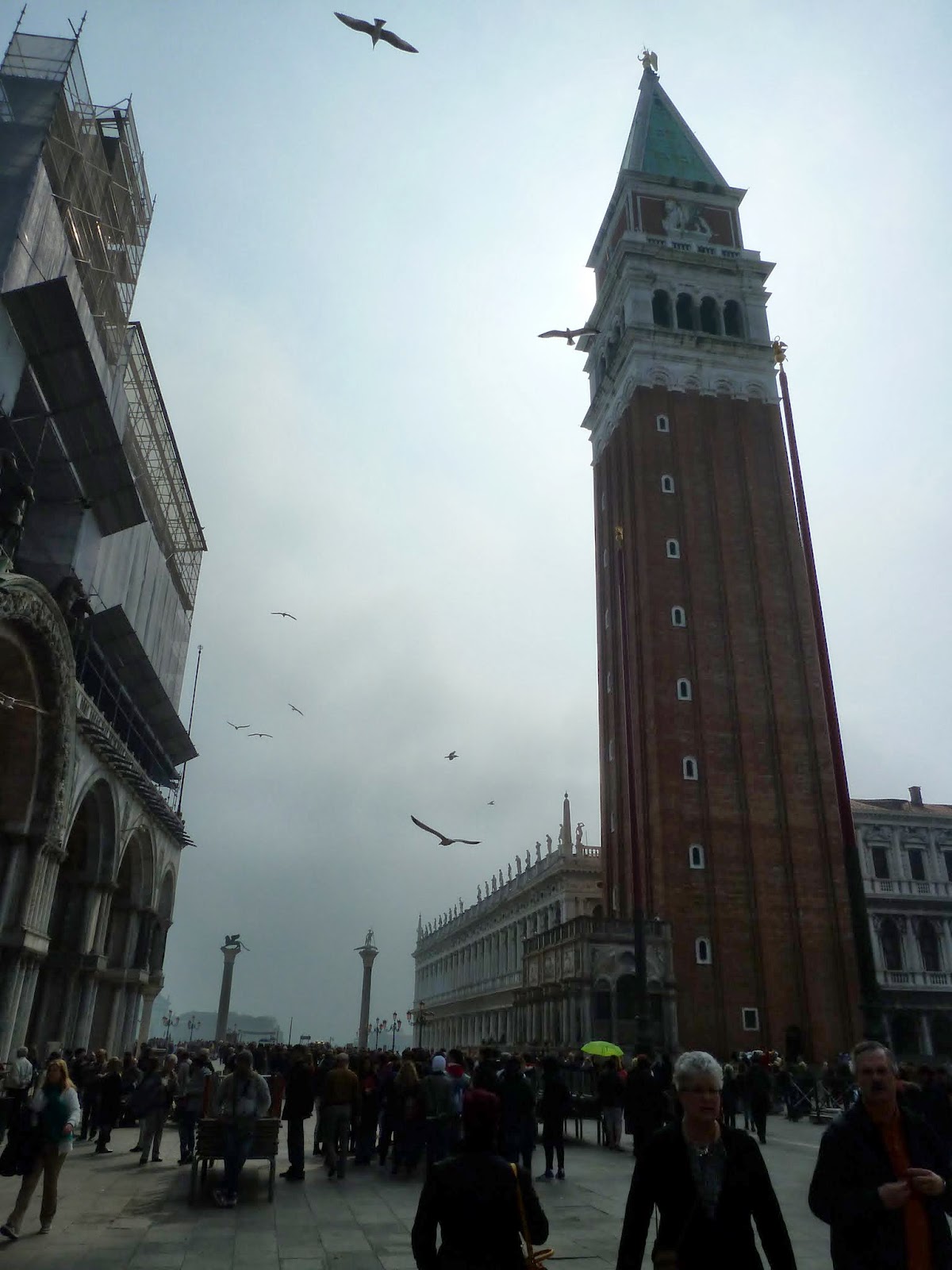 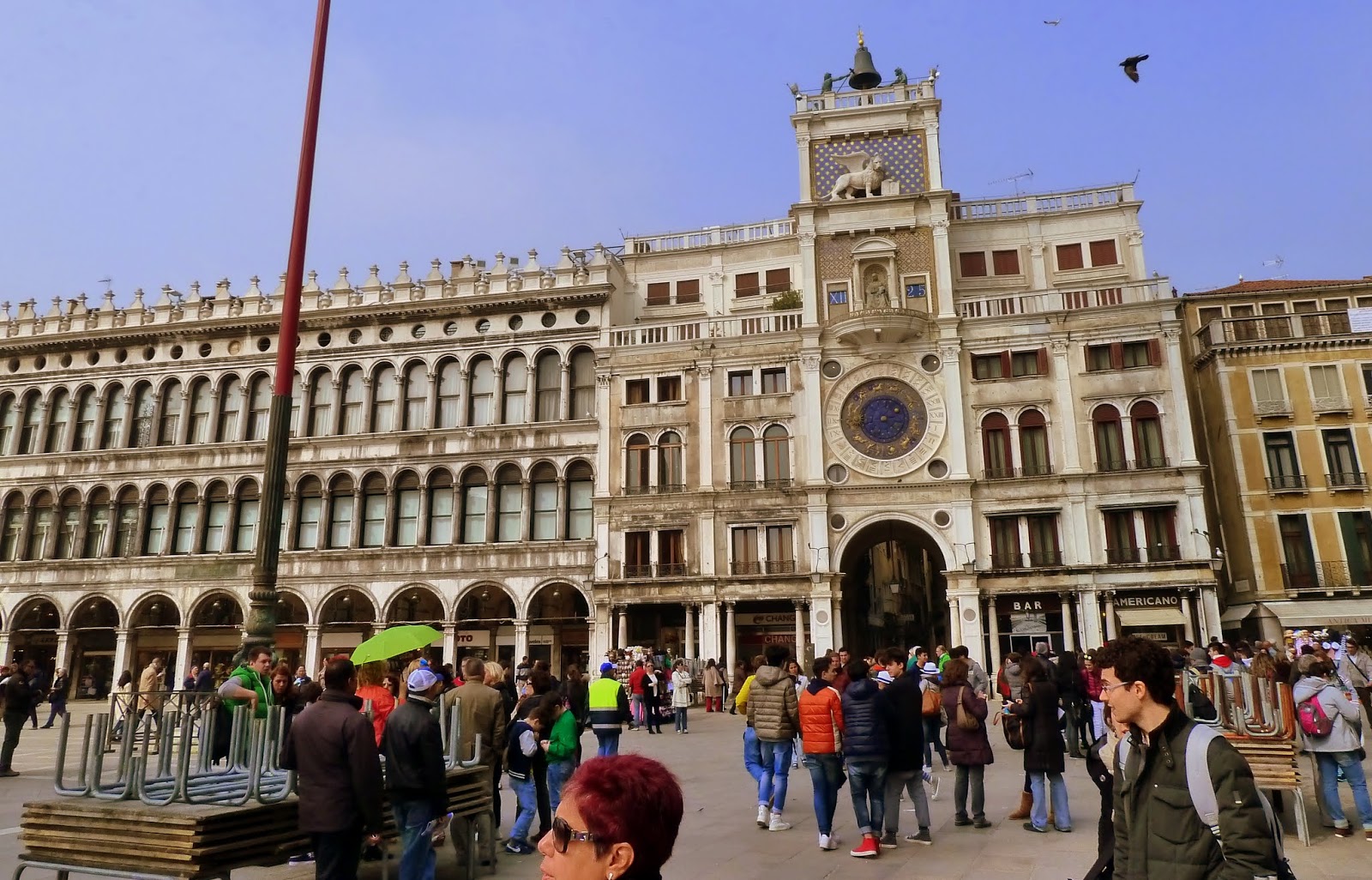 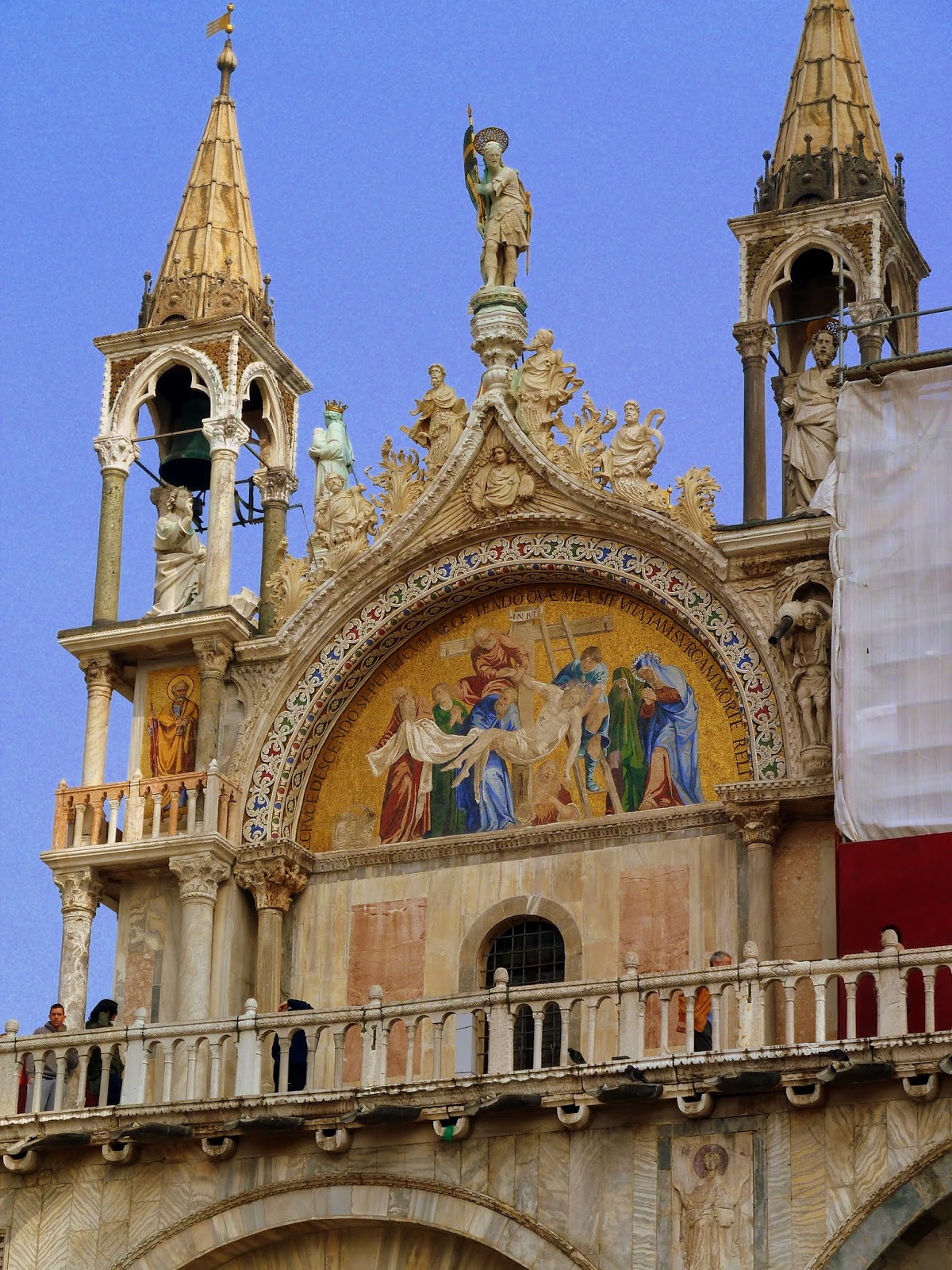 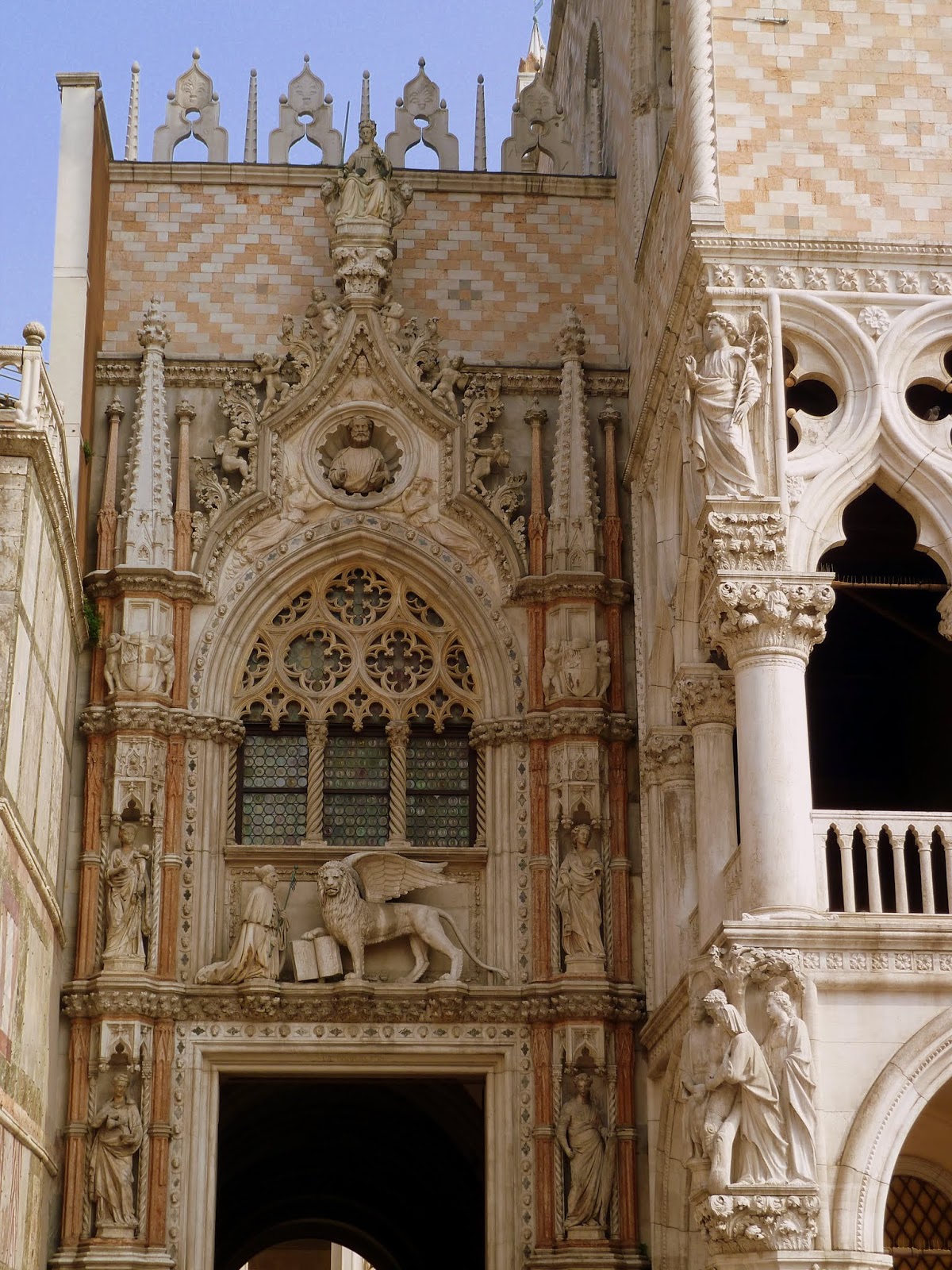 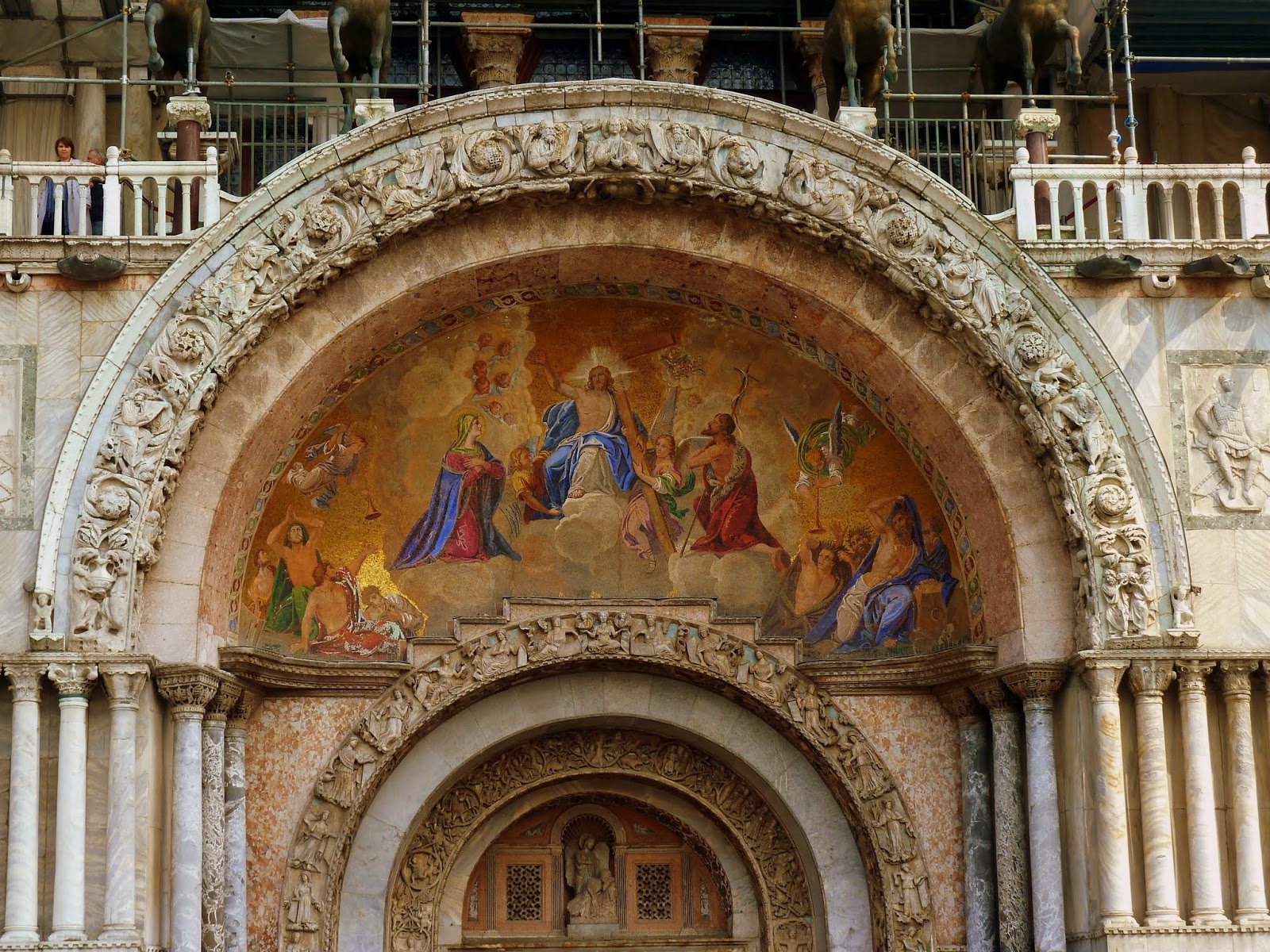 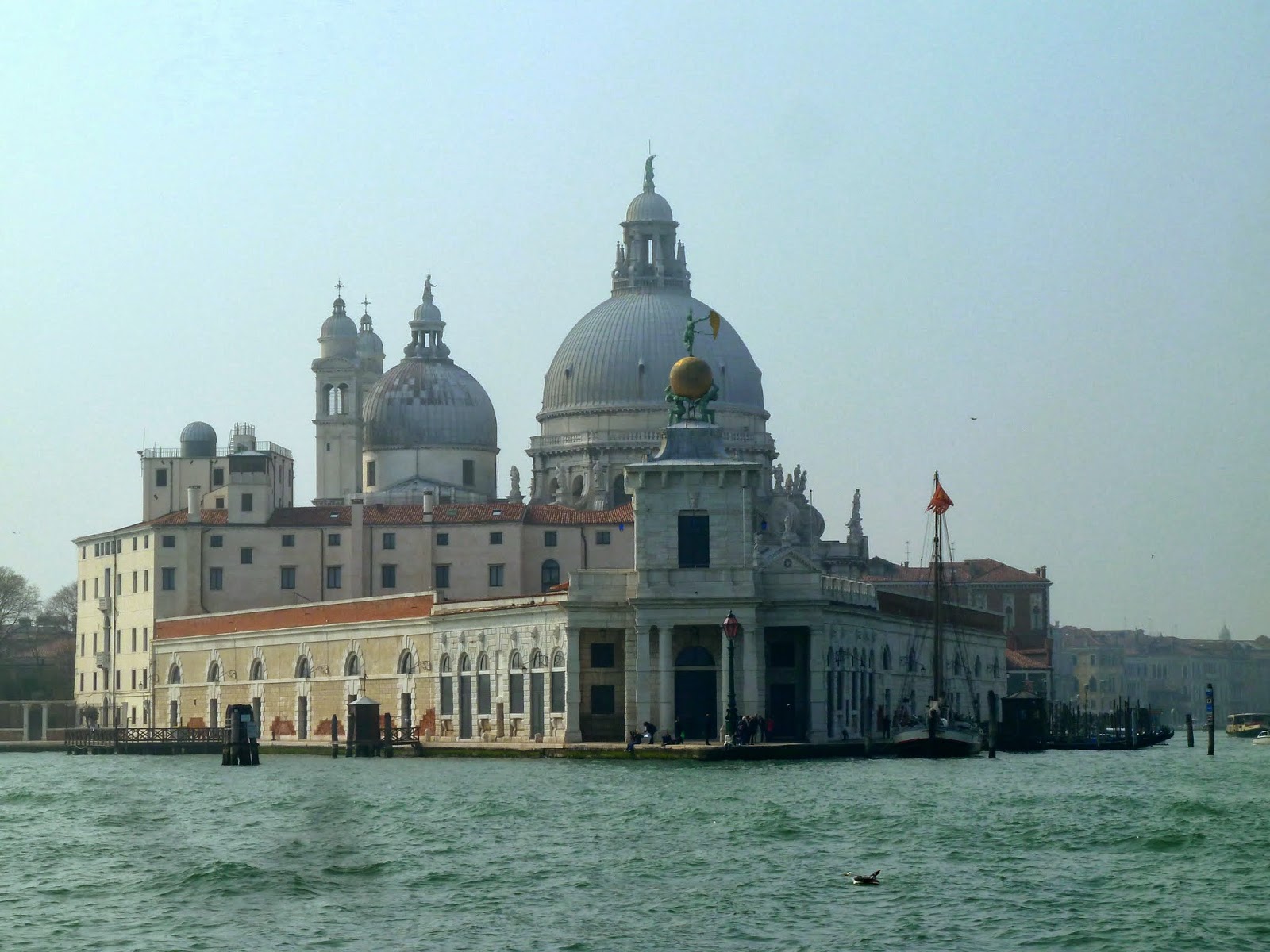 Thus ended our short stay in Verona. Nice place, well worth a visit.

Posted by Stonethrowers Rants at 2:59 AM