This post is written by HRH the Queen of Kutch.

This was our third visit to Amritsar in 4 years. A record of sorts as I don’t believe we have visited any other city as often, except of course for London.

With us on this trip was our high flying Doctor Businesswoman friend from London. Amritsar was cold. Proper cold. London cold. For the 2.5 days we were there, the temperature ranged between 3 degrees in the dead of the night to 8 degrees around noon. There was no sun to be seen at all for our entire stay and all of Amritsar played hide and seek behind a curtain of fog. Perfect weather for all the delicious Amritsar food we ate, but not really conducive to the 4.00am outing planned by Doctor Businesswoman.

While none of us are particularly religious, we have been to the Harmandir Sahib or Golden Temple several times on each visit to Amritsar and marvelled at the calm, peace and tranquillity of the Temple complex. But on none of our previous visits have we been motivated enough to wake up for the 4.00am daily Palkhi Sahib procession. This time though with a little persuasion from the Doctor Businesswoman we decided we would wake at 3.30 and make our way to the Temple to witness the procession.

After an extremely pleasant evening that began with a few civilised drinks at the lovely Hyatt Lounge Bar and wound up at the superb Maakhan Dhabba we set our phone alarms for 3.30am and snuggled into bed. 3.30 came faster than it should and by five minutes before 4am, all three of us were assembled in the hotel lobby ready to venture out into the cold. The Hyatt where we were staying kindly provides a shuttle service to and from the temple for the daily morning ceremony and I believe on some days they need to arrange as many as three mini busses to ferry all the residents who want to witness the ceremony. On this cold winter’s day though, we were the only three people brave enough to venture out in the cold. Bundled up in our jackets and mufflers, we boarded the bus and set off in the foggy dark.

At the entrance to the Golden Temple we removed our shoes/boots and handed them over the volunteers before skittering across the cold marble onto the long rough coir mats. The little water trough you need to wash your feet in before you enter the temple was not as cold as I thought it would be and within a few moments we were at the top of the steps that lead down to the Harmandir Sahib.

That first moment we saw the beautifully lit temple shining like gold in the dark pre dawn light through the veils of fog will stay etched in my memory for a long long time. It was a breathtakingly beautiful sight. Oddly at that time, a few lines of Shakespeare sprang into my head....the barge she sat in like a burnished throne, burned on the water, the poop was beaten gold....Yes, these lines were used to describe Cleopatra as she sailed down the Nile in Shakespeare’s Antony and Cleopatra, but something about the Harmandir Sahib shimmering on in the water brought these lines to my head. (I do hope I am not being blasphemous!!). The water in the Sarovar was still and clear and the lit temple was clearly reflected in its shimmering depths. 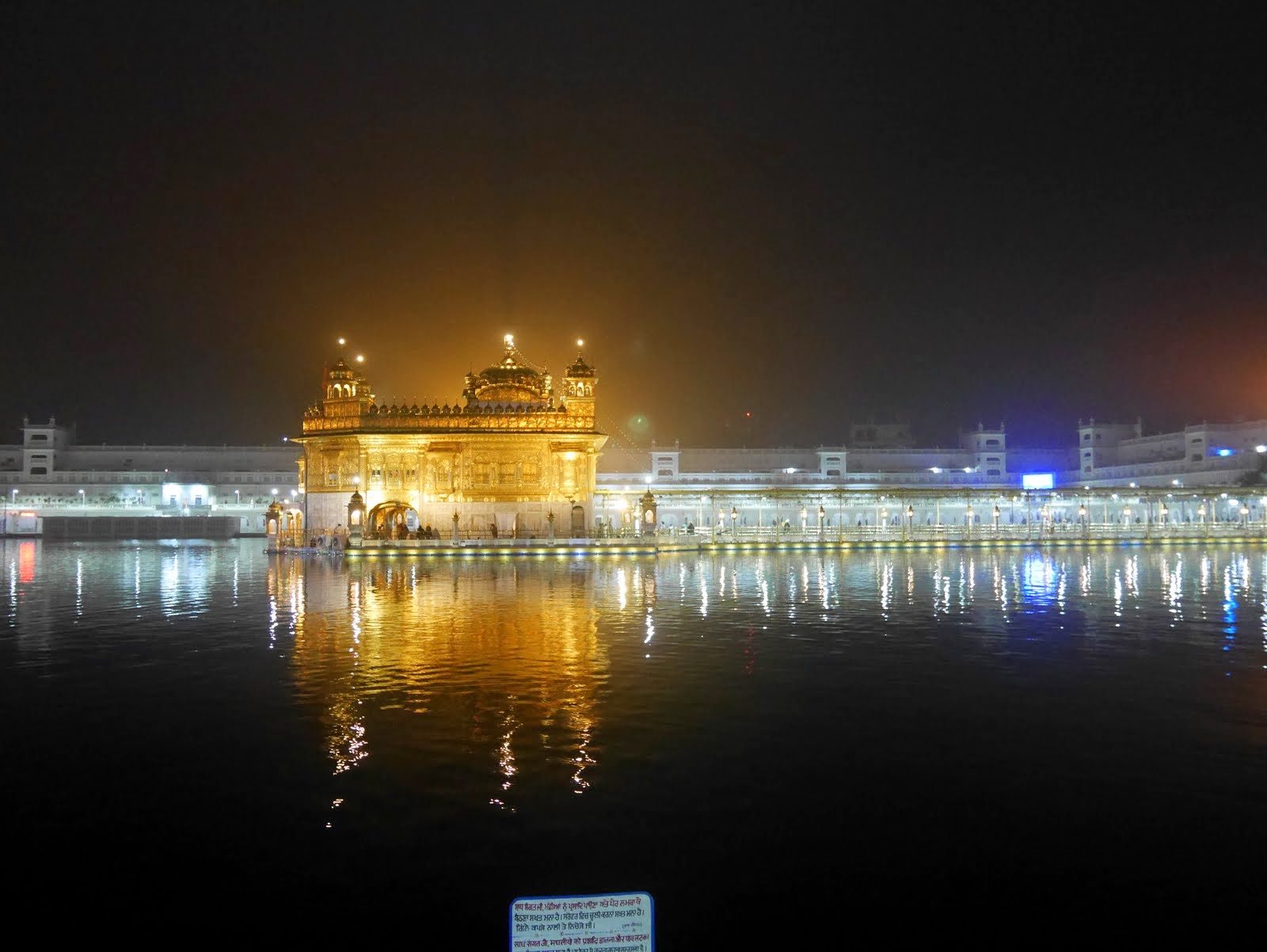 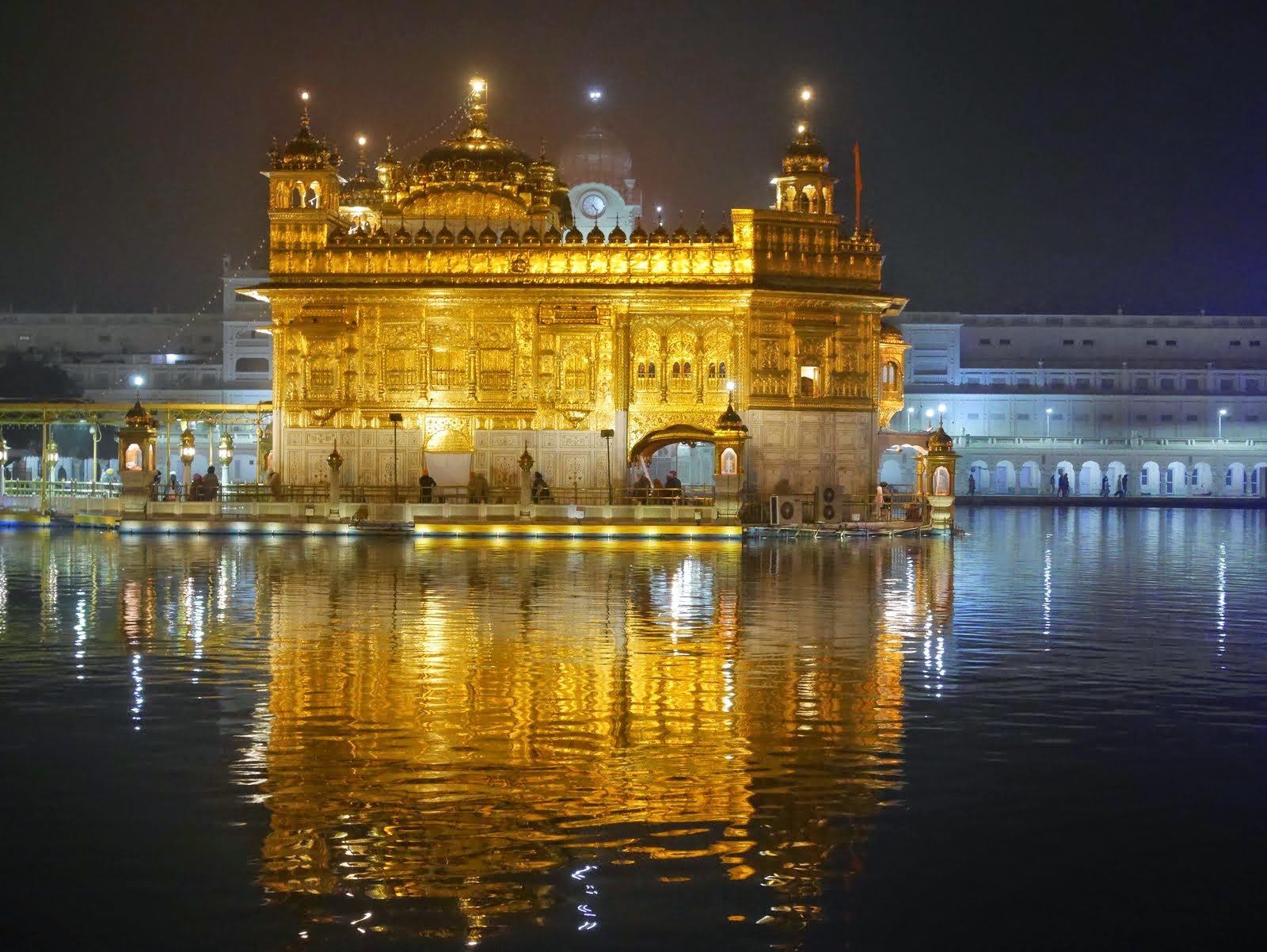 Descending the stairs we headed left to circumambulate the Harmandir Sahib and were silenced by a sense of absolute peace. There were a few people around, but the cold I believe had kept away all but the most devout and determined. By the time we reached the entrance to the Temple though, there were signs of life and activity.

Right across from the Harmandir Sahib is the Akal Takth. The Akal Takth which literally translates as ‘the throne of the timeless one’ is one of the five seats of power of the Sikh religion. Late every evening, the Holy book of the Sikhs, The Guru Granth Sahib is taken in a procession from the Harmandir Sahib to a special room in the Akal Takht where it is kept for the night. Early the next morning, there is a procession to bring the Book back from the Akal Takth to the Harmandir. This procession is called the Palkhi Sahib and it is believed to be a huge blessing to witness the procession or better still to offer your shoulder to carry the Palkhi (palanquin). Having said that, only men are allowed to offer their shoulder, so the Doctor Businesswoman and I had to be satisfied with bearing witness to the procession. 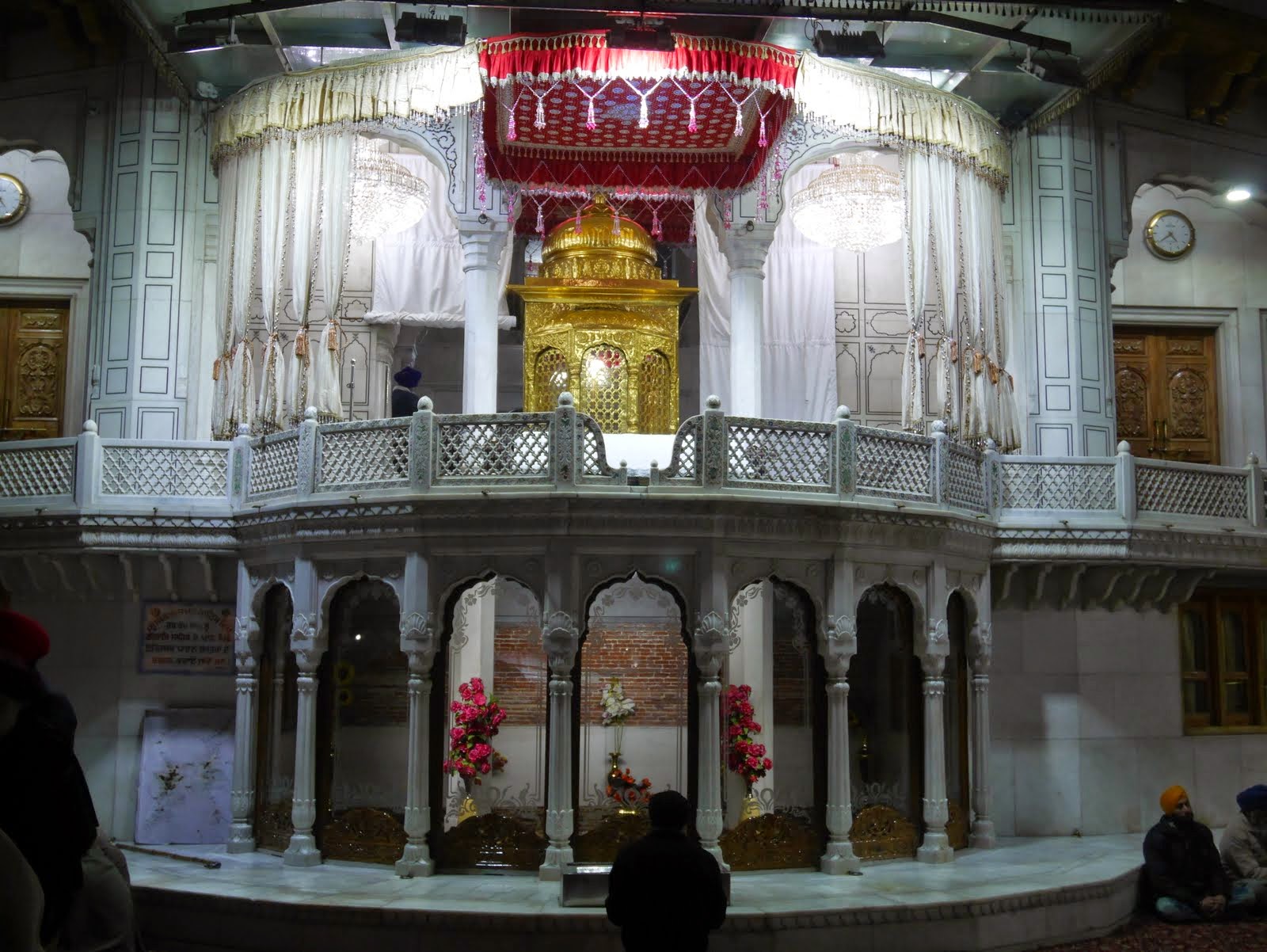 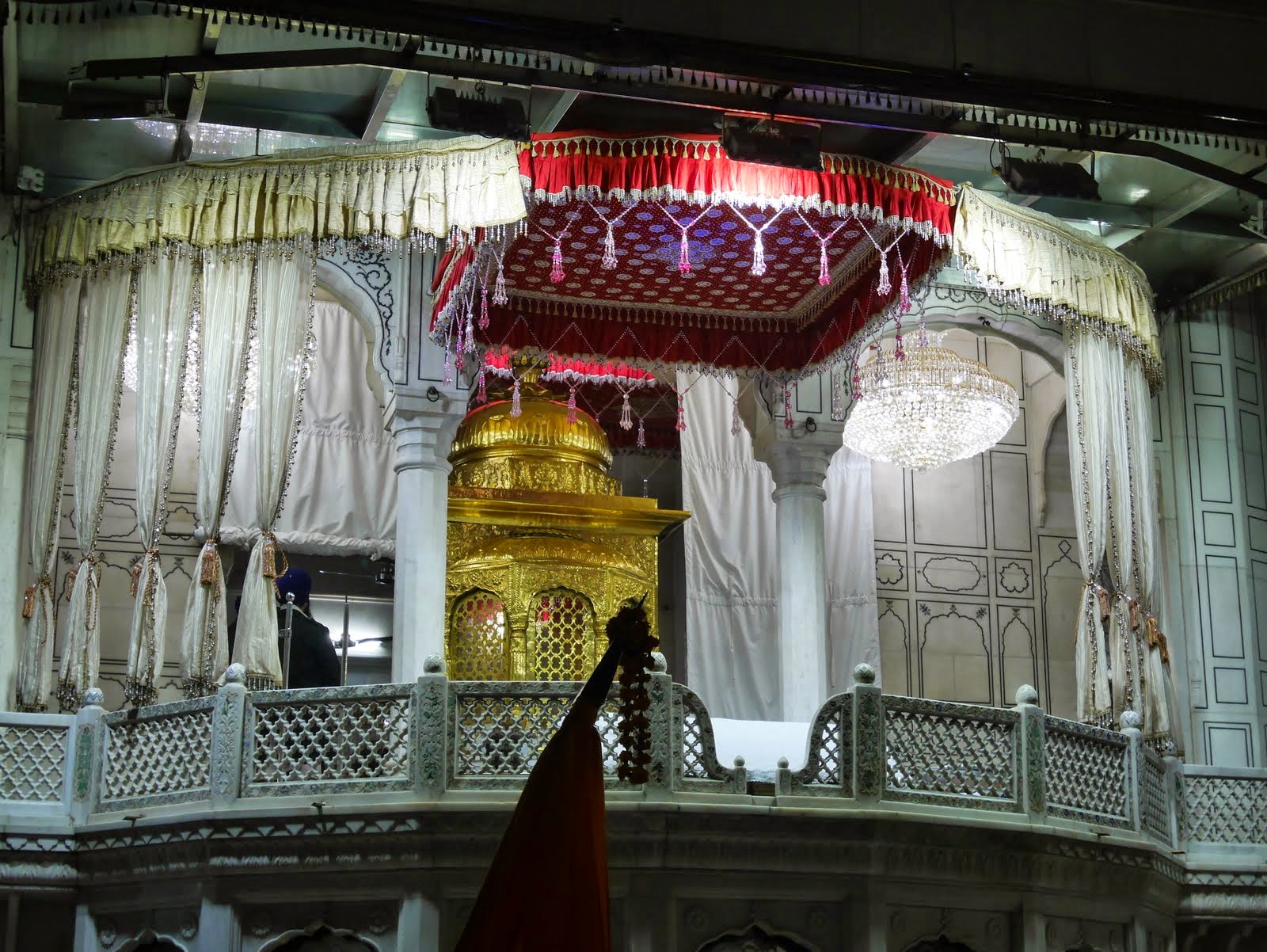 Again, since there were only a few dozen people around, we had no difficulty finding a good vantage point and stood behind the fencing watching all the preparations. Stonethrower went far forward to try and get some decent photographs.

The Palkhi was first brought out and readied. Rose Water was liberally sprayed, Marigold Garlands arranged and the beautiful silk cushions were placed inside. Then the Palkhi was carried to the foot of the stairs from where the Guru Granth Sahib would emerge. Then at precisely 5am, the head priest of the Harimandir descended the stairs from the Akal Takth with the Guru Granth Sahib on a cushion on his head. It’s all very solemn and sober till suddenly the deep resonating sound of a Nagara drum and a trumpet fill the air and the Holy Book is placed in a the Palkhi and carried to the Harmandir. At this stage there was a fair amount of shoving and pushing as many worshippers jostle for the honour of carrying the Palkhi. If this is how it is on a day when there must have been no more that 50 people, I cannot begin to imagine how it is when the place is packed to capacity. Again, we were fortunate it was such a cold day as we had a clear view of the procession which passed less than a foot from where we were standing. 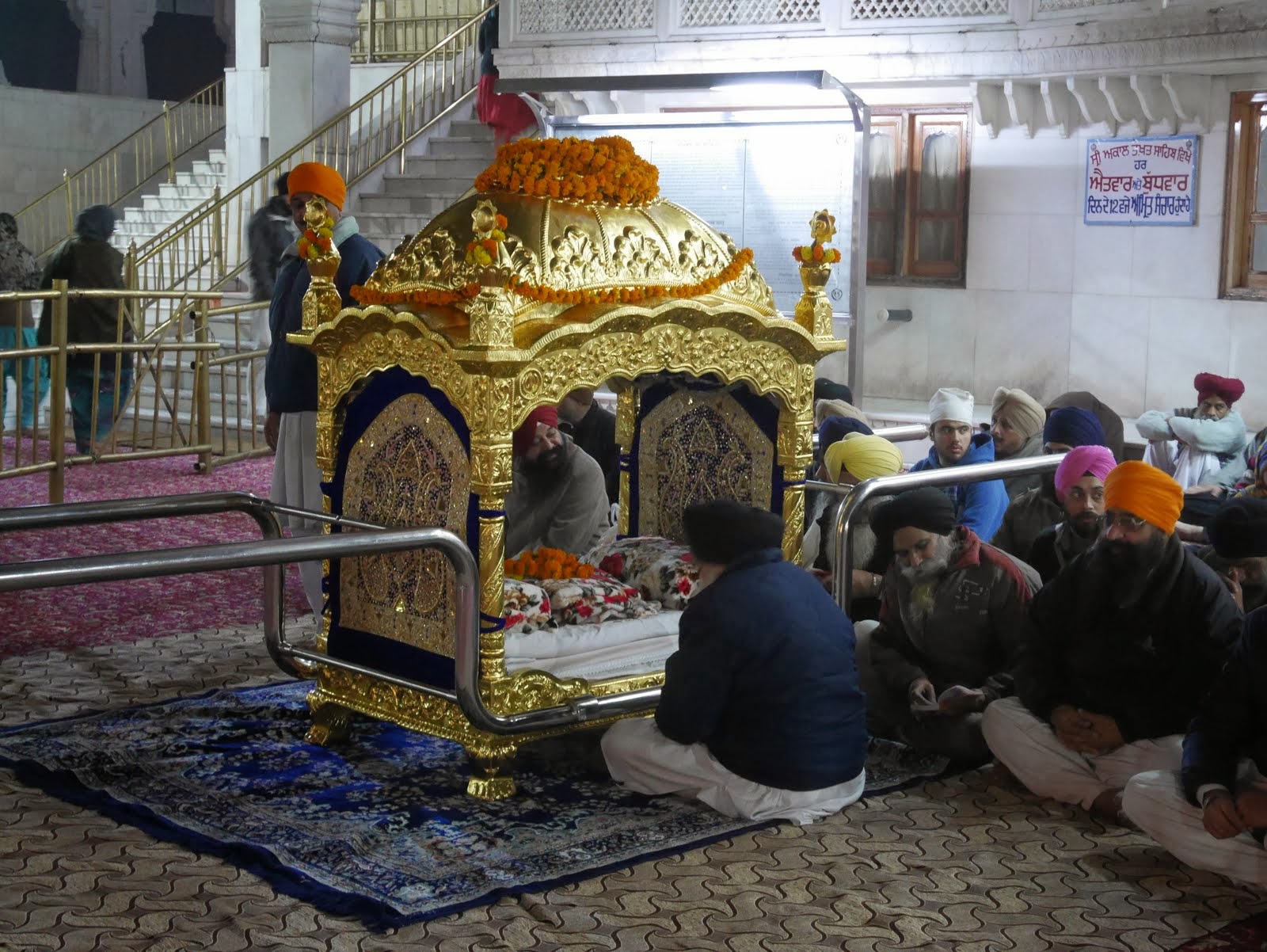 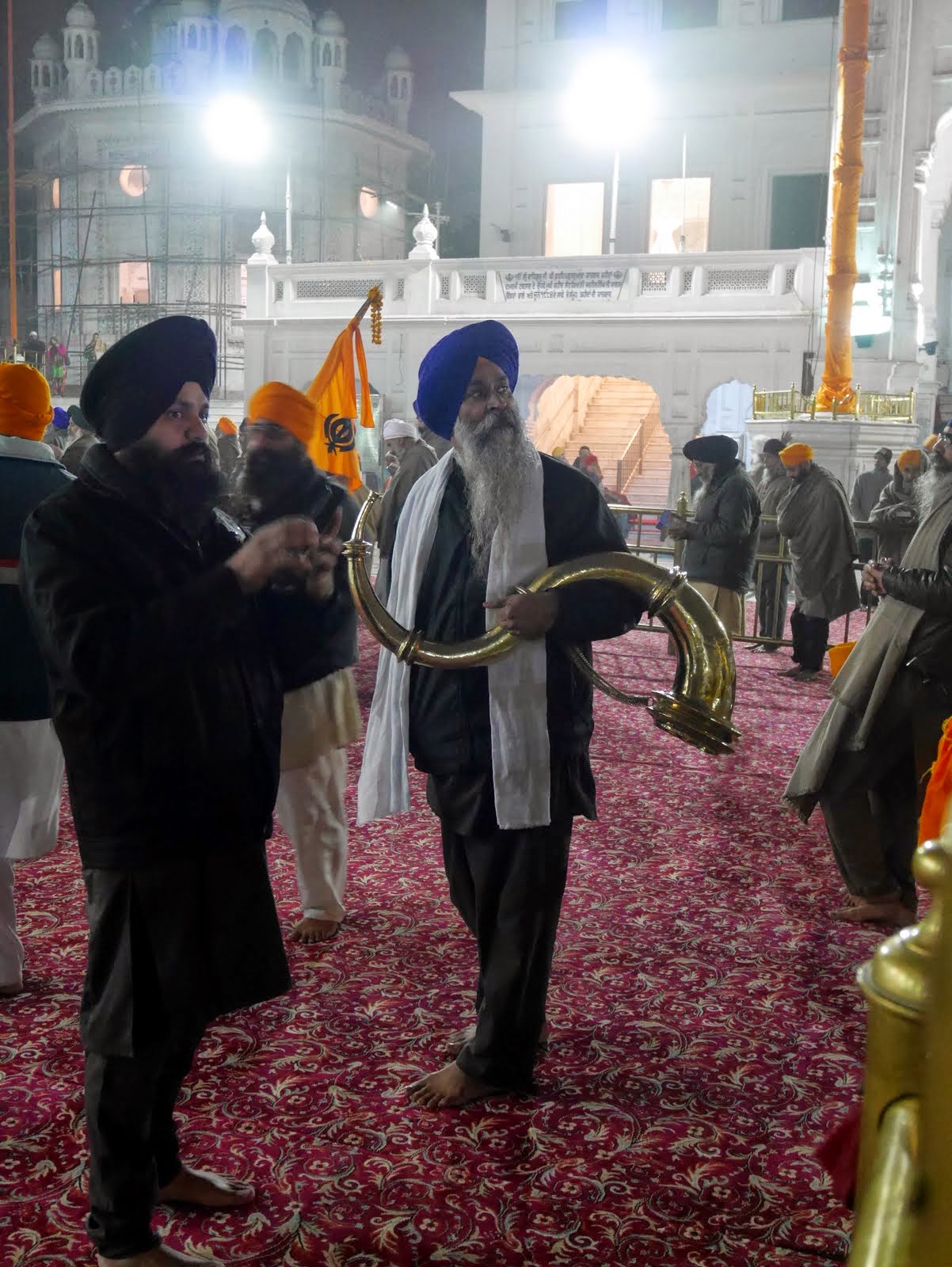 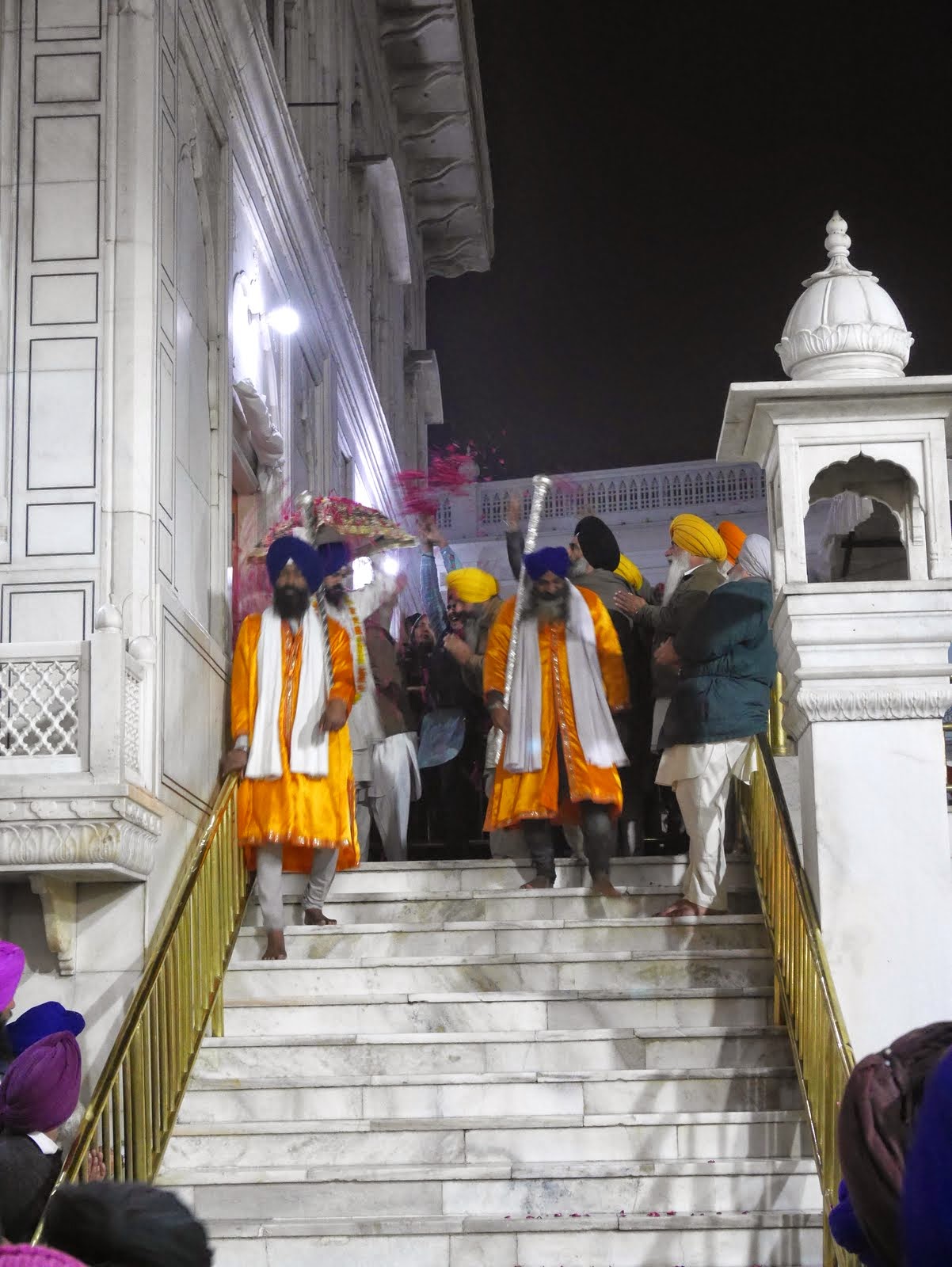 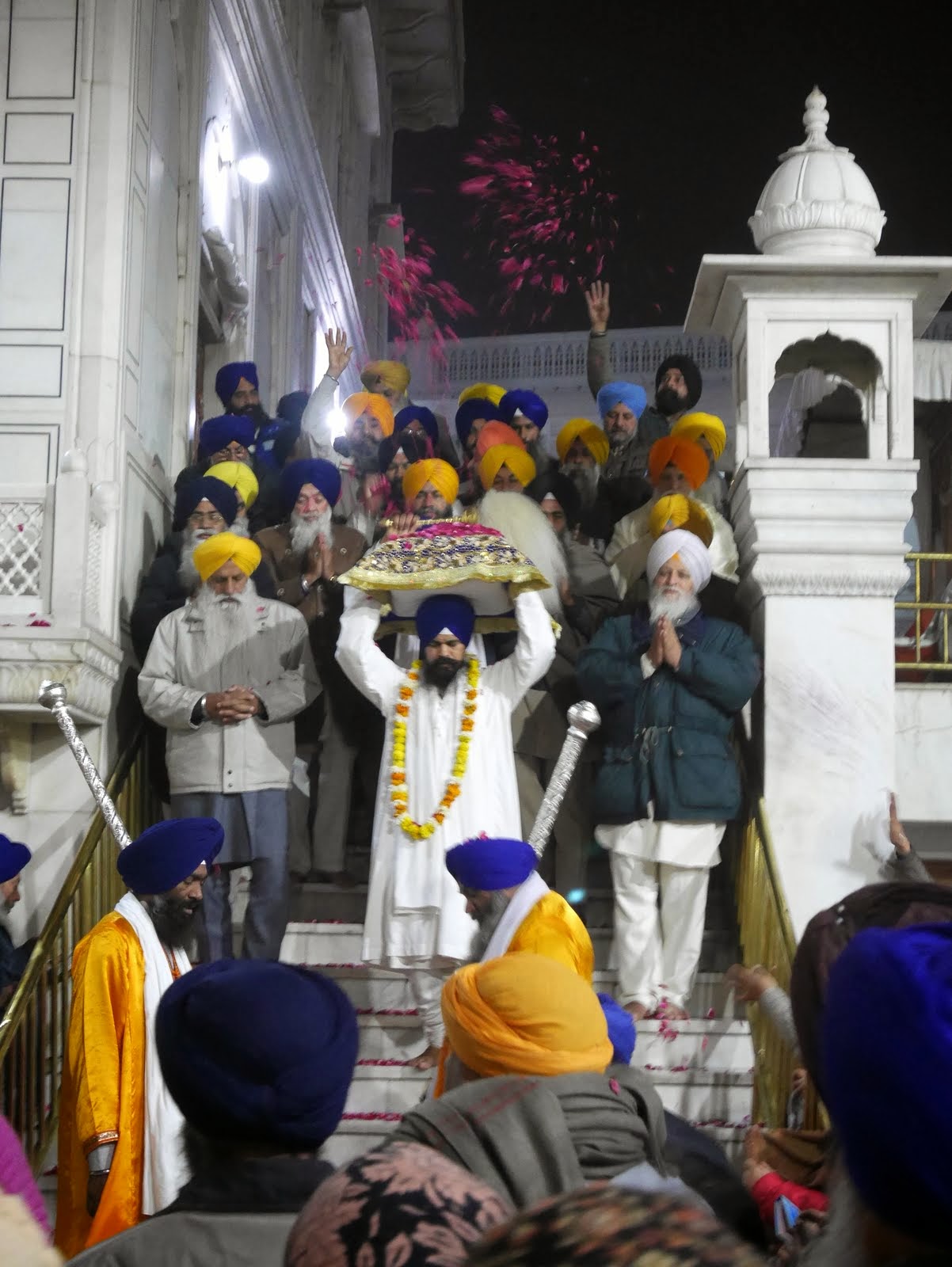 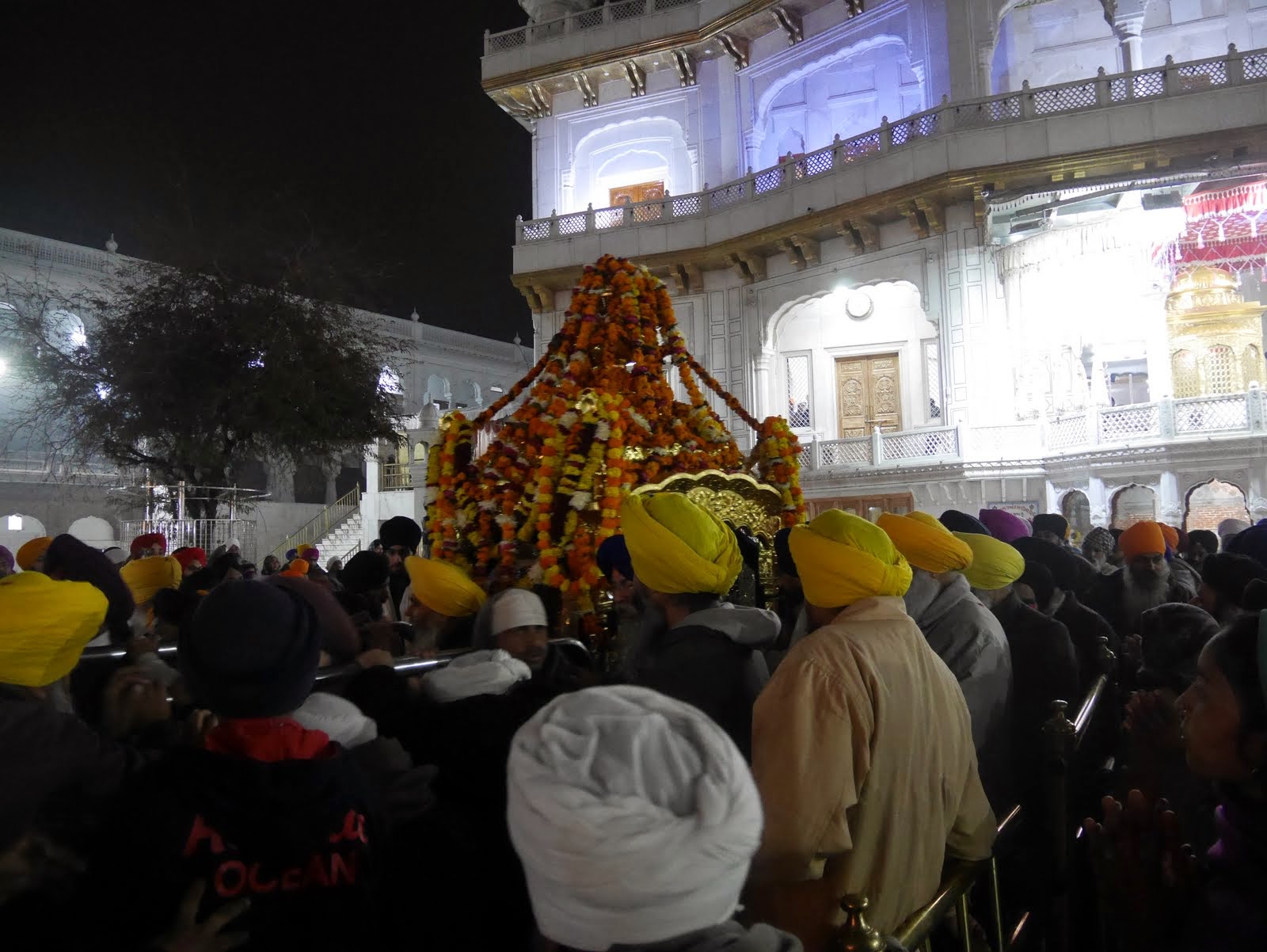 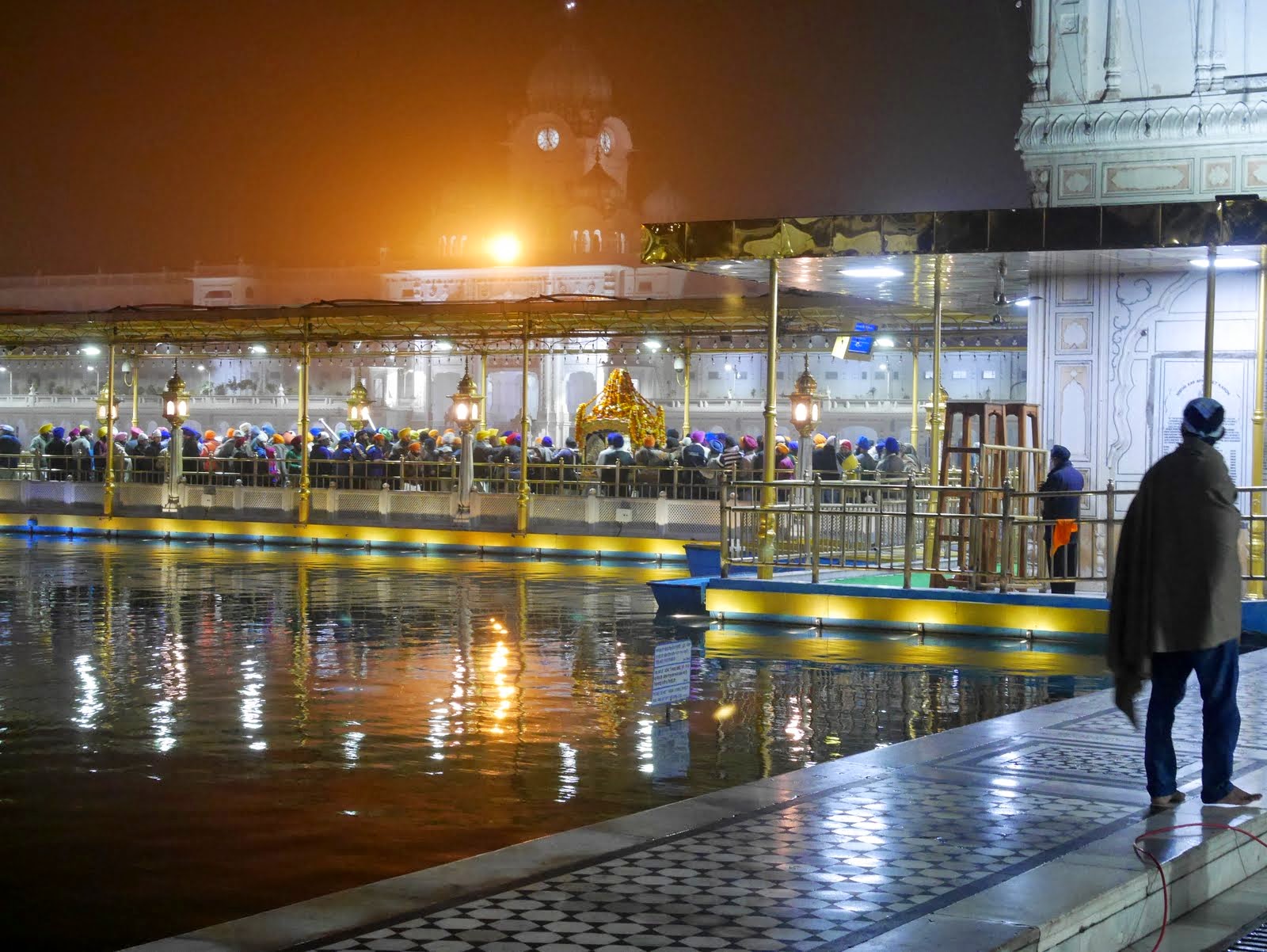 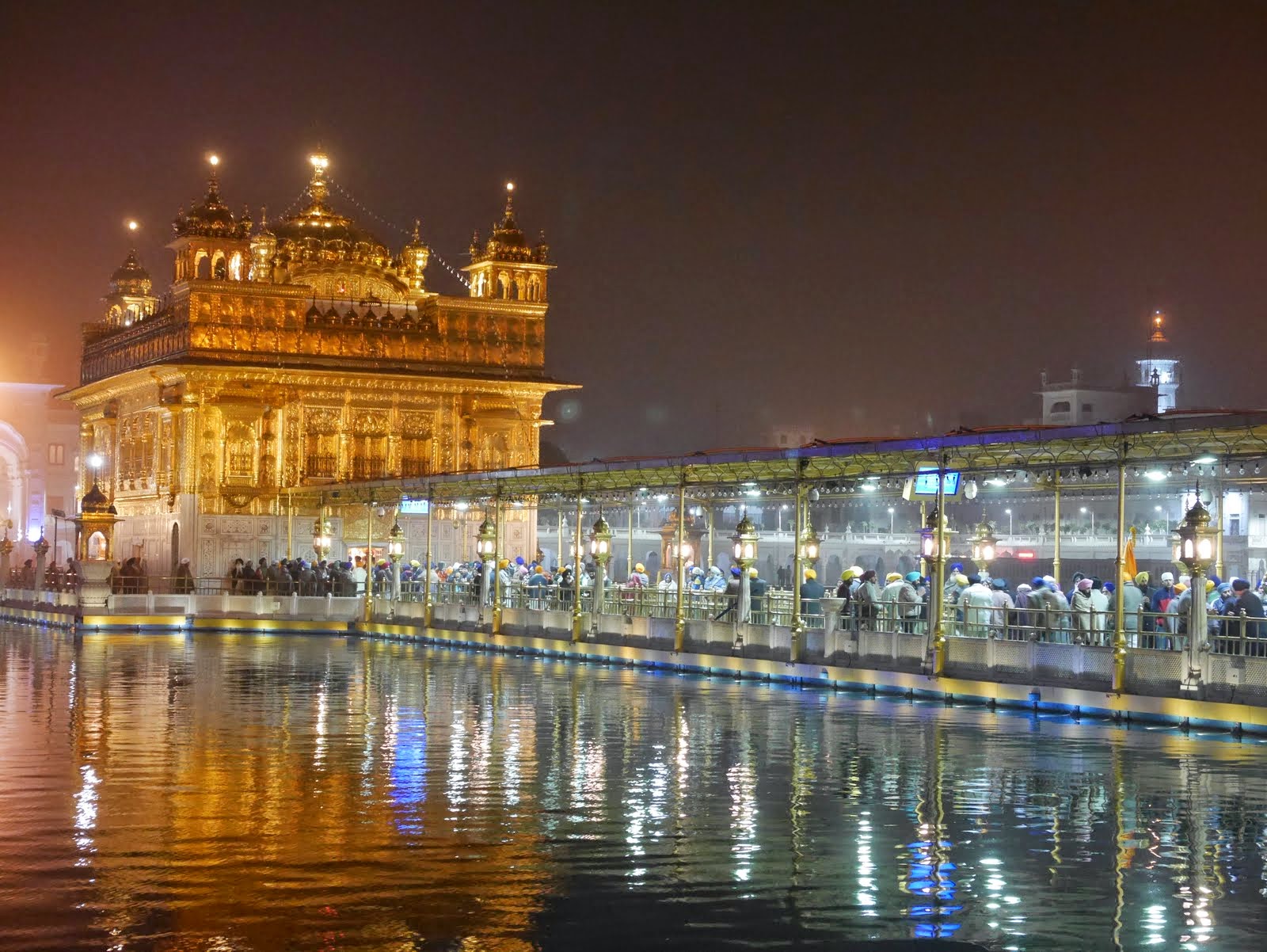 The procession solemnly moved across the plaza, through the Darshani Deorhi (main entrance), and along the causeway, stopping when it reached the main door of the Harimandir. The head priest then lifts the Guru Granth Sahib out of the Palkhi, places it on a silk cushion on his head and enters the holy shrine. 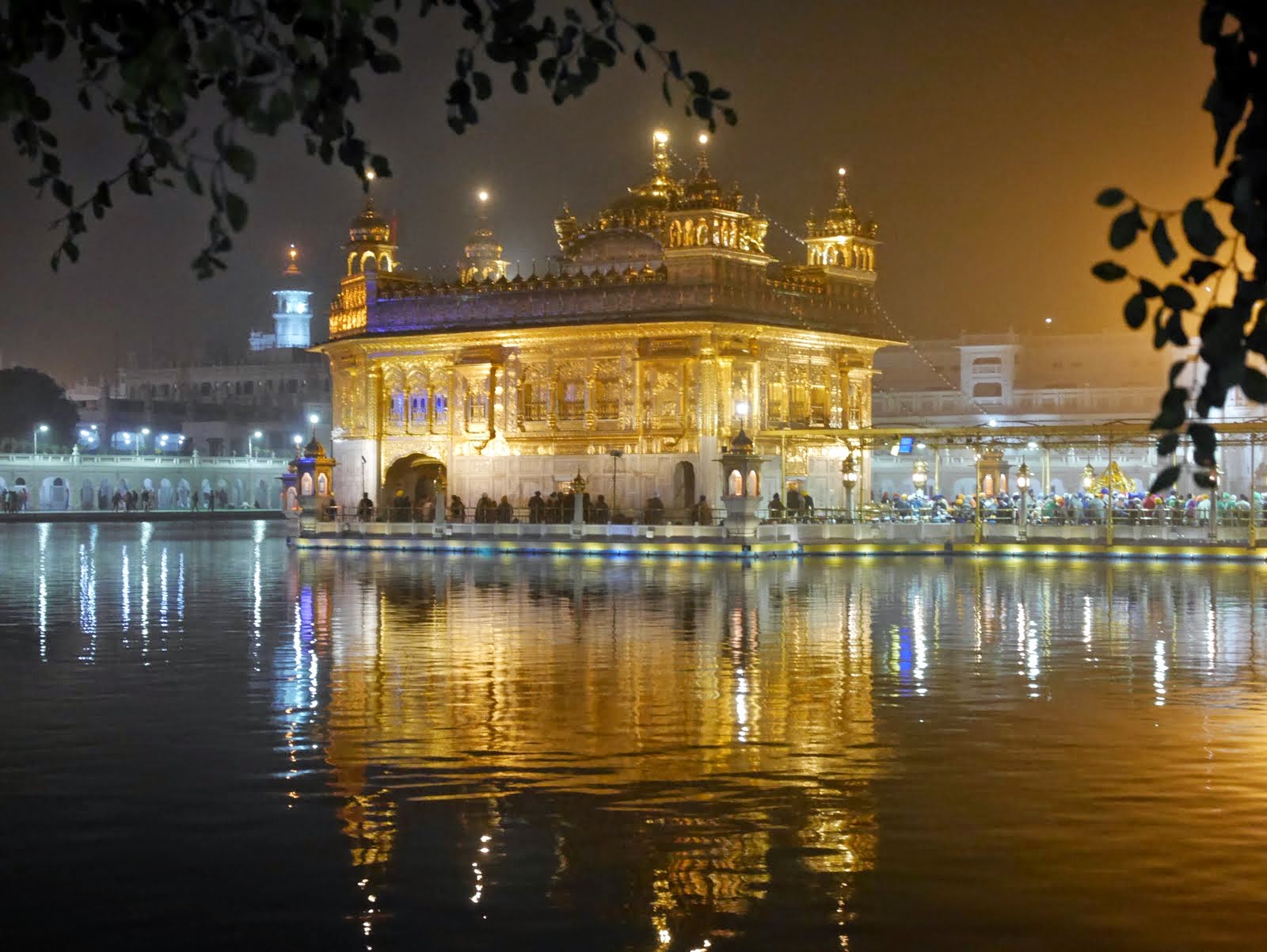 Procession done, we headed back to our Hotel and tucked our frozen toes back into bed to grab a few hours’ sleep.

A fabulous experience, not for the honour or the blessing of the procession but for the tranquillity and the magic of beautifully lit Harmandir burning upon the water....

Posted by Stonethrowers Rants at 11:27 PM