The rich, subsidies, Clubs and `cheap food'. Think about this.

You would recall the debates of a few months ago. Why should there be a subsidy on diesel? It was a national shame that a lot of subsidised diesel was used to run luxury automobiles. Thus the subsidy (i) was generally useless to those who required it, and (ii) those who could well afford to pay full price for diesel got it at a subsidised price.

This paradox is, and has been, existing with Clubs all over the country more so in the metropolitan cities where land rentals are high.

Before I go further a few disclosures and disclaimers:

2      This post is based on the RBYC as I have accurate and up to date information on hand. The principle is almost exactly the same at all the other Mumbai clubs be it the Willingdon Sports Club or the venerable Bombay Gymkhana and many others.

The Bombay Port Trust [BPT] is one of the largest landowners in Mumbai. BPT owns the land on which the RBYC is located. A Judgement of the Supreme Court has recorded some fascinating facts, which I am taking the liberty of reproducing here. If you would like to read the entire Judgement click here.

“The Bombay Port Trust Estate, admeasuring around 720 hectares (1800 acres approx.) of land is a huge stretch from Colaba to Raoli Junction, including Pir Pau, Butcher Island, land at Titwala and other islands. The population is highly urbanized and dense. Out of the total area of 720 hectares the area under the jurisdiction of Estate Department of the BPT is around 336 hectares. Out of these, 306 hectares of area is occupied by the lessees of BPT holding leases of various tenures.

There were about 600 lessees. The lessees could broadly be divided into three categories – monthly or annual lessees, 15 years’ terms lessees, and 99 years’ or long term lessees, with or without clauses for renewal.

In case of monthly or annual leases, the municipal taxes are borne by the BPT, while in cases of 15 years term and long terms leases, the liability to pay municipal taxes is with the lessees. The BPT Estate cannot be sold; it is all held out on leases excepting for the land in the use of the Port and for Port activities i.e. for the self requirement of the BPT. Leases were created long back, some of which being around a century old.

In the year 1962, the World Bank advised BPT that its rate of return on its real estate was hopelessly inadequate and needed to be reviewed. The Comptroller and Auditor General of India too, in his report of the year 1979-80, shared the opinion of the World Bank and highlighted the obligation on the part of the trustees to secure a fair and reasonable revenue for its estate so as to attend better to its manifold public duties.

When the private landlords are making money in the commercial capital city of Bombay, there is no reason why the Bombay Port Trust should be kept pegged down to abysmally low rates of rent which were settled decades before and at a point of time when in Bombay the land was available for occupation more or less like just a bounty of nature and people were being persuaded and encouraged by holding out incentives to come to Bombay and settle there. He submitted that the Bombay Port Trust has to manage and administer a huge port, most vital to the industrial and economic life of the nation, and it needs money for funding its activities. Every additional penny earned by Bombay Port Trust has to be and is spent for public good and the increase in rent would augment the resources of the Bombay Port Trust and thereby strengthen its hands in rendering better service to the nation.”

The President of The RBYC has just sent a circular where he says that the Club is now paying Rs 1,79,544.46/- as lease rent per month. Do read the circular especially the highlighted portions. You could download the circular by clicking here. 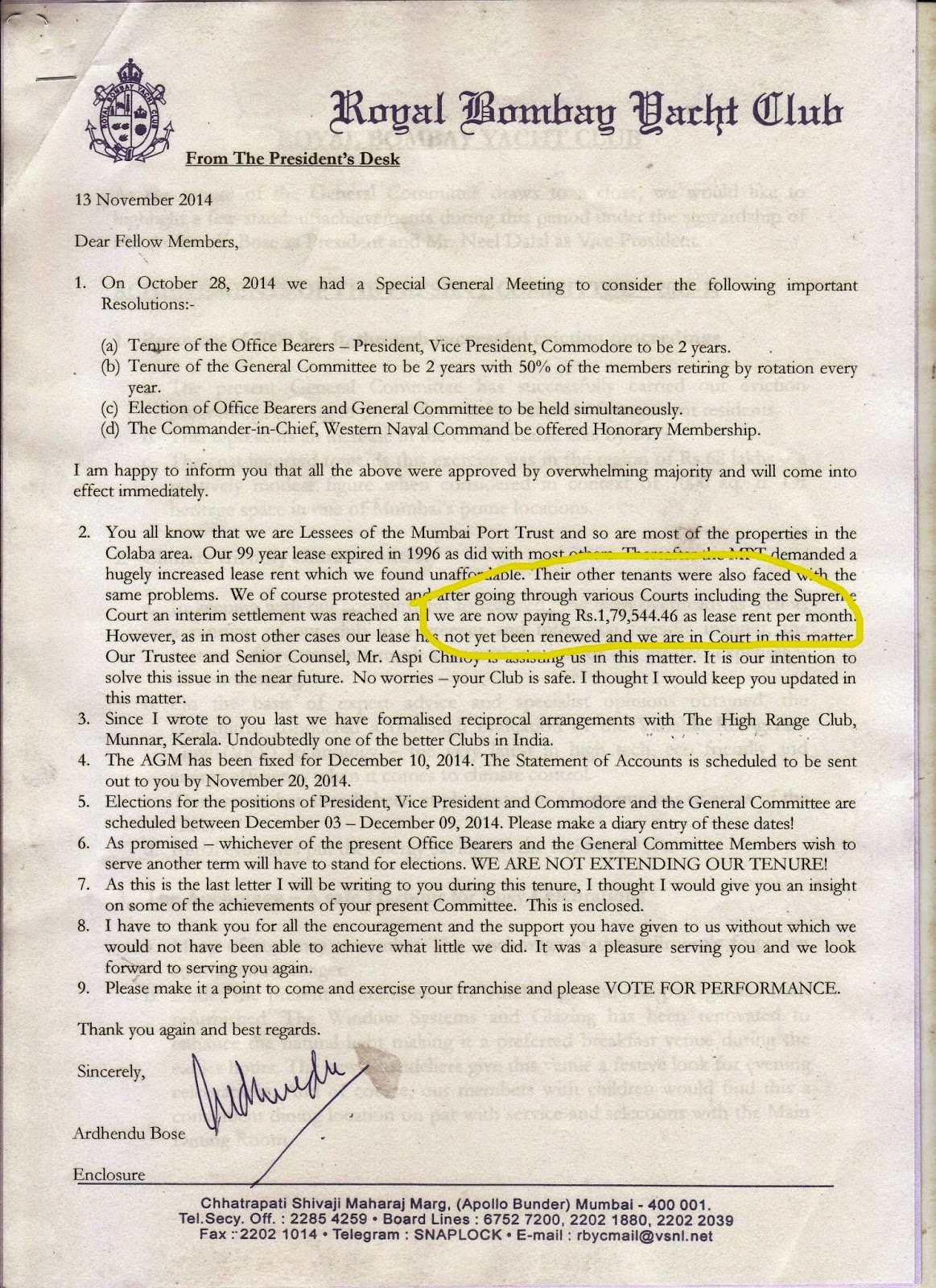 This is for lease of the land on which the Club building stands. The Club is a building of Ground plus five floors with a floor area of 7000 sq feet per floor which totals 42,000 sq feet. I am assuming that the size of the land would be 2 ½ times the size of a floor so it would be approximately 17,500 square feet. A simple back of the envelope calculation will reveal that the lease rent for the land is a paltry Rs 10.25 per sq foot per month. If one were to take the area of the building the rent is an equally paltry Rs 4.27 per square foot per month. Rents for commercial space at Nariman Point are anywhere between Rs 150 – Rs 250 per sq foot per month. This, of course, is for built up space not land. My point is mentioning all this is to give you some kind of idea of how utterly unrealistic is the rent the RBYC is paying to the BPT.

Mind you, I must point out that the RBYC probably has the smallest leased land among the Mumbai clubs. The Cricket Club of India, the venerable Bombay Gymkhana, the Hindu, Islam and Parsee Gymkhanas all have cricket fields, tennis courts, and, much larger grounds. The Willingdon Club has a golf course for God’s sake! The Royal Western India Turf Club has an entire horse racing track. The Breach Candy Club has large lands and pools. The land owners in these clubs is probably the Collector of Bombay or the State Government and not the BPT. But just think about how much land is involved and how paltry the rents are. Also remember, members in all these clubs are India’s richest individuals. At the Turf Club you could count the Singhanias the Jains of Bennett Coleman, the now not so rich Dr Vijay `Willful Defaulter’ Mallya, Dr Poonawalla and other horse owners as members.

The Club inducts new members at Rs 12 lakhs as shown on their website. I do not believe the poor and downtrodden are becoming members at this rate even though, as members, they will get ‘cheap’ food and drink. Rooms are let out at rates between Rs 3000 – Rs 6000. So, letting out a single room for Rs 6000 for an entire month garners the RBYC more revenue than the lease rental for the month for the whole premises. You could have a look at their website by clicking here.

When an organisation pays rent which is unrealistically low, its running costs are obviously low. Therefore, the food and drink served is regarded as ‘cheap’. There are 2 reasons why it is ‘cheap’. Firstly, because the rents are unrealistic and, secondly, the Club does not operate for profit, but charges its members just enough to cover costs. I must also point out that the entrance fees paid at the time you are admitted as a member are capitalised by clubs. So, today Clubs have healthy a corpus which is invested resulting in decent interest income. This too helps offset costs.

You may well ask what does `cheap’ mean. Let me give you just two examples. A standard Kingfisher beer 330 ml will cost you inside Rs 95/- at the RBYC. The same beer will cost you Rs 200 at Toto’s Bar at Bandra one of the `cheaper’ bars in Bombay. Though I doubt any of the Godrejs would grace Toto with their presence but would surely quaff a beer or two at the RBYC. A Sada Dosa at the Bombay Gymkhana costs Rs 35/- and the most expensive a Cheese Masala Dosa costs Rs 60/- I checked the menu just this morning. A Masala Dosa would cost you Rs 55/- at Poornima, an Udipi restaurant in Fort [non air conditioned and self service complete with `finger paani’]. A two egg plain omelette costs Rs 30/- at the Bombay Gymkhana while the most expensive is the Cheese Omelette at Rs 40/- These are really cheap, as cheap as at an Udipi restaurant. Would any of our rich and famous Bombay Gym or RBYC members eat at an Udipi that is full priced, albeit, at the same price as a subsidised Club? No. But they are happily chomping down hugely subsidized Dosas and eggs in the classy environs at the Club.

Once you have read the prices I am sure you are not feeling too happy about the dinner your pal treated you to at the Club. It was equivalent to taking you to an Udipi for the amount he spent!! Probably, without doubt the cheapest booze outside of home.

So, on the one hand, we rich members enjoy the privilege of ‘cheap’ food and drink, the Bombay Port Trust and the Collector of Mumbai which renders service to our country has to suffer and get a paltry return for its lands. If the Government raises taxes to build or maintain infrastructure we all crib and make all kinds of intellectual arguments ranging from the ludicrous `Mumbai should keep the taxes it pays for its own development’, to `paying taxes is such a waste, it is only used in government salaries’. So paying taxes is a pain for us even though we are often the very same people who have caused the Government to fall into neglect.

You may well be outraged by my trend of thought and say that clubs are not only about `cheap’ food and drink. Really? Do have a look at any clubs accounts. The biggest revenue is from food and drink, never sports for which the club got its original land on a cheap lease.

Can you imagine [other things being equal] if the Bombay Port Trust received realistic rents how good our port infrastructure could be? All of us who are members of these ‘elite’ clubs can easily afford to pay more, far more, for the food and drink at the clubs we go to. I am not suggesting here that Clubs suddenly become profit centres, but surely paying commercial or realistic rents and appropriately charging members who can afford the charge is only but fair.

Why should a Club which has, and takes pride in having, Members who are the elite of society not pay commercial rents to a Government?

Makes no sense to me. Maybe I am missing something here. But then, I am only a minority, a miniscule minority willing to pay full price for what I can afford.

You may well ask me what my position is. Well here goes:

I am sure there will be many counter arguments to this blog, and I would really like to see other point of view on this. Do post your views.


Posted by Stonethrowers Rants at 4:32 PM