This blog is written by HRH The Queen of Kutch.

Let’s be honest, there are not many reasons one would voluntarily visit Vadodra, or for that matter, any other city in Gujarat. Sure, a visit to the Rann of Kutch is on the cards and, maybe, at a pinch the Gir Forest. And, since temple hopping is not my thing, Gujarat really held no fascination for me for all these years. Yes, the ‘development model’ of Gujarat has been hotly debated in the recent past as have the horrors of Godhra. No, Gujarat was not high on my to-do list by a long mile.

But, life suddenly threw a curve ball and I found myself in Vadodra with the best part of the day to kill on my own. And what a day of discovery it turned out to be. Unexpectedly, one of the best days I have had in a long while – perhaps because there were no expectations. 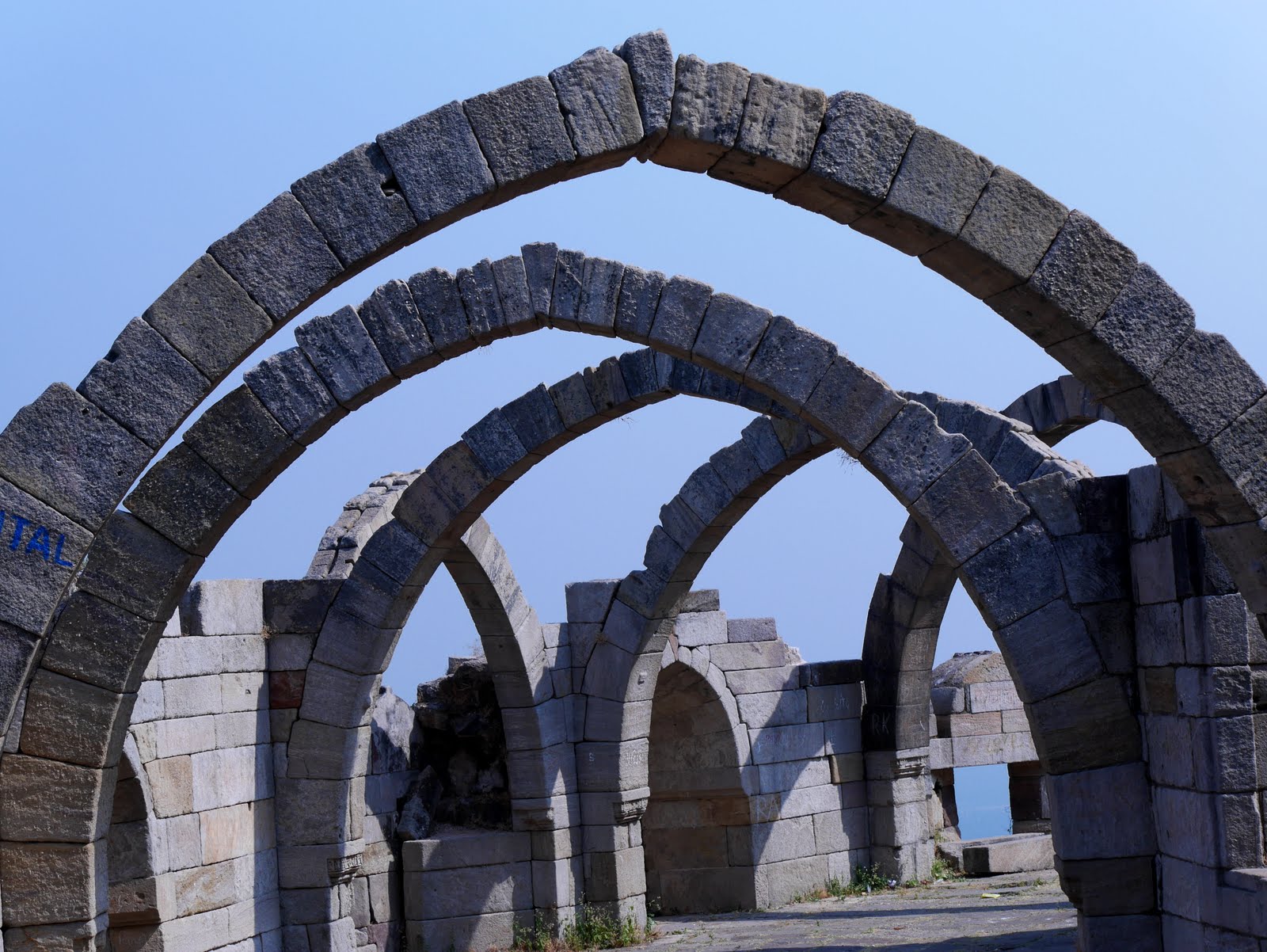 Armed with hastily scribbled notes after a quick hour of scouring the internet, I set off for Champaner Pavadagh Archeological Park, 50 kms from Vadodra that has in the recent past, risen like a phoenix. Champaner is a large sprawling area at the base of Pavagadh Hill. Both are dotted with monuments, forts, mosques, step wells as well as Hindu and Jain temples.

The history of Champaner is fascinating. Founded in the 8th Century during the Chavda dynasty, the name Champaner is often attributed to the limestone rocks of Pavagadh, whose light yellow color tinged with red gives the appearance of the champaka, or “flame of the forest” flower. The city and Champaner and the surrounding hills of Pavagadh were seen as strategically important and were soon captured by the Rajputs who ruled Champaner for over 200 years. Several Sultans attempted to capture the Kingdom of Champaner but it was all the way in the 14th Century Mahmud Begada who succeeded, after laying siege to the city for twenty months. He renamed the city Muhammadabad, made it his capital and spent 23 years renovating and enhancing it. He painstakingly rebuilt an entire city at the foothills of Pavagadh.

Champaner’s time as capital was not long, however, as the Mughal Emperor Humayun conquered the city in 1535 and moved the capital back to Ahmedabad.

For the next four centuries, the city was in a decline and when the British took control of the area in beginning of the 19th century, the city was almost completely overgrown and practically reclaimed by the surrounding forests with a population of only 500.

It is only in the last 20 odd years that the site received attention by archaeologists and Heritage Trusts working in the area to develop it into a tourist attraction and a World Heritage Site. In July 2004, UNESCO inscribed the site on the World Heritage List with the justification of its “joint significance as a living Hindu pilgrimage centre, its cluster of Jain temples, its remarkable preserved medieval urban fabric, its exquisite sandstone-carved mosques and tombs and its intangible heritage values.”

The drive from Vadodra to Champaner was an absolute pleasure. Superb roads, minimal traffic and from what I could see, fairly decent signage. Gujarat model? The roads were infinitely better than the tracks we have in Mumbai.

It was about 11 am and looking at the time, I decided to first visit the Pavagadh hill and finish my uphill trek while it was still relatively cool, before I explored the plains of Champaner.

The Pavagadh hill composed of reddish-yellow coloured stone formation is one of the oldest rock formations in India. The hill rises to a height of nearly 800 m and is home to the 10th-11th century temple dedicated to Lakulisa. Today, all that is left of the temple is the sanctum sanctorum and a small foyer, but it remains a major place of worship.

I had the option of walking up from Champaner to Pavagadh which would have taken me a couple of hours or take the ropeway which would get me up in a mere 6 minutes. I decided to take the ropeway up and then walk on the way down. To say I had my heart in my mouth on the way up is an understatement. The incline is very very steep. The squeaks and creaks and groans of the cables were disturbing and having my fellow passengers talk about the major accident a year ago made me think twice about my decision. But, God is Great and I got to the top in the scarily long 6 minutes.


Unfortunately, there was nothing to really catch my eye once I got there, except for lines of tacky stall selling knick-knacks and soft drinks and scores of worshippers walking barefoot to the Mahakali Shaktipeeth some 250 steps up from the plateau where the ropeway dropped me. A few quick photographs and I was ready to run away. Not quite the start I had hoped for and my spirits sank imagining of what lay in store for me in Champaner. 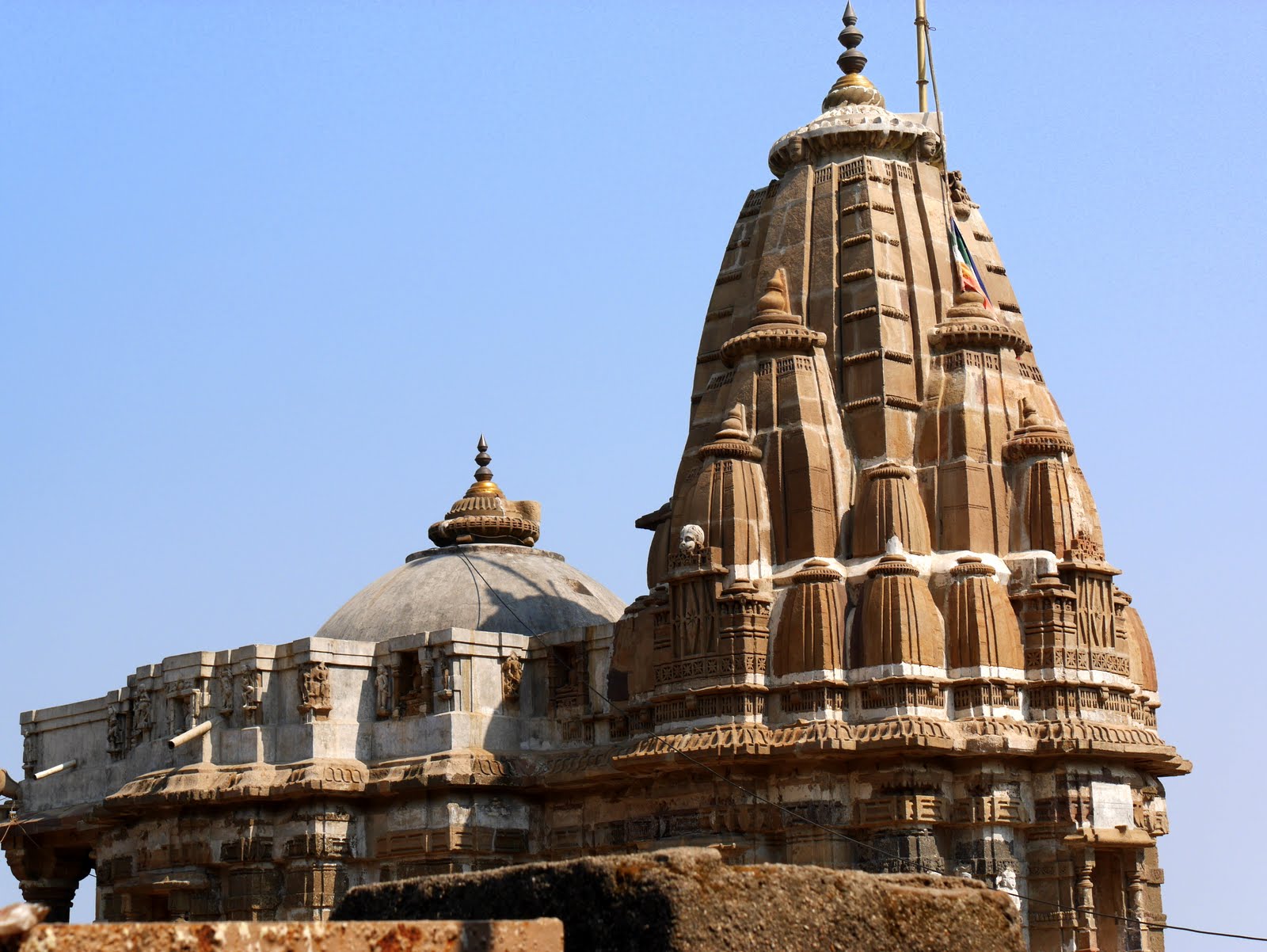 However, halfway down the hill I came upon the magnificent Saat Kaman and my spirits soared. Saat Kaman or Seven Arches is an inexplicable thing of beauty in the middle of absolutely nowhere. No signage, no indicators and no people. If you aren’t looking for it, you will never know it’s there. 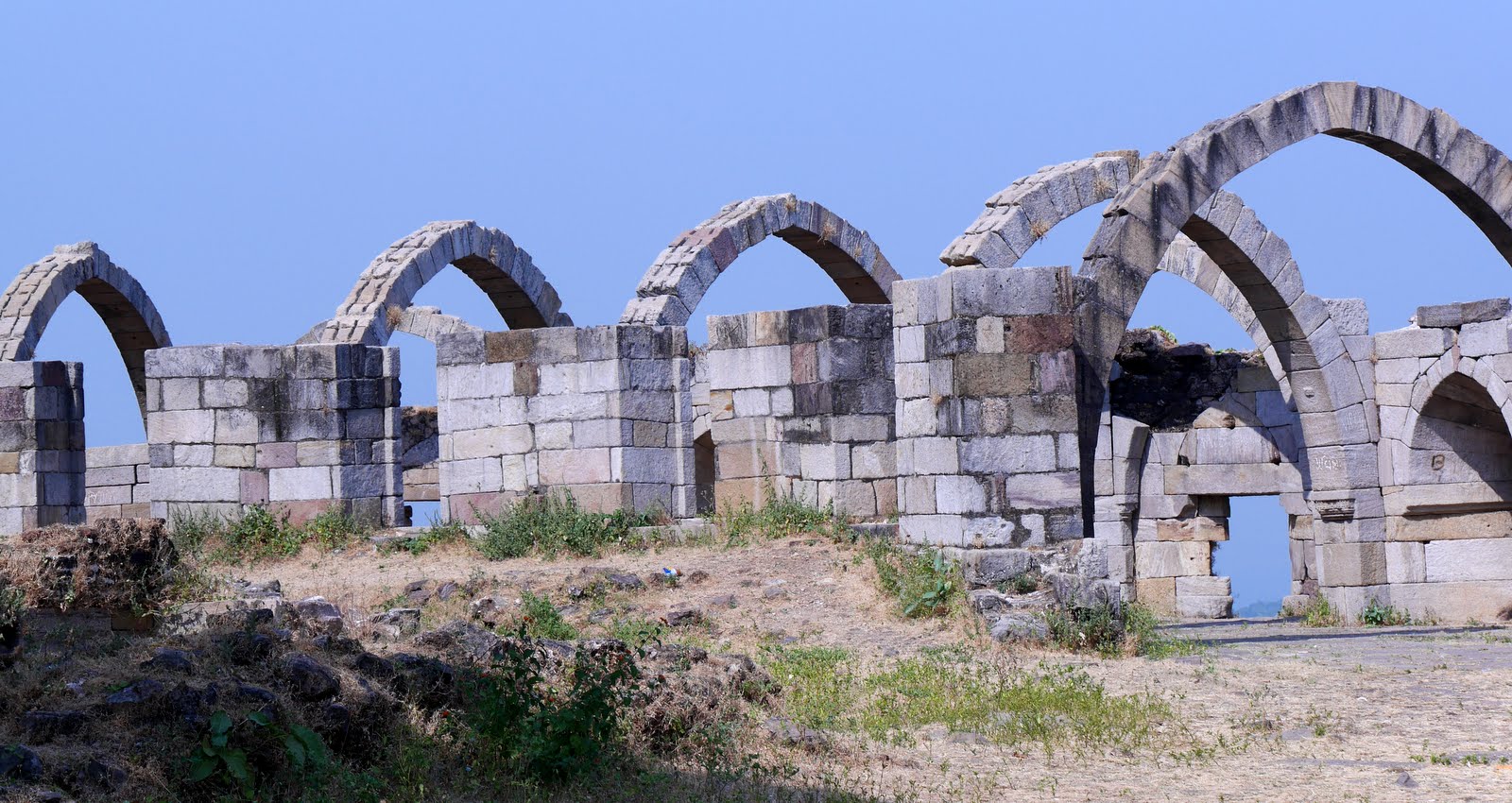 This became the theme for the rest of the monuments in Champaner. Nothing at all to indicate they exist and absolutely no people. I have never ever been to any place of tourist interest in India that is not filled with people. Look at all my pictures. Not a single person anywhere. At some point I felt like an explorer blazing new trails.

With a renewed sense of enthusiasm I peeled my eyes for the Bawaman Mosque which is close to the base of Pavagadh Hill. This was the only place I visited that had an actual caretaker. He was happy to show me around and kindly gave me directions to all the other places I wanted to see. A word of caution, do not believe anyone who says all the monuments are close by and a short walk from one another. It’s almost impossible to get around without your own transport. The next was the absolutely gorgeous Jami Masjid. This mosque dates back to 1513 and is a place of pilgrimage for those who seek blessings from the pir who is buried in one corner of the mosque gardens.

This mosque along with all the other monuments in Champaner is a brilliant example of the coming together of Hindu and Islamic architecture. While the actual worship hall is typically Arabic in style with its 176 columns, the pavilions, jalis and chatris show the strong presence of Hindu masons and architects are typical of the Gujarat style of architecture. The mosque even has an ablution tank which is in the octagonal kund shape found in Hindu places of worship. 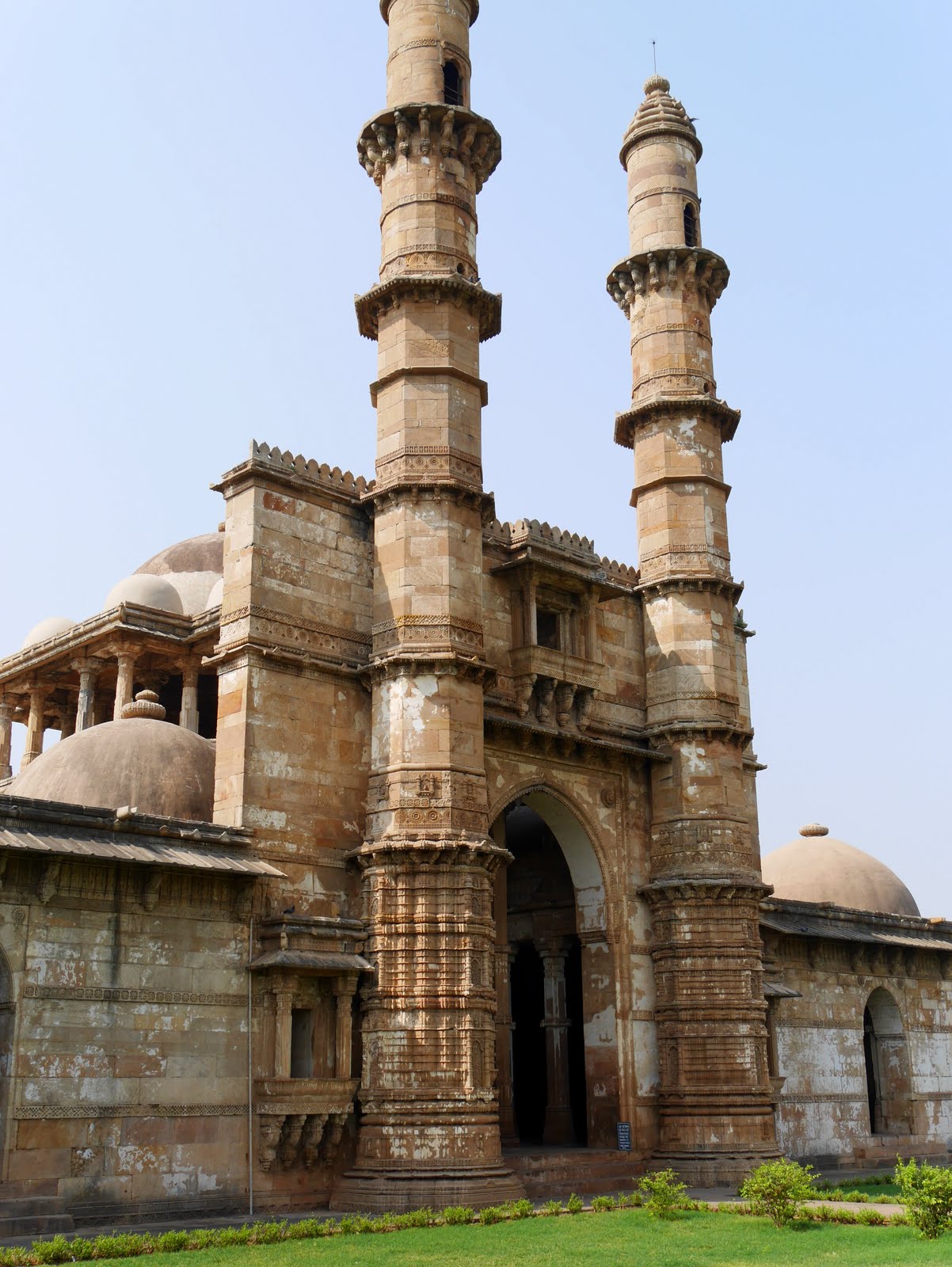 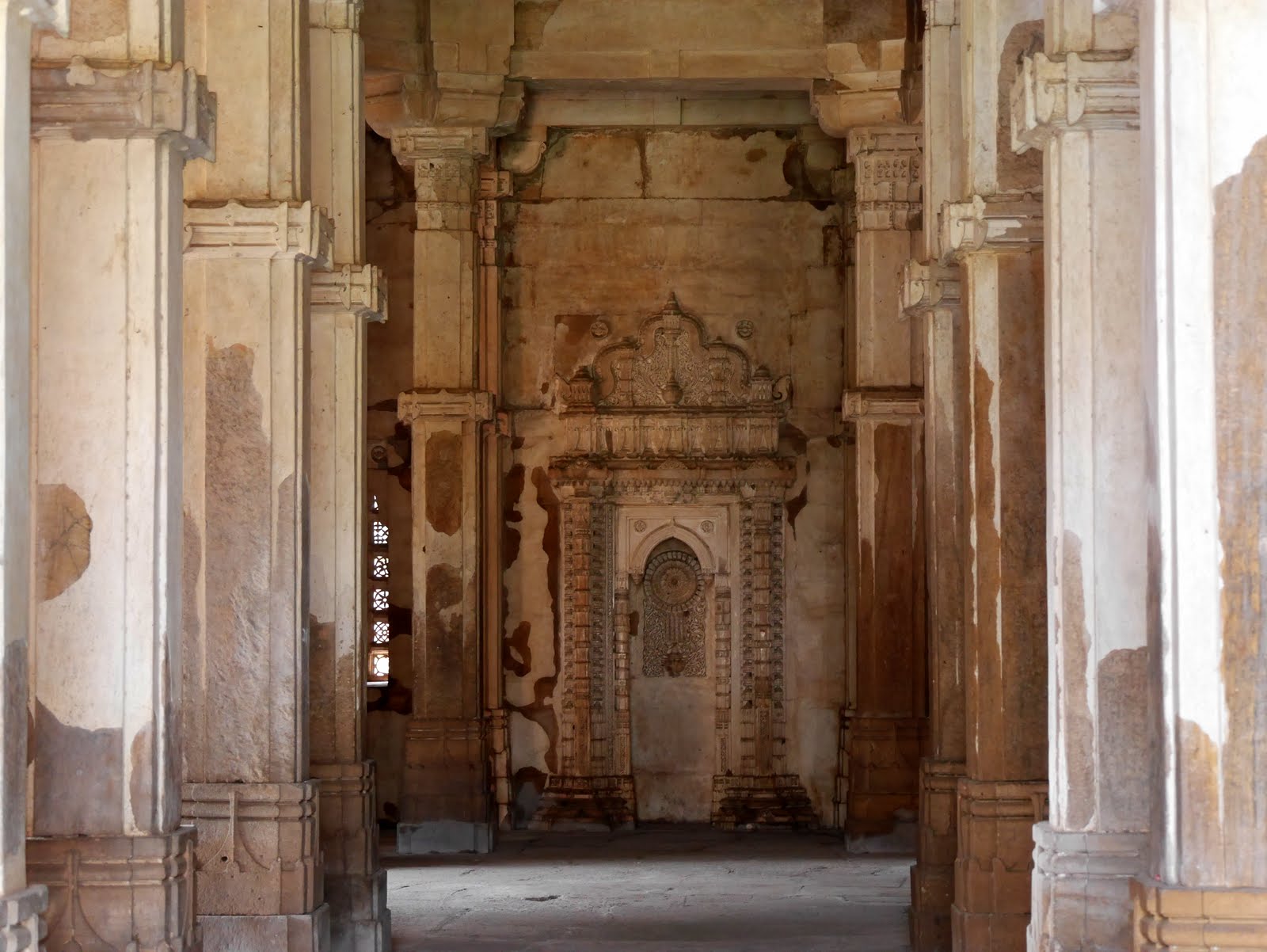 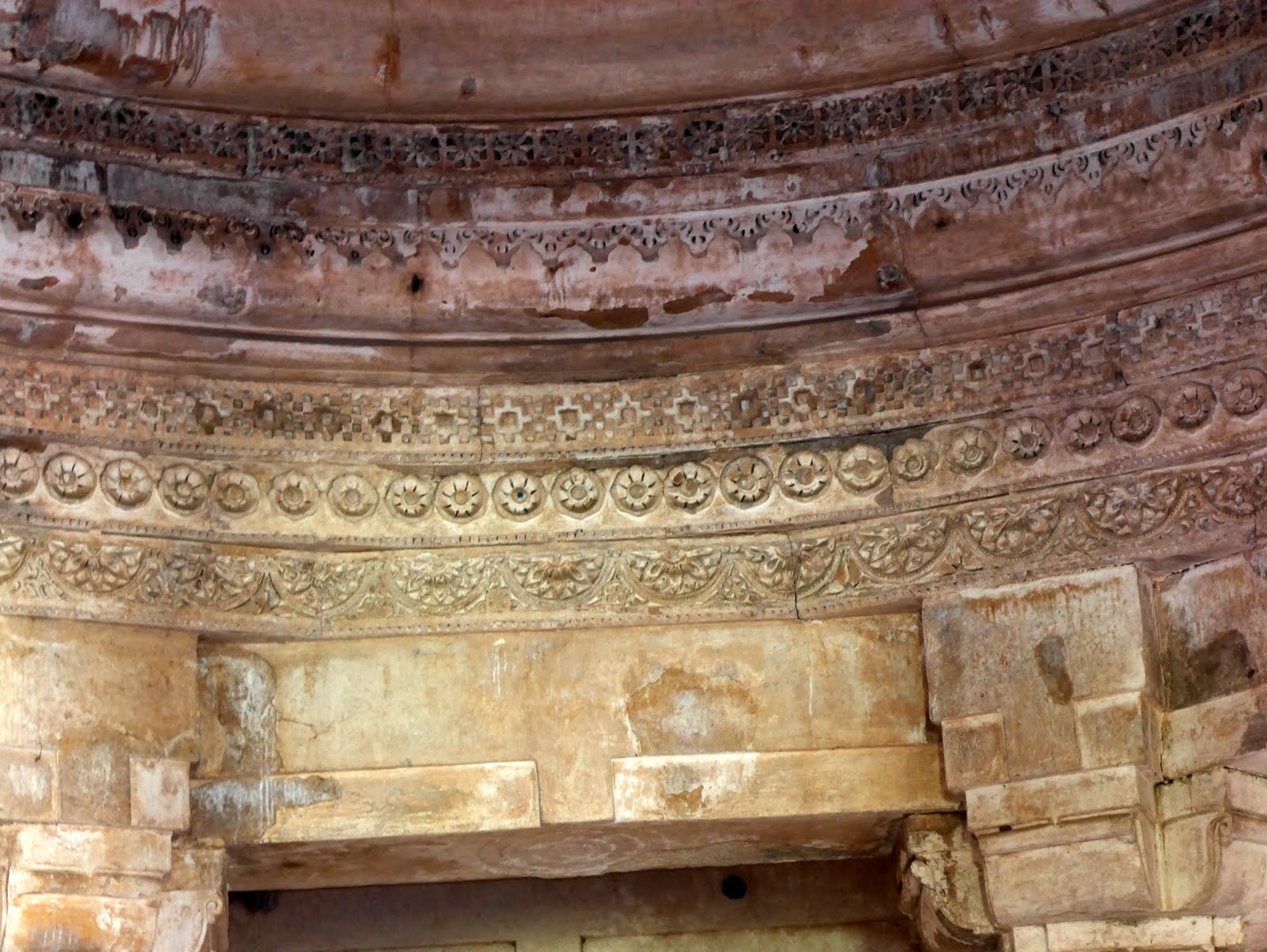 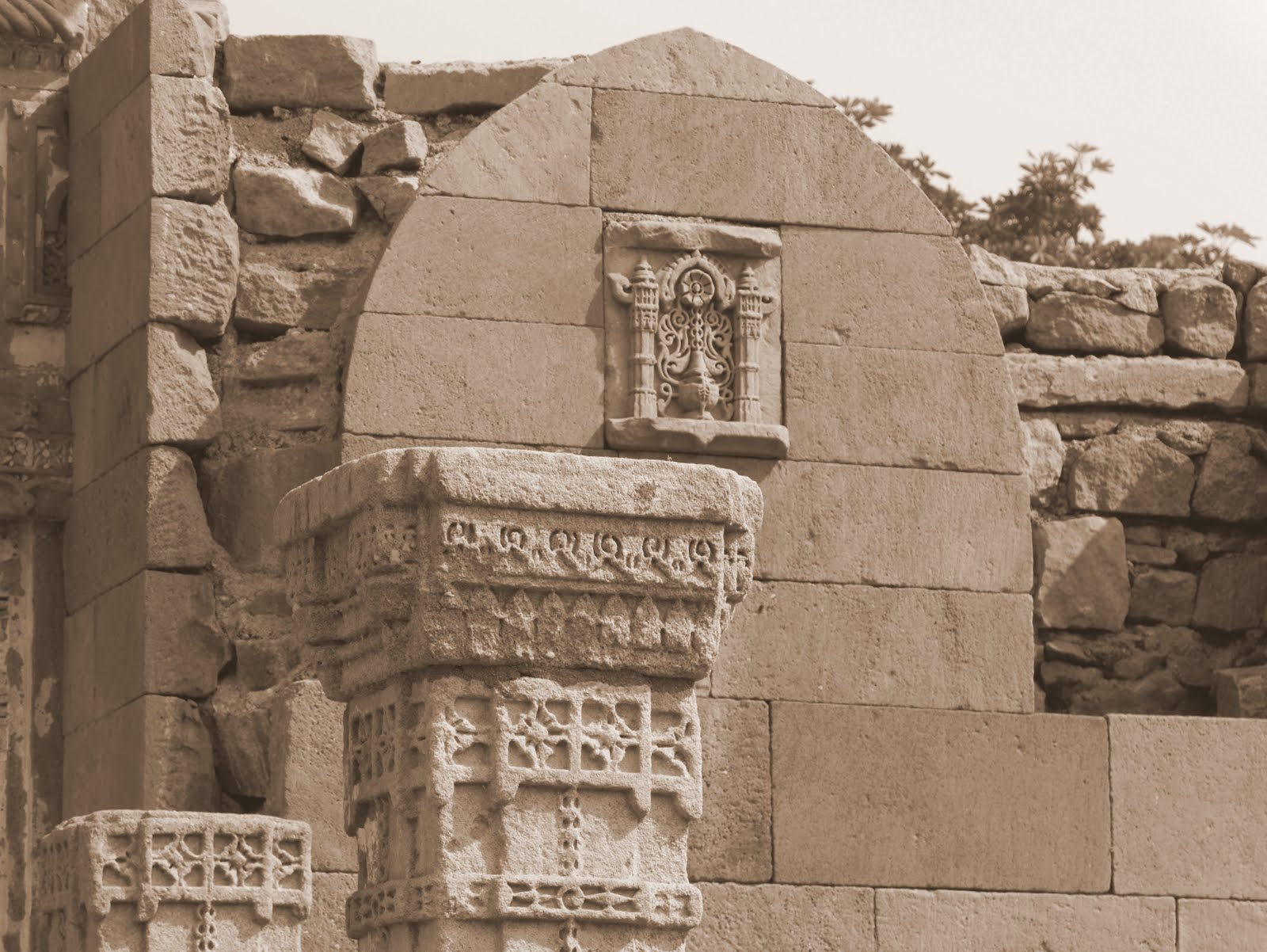 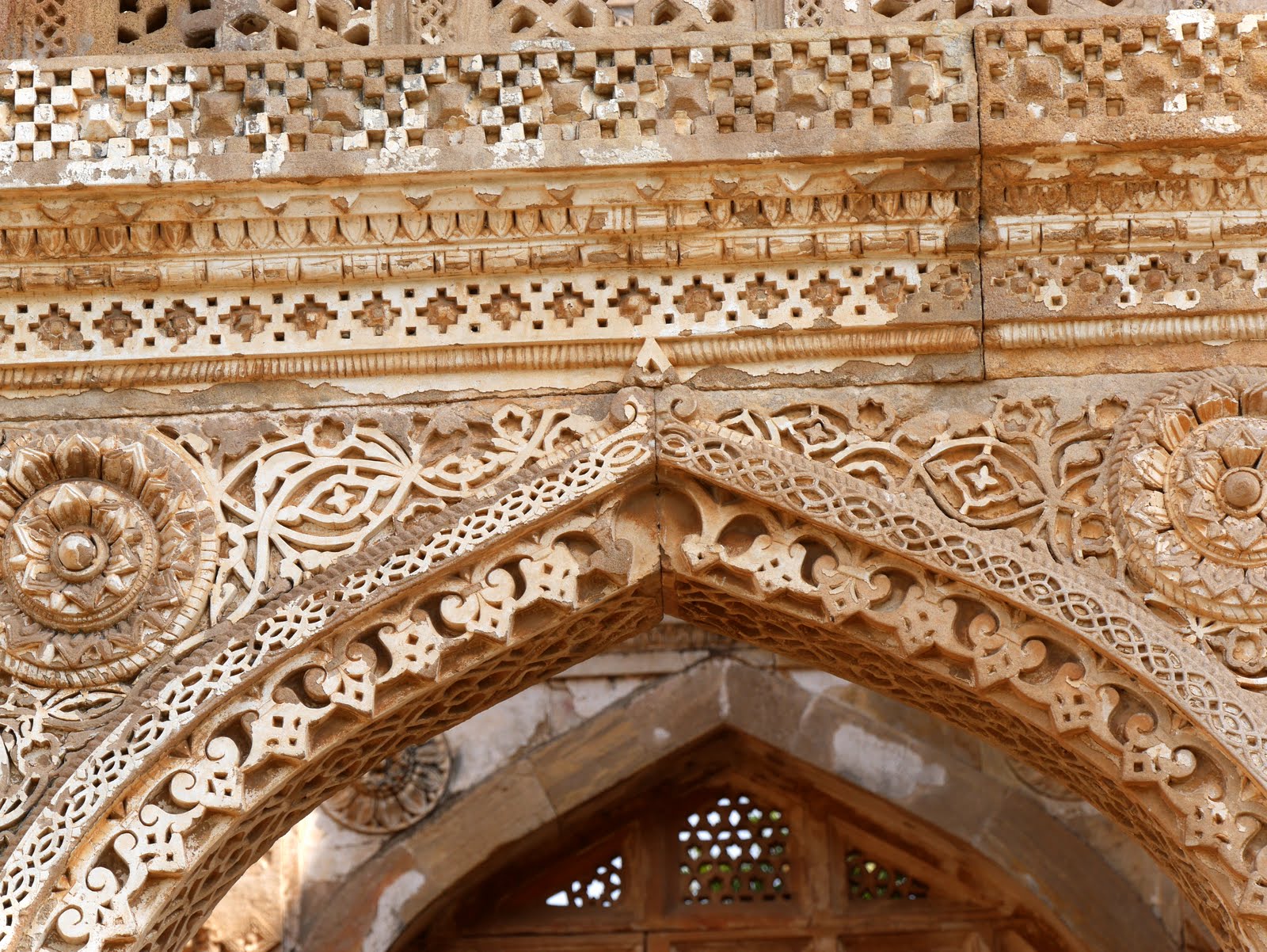 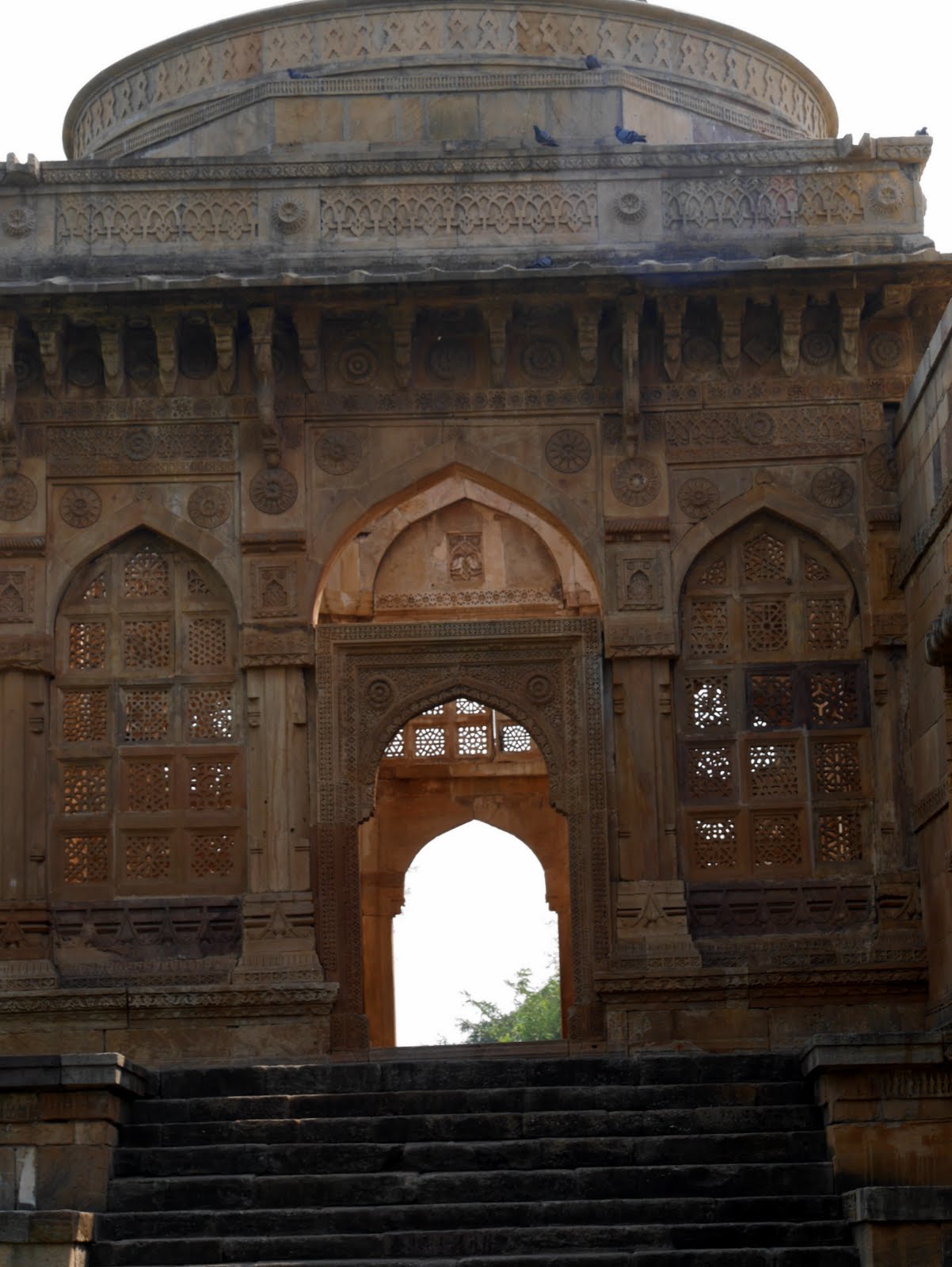 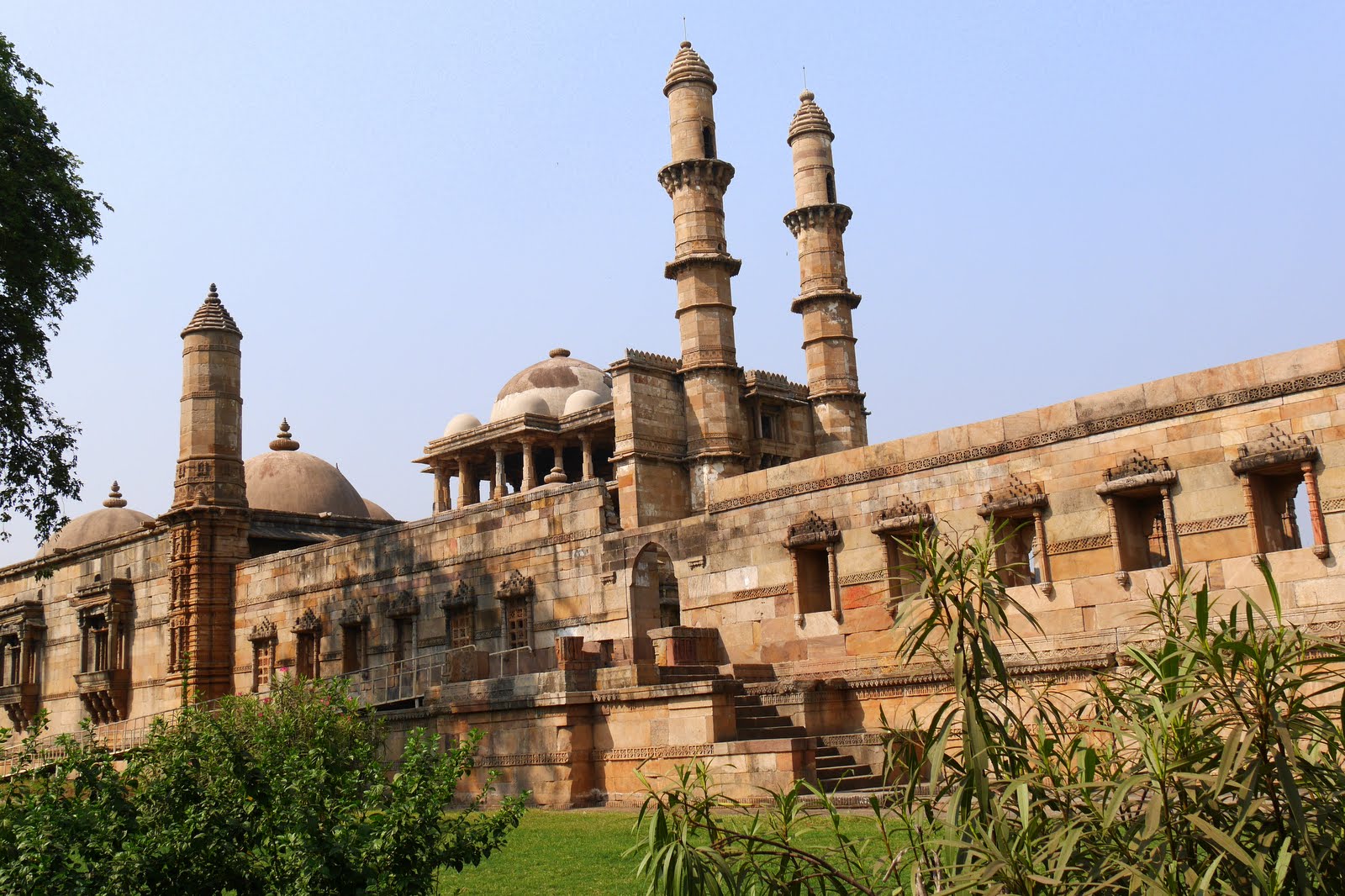 From there, I went along a dirt road barely wide enough for a car to Kevda Masjid. According to one historian, 'nature was integrated into the Kevda mosque's architecture in a way that was unusual for the Islamic world'. 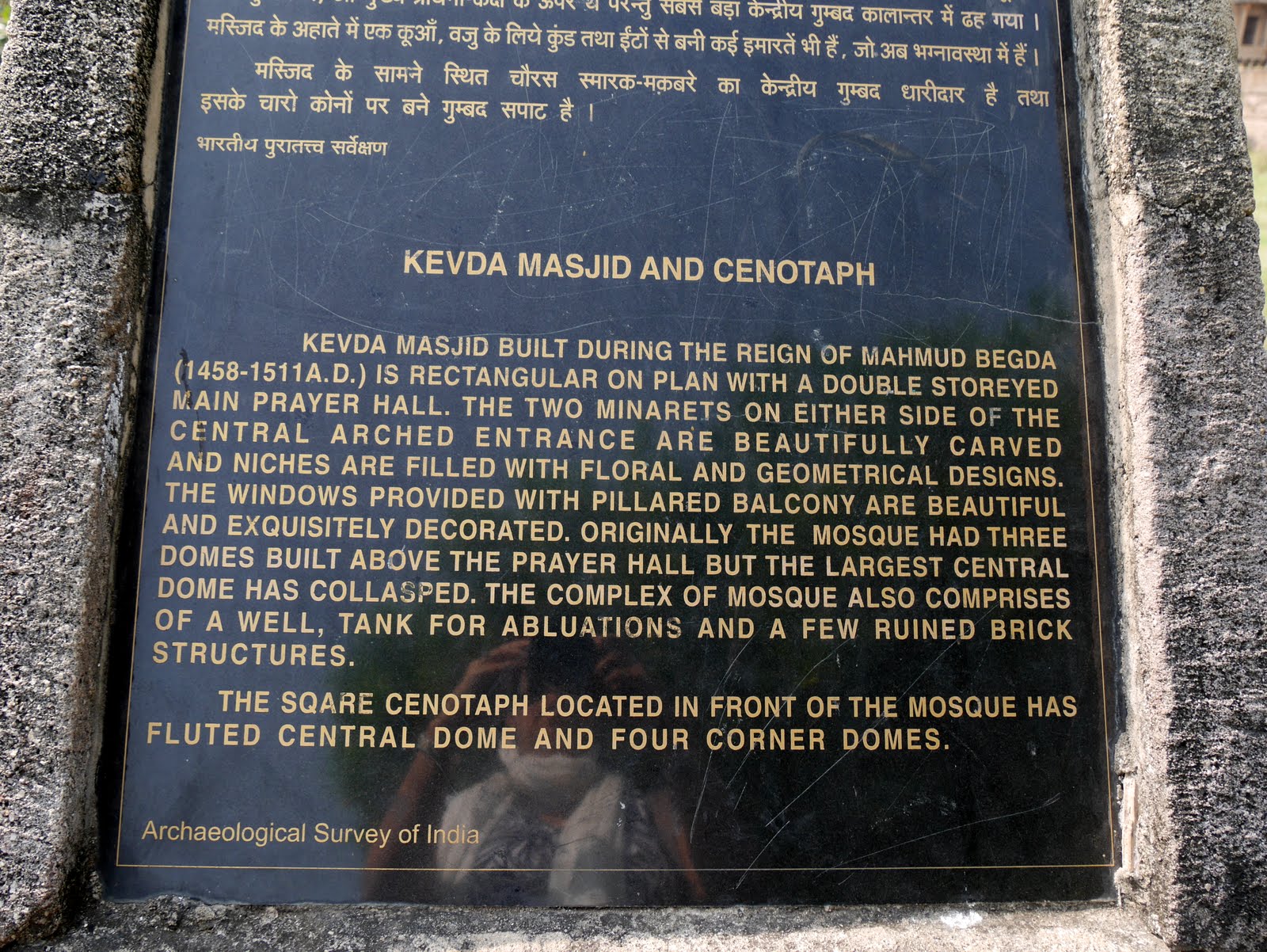 Nature was indeed attempting to reclaim the path to Nagina Masjid and abandoning the car at Kevda Masjid, I walked along a narrow dirt path to the absolutely awe inspiring Nagina Masjid. This was my favourite monument of the lot. Built of white stone, Nagina Masjid is a large monument built on a very high plinth with a large open yard in the front. A well preserved Cenotaph lies to one side of the mosque. 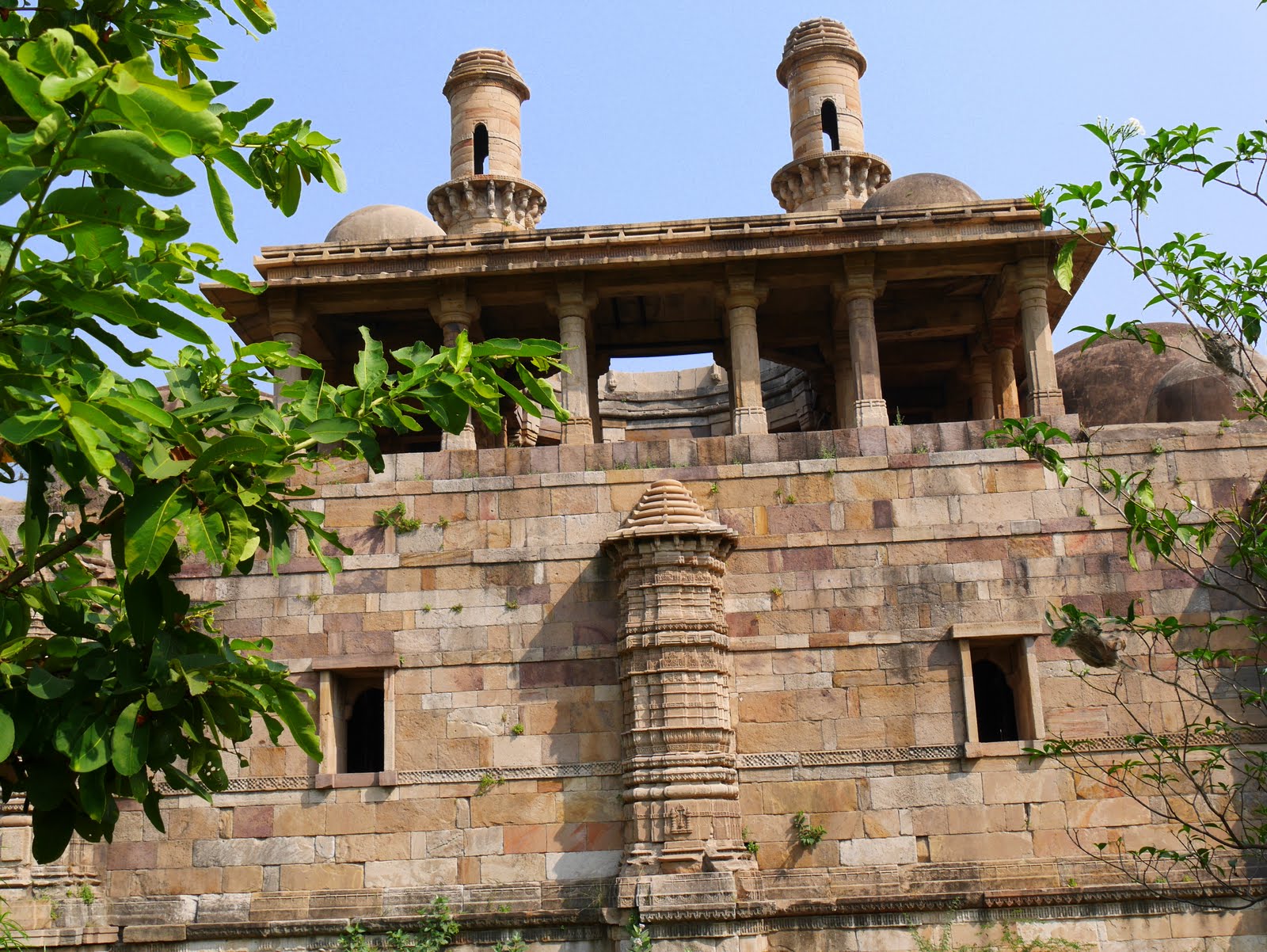 At Lila Gumbaj ki Masjid, I was able to climb up a dark circular stairwell all the way up to the terrace of the higher dome. The views from this height were spectacular. 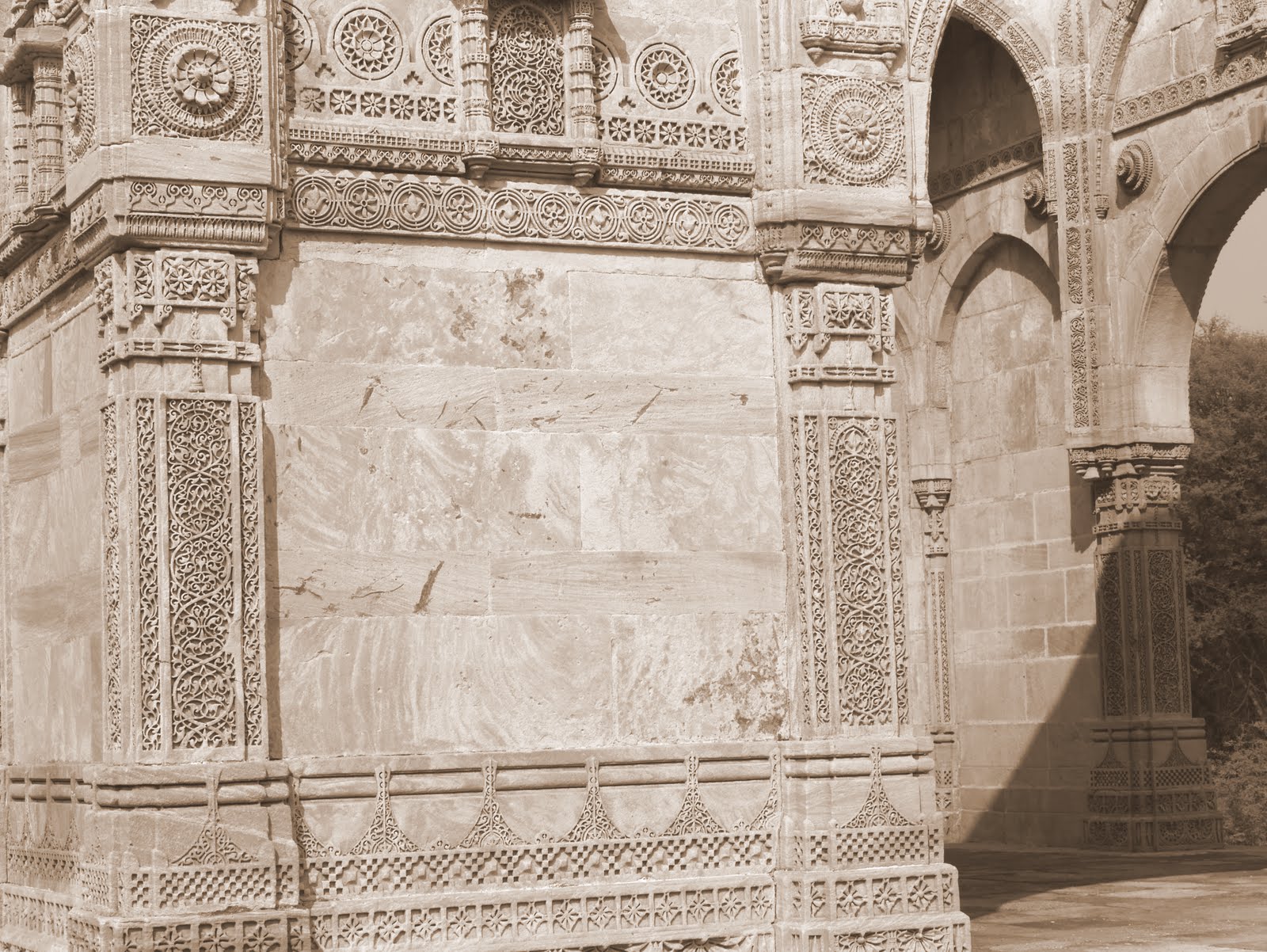 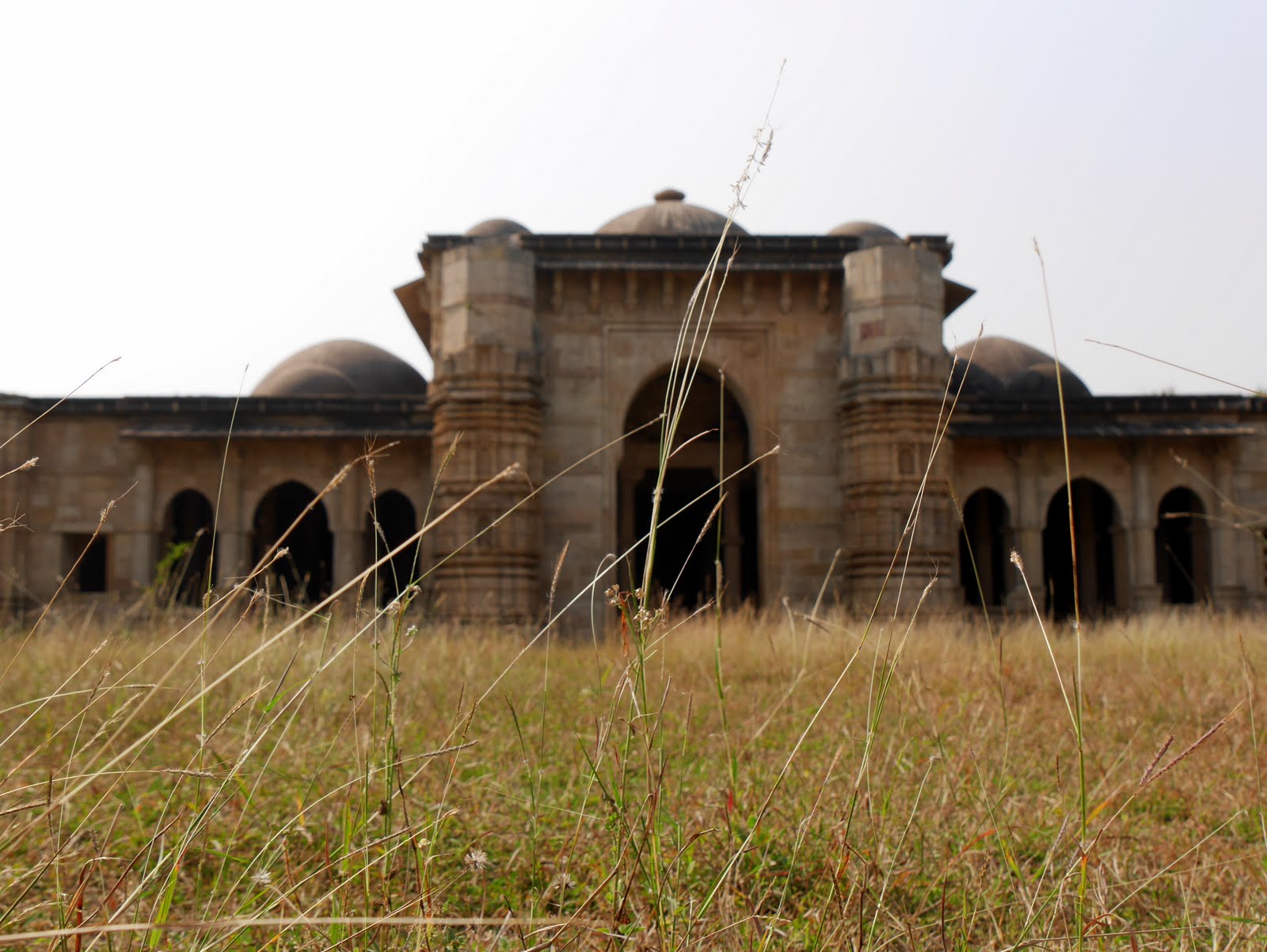 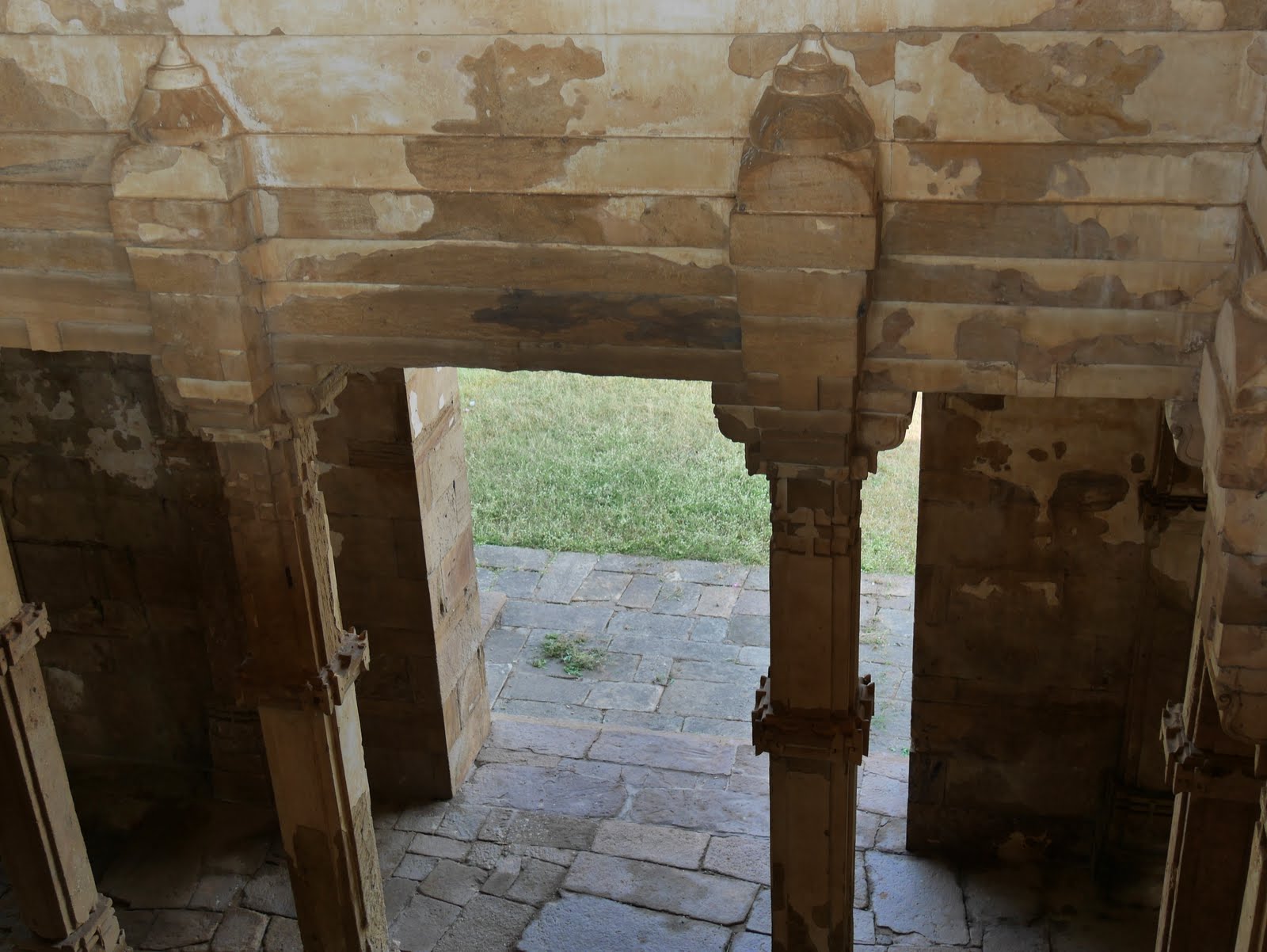 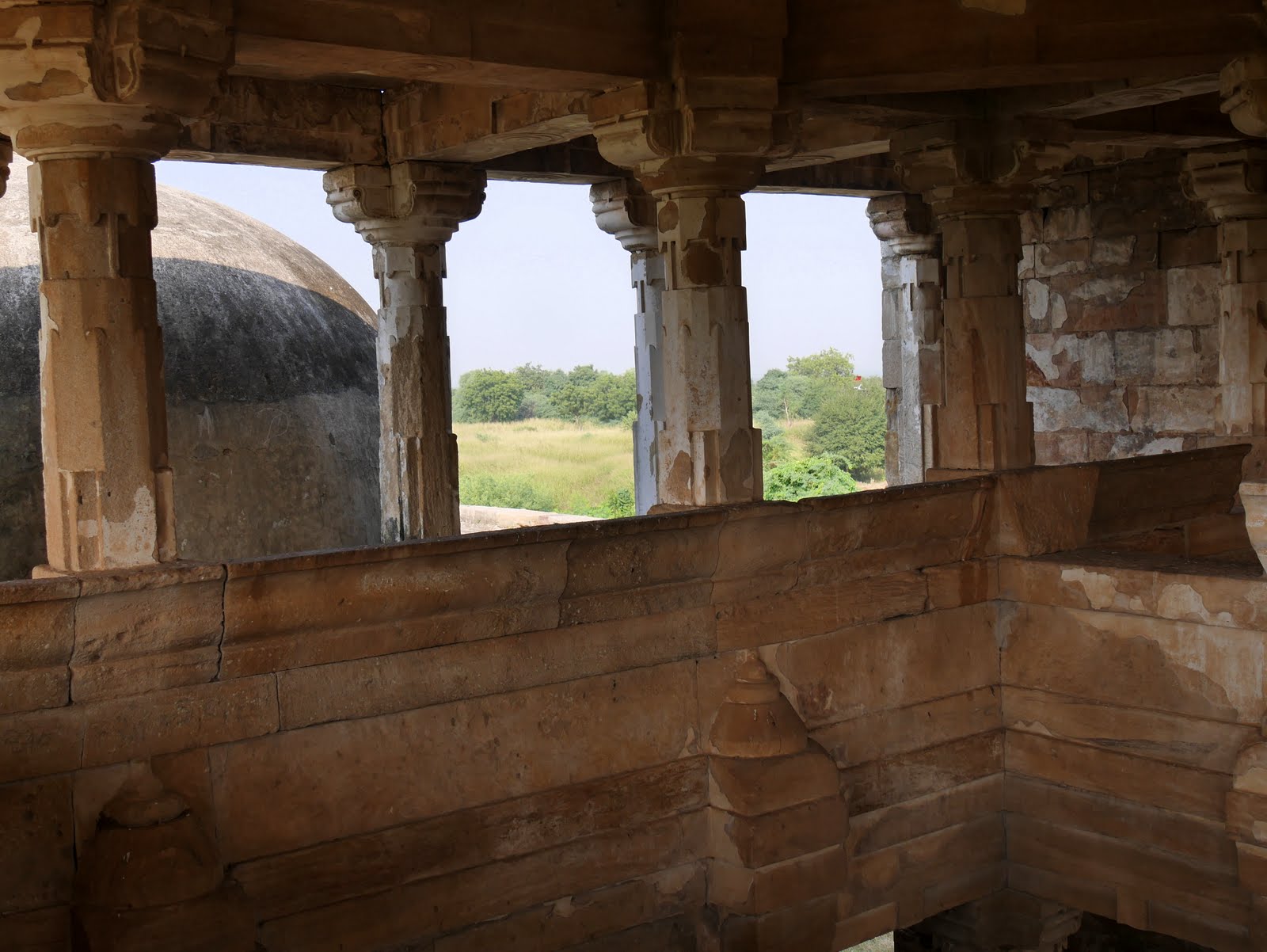 The other monuments I visited were the The Dargah of Sakar Khan, the Helical Step Well, the Kabutarkhana and Ek Minara Masjid.


A day of beauty and discovery. Absolutely worth a visit, especially now, when all the monuments are absolutely deserted.

Do go before the crowds discover the beauty of Champaner. Do take along some water and a packed lunch because there are absolutely no stalls/shops or any form of tourist infrastructure in most of Champaner. There are also no signs or directions, but the local people are very helpful and will happily point you in the right direction.