Thai is one of the world’s more popular cuisines. The food has been influenced by the robust use of spices from India and the Chinese who have made this a formidable cuisine, loved the world over. As with other Asian cuisines, Thai food prides itself on balance, detail and variety, which are of great significance. Thai food is known for its balance of three to four fundamental taste senses in each dish or the overall meal: sour, sweet, salty, and sometimes bitter. Thai food by and large also very scores very high on aesthetics. Many dishes come beautifully plated with delicately carved vegetables on a pretty canvas of vivid colours.

This cuisine uses lots of herbs for flavour, freshness and vibrancy. The dishes are awash with Basil, Mint, Coriander, Kafir Lime leaves as well as Celery leaves. Salads play a large part in the meal. A salad is not just sliced cucumber, tomato and carrot but something that has a reasonable amount of knife skill applied to it. A classic Thai Papaya Salad or one of their minced salads (Larb) are particularly memorable. The dressing, if it could be called that, is a fine balance of sweet from palm sugar, sour from lime and vinegar and lashings of Fish Sauce to bring in the salt and the particular funky smell. Frankly all the salads we ate had the same dressing. Chillies play a large part too and a variety is used differently to influence spicing. The small, thin skinned red chilli is particularly spicy and getting it in your breakfast is not a particularly pleasant experience. The larger thick skinned red chillies are milder and impart a nice, warm chilly flavour without the vicious bite.

The stir fries are almost Chinese. Morning Glory which is loved in Thailand is stir fried with a dash of Soya Sauce, Garlic and Chilli. This is a dish that is almost entirely Chinese in its cooking technique. The Beef with Green Peppercorns is also entirely Chinese in its cooking technique. Both these dishes have the distinctive “Wok Hei” so typical of Chinese food. “Wok Hei” is the unique flavour imparted to food when it’s cooked in a wok on very high heat which causes partial combustion of the oil and the searing and caramelisation of the food in the wok. A good Chinese restaurant - at the risk of being condescending - even in India often gives you “Wok Hei” when you order a stir fried noodle.

The famous Yellow, Green and Red Curries owe their roots to India. A departure is the use of the aromatic leaves and the fact that unlike (i) the North Indian Curry don’t use a base of browned Onion, ginger garlic and tomato and (ii) the South Indian curry with its use of tempering; these curries are quite Indian in complexity, flavour, heat and richness. The Thai Curries have as long a list of ingredients as their Indian cousins and share several ingredients.

Thai deserts are a waste of time. Don’t bother eating them. They are generally coconut, sugar and fresh fruit based. Rather bland. Indian sweets are a much better option or if you can have an ice cream at one of the several Japanese, American and Swedish ice cream outlets in the malls.

All manner of fish is eaten as well as most meat. Of course there is a large Muslim community who do not eat pork. I have not seen too much of exotic meat or offal. The food is fairly tame in this aspect.

Everything had to be disinfected with copious quantities of beer. The local Singha beer, like its Asian cousins – Tiger, Asahi, Chang, Tsingtao has a sweet undertone which I don’t particularly like, but am willing to drink it under duress. 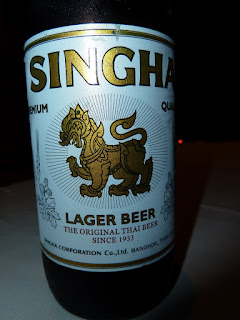 The levels of spicing differ widely. You can say you want spicy food and it would be normal for us Indians. The big problem is that often the food is very sweet. The belief being that sugar counters the spice, however I find this quite unpleasant. Be sure to tell your waiter at the time you order not to make the food sweet, this is far more important than asking for spice.

The photographs are of food that represents a sort of `Best of Thai’ or a selection of the most popular Thai food served in restaurants. It’s obviously not home cooking. I must apologise for the quality of some of the photographs. Some restaurants are so dimly lit that I had to use the flash which completely burns the colour in the food. Sorry about this again.

The Thai restaurants that we went to, which we fully recommend if you go to Phuket or Bangkok are:

Restaurant Thanying and Baan Kanitha are the restaurants most hotel concierges will direct you to. You could add Restaurant Baan Khun Mae, Restaurant Bolan and the Blue Elephant to this list. The Australian chef David Thompson has, in a `coals to Newcastle’ type situation, opened a branch of his Michelin starred Nahm Restaurant from London here in Bangkok. The problem with restaurants like Bolan, Nahm and Blue Elephant is that they are horribly expensive. They also have a more fusion approach to cooking. This type of food is referred to as “Thaifused” by the local press. A delightful word, if you ask me.

Restaurant Somtam is a sort of fast food place. As the name suggests they have Somtam, the famous Thai Raw Papaya Salad as their centre and serve it with a lot of additional accompaniments. It has been voted by the local press as serving Bangkok’s best Som Tam. It was a cheap and cheerful joint close to our hotel and was inhabited by a very young crowd. Good for a quick small salad to take the hunger pangs off.

The Baan Kanitha has a wonderful appetizer that is served complementary. It would gladden every Indian heart. It consists of leaves, much like `Paan’ and bowls containing toasted grated coconut, small lime pieces, dried shrimp, peanuts, ginger, lemon grass, sliced green chilli and a jammy spicy sugary chutney. You make yourself a little packet and pop it into your mouth.

One point to ponder. Thai food is similar to both Indian and Chinese. These are flavours we Indians are familiar with. Mexican food too has many ingredients and flavours that Indians are familiar with. Lots of tomato, lots of chilli, corn, beans, lots of chapatti type breads like Tortillas but despite this both cuisines are very poorly represented in India. I wonder why?

First the Salads and starters:


Now the Stir Fries and odds and ends:

And finally the curries:

And finally some pretty presentation: 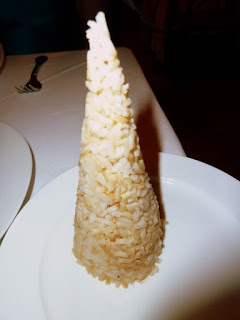 Posted by Stonethrowers Rants at 9:31 AM