Abu Dhabi - The Sheikh Zayed Mosque and the Louvre

We had been to Dubai a few years ago. So, all the tallest building, biggest mall, indoor skiing in the biggest mall, dessert safari kind of tourism was done. Not many new sites had come up in Dubai, except probably, the Frame.

However, Dubai’s bigger [much bigger by land area] sister Abu Dhabi has two attractions. The Louvre which was inaugurated in November 2017 and the Sheikh Zayed Mosque or the Grand Mosque, which we had not seen despite it having been inaugurated in 2006.

We drove from Dubai leaving at 9 am on silky smooth highways. These were probably the best roads we have ever been on. The roads in Croatia were good but these were better. Once you cross the Dubai border or, more correctly, leave the Emirate of Dubai and enter the Emirate of Abu Dhabi, the road changes colour. No, no, it is not miraculous, it is simply a safety measure to warn drivers that they have entered Abu Dhabi, and now the speed limit is lower than that in Dubai. Often not only is the asphalt a different shade, but, the lanes are painted a bright signal red to warn drivers of the changed speed limit. A 75-minute drive brought us to the Grand Mosque.

A few bits of advice when visiting the Grand Mosque:

1.    Arrive in the morning before 10.30. Fewer people around. Less lines, less hold ups at security.
2.    Do not go on Thursday evenings or on Fridays.
3.    For males, dress in long trousers and long sleeve shirts
4.  For females, you will be compelled to wear an Abaya. You can borrow one there. Which will raise issues of hygiene. If possible do carry your own. Alternately you can wear an ankle length skirt with a full sleeved top and a stole to cover your head.

To enter the Grand Mosque, which is free, you need to register either at a window or at one of the several self-help kiosks. You are given a small “ticket” which has a bar code that is scanned at a few points. Be sure to carry this all thru your visit as it will be scanned repeatedly.

The Grand Mosque is huge. Acres and acres of white marble are used. The marble is very white, very clean, very bright and often makes photography difficult. The cleanliness is something that is most striking, it is really really clean. The Grand Mosque also has some biggest, largest things, such as the largest hand knotted carpet and the largest Chandeliers.

The insides of the Grand Mosque are really quite something. The inlay work, intricate and extensive. The Chandeliers very tasteful and the glass windows, I thought, stunning. Do have a look at the photos. I came away very impressed. The Grand Mosque is a must visit. 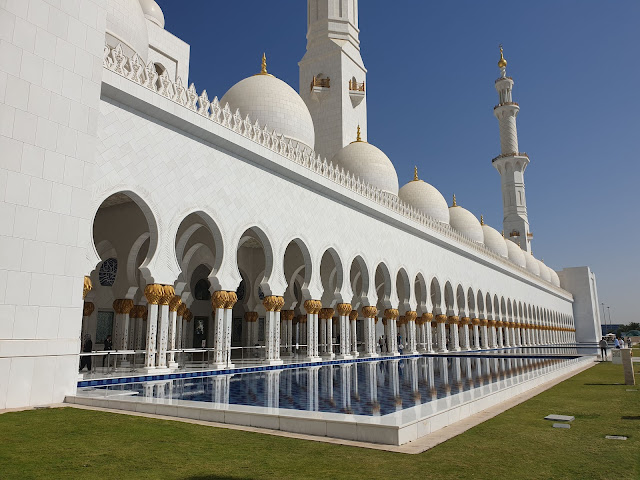 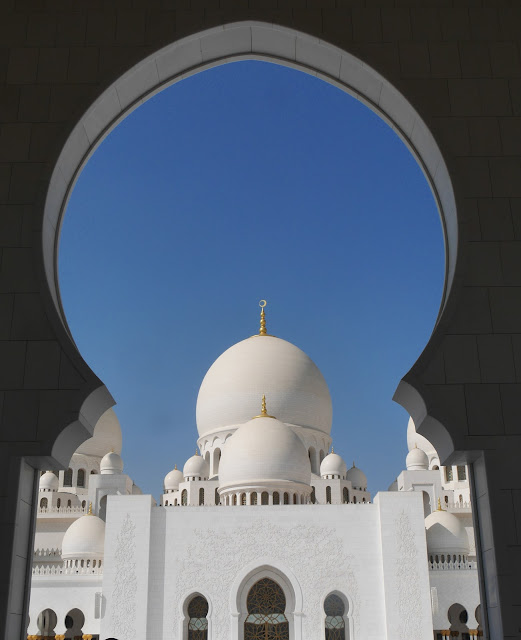 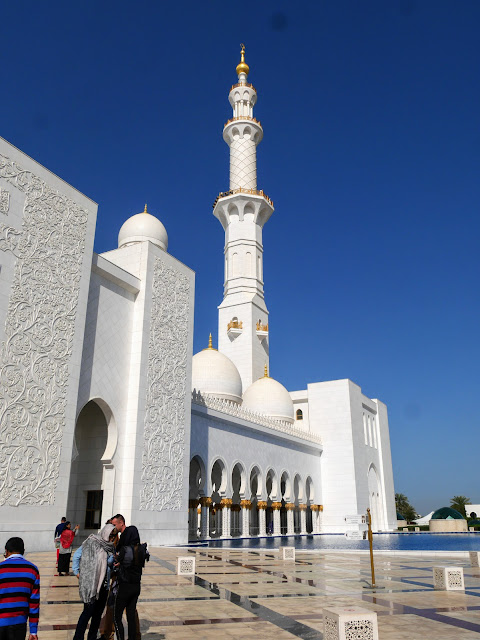 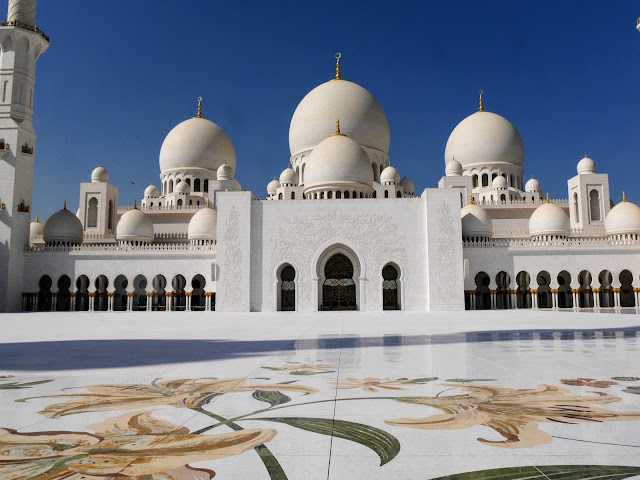 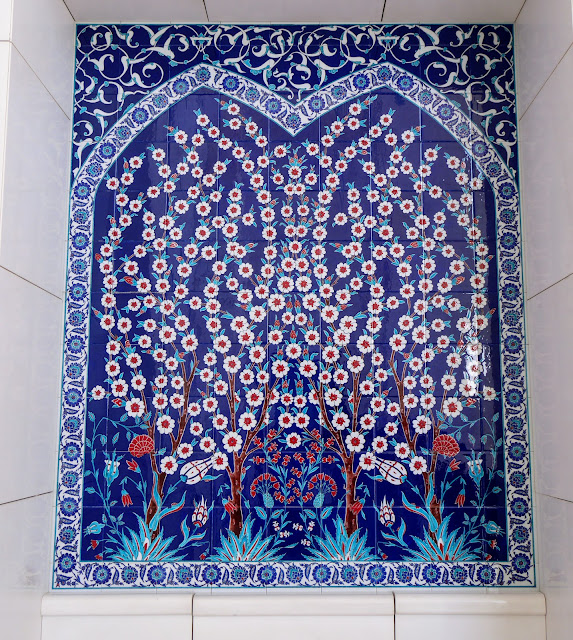 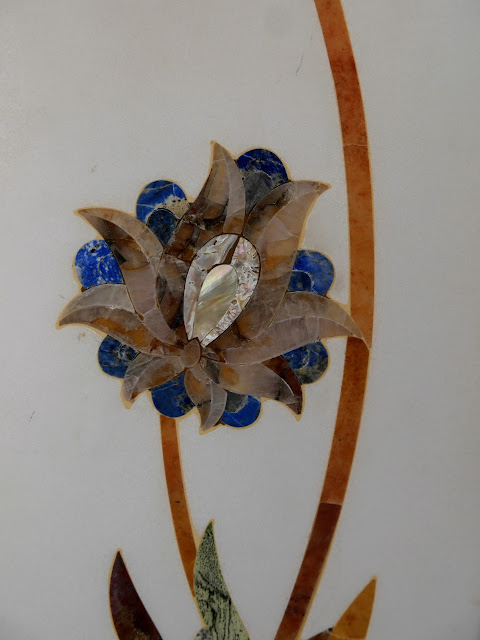 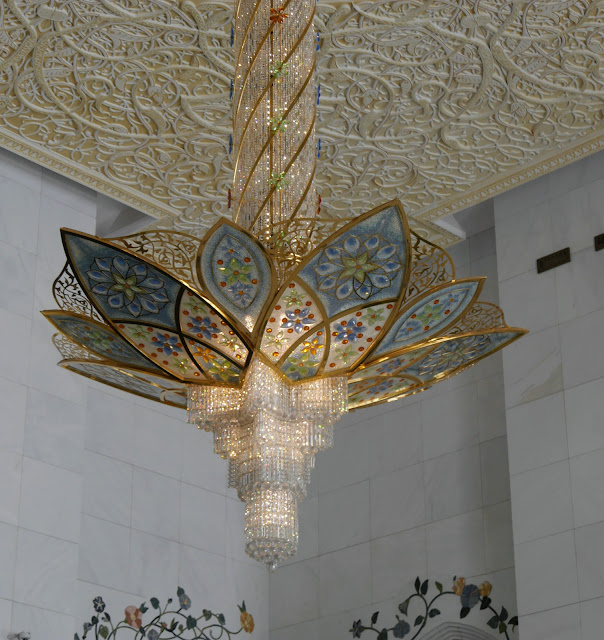 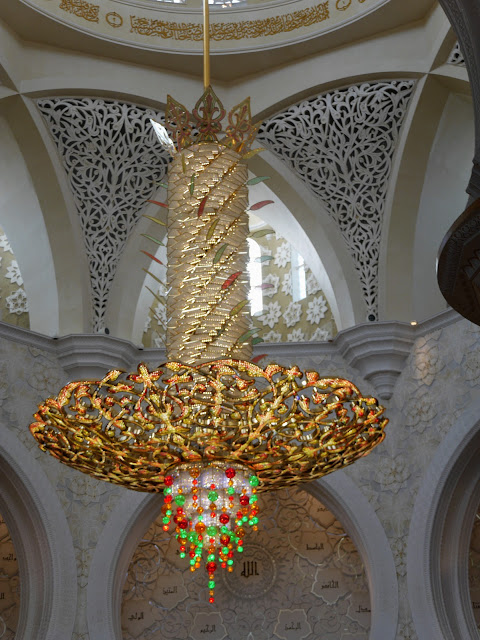 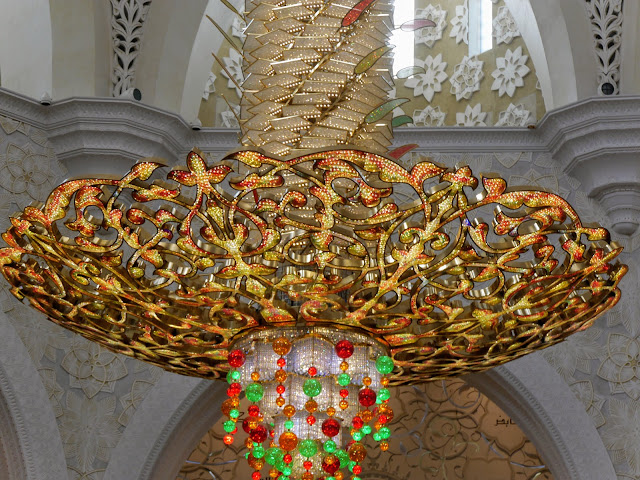 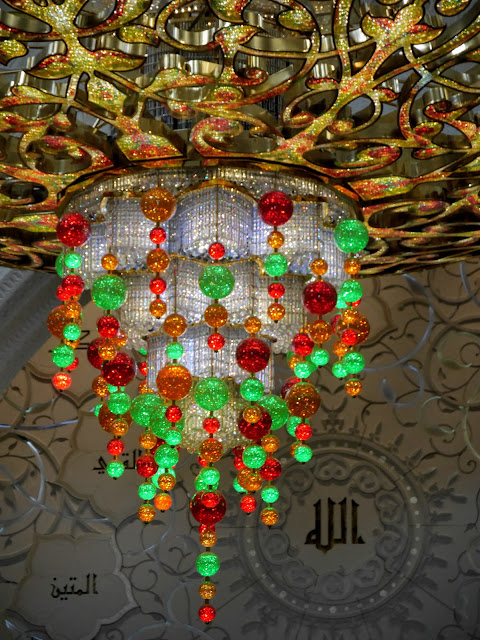 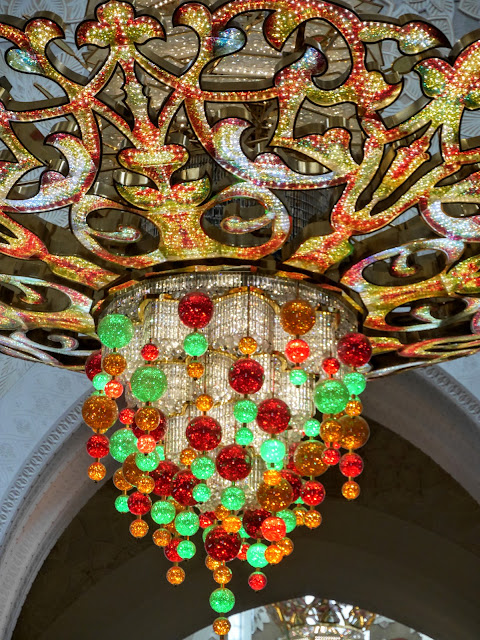 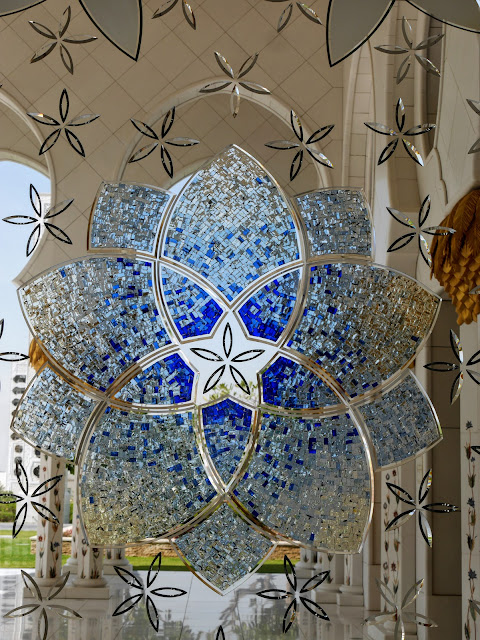 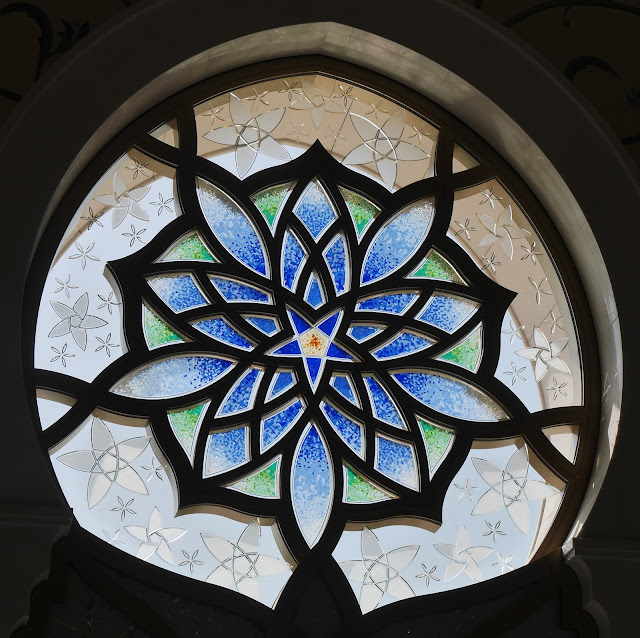 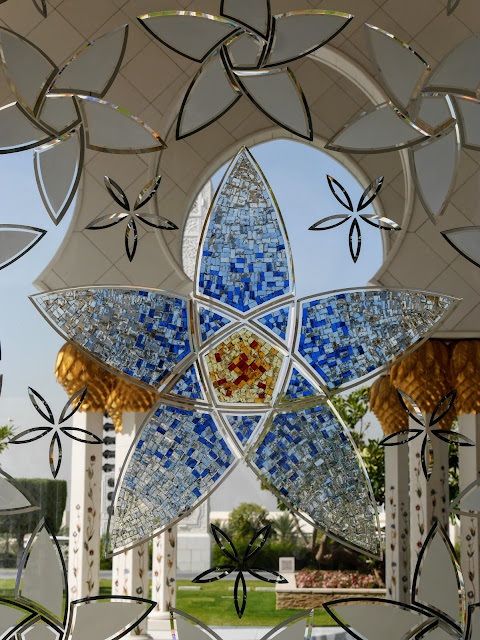 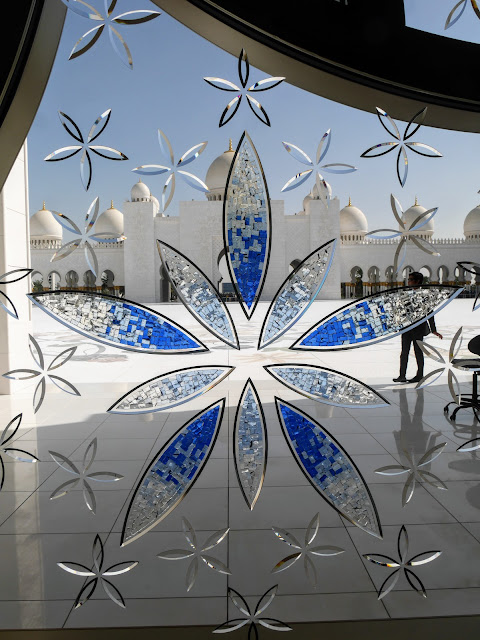 The Louvre, on the other hand poses a bit of a problem. The building is designed by the highly respected Lord Norman Foster of Foster and Partners the UK based Architects. It is supposed to be beautiful, designed as seemingly floating with sunlight appearing to pass thru Date Palm fronds. Like many other structures in the UAE, the fascination or even obsession for including water bodies, is evident here too. Pools of water give the illusion of a floating museum. I used the word “supposed” a couple of sentences ago. My primary reason is that as a visitor, you really have no idea, or chance to see the design of the building. The only way you can really appreciate the building design is from a distance. I found this strange.

As far as the exhibits were concerned, we both found them to be “thin”. No really heavyweight exhibits. There was an exhibition on entitled 1000 years of Luxury.

Decent. But, unfortunately, overall, you could give the Louvre a miss. 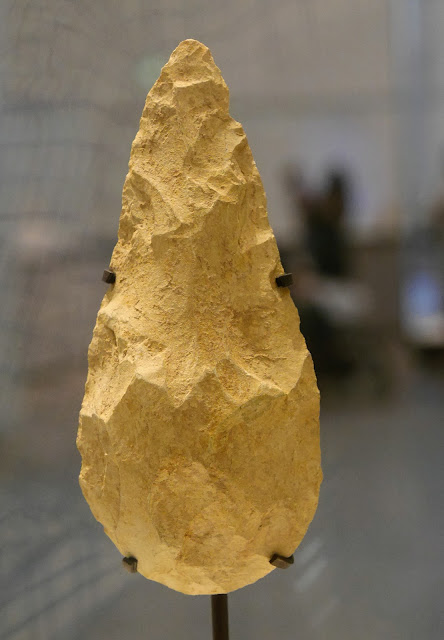 Above: For some reason this exhibit of a primitive tool reminded me of the Asterix & Obelix comic books. To me the tool looked exactly like the "Menhirs" Obelix carried on his back. 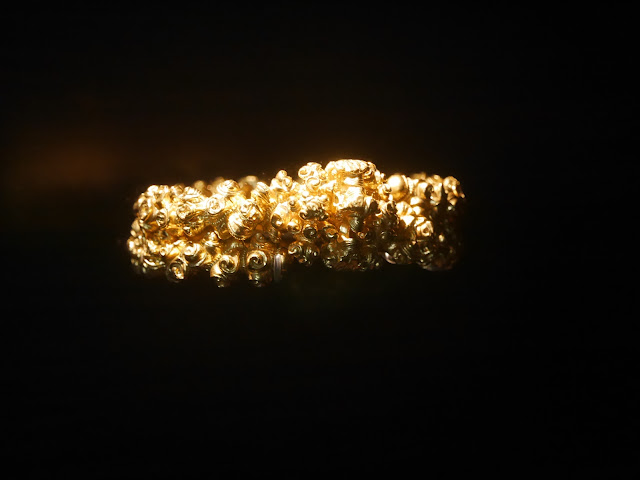 Above: From the exhibition on 1000 years of luxury. A rather modern looking Gold Bracelet with plant motifs. This is from circa 200 to 100 BCE or nearly 2200 years ago. 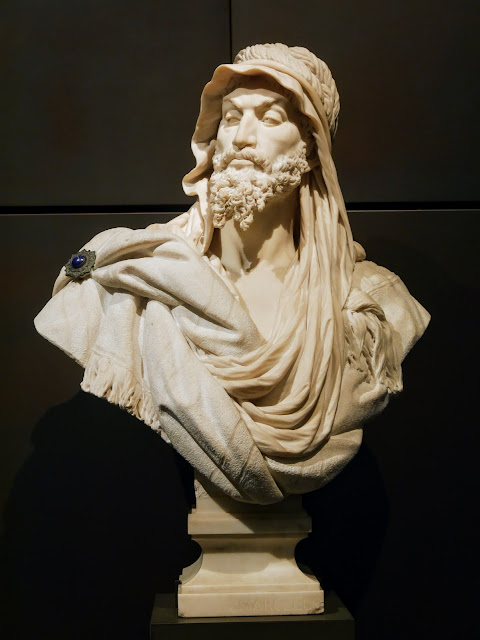 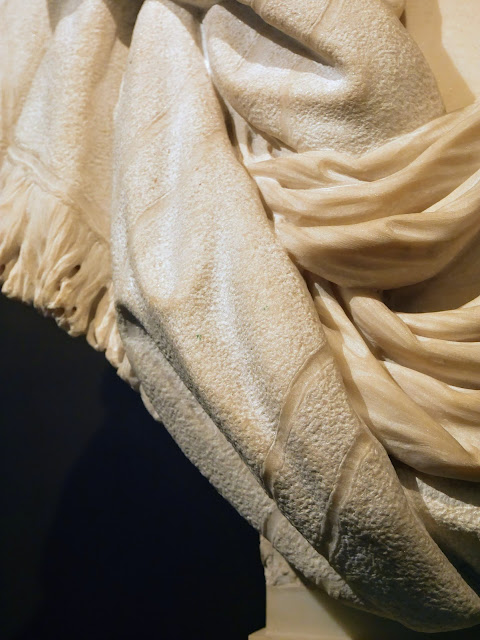 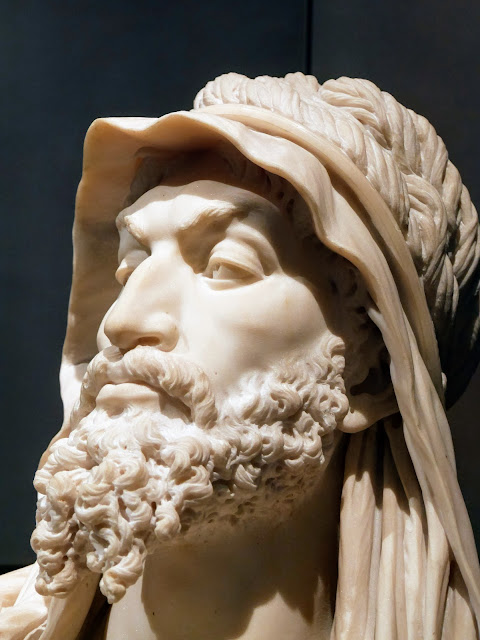 Above: I was fascinated by this Statue carved in Italy in about 1870, not so long ago, just 150 years. The skill with which the exquisite carving on the mans robe is done, showing the Terrycloth or Towelling and the strands. So also the details of the beard. Amazing skills.


Posted by Stonethrowers Rants at 2:27 PM