Bread is one of the oldest cooked foods and evidence suggests that bread was first made some 30,000 years ago. Everyone has bread in their homes and probably eat bread every day. Almost every home makes bread every day.

Europe is a wheat growing region and bread has developed over the 30,000 years into something that is special and local. In Europe alone there are as many varieties of bread, with local variations and characteristics -with `Terroir’ - [a word which Oenophiles love to bandy about] as there are wines. Every country in Continental Europe has its own breads, and I am speaking in huge generalities here. Just by way of a simple example, Italy has a Focaccia, Germany its Pumpernickel, France its Baguette, the Crisp breads of Scandinavia, Soda Bread from Ireland, Broa from Portugal, the Pita, the Bagel, and the names can go on and on. The number of breads available in France and Germany are truly impressive. Each has a different flour, shape, texture and most importantly purpose. To get a proper sandwich you need the right bread.

Making bread is a fascinating experience. Once again the ingredients are not only available everywhere, but, as an added bonus, they are damn cheap. So if you cock up, you lose nothing. If you make decent bread you are a star. What do you need? Water, Maida, Salt and yeast [fresh or dry]. The first three ingredients every house has, even a Jain, Shah and Khandelwal home. Yeast is available in dry form with most baniya shops, fresh yeast may be a bit more challenging but it is very easily available in Bandra. The only tricky thing is an oven. Without that you are stuck with flatbreads.

Our own experiments with making bread started about 13 odd years ago, when we bought our oven. Pinky Auntie, a damn good cook, taught HRH The Queen of Kutch how to make bread. It was hard work kneading the dough. The results were, at best, middling, but, a proverbial spark was lit.

Then circa 2006 HRH The Queen of Kutch enrolled in the Patisserie section of Le Cordon Blue where one segment was bread making. She learnt a lot more. On our return we invested in a really good sturdy US made Viking brand stand mixer which we bought in Mumbai. That machine could knead a large amount of dough very well and consistently. HRH The Queen of Kutch had learnt about the `dough window’ the point to which bread dough should be kneaded. She also learnt that you had to bake the bread at more than 180C to `kill’ the yeast. The bread became better. In fact breads became quite good.

Baking bread became regular. A ham sandwich with fresh bread, lashings of butter and some sharp English Mustard is a most enjoyable lunch. Add a salad or a soup and you have a great dinner. The stale bread can be turned into toasted cheese sandwiches, with a slice of ham, if you are feeling extravagant. Soon HRH The Queen of Kutch started making whole wheat loaves, Caramelised Onion Bread [absolutely delicious] Sun Dried Tomato Bread, Walnut and Raisin Bread which is delicious with some Brie or Camembert. Along with Miss Stonethrower earlier this year we made a squid ink bread and had bacon butties for lunch. Absolutely delicious. Breads were turning out well. 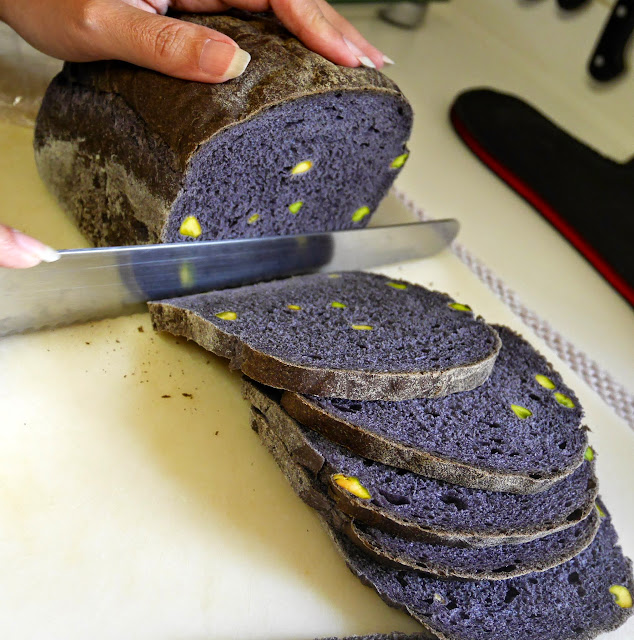 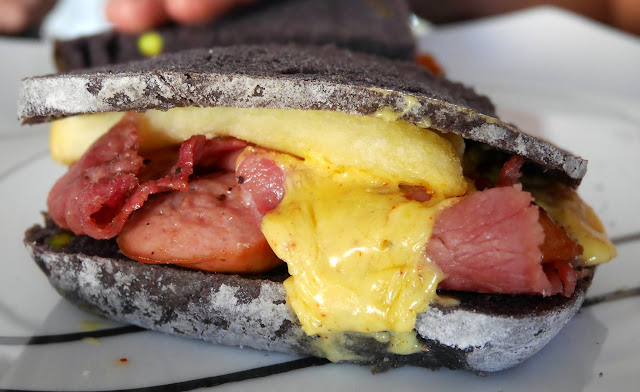 Then, while in England in March, while in the Cooking section of Waterstones [a good bookstore and one of the few that has not yet shut because of the online book sites] I saw a book on bread. I glanced thru it and thought it was fantastic. I called HRH The Queen of Kutch to have a look and she said lets buy it. So, that evening while in London I ordered the book on Flipkart to be delivered at home. The book arrived soon enough and it was truly fantastic. The best book on Bread that I have ever seen. 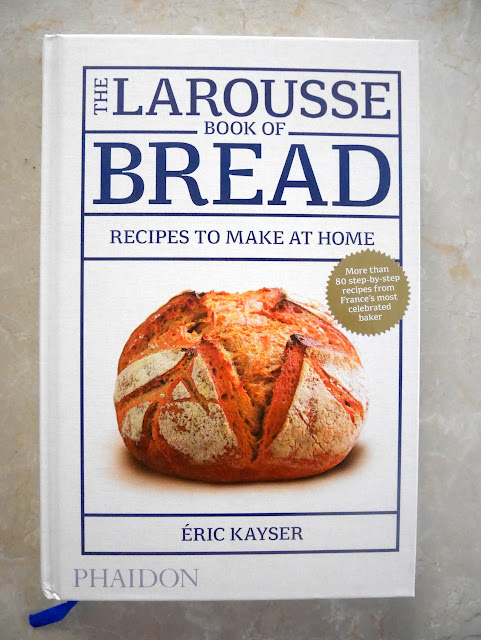 The book gives you a recipe for a Sourdough starter. This is something we had read about but never tried. It takes 4 days for the starter to be ready. We made the starter and as a first HRH The Queen of Kutch decided to make Bagels. It was her very first try at making Bagels. Honestly, with hand on my heart, the Bagels were fabulous. Okay, I admit that the shape is irregular, but this was the first attempt. This was a massive improvement to any bread we had made earlier. We had excellent sandwiches with the Bagels. 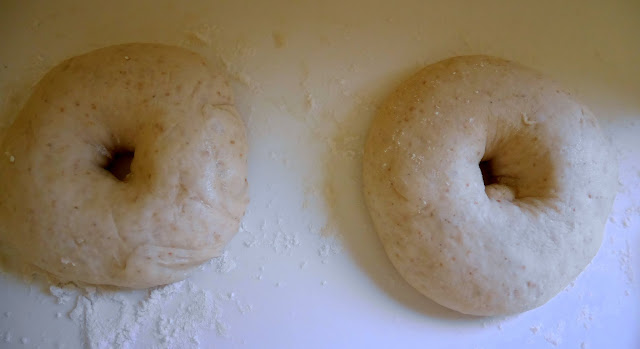 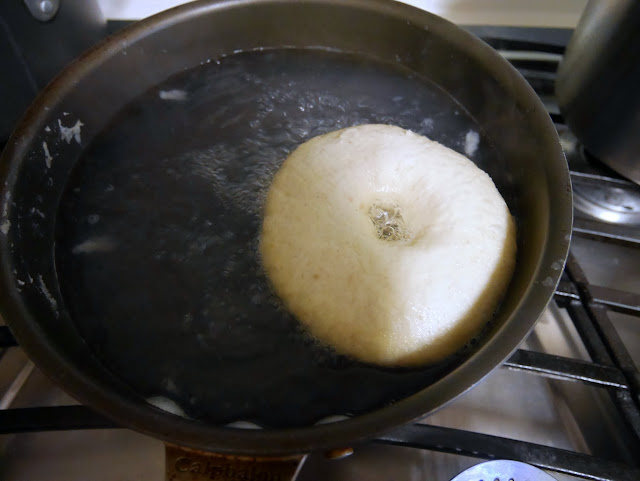 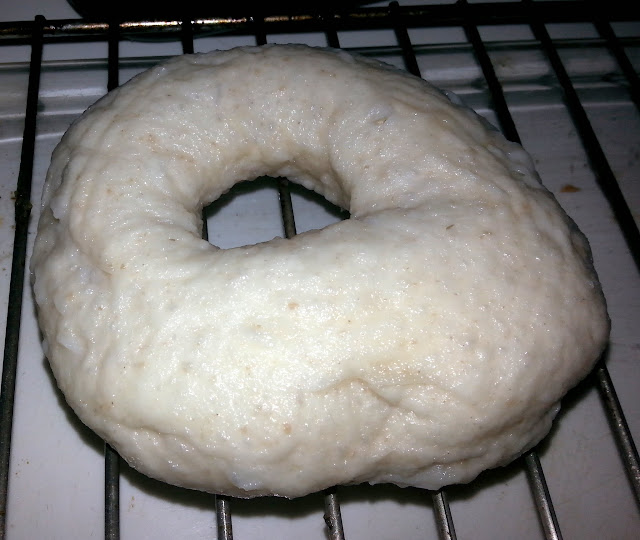 The Bagel after the boil 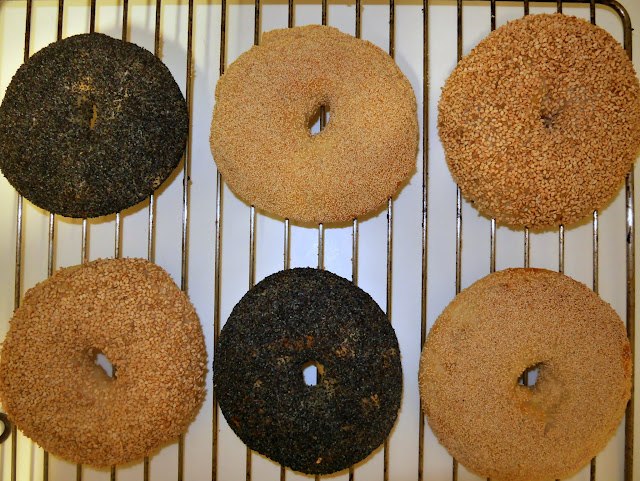 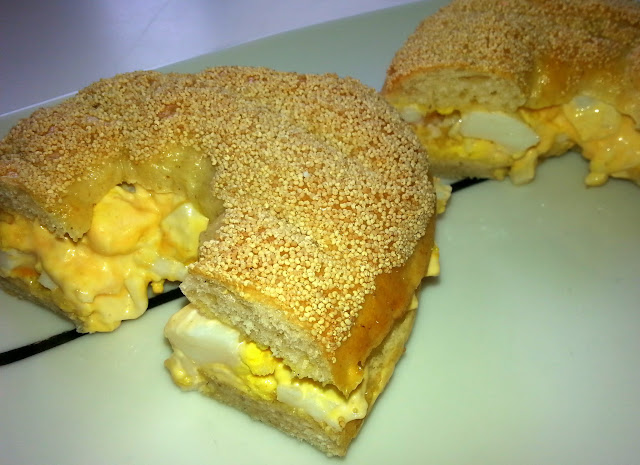 Next up, HRH The Queen of Kutch made the classic French Boule. This is a large free form loaf. The recipe had three major departures from any other bread recipe we had used in the past. First the dough had much more water resulting in softer dough, very little yeast was used as the Starter was mixed into the dough, and, lastly, the bread was baked at a much higher temperature of 230C. HRH The Queen of Kutch was extremely apprehensive of the high temperature as she thought the bread would be burnt. However, she had no reason to fear. The bread turned out absolutely fantastic. HRH The Queen of Kutch had never hitherto achieved this quality of bread. The crust was crunchy, chewy and deep. The crumb was light and airy with large holes. The bread smelt wonderfully toasty. Frankly, I would pay a lot of money for the bread. Have a look at the photographs. 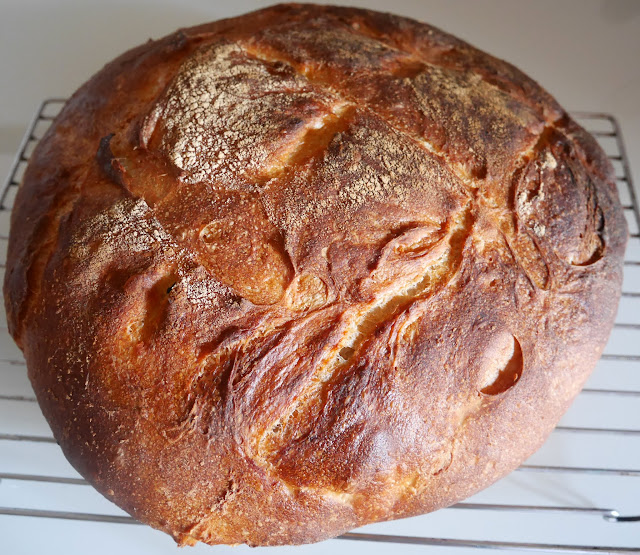 The book was singularly the reason for the dramatically better bread.

We still had some starter left. So over the weekend it was time to make a Cibatta. The ingredients were the same as the Boule, however the proportion of water, the kneading time, proving time, shaping and baking time were different. The Cibatta were baked. They were a knockout. So once again we had sandwiches. Ham, Chorizzo, Tomato, Cheese, Mayonaise and some Lettuce. The Cibatta made a good sandwich. 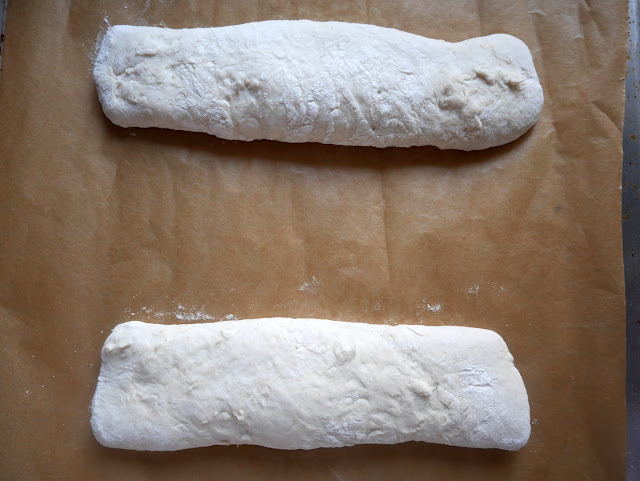 Cibatta - The first rise. Folded side down 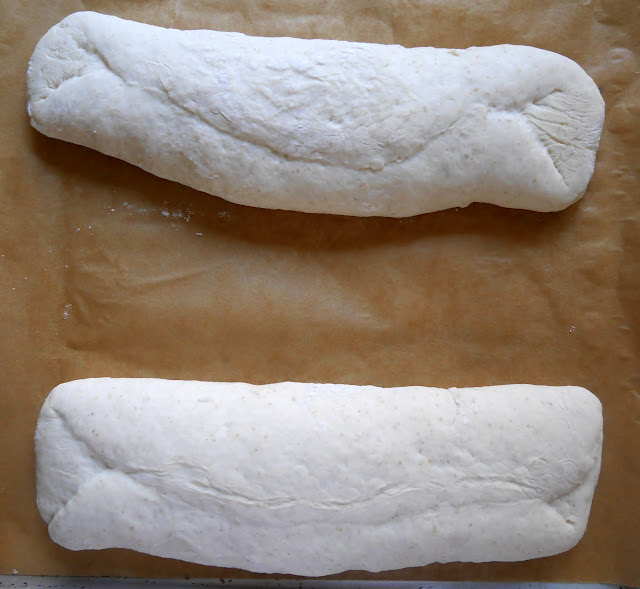 Second rise. Folded side up

Fresh out of the oven 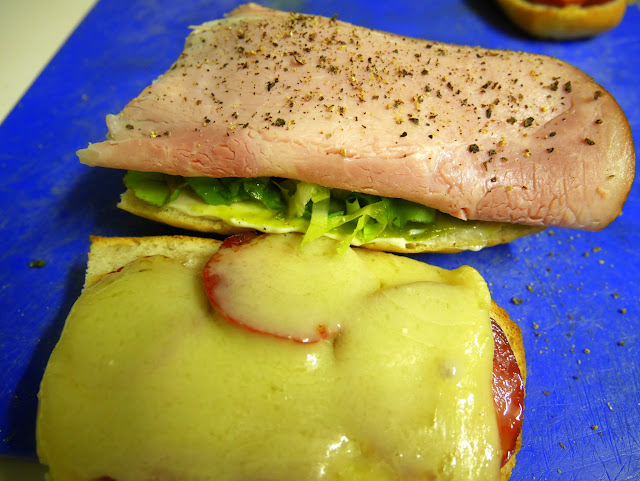 Have a look at the photographs at the difference in the crust [colour and depth] and the crumb [massive holes v/s smaller holes] in the two – Boule and Cibatta. 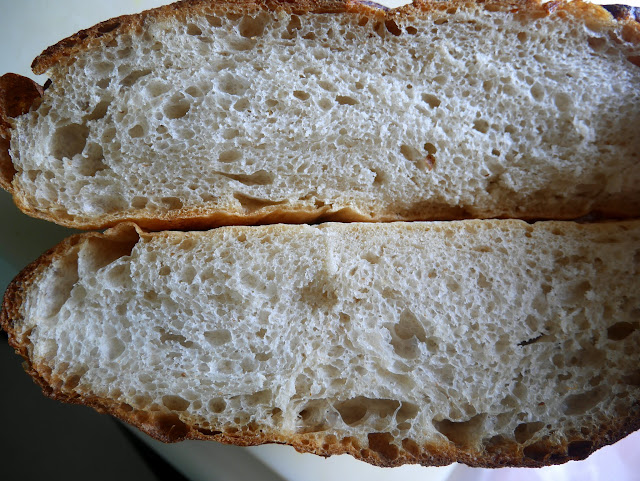 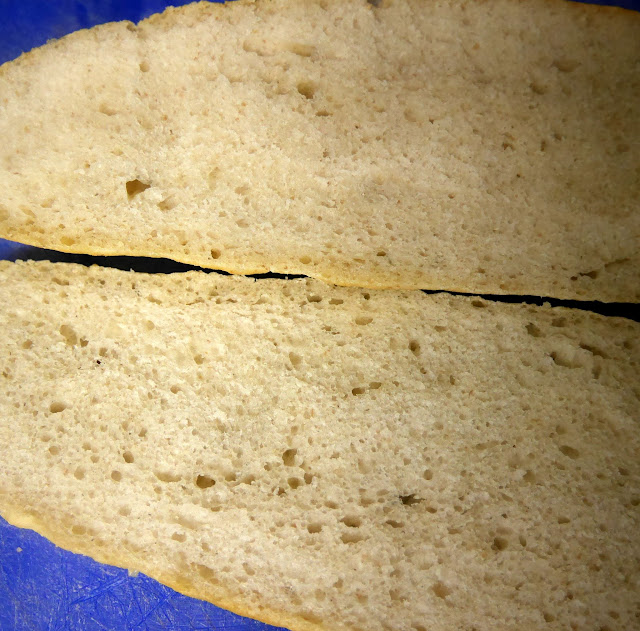 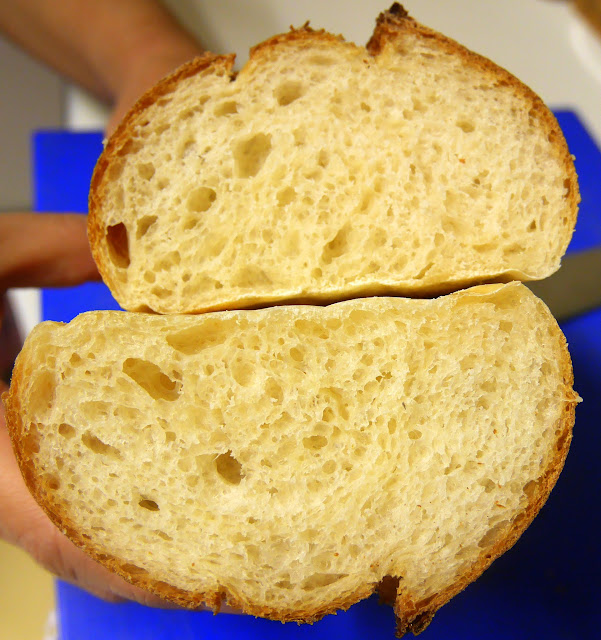 Lighter crust, wonderful light airy crumb. This is the Batard

The experiments continued. Next up was Coriander Bread. This was an adaption of Basil Bread. We thought that Coriander Bread would be great to have with Kheema which we had made for dinner. The Coriander Bread was good bread, however, there was too little Corainder, so the flavour did not shine thru. 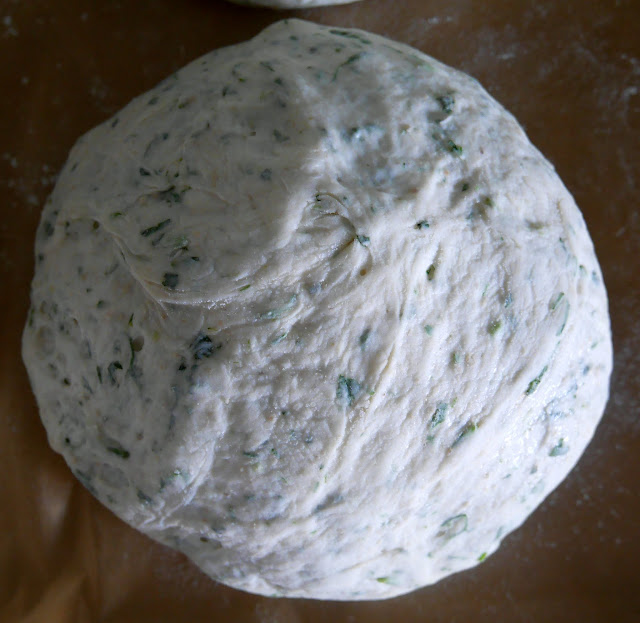 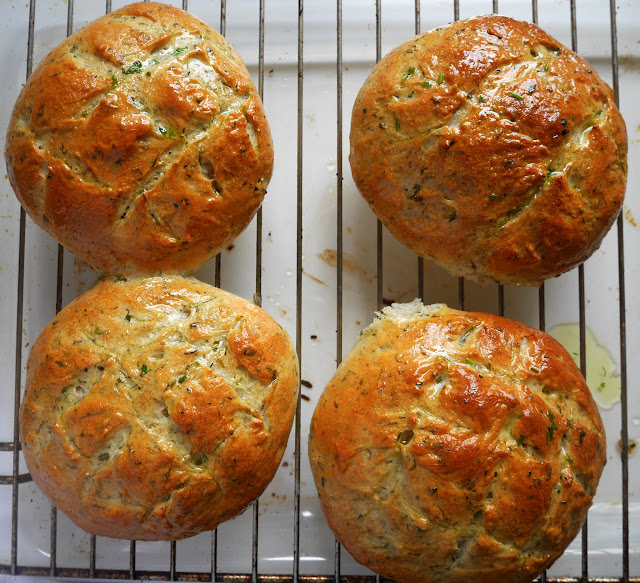 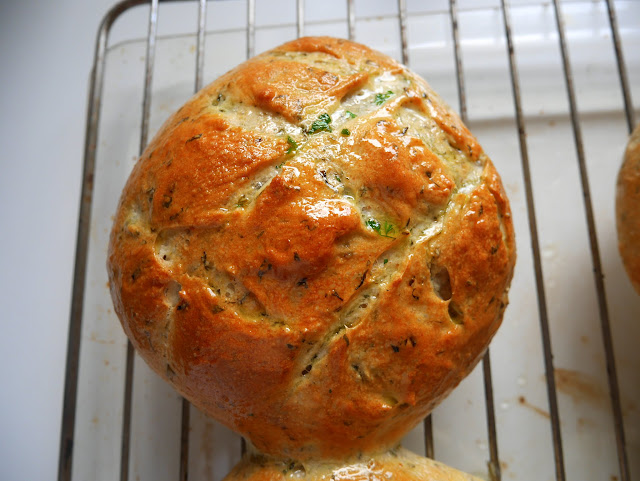 The shine is because they are brushed with Olive Oil 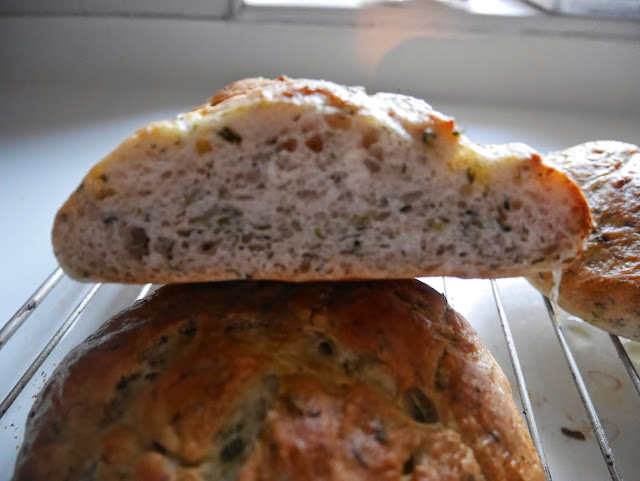 The latest was an attempt at Batard. A Batard is similar to the Baguette, except it the shorter and broader. The Batard requires a single slash. This is done with an old fashioned Safety Razor Blade. Even if I say so myself, the results were extraordinary. 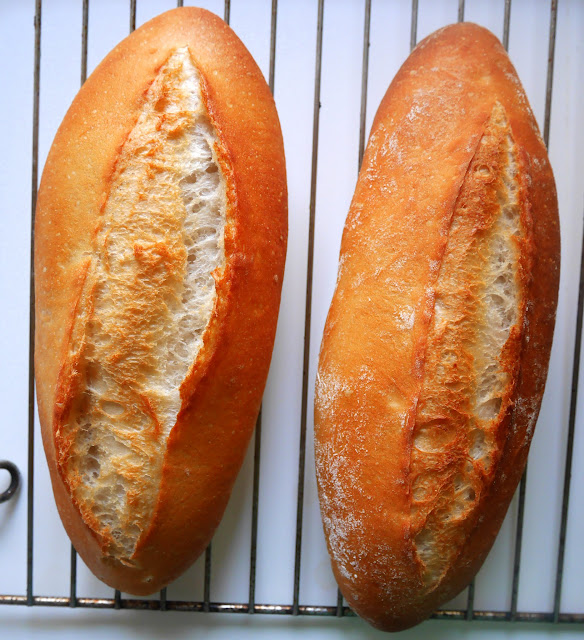 After the Batard, encouraged by the grand success, we made Walnut & Butter Rolls. I apologise for the lurid coloured cloth. These turned out very good. 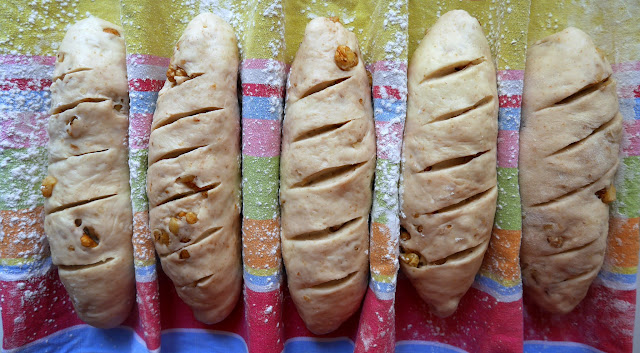 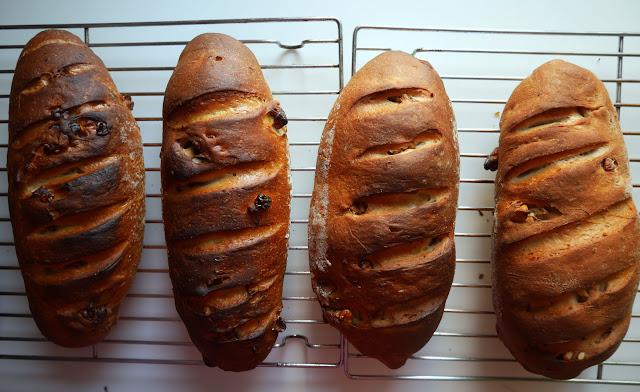 In balance, while no doubt the adjustment of the water, the shaping and the baking temperatures made a difference, I think the use of the Sourdough Starter was what made the biggest change. The texture of the bread has changed for the better. It is surprising how buying a new book can make such a difference to a simple thing like bread.

Posted by Stonethrowers Rants at 6:05 PM