My experiments with Amitabh Bachchan's endorsements

Everyone knows who Amitabh Bachchan is, unless they live under stones. Wikipedia describes him as “....an Indian film actor. He first gained popularity in the early 1970s as the "angry young man" of Hindi Cinema, and has since appeared in over 180 Indian films in a career spanning more than four decades. Bachchan is widely regarded as one of the greatest and most influential actors in the history of Indian Cinema.”

Amitji is very highly respected and held in high esteem – I have to refer to him as Amitji out of respect. Everyone respects him, whatever the terms respect may mean. His persona has changed from being the angry young man to almost god-fatherly, one who is looked on with much reverence. He has great gravitas and his anchoring the Hindi version of Who Wants To Be A Millionaire lent him even more dignity and presence. Amitji became a darling of advertisers who used his personality to promote and endorse several products.

I am not a fan of Bollywood, the industry Amitji belongs to. Therefore the chances of being influenced by his endorsements are remote. This, I realised, was not typical. I thought to myself that if a product is good enough or Amitji to endorse and presumably put in his mouth, it must be fantastic. So I decided to try two of the products he endorses. One is a new cookie called Gold Star made by Parle biscuits and the other is a ready noodle called Maggi Hungrooo made by Nestle. Both products have really nice advertisements.

First up was Gold Star. Have a look at the advertisement by clicking here. Now does that advertisement not make you want to buy the cookie right now? So I did, I bought a packet of Gold Star Chocolate and Nut cookies. I opened the packet and disappointment started to mount. The cookies were a most dull, depressing unappetising brown. They looked horrible. They were not golden which is what a good bakery product should be. These epitomised brown. Steeling myself, I took a bite. Crashing disappointment. I have not eaten sawdust. Earlier I could only imagine what sawdust would have tasted like. After eating the biscuit, I am convinced that the biscuit was sawdust. Dry, crumbly, powdery, un-luscious, with a sour medicinal aftertaste, the cookies were horrible. The cookies tasted of nothing, no chocolate no nuts, just an underlying medicinal aftertaste. I was very disappointed. 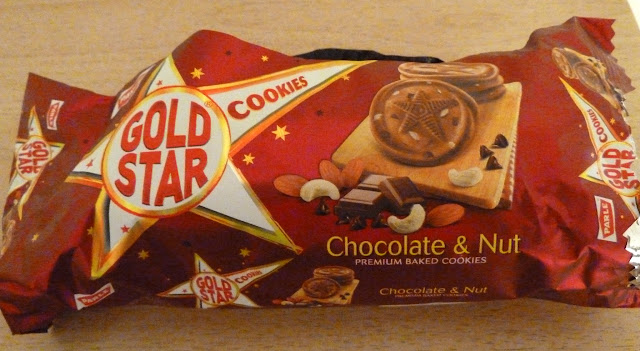 Don't buy these biscuits. Amitji is a liar.

Next up was Maggi Hungrooo. Most delightful advertisment. Maggi Hungrooo is a larger pack of noodles with, would you believe it, 50% more masala. I had not eaten Maggi noodles in years, several years. The last time, I can recall eating a packet of Maggi noodles was circa 1979-1980 when Maggi noodles were the staple of any picnic we went for. One friend had discovered that adding lashings of butter to the noodles considerably improved the taste. I recall with fondness that memory.

Anyway, I decided to follow the instructions on the packet to a `T’ to ensure that I got the best possible result. Making a packet of Maggi noodles did require some cooking, this was not a ready to eat food like a cookie. So first I separately blanched some Carrots and French Beans in salted water. Then I plunged them into iced water to stop cooking and lock in the vibrant colour. It would be a snitch to simply add these delicious healthy vegetables to the noodles. And remember, no oil. No sir, this was a preparation without any oil. 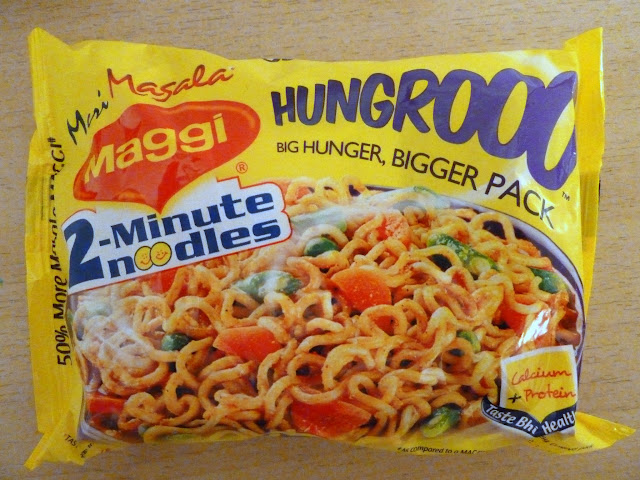 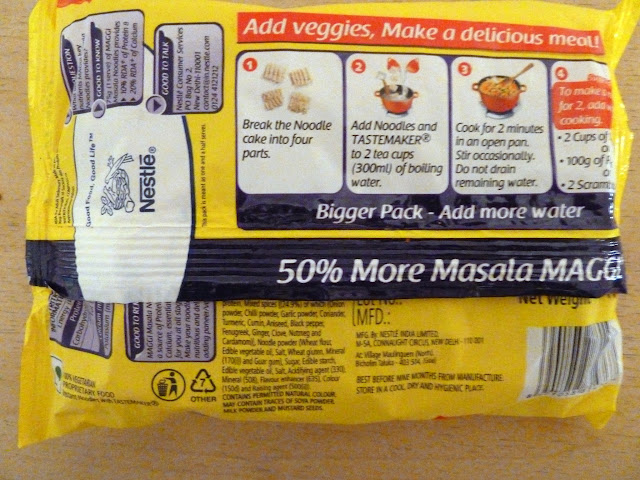 Once the vegetables were done, I set about making the noodles. I broke the noodles into 4 as directed only to find a lot of crushed noodles on my kitchen counter. I collected every morsel. Then I carefully measured out the 300 ml of water required, brought it to a boil, put in the Tastemaker only to find clumps of Tastemaker. Arrrrgh. Problem!!! All `golas’ of masala. Not good. So I brought out the whisk broke the clumps and was ready to go. I added the Noodles cooked on an open pan stirring gently and added my blanched vegetable. Two minutes later, the noodles were raw `katcha’ as we say. A minute more and they seemed ok.

The whole lot was poured into a bowl; I took a photograph and started to eat. Frankly, not bad. Not bad at all. I used one packet of Hungrooo and added some vegetables and I found the resultant quantity quite large. I guess if I was 25 or 30 years younger and at a picnic this would have been inadequate, but at lunch this was just fine.

All in all, I agree with Amitji. I too would eat Hungrooo. Honestly, you could really eat this and you do not have to be on a picnic or an adolescent.

So, dear readers, that was my experiment with Amitabh Bachchanjis endorsement. My conclusion, don’t believe the hype. The disturbing question for me is that Amitji also endorses Binani Cement. Wonder if that is as good as Amitji says it is. If not we are going to have a lot of buildings falling.

I showed this post to HRH the Queen of Kutch who worked for several years in the advertising industry. Her candid opinion is that I need to get my head examined for believing that Amitji or for that matter Shah Rukh Khan or Aamir Khan et al believe in anything they endorse. I am confused. I thought that was the whole point of endorsements.

Posted by Stonethrowers Rants at 8:05 PM