The Masala on masala

What is a masala? One answer, I repeat, one answer, could be a combination of spices, condiments and herbs that are pureed, blended or mixed together to form a basis for any preparation. So, if you were to say, mix ginger paste, garlic paste, green chilli paste and cumin powder that would be a masala. A masala could be a powder, i.e. dry or a paste formed by adding some wet or moisture containing ingredients. Why is chutney not a masala? Well, technically I guess it is, but the difference is that chutney is ready to eat unlike a masala paste which is a base for a preparation. So then what is Chicken Tikka Masala? That is an incorrect name given to dish that was created outside India.

Masalas are omnipresent in Indian food. Families have masalas that are handed down from generation to generation. The mixing of masalas, the amalgamation and morphing of recipes from family to family must have been fascinating. A young bride, fully trained by her mother carried a recipe book to her marital home. Did the book get junked and was all the training in vain? Did she start helping her new mother in law by making food the ma in laws way or did she also sneak in her favourites. Absolutely fascinating to think about those dynamics.

My great grandmother from my father’s side had a proprietary masala which she used when cooking almost anything. This magical masala made her food slightly different from the food cooked by others in the community. Her daughter i.e. my grandmother was rather different from clichéd grandmothers. She could barely make herself a cup of tea. So the daughters in law i.e. my mother and her three sisters in law were given the recipe for this masala which they use to this day.

This recipe was given to us by my mother a few years ago and it remained in the file. Every year we were given a small bottle of the masala which my mother had made. So a few days ago, we thought what is the point of all this training from Le Cordon Bleu, all the money spent if we could not even make this masala? Being mid November the weather is dry and this is the time to buy spices to make the masala. Let me tell you, it was easier said than done. First, HRH the Queen of the Kutchies pulled out the recipe and found that it made a good 6 kgs of masala. So we scaled it down to 1/6 and set about making a kilo of masala.

Now armed with the list of ingredients we went to Dr B A Road Lalbaug where there is a string of shops with Khamkar written in large letters and a prefix to Khamkar in small letters. Obviously, the Khamkars are specialists in spices and try and capitalise on the surname. The less significant name of the particular Khamkar is written in correspondingly smaller typeface. We gave our order to the salesman who took it down and passed it on to a packer. Then we had a sneezing fit. One wiseacre in the shop had emptied a gunny sack of chilly resulting in a shop full of sneezing customers. Between sneezes we paid for our spices and left.

Next stage was to toast the spices to discharge all traces of moisture. Moisture is anathema to masala. This we did by placing all the spices in trays in an oven at 75C for an hour. We were now ready to have the spices ground. This is where the fun starts. 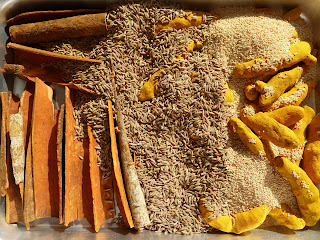 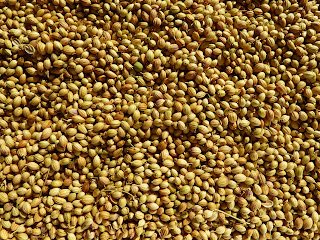 We asked all around but could find no one in Bandra West who could grind the spices. References were made to someone in Khar Danda who used to do it. But basically no one had a clue. Our friend Laju Bhatia said that his building watchman’s wife ground masala and he would get her to call. That call never materialised. Then HRH the Queen of the Kutchies called Jaffsons a spice shop off Hill Road who said he had a machine to grind but that took 30 Kgs at a time. HRH then asked at Jude Cold Store since they make and sell the East Indian Bottle Masala if she knew of a grinder. A call as made but that too reached a dead end. Looks like 1 kg was just too small a quantity. Finally, I called my aunt [one of the daughters in law] who said there was a masala maker in Bandra East who would do this. So we buzzed off to Bandra East Khernagar to Thorat. Here we hit pay dirt. For a princely sum of Rs 30/- they ground our spices.

We had a long conversation with the father son duo of Bajirao Thorat and Ajinkya Thorat on masala grinding. So here it is, all neatly dissected for you to understand. 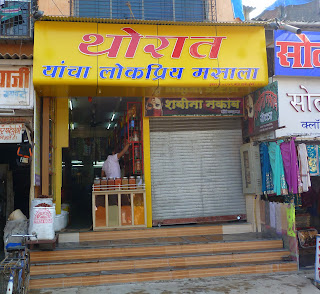 There are two methods by which one can grind spices to make a masala one is by using a piston method, much like a mortar and pestle and the other is to use a set of grinding wheels.

The piston method was something that was done by women who turned up in your building or colony armed with a few stout lathis and a wooden bucket. The spices were put into the bucket and literally pounded to dust by these women. Entire communities used to get their yearly supply of masala made at one time. People made chilli powder, turmeric [haldi] powder, cumin [jeera] powder, coriander [dhania] powder by this method. You ensured purity of the spice and you could buy as good or as bad quality of the whole spices as you desired. Some of the older readers may recognise the photo. This is virtually nonexistent now. People today either buy packaged spices or grind small manageable quantities every so often in their Mixies at home. Why is this so? Is the increase of nuclear families and corresponding fall in joint families a reason? Is changing food habits a reason? Worth thinking about, but in another Blog.

This piston method was used on a slightly more efficient scale by shopkeepers who installed machines that did the job. The catch here was that the machines were operated by humans who stamped on pedals that then operated the pistons. Now the entire process is automated and a motor drives the pistons. 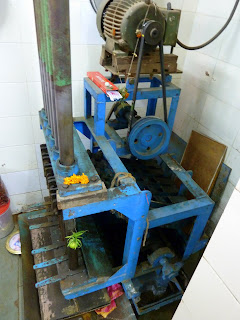 The other method to make spices powders is the grinding wheels. Masala grinders install Flour Mill machines and use them to grind spices. This is a much quicker method but required a much larger quantity of raw material to be cost effective.

I was told by the Thorats that the piston method resulted in a far better end product. The pistons generated no heat which the grinding wheels did and therefore the spices did not burn with the heat. Secondly, the grinding wheels always contain a residue of the previous spices ground, therefore your masala was always diluted, mixed or adulterated, albeit unwittingly. It was just the nature of the beast. The Thorats said that their main customers were still housewife’s who loved and respected their homemade masalas [Gharguti Masale to use a Marathi word] and would not dream of buying commercial premixed pre ground masala.

So it was a productive 3 day effort and the weekend was well spent. The masala is now in bottles and smelling great. Can’t wait to make some of the food that my father’s side of the family makes, like Vaalachi Usal or Ras Batate. This weekend probably.

If anyone wants the recipe for the masala let me know. I will be happy to share it. This is the time of the year to make it.
Posted by Stonethrowers Rants at 6:49 PM