It was an absolutely glorious day. The sun was shining in all its glory, the temperature was a wonderful 12 C [55 F] and a light breeze was blowing. Everyone was out enjoying the sun. So after a heavy breakfast [by our standards] - regal Eggs Benedict for HRH the Queen of Kutch and more humble Fried Eggs with a Sausage for me - washed down with Carrot juice for me and Grapefruit juice for HRH the Queen of Kutch, we headed out on a long walk. The plan was to go to the `City’ and look at the fantastic modern buildings that have come up over the years.

You must have read or heard the words Gherkin, Cheesegrater, Walkie Talkie and Shard. These are nicknames for the latest bizarrely-shaped tower blocks to appear on London's skyline, to mixed reaction and sometimes unexpected consequences.

The idea was to see these buildings as well as the several others that dot the City.

In an earlier post I had written about our walk thru `Royal London’. You could read about it by clicking here.

The walk was to start from St Pauls Cathedral and wind our way thru the `City’. I did a bit of research on the internet and found a wonderful website hosted by the City of London [a Government site] giving you all kinds of information on the buildings. The site also had a walking route mapped out. So armed with this route, my trusty camera and the wind on our tails we set out. The route was to take 90 minutes. We took almost 5 hours, walking this way and that, stopping to take photos, losing our way among the many roads, crossing roads to get better photos and simply gazing at the buildings.

What struck me the most was that these buildings are not very large by American skyscraper standards. What was more striking to us was how close these buildings are to each other. There is no `compound’ around the buildings. The buildings are literally, cheek by jowl. Getting a photograph was in many cases difficult for precisely these reasons. There was no way one could step back, put some distance between the camera and the subject and get a photo. There was no space at all. What amazed me was how these buildings were constructed. There is simply no space between building, despite that, large trucks, larger cranes all enter and exit, carrying debris and construction material without disrupting traffic.

The City of London and its environs are characterised by relatively low-rise buildings laid out on an essentially mediaeval street plan. Designing infill buildings in this context is a delicate balancing act between commercial requirements, the need for flexibility, and respect for the areas historical character and traditional materials.

These new buildings that are changing the landscape of London and as you can imagine have been at the heart of a lot of controversy. Not just are they  sky-reaching glass and steel structures,  but they are all constructed at a kissing distance from all the iconic architecture of London like the St Pauls Cathedral and the London Bridge.

City of London chief planner Peter Rees, who has overseen its dramatic, vertical transformation since the 1980s, says: "Buildings like the Gherkin, Cheesegrater and Walkie Talkie are clear representations of how well London is doing.

I must point out that in the best principle of honesty and transparency and the highest ethics some of the facts in this post are copied [with necessary adaptations and language change] from the City of London website.

Our first stop right behind the St Paul’s Cathedral courtyard was Temple Bar. This was a historic gate leading into the old City of London. Behind Temple Bar was Paternoster Square an urban development. The area, takes its name from Paternoster Row - Pater Noster is Latin for `Our Father’. The Paternoster Square as well as St Pauls Cathedral, was devastated by aerial bombardment in World War II. In Paternoster Square is a column situated at the focal point of the Square. The Paternoster Column stands 23.3m tall and would you believe it, is part of a ventilation system for the traffic gyratory and the car park beneath. This was constructed in 2003 so is virtually brand new. Looks mighty old though. On the top of the Column is a copper urn guilded with gold with a flame finial. This was to represent the two times the area was destroyed by fire – in the Great Fire in 1666 and during WWII. 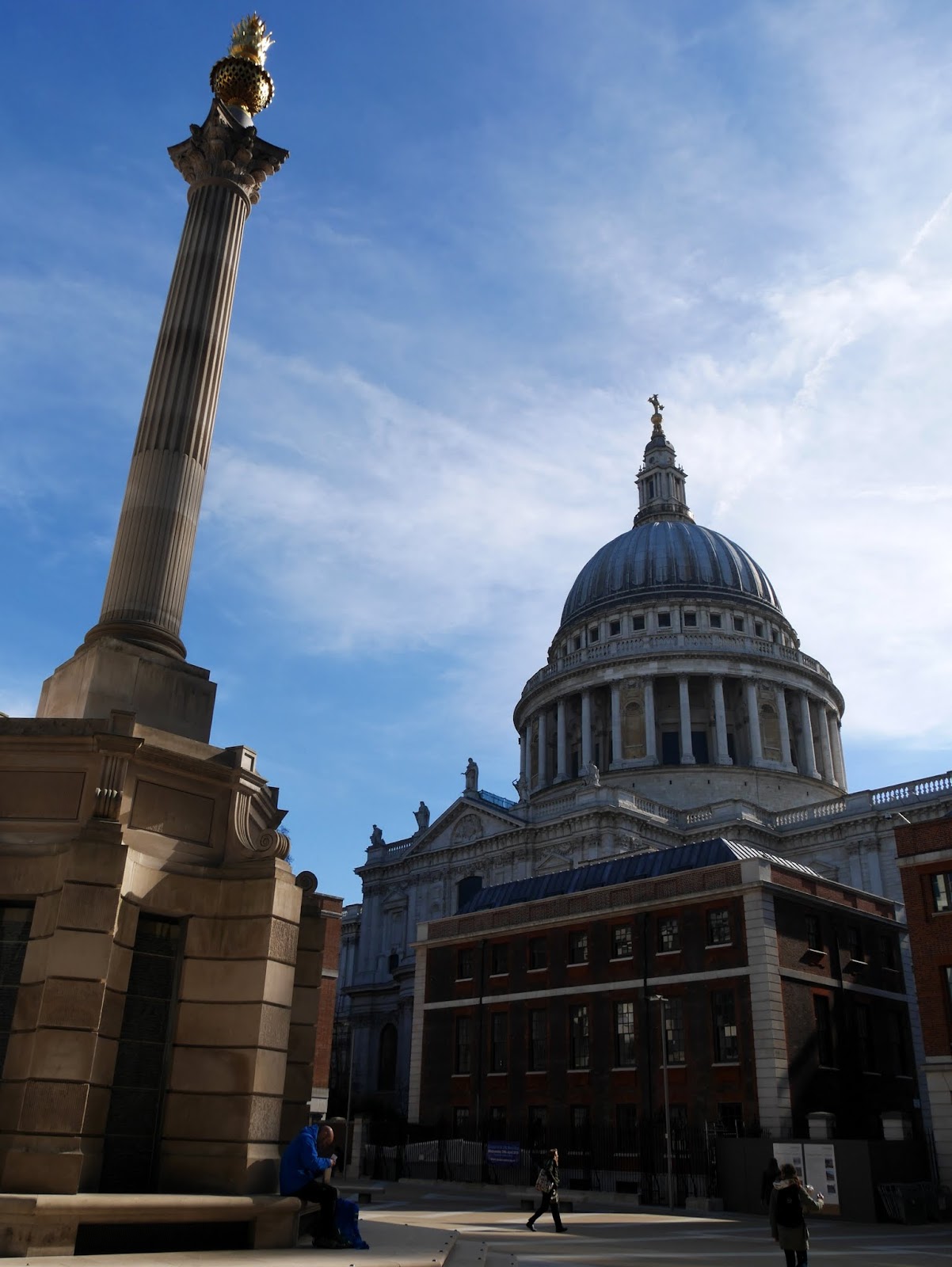 Now started our walk. I am not going to bore you with details of each building. Suffice to say, each of  them they have a fascinating architectural background. You can enjoy some photographs. I am however giving you some background on some of the new iconic building later on in this post. 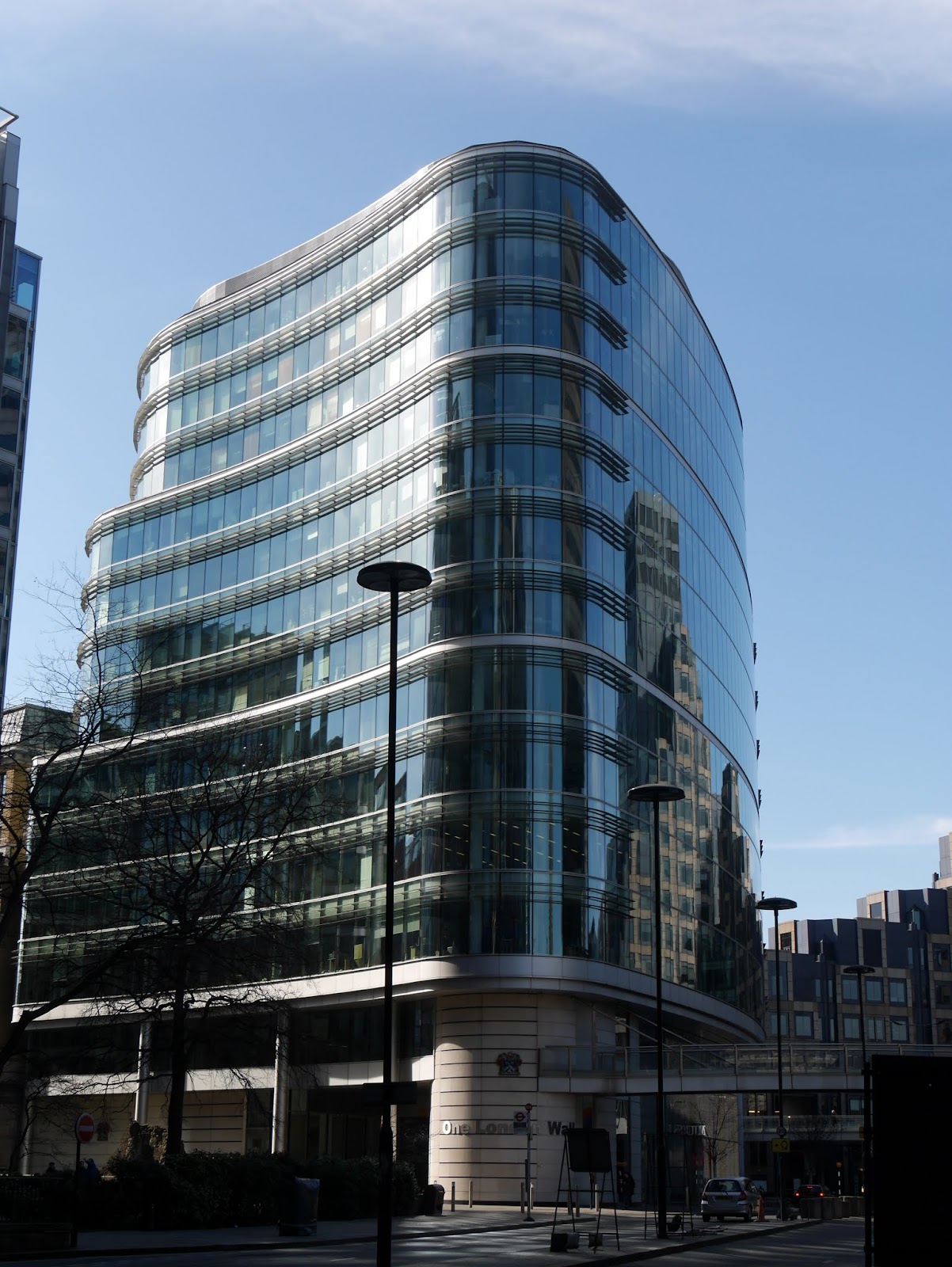 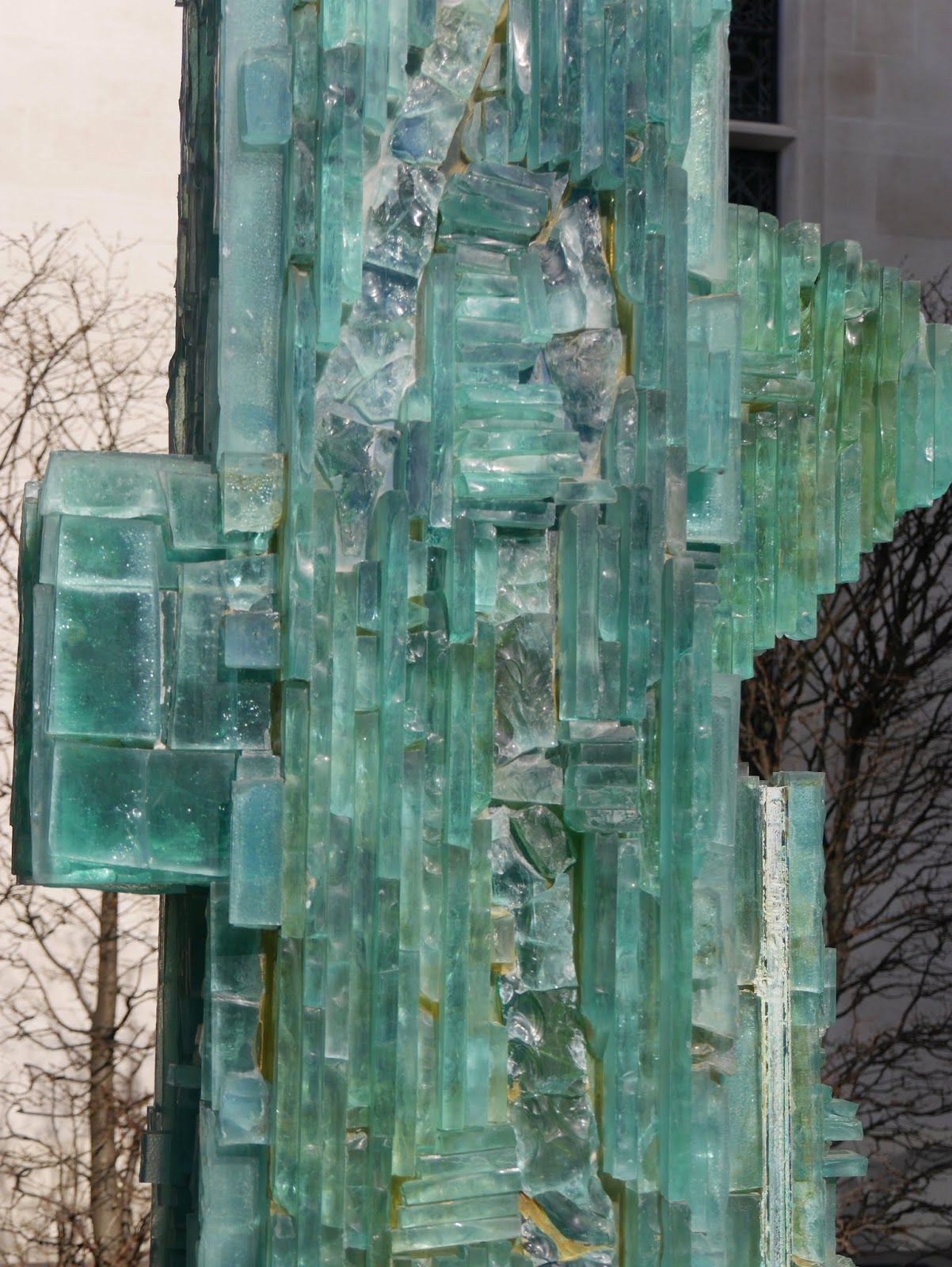 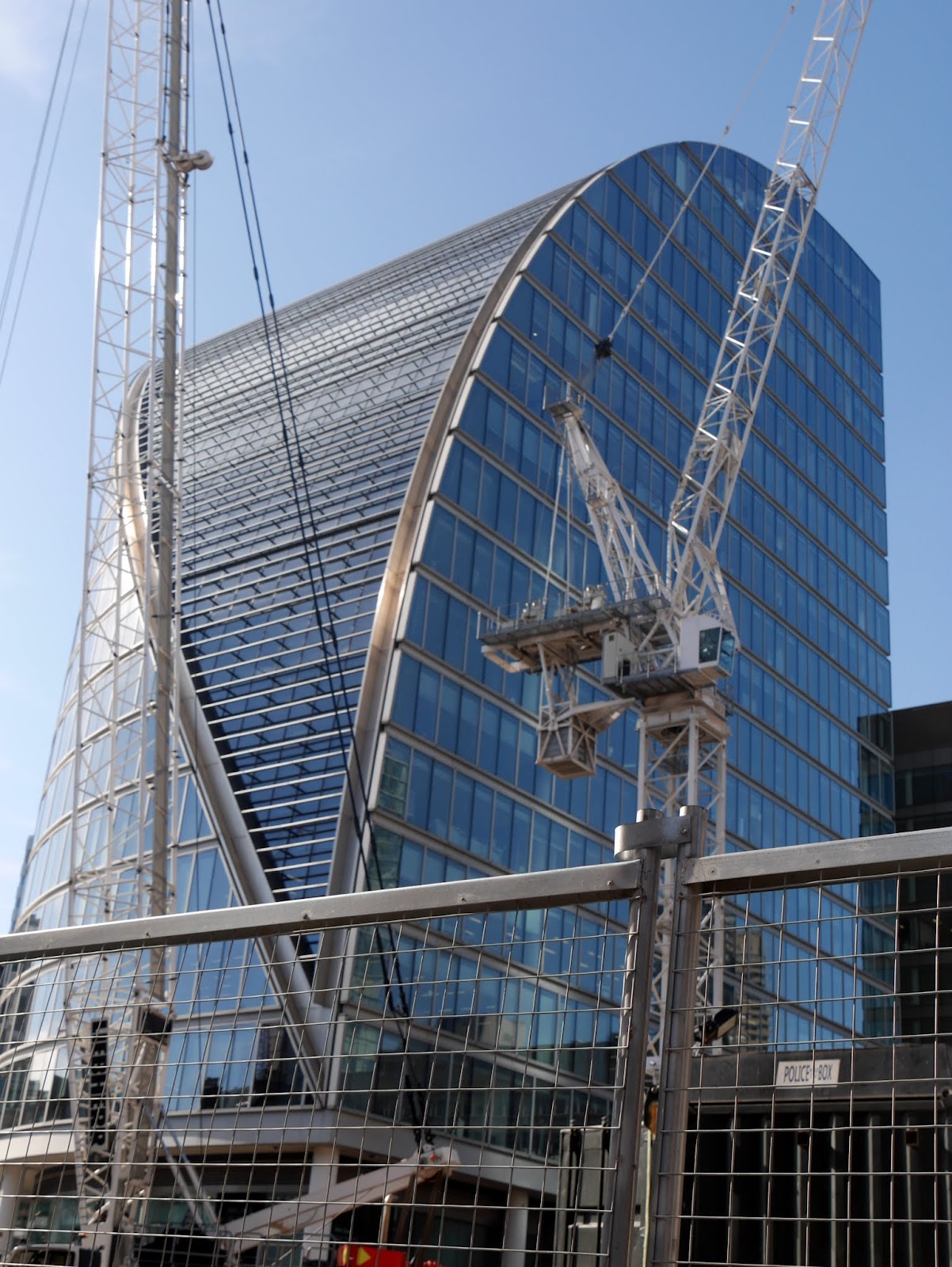 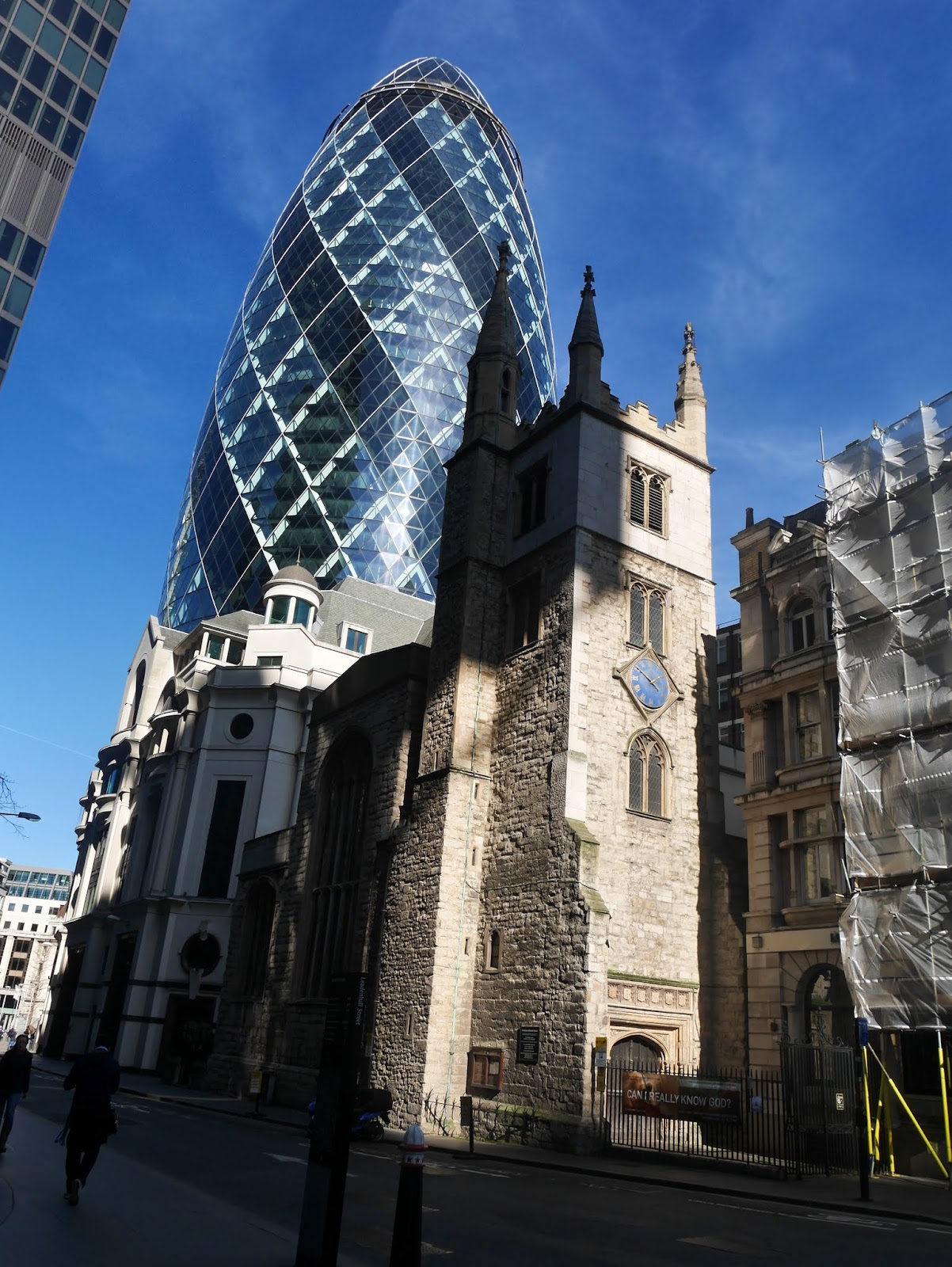 ‘The Gherkin’, this has become an instantly recognisable addition to the City’s skyline. The building has a circular plan, widens in profile as it rises and tapers towards its apex. This distinctive form responds to the constraints of the site: it appears more slender than a rectangular block of equivalent size, and the slimming of its profile towards the base maximises the public realm at ground level. At the top, some 180m high, a restaurant and hospitality area offers 360º views of London. Designed by Foster + Partners, it won the RIBA Stirling Prize in 2004.

30 St Mary Axe (widely known informally as The Gherkin and previously as the Swiss Re Building) is a commercial skyscraper in London's primary financial district, the City of London. It was completed in December 2003 and opened in April 2004. With 41 storeys, it is 180 metres (591 ft) tall and stands on the former site of the Baltic Exchange, which was extensively damaged in 1992 by the explosion of a bomb placed by the Provisional IRA in St Mary Axe, the street from which the tower takes its name.

The building has become an iconic symbol of London and is one of the city's most widely recognised examples of contemporary architecture. 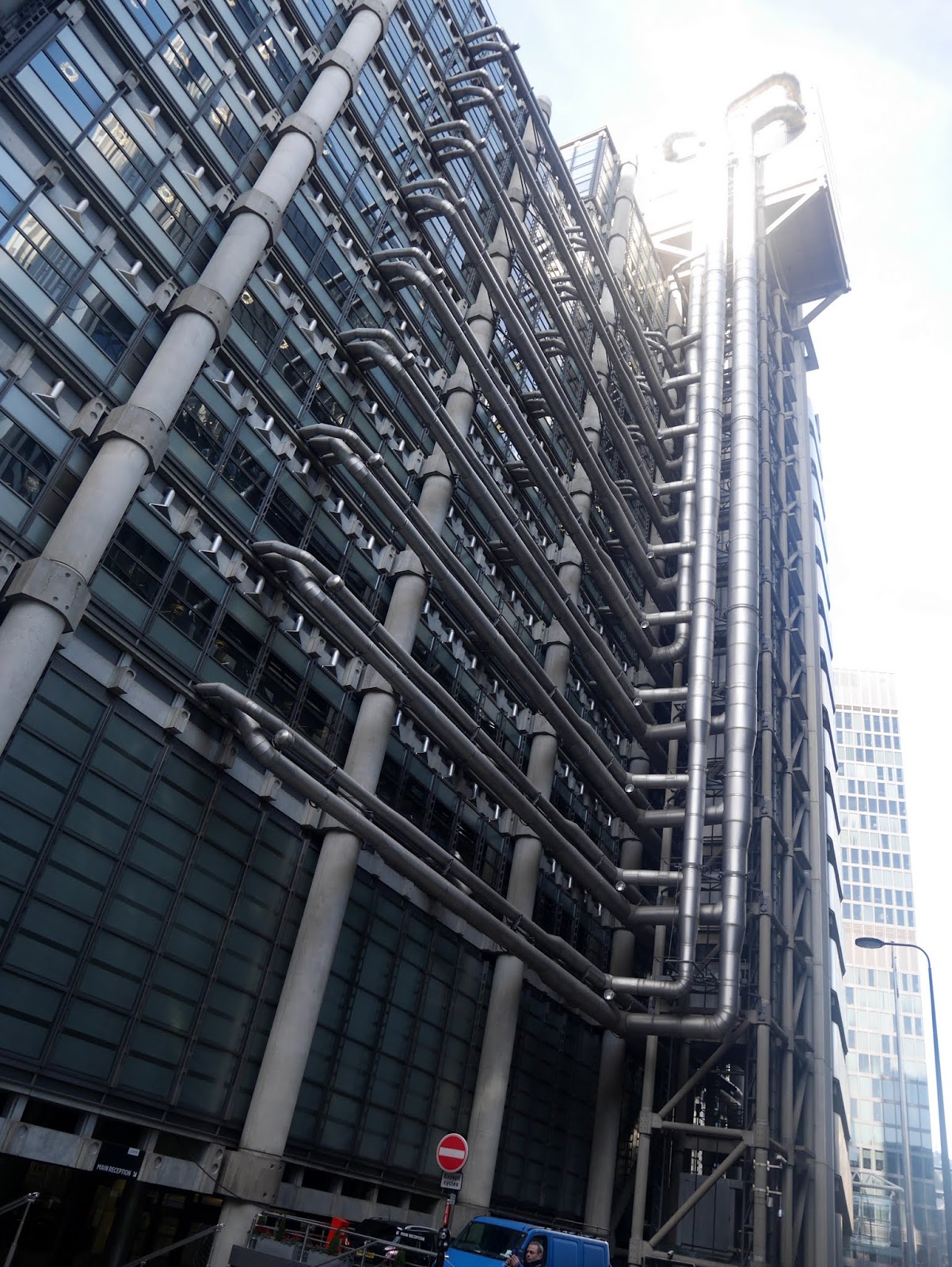 Richard Rogers’ famous ‘high tech’ modernist icon expresses its structure and exposed services on the outside, freeing up the interior. The building consists of three main towers and three service towers around a central rectangular space. Revolutionary as it was, the Lloyd’s Building still succeeded in complementing the City’s existing architecture.

The Lloyd's building (sometimes known as the Inside-Out Building) is the home of the insurance institution Lloyd's of London. It is located on the former site of East India House in Lime Street, in London's main financial district, the City of London. The building is a leading example of radical Bowellism architecture in which the services for the building, such as ducts and lifts, are located on the exterior to maximise space in the interior.

Prince Charles was a particular critic of this new style of architecture. “You have to give this much to the Luftwaffe,” he remarked at the time. “When it knocked down our buildings, it didn’t replace them with anything more offensive than rubble.”

Twenty-five years after completion in 1986, the building received Grade I listing in 2011; it was the youngest structure ever to obtain this status. It is said by English Heritage to be "universally recognised as one of the key buildings of the modern epoch". 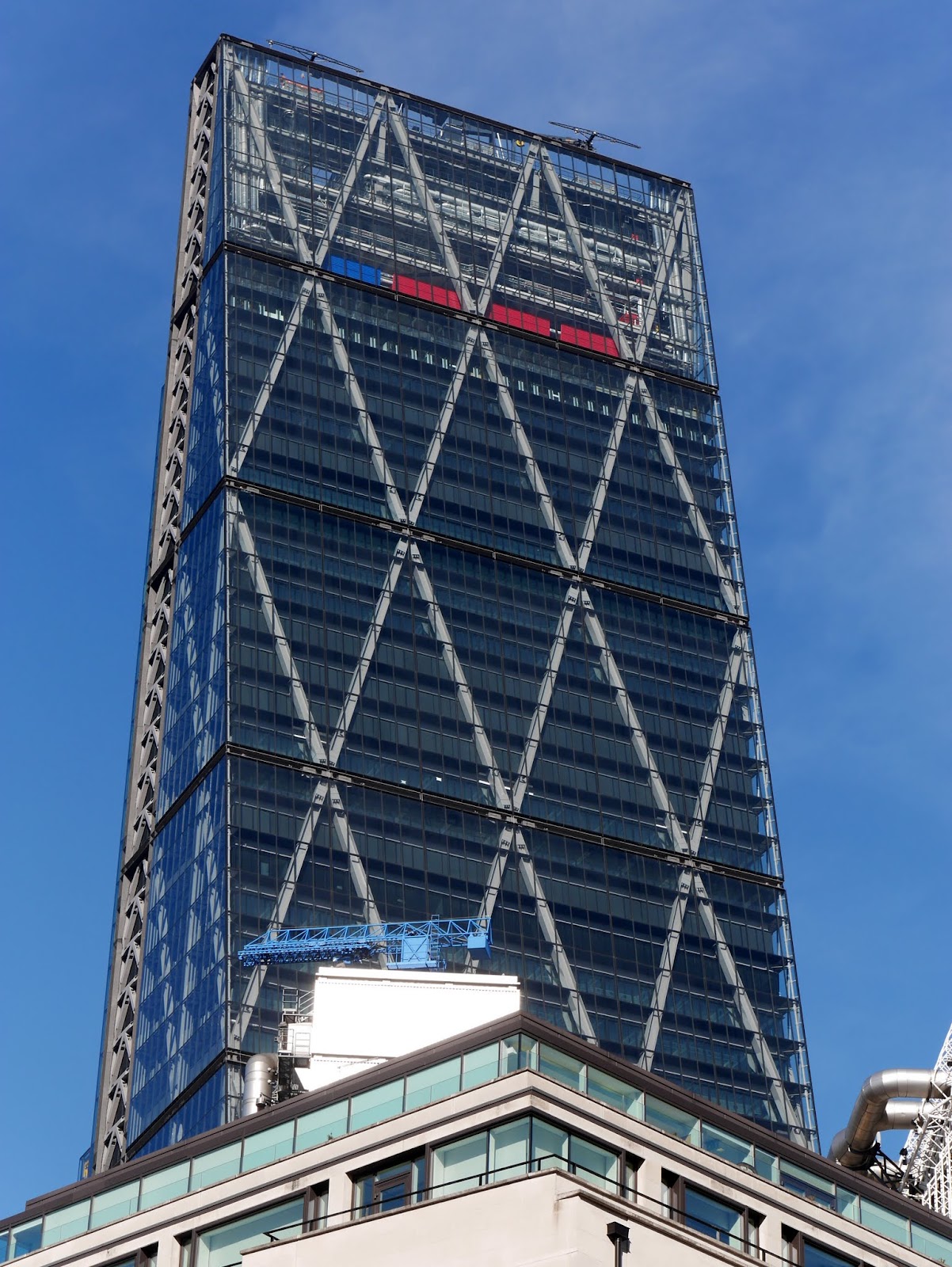 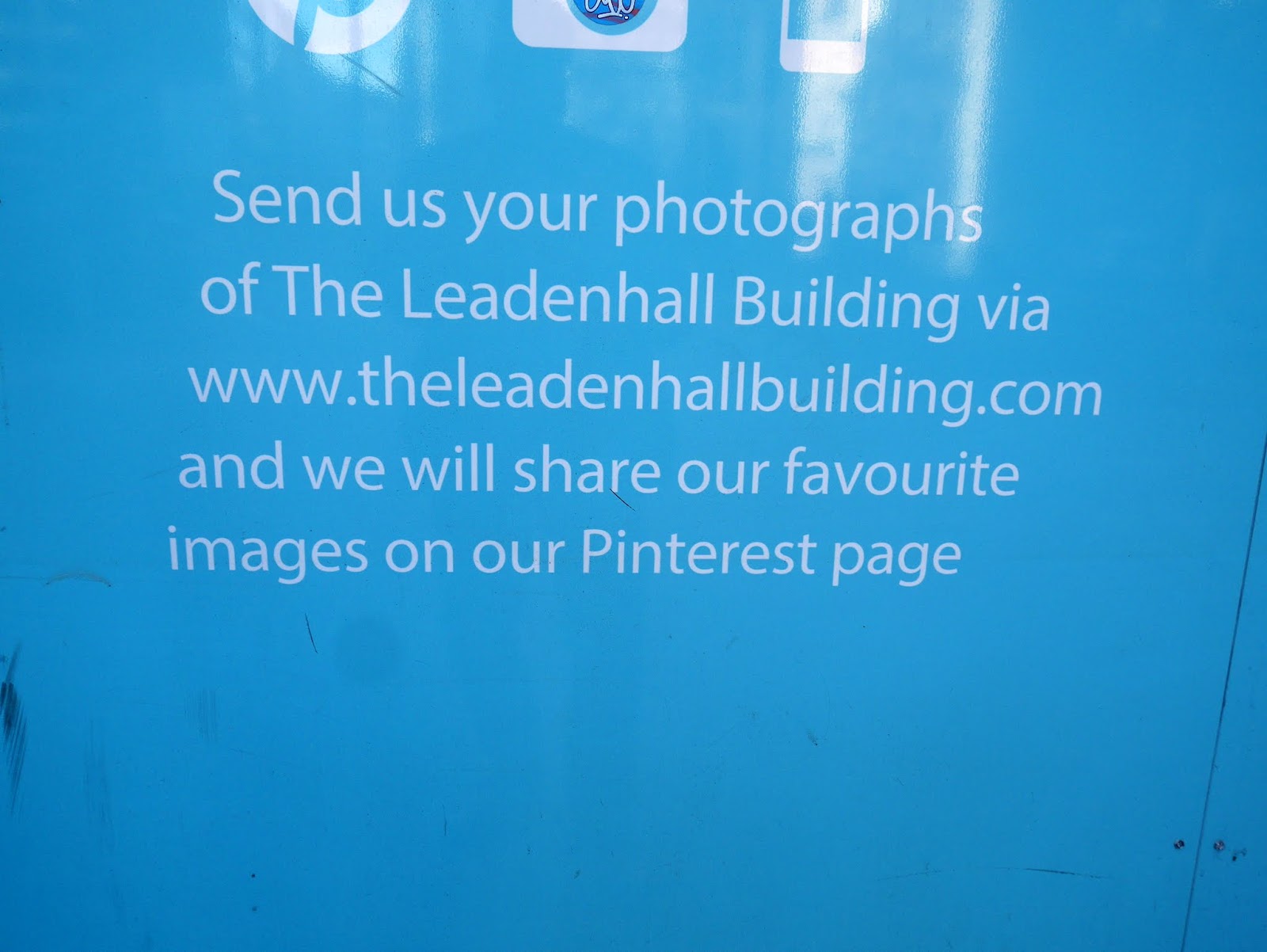 This site is to become home for a new tower designed by Rogers Stirk Harbour + Partners, with a distinctive tapering form designed to protect views of St Paul’s Cathedral. The triangular shape led it to be called ‘The Cheesegrater’. Rectangular floor plates will be unencumbered by internal columns and the building’s services are contained in a separate structural element to maximise net floor space. The base will form a six-storey public space with shops, cafes and restaurants

But Leadenhall also marks a bigger milestone than that of the interesting evolution of an architectural practice’s signature style. As the City’s “tallest” building and the first one since the Gherkin to interrupt the famous processional route from Fleet Street to St Paul’s, it provides yet another opportunity to assess the enduringly fractious urban relationship between tall buildings and London’s historic fabric.

So the skyscraper isn’t just a symbol of capitalism, it is capitalism materialised in steel and glass. It is a machine to extract rents from the skies, and the skylines of cities across the world are bar charts of property values. For many people, this is precisely the problem, as the tall building’s shadow turns streets into darkened canyons, and its arrogant erection demands that everyone pays attention. 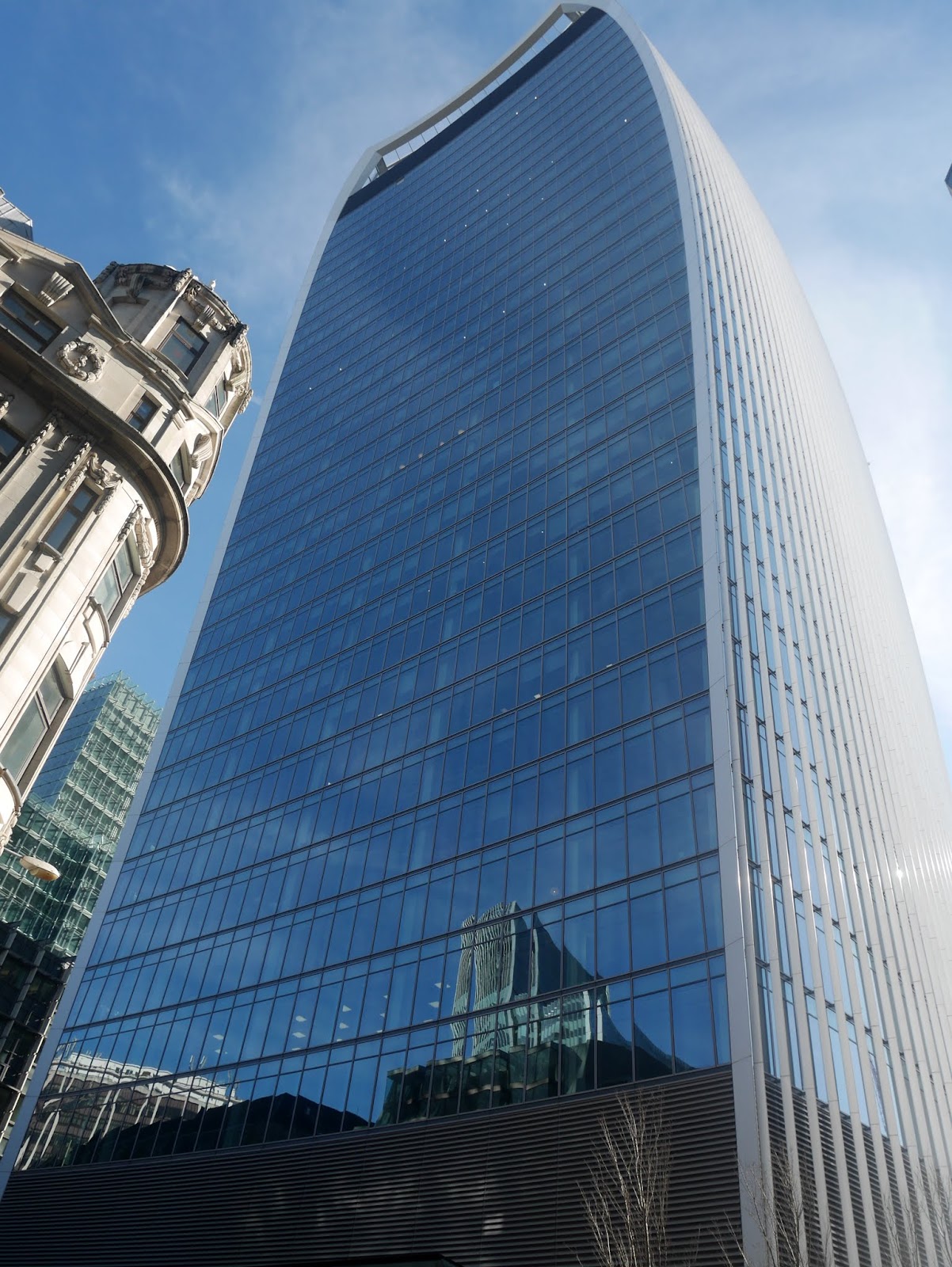 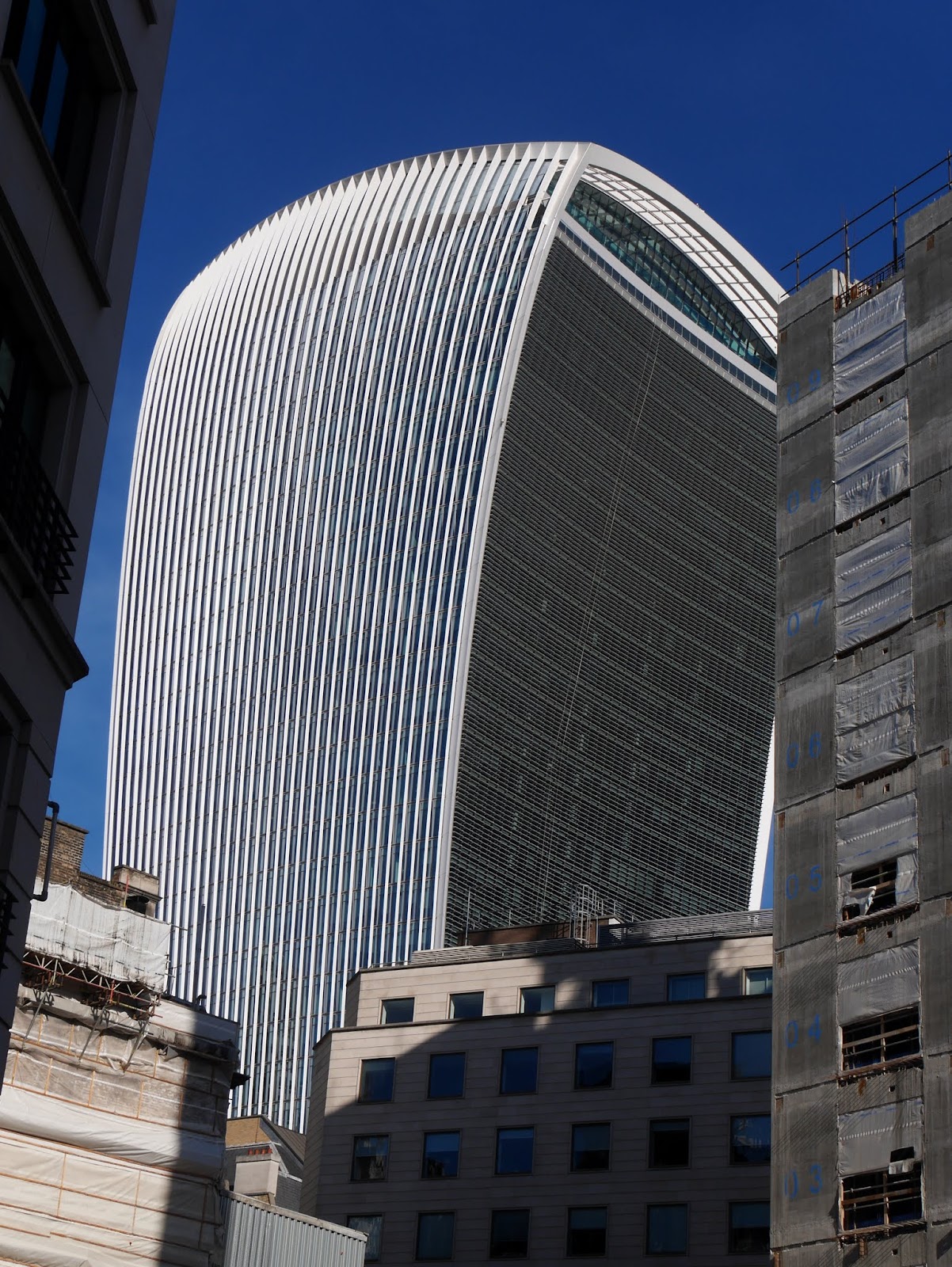 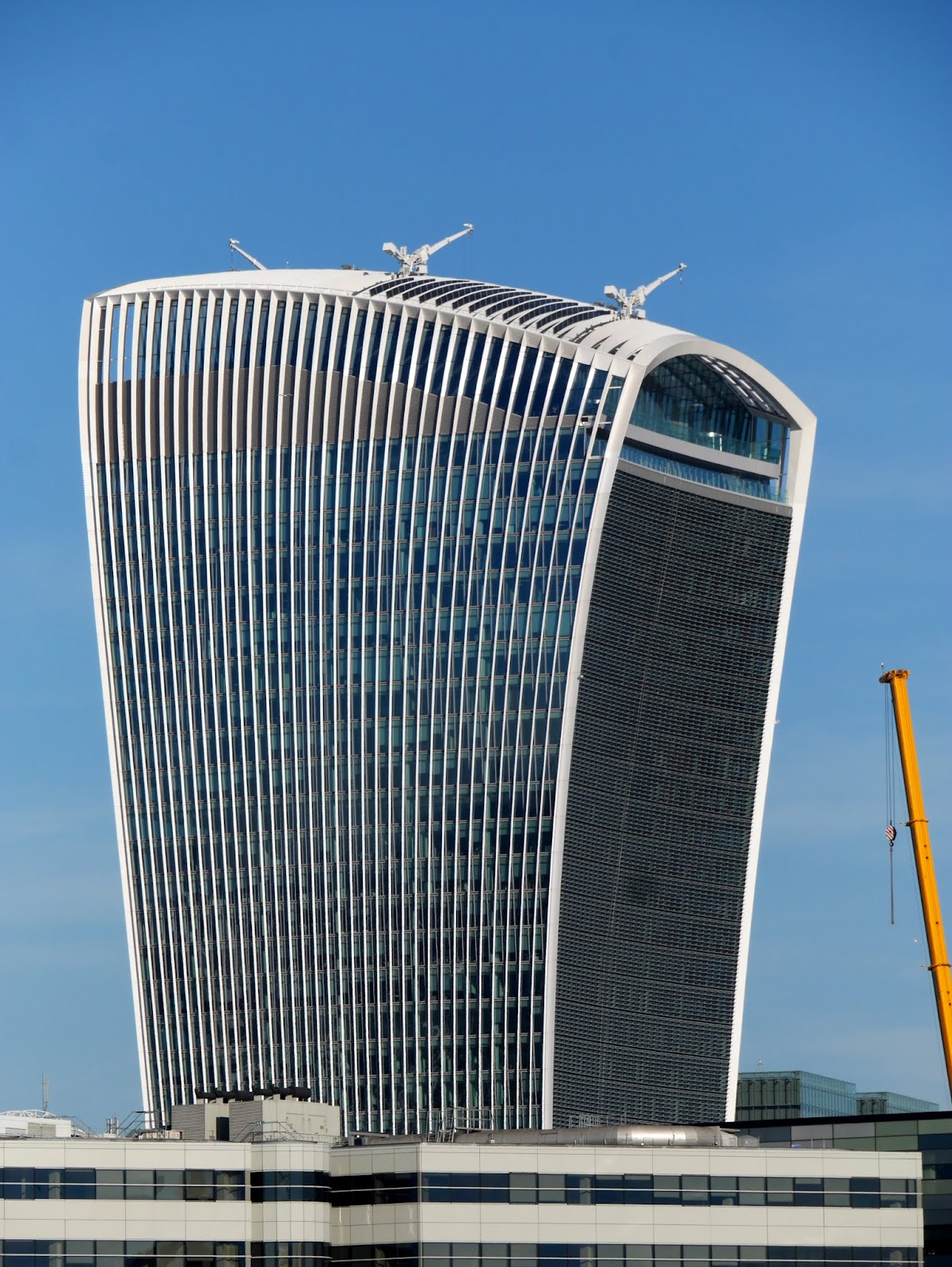 Nicknamed ‘The Walkie Talkie’ and also called the `Death Ray Building’ or `Walkie Scorchie’, this new 155m tower will have its largest floor plates at its summit, not its base. Designed by architect, Raphael Viñoly, it will incorporate office accommodation, retail, a café and a publicly accessible Sky Garden over three floors. The garden will be the highest public park in London with an outside roof terrace, restaurant and a 360º panorama of London.

20 Fenchurch Street is a commercial skyscraper in London that takes its name from its address on Fenchurch Street, in the historic City of London financial district. It has been nicknamed The Walkie-Talkie because of its distinctive shape. Construction was completed in spring 2014, and the top-floor 'sky garden' was open in January 2015. The 34-storey building is 160 m (525 ft) tall, making it the fifth-tallest building in the City of London.

On an unseasonably hot September morning, Martin Lindsay parked his Jaguar on Eastcheap, in the City of London. Two hours later, he returned to find parts of his car - including its wing mirror and badge - had melted. It transpired the sun reflecting from the nearly-built 37-storey "Walkie Talkie" - nicknamed such because of its distinctive shape - was to blame.

Within days, Eastcheap was not only under the full glare of the sun, but also the world's media - who were reporting smouldering bicycle seats, singed doormats and even eggs being fried on the street.

Now you know why it is also called the Death Ray Building. 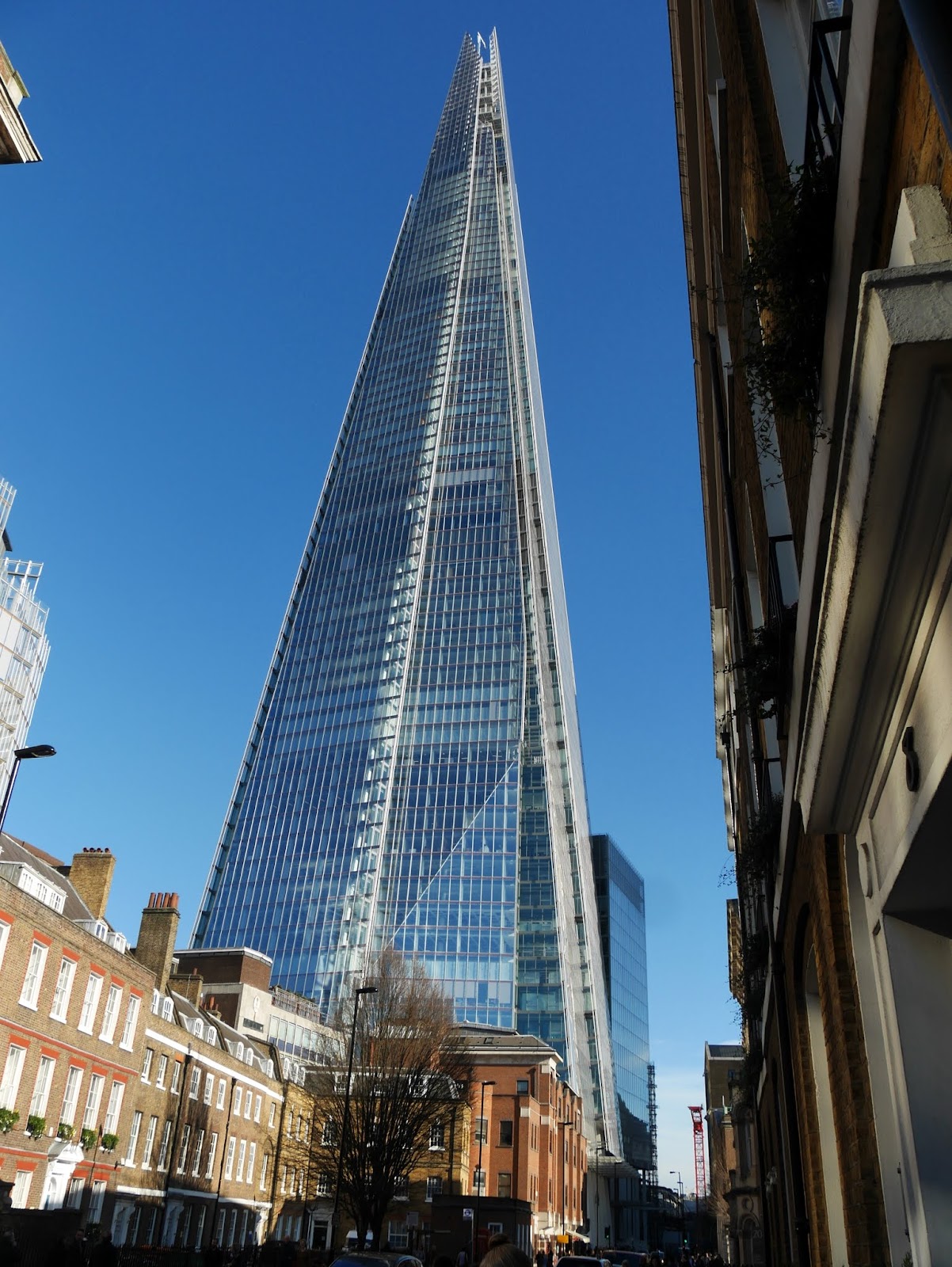 The Shard also referred to as the Shard of Glass, Shard London Bridge and formerly London Bridge Tower, is an 87-storey skyscraper in Southwark, London, that forms part of the London Bridge Quarter development. The Shard's construction began in March 2009; it was topped out on 30 March 2012 and inaugurated on 5 July 2012. Practical completion was achieved in November 2012. The tower's privately operated observation deck, The View from The Shard, was opened to the public on 1 February 2013.

Standing approximately 309 metres (1,014 ft) high, the Shard is currently the tallest building in the European Union. The glass-clad pyramidal tower has 72 habitable floors, with a viewing gallery and open-air observation deck on the 72nd floor, at a height of 244.3 metres (802 ft).It was designed by the Italian architect Renzo Piano

The reactions to London's latest mega-structure have not been moderate. "The Shard has slashed the face of London forever," wrote Simon Jenkins in the Guardian a month ago, invoking the destruction of Timbuktu, Dresden, Moscow and Peking, not to mention the bulldozing of the great Buddhas of Afghanistan. Jonathan Jones, the Guardian's art critic, has described the Shard as "self-evidently a monument to wealth and power run way out of control. It screams with dazzling arrogance that money rules this city and says money inhabits a realm way above our heads."

Finally, along comes something that is genuinely magnificent to look at – namely the Shard, as it has affectionately come to be known. I don't care about its function or who built it, or even who financed it. It is a masterpiece of visual design by one of the great living architects, Renzo Piano.

It was a day very well spent.

And to get you all back to Earth.here is another photo of the grand St Pauls Cathedral taken from the Millennium Bridge, 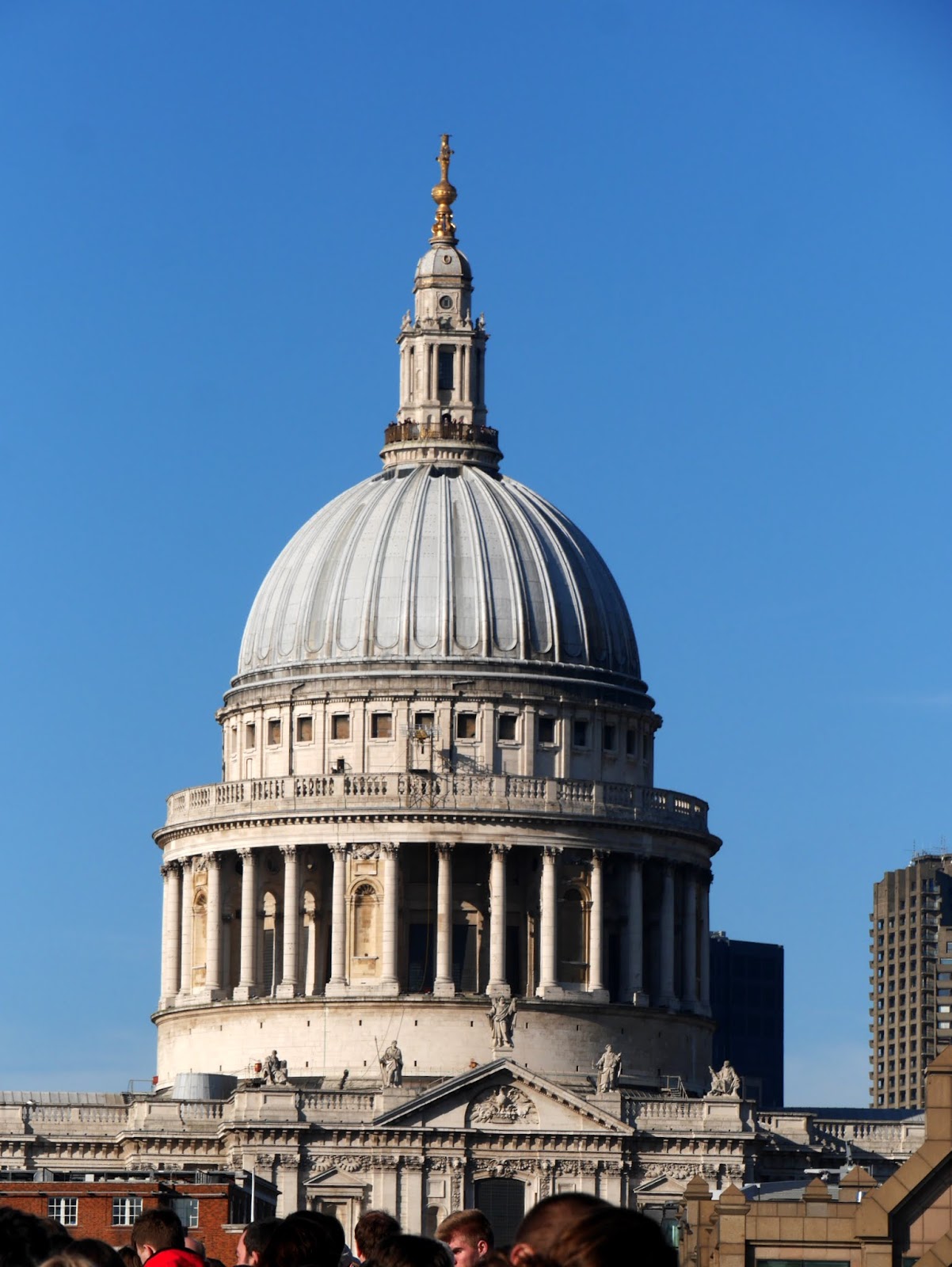 Posted by Stonethrowers Rants at 2:32 PM