Joel Robuchon is a chef of impeccable credentials. He was the holder of Michelin's Three Stars, Forbes Five-Star, AAA Five Diamond, and Wine Spectator's Grand Award. Joël Robuchon was named France's Chef of the Century by the esteemed Gault Millau restaurant guide. Then in 1995 at the age of 50 after seeing many of his peers falling to heart attacks and stress, he abruptly retired. But he soon found he could not keep away from the kitchens and after a break he was back. Today he holds a total of some 26 Michelin stars, more than any other chef. His mashed potato is legendary. While Heston Blumenthal reinvented potato chips [French fries] to make them crunchier from outside and fluffier from the inside, Robuchon devised a way for the potato to hold almost equal quantity of butter without splitting. More on that later.

L’Atelier de Joel Robuchon is a 2 Michelin star multi level restaurant in the Soho/Covent Garden – Theatreland area right next to the very famous Ivy. The whole place is done up in black and red. The staff uniforms are black with red accents. On level 0 is the more casual restaurant with 100 seats on counters while level 1 has 60 diners sitting at tables. Level 3 is the bar.

On arrival, after our coats were taken we were whisked to level 3 which was the bar. Swanky place done in a Japanese/Chinese Opium den kind of way all in black. I have never been to an opium den, but I imagine this is what one must look like. Lounge music playing in the background, a fireplace and lots of couples quietly speaking to each other in corners. HRH the Queen of Kutch had a Martini with Zubrowka Vodka, Peach and Lemongrass while I had a classic champagne cocktail with Champagne, Cognac, Orange Peel and Angostura Bitters. Once we had finished our drinks we were whisked downstairs to the dining room.

The dining room has an open kitchen. The ambience in the room was very active, lively and buzzy. The kitchen was pumping with the Chef calling out orders and yelling `service’ when they were ready. My God were they working hard. Two chefs were on garnish, and all they did was carefully garnish plates that came their way, working with long tweezers, chopsticks, spoons and squeeze bottles. Two chefs in Grade Manger [the cold kitchen] plating cold food. Lots of chefs behind grills, hotplates and ovens. All very busy. The chefs on the hot plate worked in what seemed a teppenyaki style of cooking, deftly tossing small pieces of meat using two spatulas. 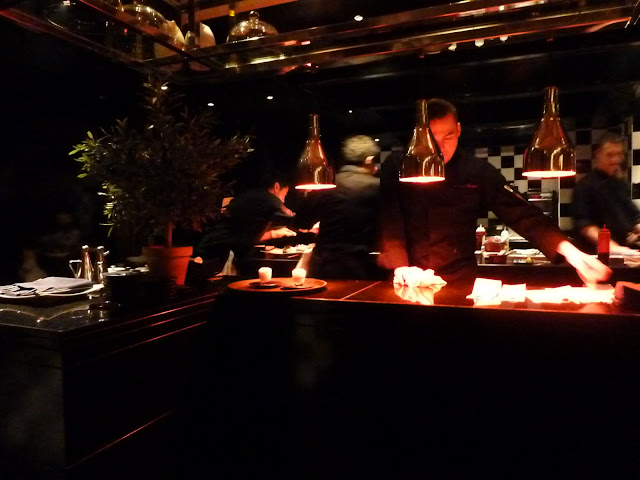 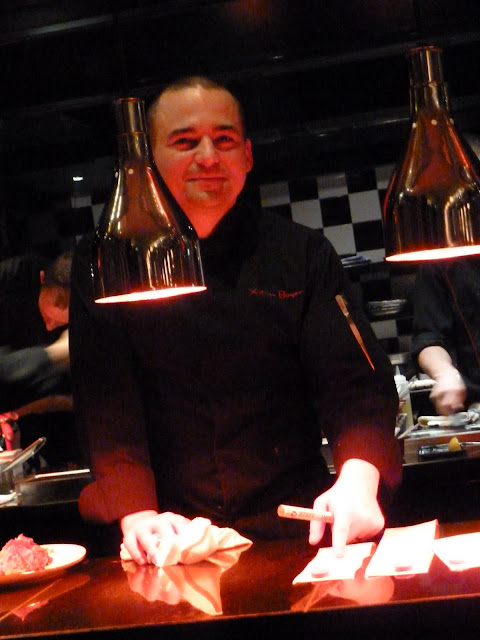 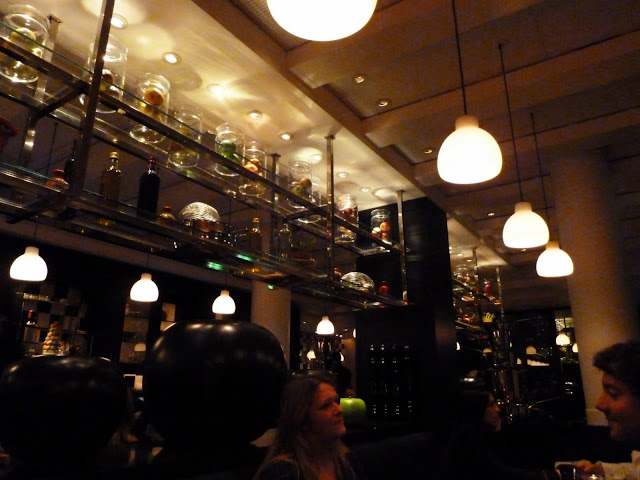 We had a choice of 3 menus.  A Tapas style menu with small tasting dishes, a regular a la carte menu and a multi course tasting menu. We chose the small plates; Tapas style and our waiter told us that we should order between us, 4 starters and 2 main courses.

Soon we got our amuse bouche. It was magical. A small glass of Parmesan foam, a layer of Balsamic and Truffle reduction and the bottom layer of Parmesan custard. The combinations were truly amazing. It promised to be a great meal.

The Crab Meat Waffles sounded most interesting. We got a `stone’ containing 3 waffles and a salad as garnish. We were instructed to drizzle some lime on the waffle before eating. We did so and what did we taste? An Iraqi Sandwich from Tavaa restaurant in Mumbai! It tasted exactly like a Chicken Sandwich would in Mumbai with the `Kothmir’ [Coriander] and `Kanda’ [Onion] in it. Not a bad dish by any standards but a crashing low for us since all we could taste was Tavaa!

A Terrine of Foie Gras with an Apple Jelly was on offer next with some toasted Sourdough bread. A decent Terrine, nothing unusual or extraordinary, just a Terrine that a French kitchen should be able to knock out with ease.

We then were served two Ravioli which contained Langoustine on a bed of Savoy Cabbage and sauced with Butter Foie Gras. Top class. The pasta was gossamer thin and the Langoustine inside cooked perfectly, it has not become a bit of rubber. The Butter Foie Gras sauce was rich and flavourful. A winner!

This led us onto yet another Parmesan creation. Here it was a Parmesan cream with an Artichoke Veloute on top. Warm, creamy and very tasty.


Now the Chef decided to send us yet another freebie. So we got a most exquisite dish. Once again it was Langoustine with a light crispy tempura style batter where the Chef had managed to encase a basil leaf between the batter and the Langoustine. This came with some Pesto. Perfectly fried and a wonderful dish. An example of how food can be fried without getting greasy if the oil is at the correct temperature. 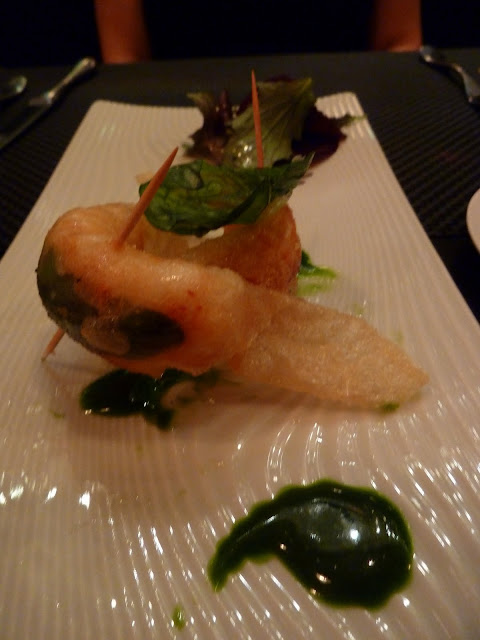 This set the stage for the piece de résistance. Our main course Le Burger. Yes, yet another rendition of a simple burger, but boy oh boy did this one really sing. We got two baby burgers where the bun was a lightly toasted Brioche. Inside was some grilled Red and Green Peppers, Caramelised onion, a beef patty and a piece of pan fried Foie Gras. This was truly historic. Neither Her Majesty nor I have ever eaten such a majestic burger ever. It was juicy, it was tasty and it was great. It was sad the restaurant was done in black; I had to use a flash to photograph the burger. This burger was better than the one served at Daniel Bolouds Bar Boloud. It was simply the best. Having said that, it was so rich, that a full sized burger would probably have clogged our arteries for life!

If that was not enough, the Chef sent us the legendary Mashed Potato to try. Silky, smooth, rich, sexy and like melting ice cream in texture. These were really good mashed potato. You could not possibly drown them in gravy or sauce; they had to be eaten as is.

Our last course was Pigs Trotter on Toast. This was, pork from the trotter removed and chopped fine. The Whole grain mustard added and placed on some toast. The garnish was some Iberico Ham. The dish was a delight and the combination of the Mustard with the Pork was a match made in heaven.

The savoury part of the meal was over. To signal this we were given yet another amuse bouche. This was a Vanilla Panacota with Chestnut puree. Cold and nice 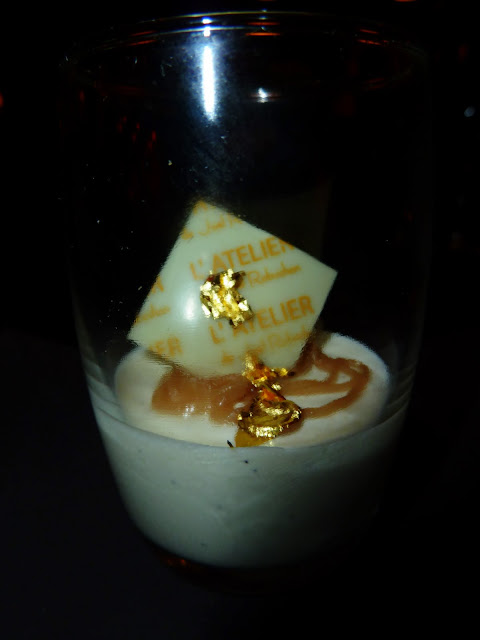 After all that food, I just had to have some pudding. So I chose their speciality Manjari chocolate, white chocolate ice cream and Oreo cookie crumbs. This came in a bowl with a matching lid. The lid was edible chocolate. Just what I needed to round of an amazing gastronomic experience. 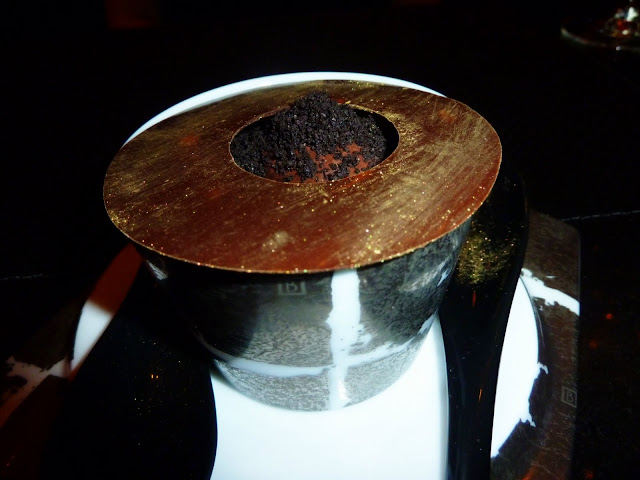 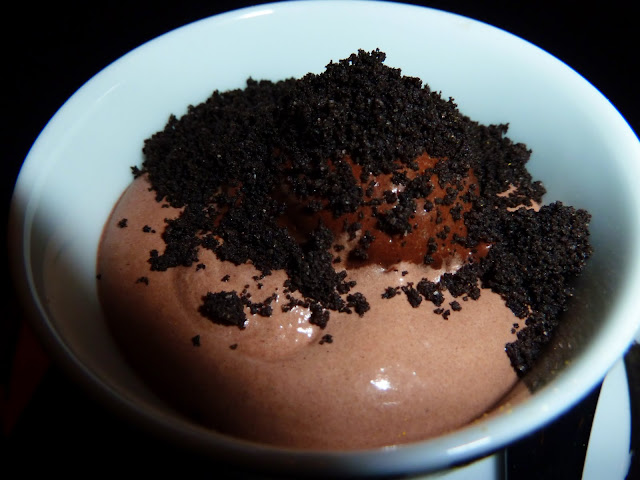 The meal started on an absolute high, faltered a bit in the middle, picked itself up and finished so strong. To have a meal and say that you have had the best two dishes in your life is quite something. For me it was the Burger and the Mashed Potato. A long 45 minute walk back home in the cool London air helped digest all that food.

A restaurant well worth visiting and we will definitely be going back. Besides the food, the atmosphere and theatre of the restaurant was also great fun and resulted in a fabulous evening out.
Posted by Stonethrowers Rants at 9:12 PM