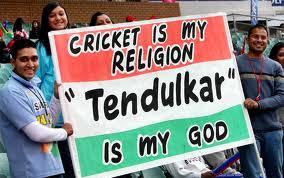 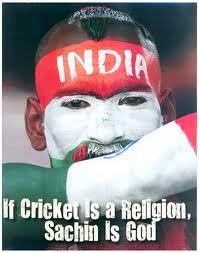 In lawyer-speak, let me state at the outset that this is not about Sachin Tendulkar.
Indians, wherever they may be in the world are absolutely consumed by cricket and religion. I am sure you would have seen the images that I have posted and even the hardest hearted and cynical of you, would have felt a tug, a choke on the back of your throat. For those old enough, we would have recalled watching the World Cup victory in 1983 with our newly minted colour TVs.
The sentiments expressed in the previous paragraph may be subject to some serious challenge for the next few days, what with Kisan Baburao Hazare’s antics, but that will pass. I believe, as the cricketing cliché goes, Hazare is temporary, cricket and religion are forever. Anyway, coming back to the point, all of India is disturbed by the drubbing that the Cricket Team is getting at the hands of our former rulers, the English. We have just lost our ranking as the world’s finest cricket team, and what makes matters worse is that we have lost it to the English. Appalling!
Many Pundits have advanced reasons, provided explanations and even excuses for this terrible state of affairs. Some of these are:
However, in my considered opinion, the Pundits are barking up the wrong tree. All our cricketers are obsessed with religion, or to put it differently they are deeply religious. How many times have you seen a photograph in the morning newspapers with an accompanying write up about a cricketer going to Shirdi, Siddhivinayak, Tirupati to `give thanks’ to the Almighty. Every century scored results is a small quiet solitary moment looking heavenwards. Our cricketers have red strings on their wrists, red tilaks on their foreheads, talismans hanging on their necks. Look at S Sreshant, Kerala’s finest bowler. He looks like a walking Gurvayur Temple. Ishant Sharma has a neck-full of black strings, presumably to ward off evil eyes. Yes, they are religious and why not, God has given them so much to be thankful for.
This, my dear friend is the problem. This is the holy month of `Shravan’. It’s a month where doing `Tapasya’ by fasting results in a lot of benefits. So our cricketers are all fasting. To be a good sportsman a perfect diet is essential. This fast has played havoc with our players. The commentators have been mentioning that the team looks subdued, they feel cold and keep their hands in their pockets, there is no chatter in the feild. I am sure those who watch the telecast would have heard that. Why did you think all that was happening? Eating Sago croquettes [Sabudana Vada] or Sago Kichdi or only fruits with milk and yogurt has resulted in our cricketers’ purity but has certainly affected their ranking. The cricketers catching ability has been affected as their fingers are greasy after walloping those Sabudana Vadas during lunch time.
This, my friends, is the real problem.
The crafty ones reading this will immediately ask, what about Munaf Patel? To them, I can say, pityingly, he is fasting for Ramzan. Yes he, poor chap can’t eat or drink anything during the day. Nada! Why do you think R P Singh was chosen to play despite coming in as a replacement and not having played cricket from January? Because, at least R P Singh can eat those delicious Vadas!!! Mind you Dhoni is not stupid choosing R P Singh. Please credit him with more sense.
Do you need more proof? Did India not comprehensively beat the West Indies, in the West Indies, without the services of Sachin Tendulkar? Yes they did. And pray [no pun intended] when did they do this? Before Shravan!! Now you see what I mean.
By the way Shravan gets over on the 29th of August. So we should do well in the T20 and ODI’s.
Right, now that we have got this established, what is the lesson that the BCCI should learn? Simple answer. Play against England during Lent. That should teach those guys a lesson. No booze and no meat during Lent my friends. That ought to teach those Poms a lesson beating us during our Holy month and crowing about it!!
Posted by Stonethrowers Rants at 4:40 PM