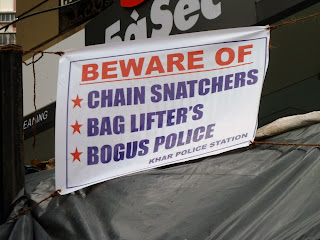 When I was a little boy, I loved being a bogus soldier. In fact I loved being a bogus Field Marshal. I am sure other little boys would have loved being bogus police. Why not? The power, the swagger the commanding voice with which we all spoke. It was great fun. You almost had the power to tell your fellow kindergardner, `no milk at lunchtime for you’ if he was misbehaving. Man was that power!
I have noticed that someone has put up these banners. They appear in different sizes all over Mumbai but generally say the same thing. There is no indication on them that the banners have been put up by any authority, nor is there any indication that the banners have been printed with the approval of the Mumbai Police. Since they have not been torn down by the authorities, one can assume that there is some degree of tacit approval by some powers that be, on the printing as well as putting up of the banners.
I am staggered at the sheer idiocy of the banners. Mind you, the Mumbai Police are the second best in the world. This is a fact affirmed with much chest thumping and collar raising by the incumbent Police Commissioner on every occasion that the Police `cracks’ a major case. If this is not a totally self serving statement, I don’t know what is. But be that as it may, it really makes no difference if the Mumbai Police is the best or second best in the world. The best are the Scotland Yard, which thankfully, even the Mumbai Police concedes.
So, coming back to the point, the Mumbai Police has approved the placing of banners saying `Beware of bogus police’. What exactly are they trying to convey. How are we lay citizens to behave when confronted by the police?  I think the Police Commissioner should immediately issue the citizens instructions on how to determine the difference between real police and bogus police. The Reserve Bank of India has issued instructions, in colour and in multiple languages no less, telling us how to distinguish between real and counterfeit i.e. bogus currency notes. Unless this is done at the soonest, we are bound to have a real pickle on our hands.
Take, for example, the poor traffic cop. He is always found in the shade of a tree some distance away from a traffic island, standing with one hand on his motorcycle looking hungrily at vehicles that would have broken the signal with impunity. He then swoops into action; Of course if he is busy booking another driver, his attention is solely focused on his victim. If I was stopped, I believe it would be necessary for me to ask him if he was genuine or bogus. He would have to prove that he is a real cop before I hand him my `licen’. And in the absence of any instructions or directions, how am I to determine if what he gives me as proof of his genuineness is adequate? I see fines reducing drastically. I see cops having to prove their bona fides becoming of paramount importance.
Continuing with the poor traffic cop, suppose he was in fact directing traffic, am I to obey his hand signals or should I check if he is bogus?
Turning to the normal beat cop, presently found sitting outside Ganapati Pandals, walking alongside Govinda `tolis’, sitting outside theatres showing `Aarakshan’, sitting outside places where we have just had `bum sports’ and generally operating in ultra slow motion, should I ask them if they are bogus? They, poor chaps, are barely conscious or coherent at the best of times, but are they genuine?
Why would anybody want to become a bogus police? To enforce the law. Great. That would serve us all well. The crying need, as so eloquently put by our Home Minister, P Chidambaram, is that we have neglected funding the police force. So if we have bogus police should we not be happy? Unfortunately, this is India. We have bogus police not to enforce the law but to extract a bribe! Is this what the defining image of our police has become? Ruthless bribe-takers who threaten us in order to make money? Yes, indeed that is what it has boiled down to.
And what is the Police force doing about this? Not weeding out corruption, not educating the citizens to not give bribes, not using CC TV to record bribe taking but asking us to beware of bogus police!!
Incredible. Truly incredible.
Posted by Stonethrowers Rants at 2:44 PM