Yes Regensburg, a town in Bavaria, Germany, where the BMW is made, a short 120 kms from Munich.

Why? Because it’s a mediaeval city, a brilliantly preserved one, untouched by the bombing in WWII and a UNESCO World heritage site. Regensburg was home to both a Messerschmitt Bf 109 aircraft factory and an oil refinery, which were bombed by the Allies in 1943. Although both targets were badly damaged, Regensburg itself suffered little damage from the bombing, and the nearly intact medieval city centre survived. Regensburg is one of the most visited sights in Germany.

We like mediaeval cities. If you have been reading and following this post, you will have read that we have been to Aachen, Bergamo, Bruges, Ghent, Prague, Siena, Strasbourg and so on. These are fairy-tale cities, extremely well preserved and totally beautiful.

Regensburg is quite convenient to visit. You fly to Munich and you can take a dedicated shuttle at a cheap or reasonable hassle-free Euro 29 per person from the Munich Airport direct to your hotel in Regensburg in about 90 minutes. You could of course save some money, get a train from Munich Airport to Munich City, from Munich city another train to Regensburg, then a taxi from Regensburg station to your hotel. By the time you have done this and lugged your awesomely heavy bags [as we Desis cannot travel light] you would be in a terrible mood and would have blamed your wife for her penny pinching foolish ways as well as most other problems you have faced in your life, and for good measure, her stupid parents.

Regensburg is on the train route from Munich to Prague. So we had an itinerary. After three nights in Regensburg we would go by train to Prague.

The Alt Stadt or Old Town of Regensburg is where all the tourist action happens. Unless of course you are here to take delivery of your BMW to drive it home. Very popular, is this activity of driving your BMW home. Anyway, our hotel was painstakingly chosen after hours trawling thru websites. It was actually a warren of apartments described in a typically Indian way – An Aparthotel. That is something my mother always said her home was not – A Hotel – “no, you will jolly well eat what is made. This is not a hotel; I cannot make different types of food for everyone in this home”! Someone should tell her about Aparthotels. This was a thoroughly modern place. very well decorated with mod cons you would not dream of in most apartments – Netflix, Sonus music, a contorting bed operated by remote control and so on. However, to my irritation, there was no cleaning and servicing. So for the three nights we slept in our own squalor – so to speak. But this is a good place to stay and brilliantly located – right in the dead centre of town.

Regensburg is extremely pretty and charming. Most of the streets are for pedestrians only, so walking is really a pleasure. The town is compact and getting form one sight to another is a breeze. Of course, without realising it, criss crossing the town you will clock up the miles, you will easily achieve the 10,000 steps a day. We were doing 10 kms + per day that we were there.

What does Regensburg offer? Well you have the obligatory, massive, imposing and beautiful Gothic Cathedral right in the centre. This was being renovated so there was some ugly scaffolding on the spires. But this was indeed imposing. 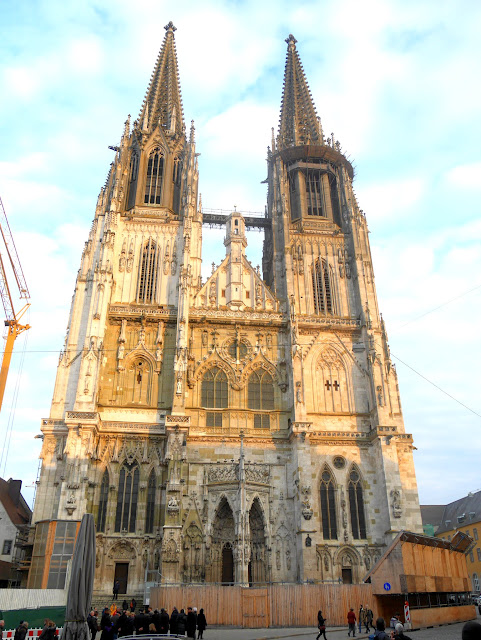 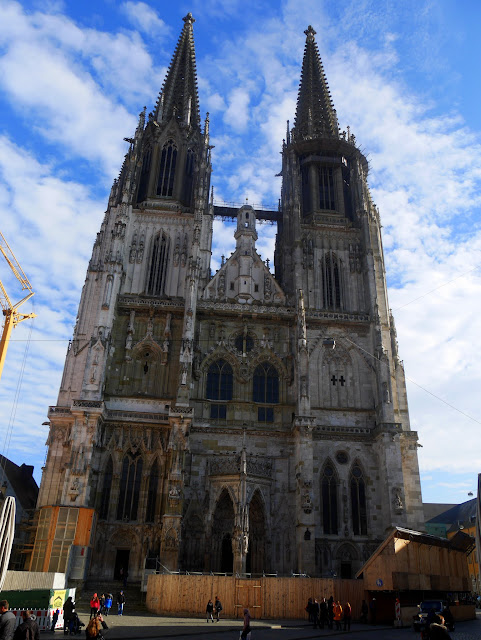 You know the cliche - the Taj Mahal looks different all the time. Well folks, so does everything else once the lighting changes. 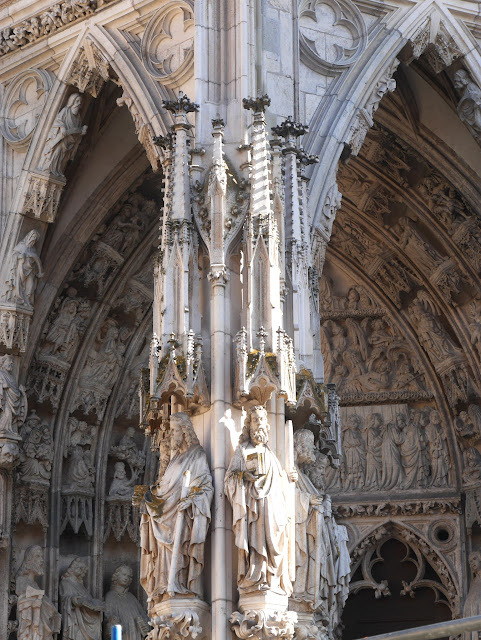 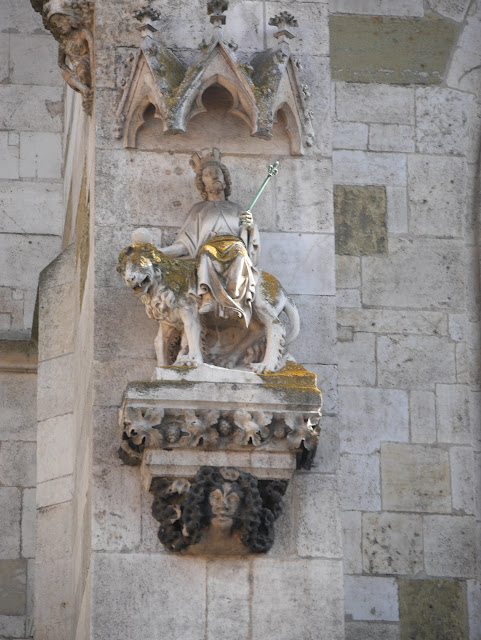 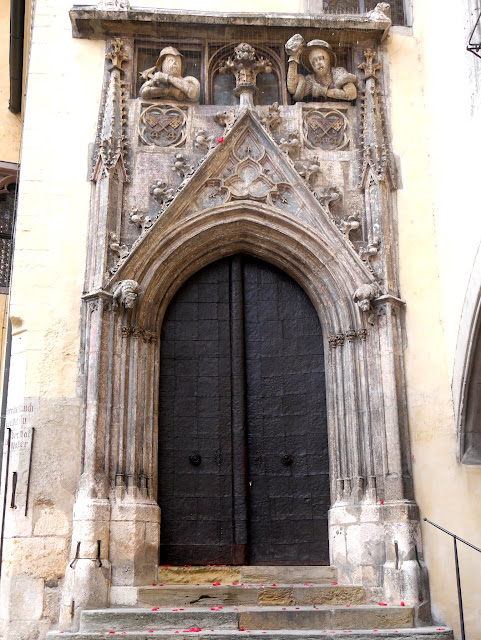 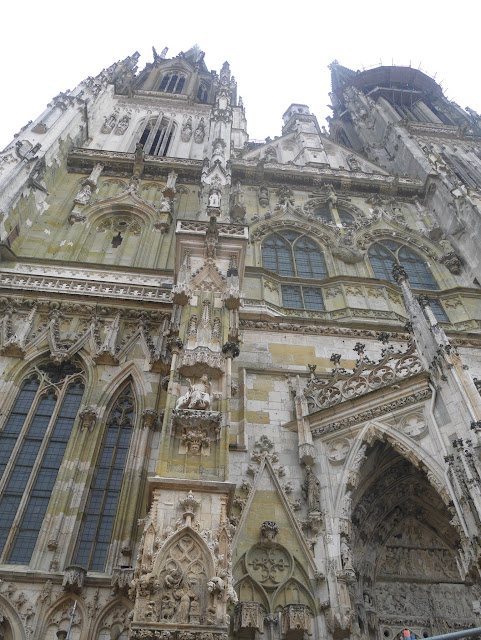 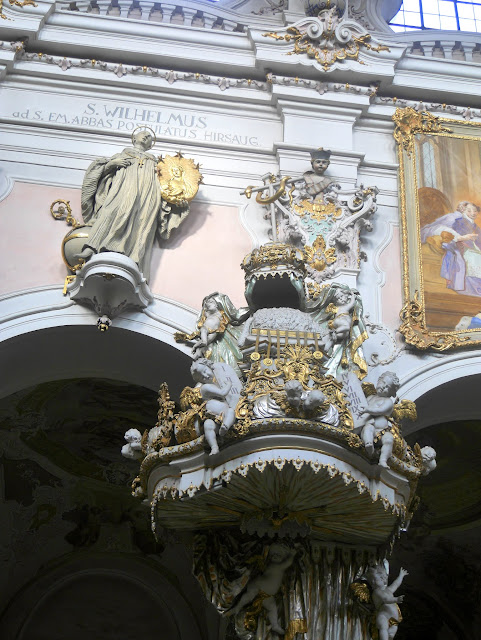 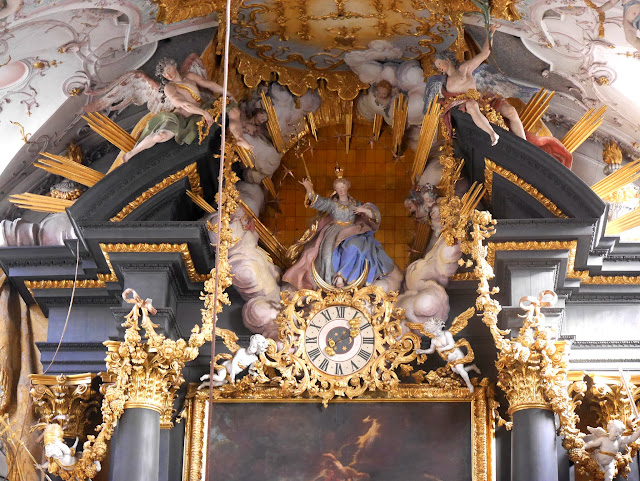 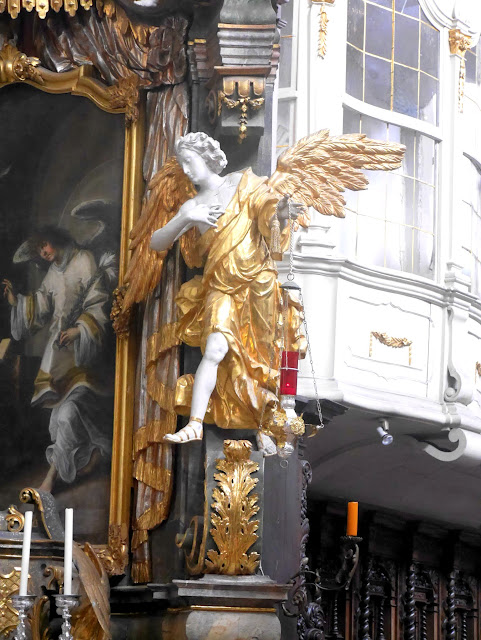 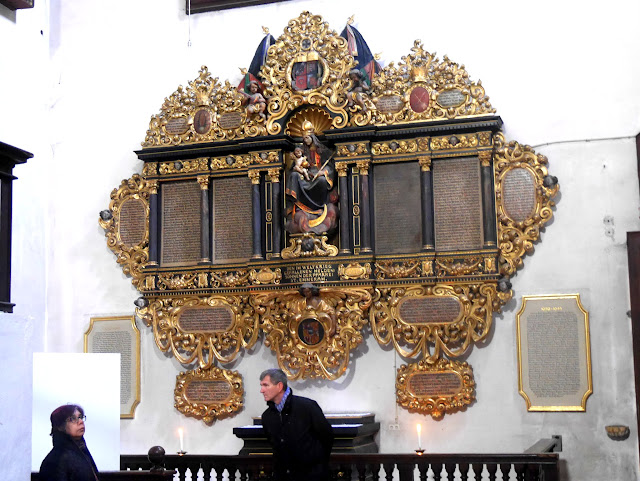 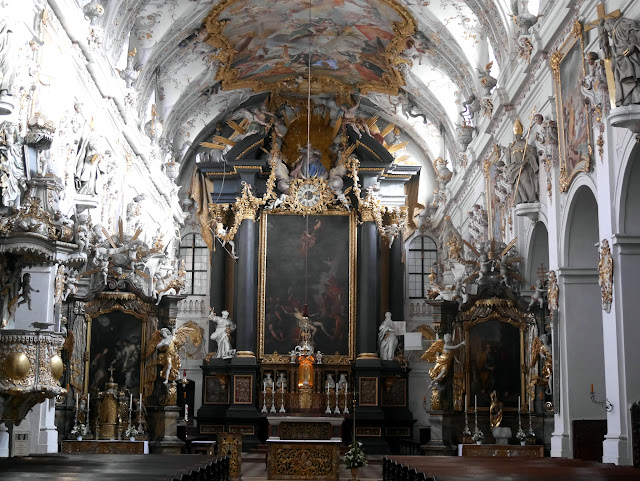 You also have a stone bridge which spans the Danube. Regensburg is located at the confluence of 3 rivers; however, the Danube is what flows along. This stone bridge too was being renovated with ugly scaffolding. We were told that this stone bridge is far older than its brother stone bridge the famous Charles Bridge in Prague. . We did walk across the bridge and the views were lovely. You had island where people were fishing, and like in picture postcards you had ducks wading in the water. I can imagine that in summer this river and the island would be a riot with swimming children, “Biergartens” and so on. This was beautiful enough. 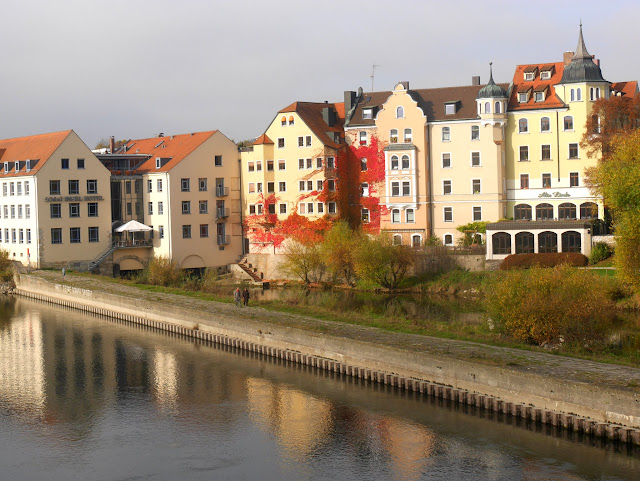 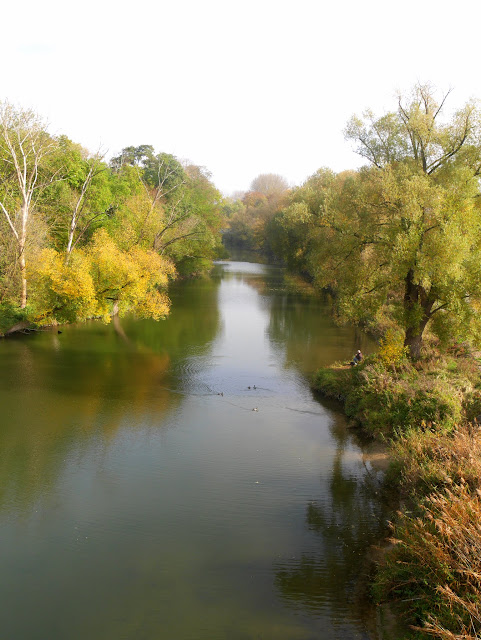 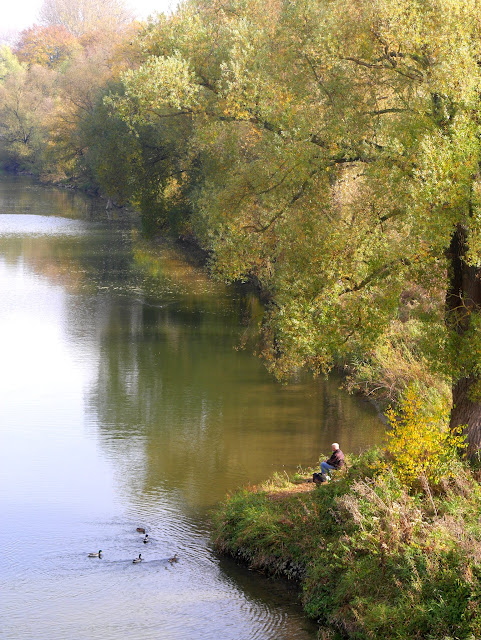 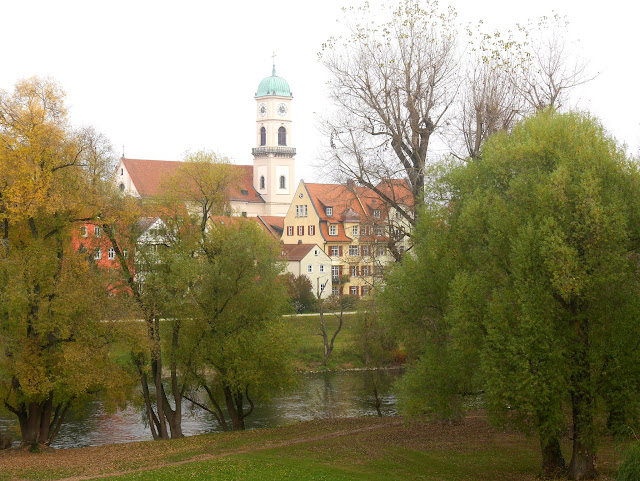 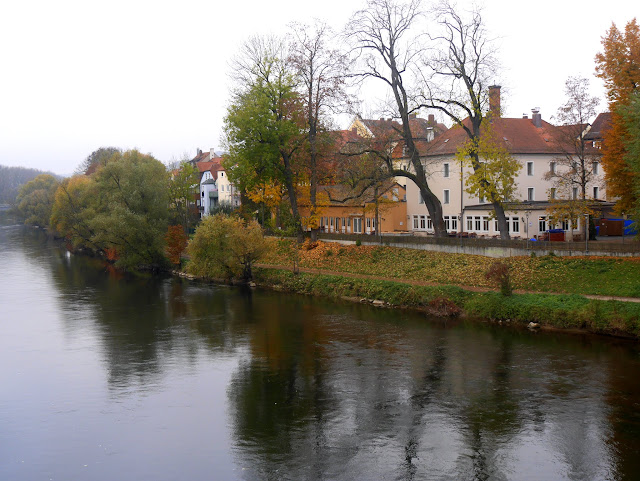 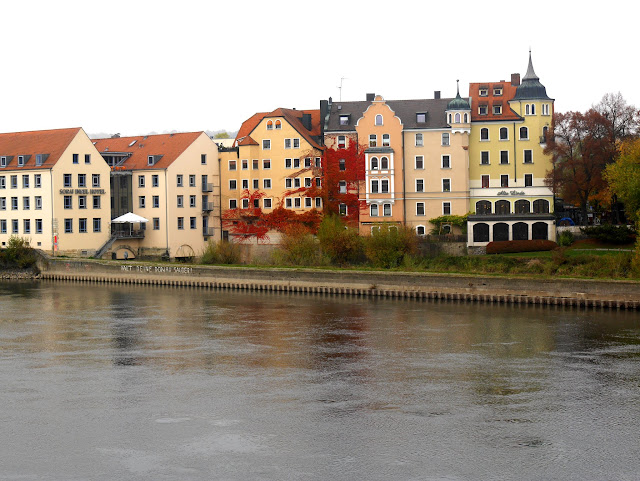 Slightly away from the Cathedral or Dom, is one of the palaces of the Thurn & Taxis family. Very nice, however we did not go into the museum. We have had our fill of museums showing the Royal family or Church’s treasures, carriages or jewels. Not to mention we have paid lots of money over the years at such museums for the pleasure of seeing plundered riches. We are now too old any cynical. Some good quality plundering like the stuff at the Vatican is well worth splurging on, but not these cheap and cheerful plunderers.

So dear readers, have a look at the photos. Consider a visit to Regensburg and do combine it with Munich or Prague. Doing it standalone does not make sense. Regensburg is nice and with decent food and drink, as you shall read in the next post. 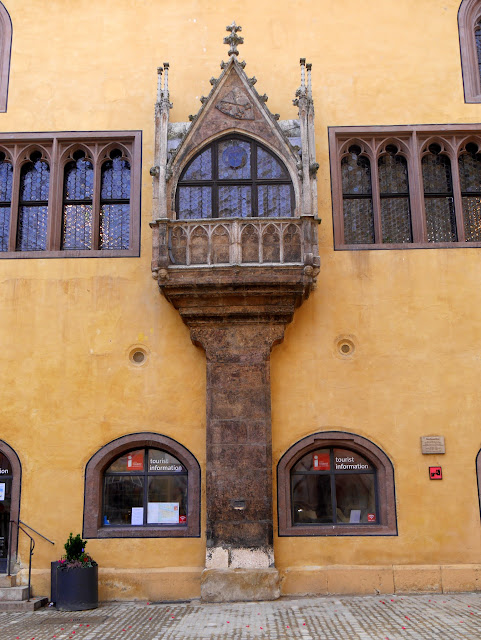 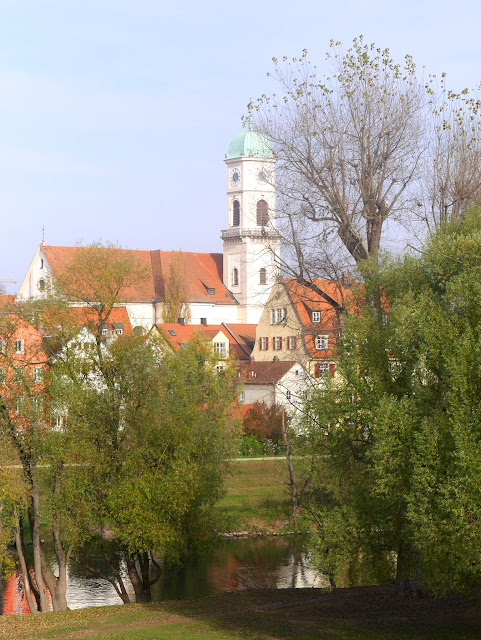 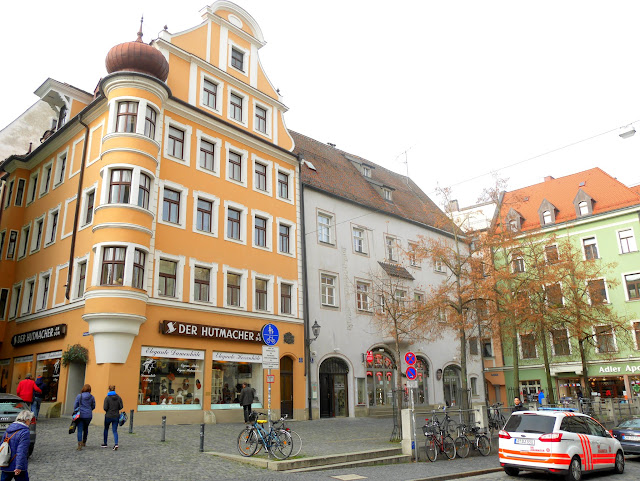 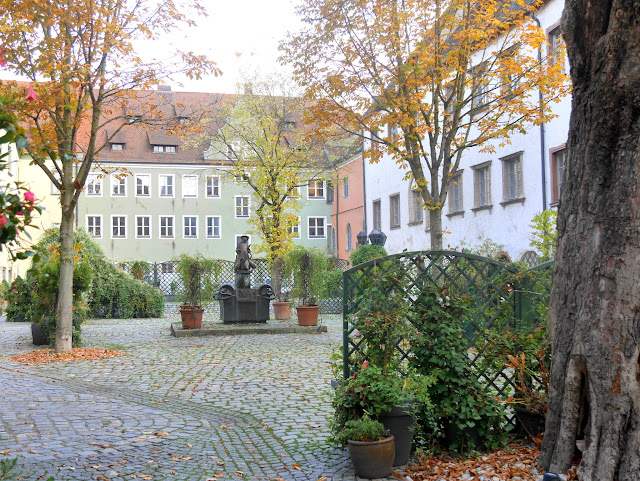 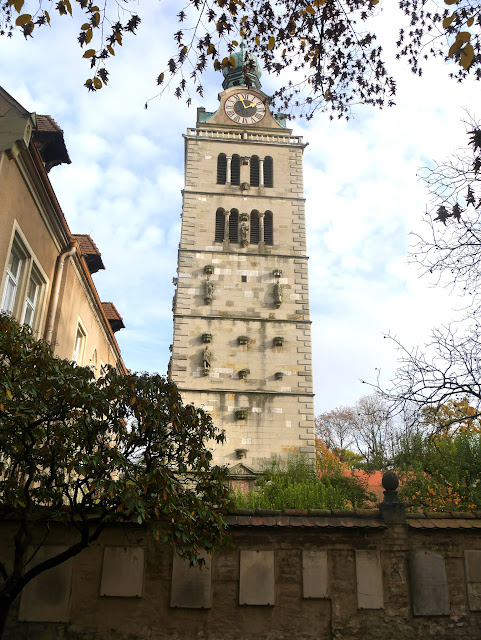 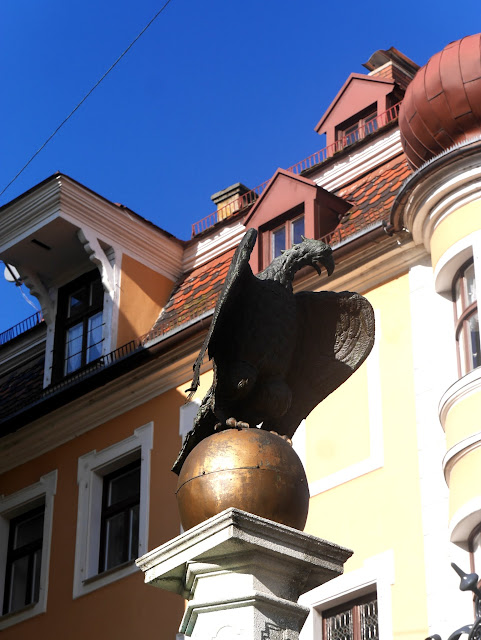 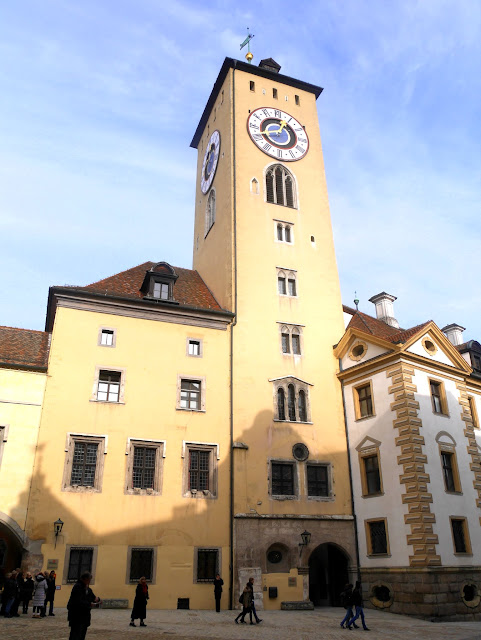 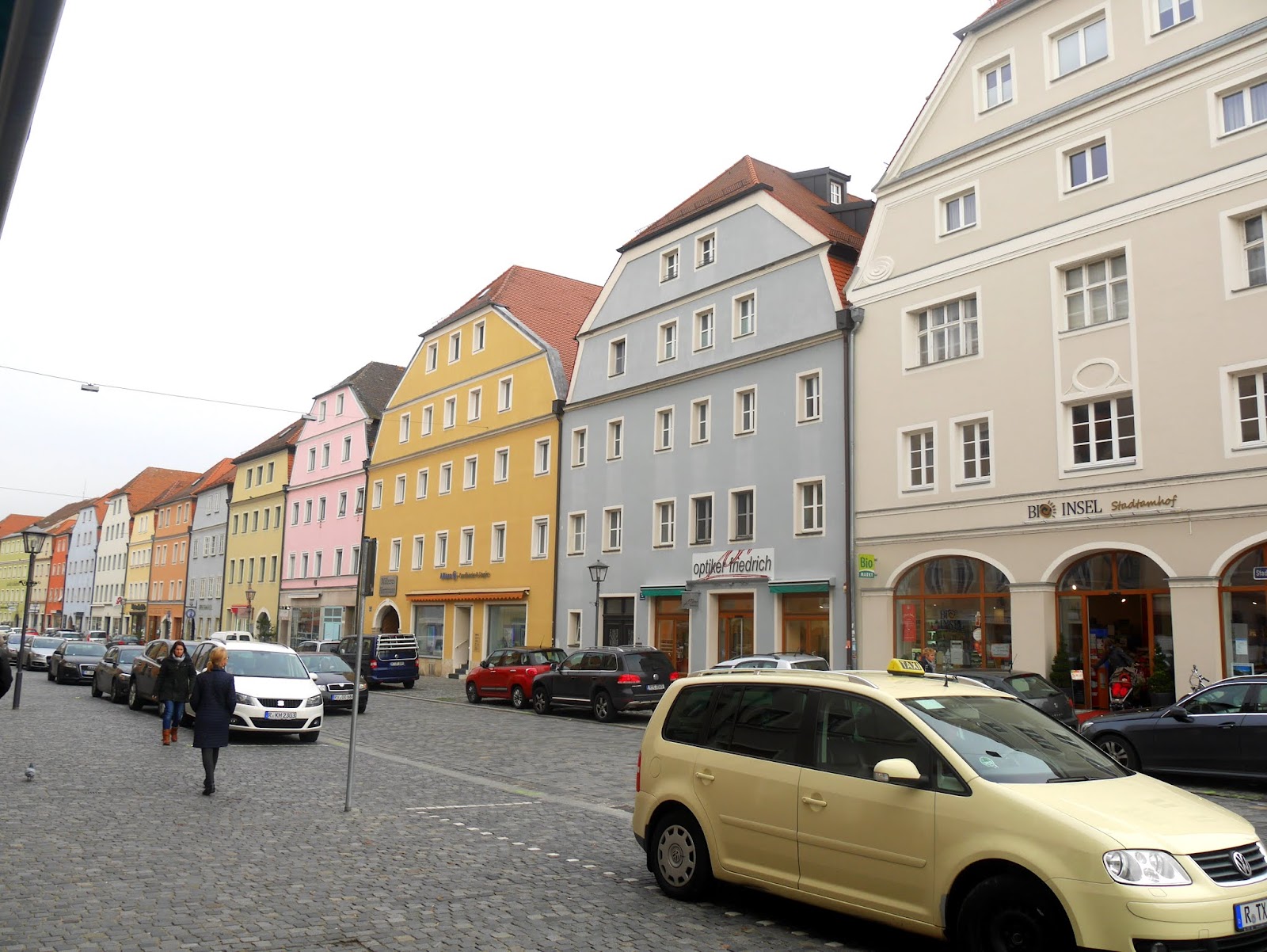 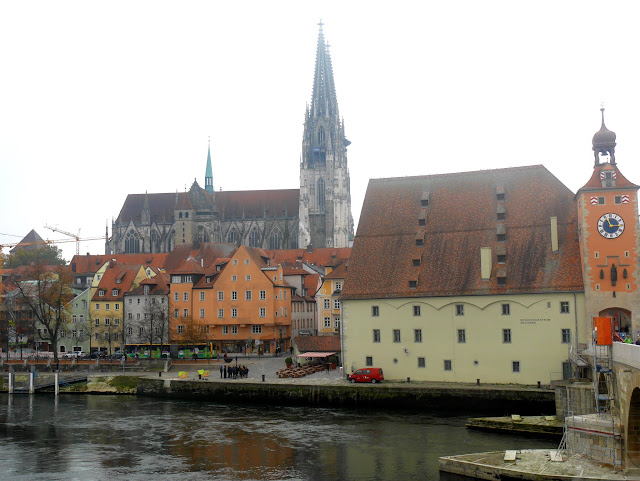 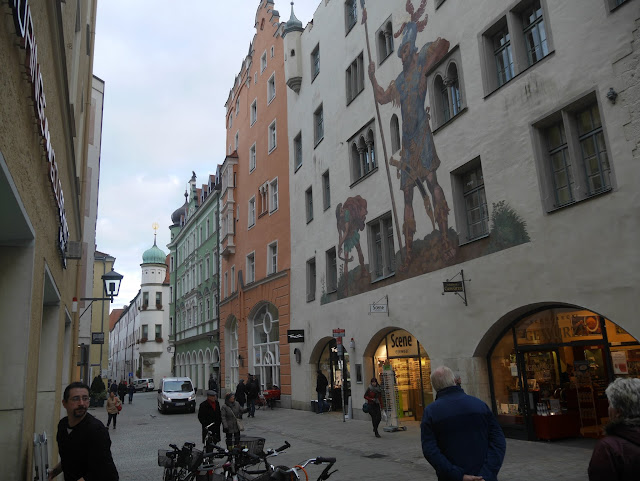 Posted by Stonethrowers Rants at 2:22 PM