A summer in London - Musings by HRH the Queen of Kutch

Dear readers. This is written by HRH the Queen.

Summertime, And the livin' is easy

Surely, it’s a fallacy when people say familiarity breeds contempt. It cannot be so. How often have you gone back to your favourite book and found it can still surprise and delight you. Similarly with your favourite movie. Or that walk down to the vegetable market where an unexpected treasure awaits. Or that sudden insightful comment by your spouse that reminds you why you still delight in her company even after all these years. Sometimes all it takes is looking at the familiar with a new perspective. Sometimes all it takes is a little bit of Sunshine....

Readers of this blog will know that London is by a country mile our most favourite city in the world. We have been there more times in the last 10 odd years than I can count and have always come back loving the city just a little bit more. We try and avoid the busy tourist season from June to September and are most often in London through spring, autumn and a few times even the dead of winter. The cold doesn’t daunt us and we have walked through more London streets than I daresay most Londoners have. This year though, for reasons too silly to get into here, we decided to go to London in the peak of summer. July!

Yes, we would be hitting the peak of the tourist season. Yes, half of Mumbai and almost all of Delhi would be at Selfridges and Marks & Spencer. Yes, we would have to brave the crowds if we walked through Oxford Street. But hey, we had decided we were going and off we went...

We landed in London at 7pm and drove into the city under a bright summer evening sky. After quickly checking in and unpacking just the essentials, we headed out to the local pub for a pint or two before a late dinner. That evening at the pub set the tone for the next ten days in London. It was after 8.30 in the evening, the sun was still out playing peek-a-boo with a struggling moon and the pub was FULL with people. But the people were not In the pub, they were all standing outside. Over a hundred people standing on the pavement outside the pub enjoying the rare summer day. Inside the pub was almost empty with people strolling in just to top up their drinks. What a contrast to the rest of the year when everybody is crowded inside and everybody heads home much earlier. Another thing that struck me was the burst of colour. No greys, blacks or blues. Everyone was in bright summer colours and the atmosphere was celebratory.

A few pints down we strolled off to a famous Italian restaurant a few blocks away and were immediately recommended a bottle of Rose to accompany our food. ‘Perfect for the summer’ our server pronounced!

The next nine days flew by in a happy burst of sunshine. This London was different from the London of Autumn and Spring.

More people smiled more often. People seemed to greet each other more. Everyone wore bright clothes not just in the day, but even in the evenings. The parks were full of sun-worshippers and innumerable games of catch, baseball, cricket and football. Several of the parks had free concerts and games through the day and a carnival like atmosphere seemed to seep through the entire city. The small Grosvenor Square right behind where we were staying had a small stage with some lovely jazz every evening we were there and the rest of the square was transformed by board games, table tennis, snakes and ladders and other such fun activities. People took advantage of the lovely weather and flocked here during their lunch hour or in large groups after work.

Every Sunday in July, Regent Street is closed to traffic. The street becomes a long entertainment hub. Areas for children, music, bars, circus acts, jugglers and all sorts of performing artists. We went for a `dekkho'. Great fun. Wonderful atmosphere. 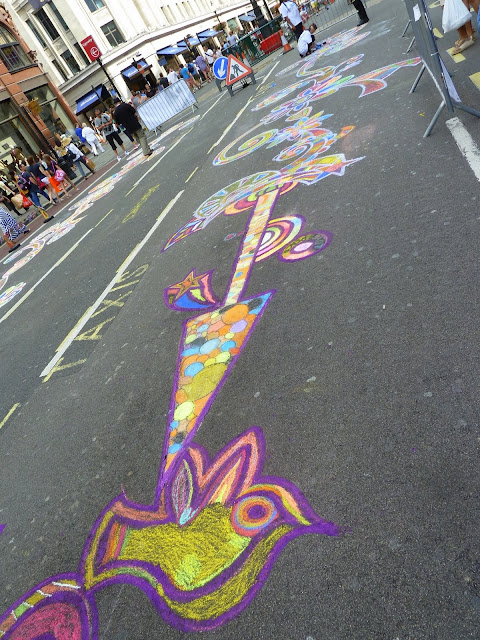 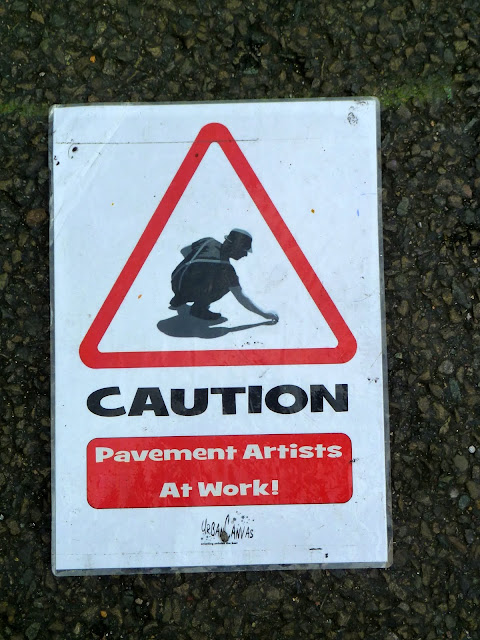 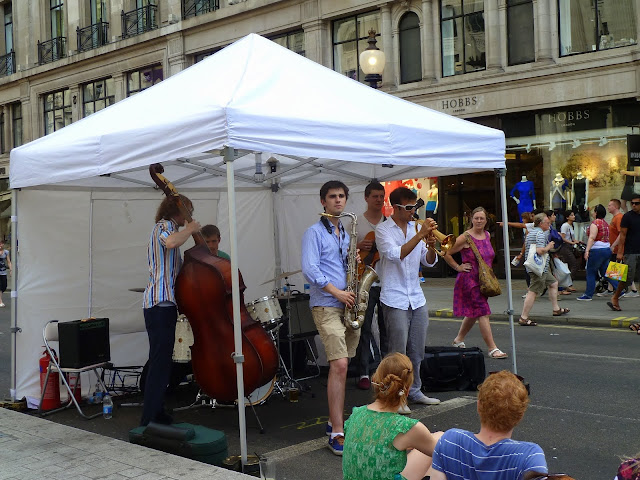 For the first time in London I didn’t need an umbrella, a sweater or a jacket at all. Frock and sandal weather for 10 days in London is a fairly big deal, even the Londoners agreed.

As the temperatures hit 30 degrees C, panic swept the nation. As it crept up to 31 and then 32, health alerts were flashed across the country and people were warned to stay hydrated and not venture out in the streets between 11am and 3pm. This was the warmest long sunny spell in over 8 years. Coming from a land where 32 degrees is a mildly pleasant day this paranoia amused me a bit at first till I realised most homes and offices were not built to cope with the heat. They had no cooling systems, not even fans, and more often than not, no cross ventilation! Large parts of old London are built to retain the heat through the long and damp winter and are just not equipped to handle extreme heat.

All department stores had fans for sale as soon as you entered the store. A burst of breeze from table fans of all nature and ilk blasted in our face at the entrance of all stores and many people were buying them for their homes and offices. A white good they would use for the next few days and then store away for heaven knows how many years.

Besides the fans, every shop and store had HUGE summer sales on and the best of designer dresses and shoes were available for a bargain (if such a word can be used when you look at the rupee-pound conversion rate!) But again, the shop windows were awash with bright, happy summer colours. 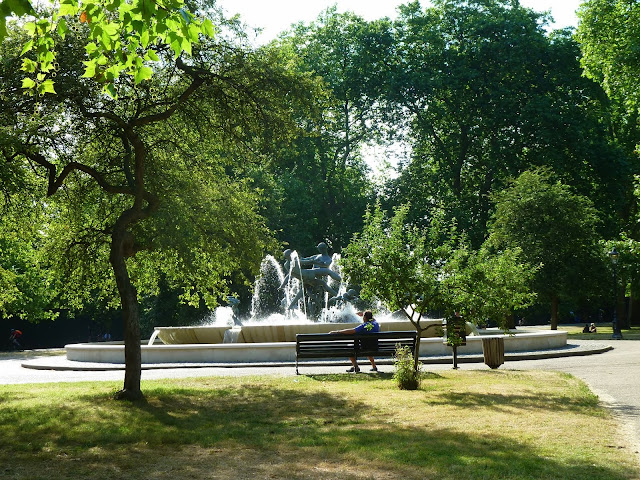 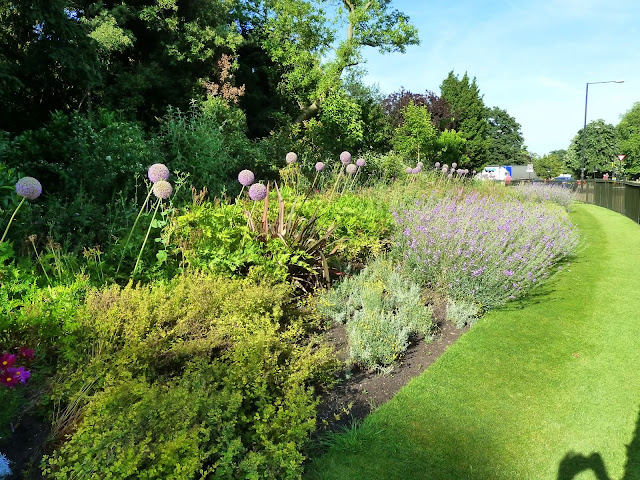 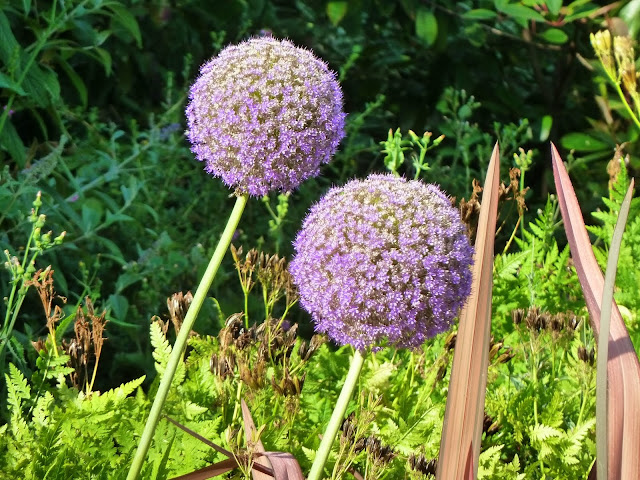 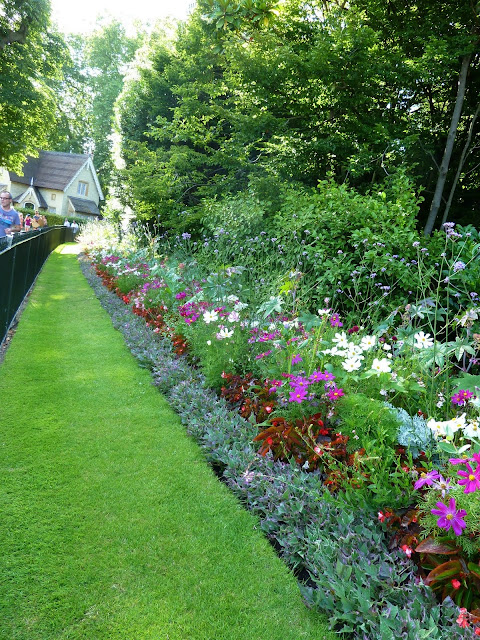 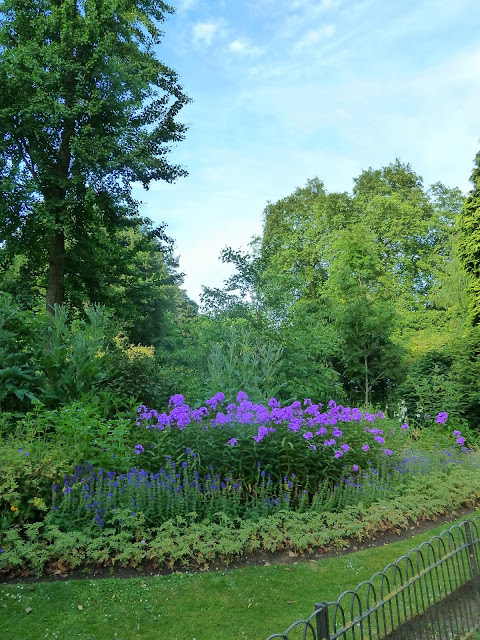 The flowers were in bloom all over London and a walk through the parks was a delight. We decided to go for a 1.5 hour walk in Hyde Park every evening and it was such a pleasure. Each day we chose a different route and discovered new parts of the park we had never come across in all these years. The park was full of people. Picnic baskets like I have only seen in movies or on display at Fortnum & Mason were out in full force as were sun-bathers slathering on the sun tan lotion, kids running amok on bikes, bare-chested teenagers on skateboards and boom-boxes blaring out the latest rap song. The Serpentine was awash with people feeding the ducks, lying around on loungers, crowding the restaurants for a pitcher of Pimms or paddling along in the tiny rental boats. This was the summer you see in the movies or read about in books.

We were to go for the Rolling stones concert at Hyde Park and as from our rooms right across the road from Hyde Park, we could hear sound checks and distant strains from all the other concerts. On the day of the concert the gates opened at noon and many people made it ‘a day at the park’ as it were, with picnic blankets, many many pints of beer, suntan lotion and a few ball games. By the time The Stones came on at 8.30, there were many sunburns and many people had been in the park for over 7 hours.

I guess these 10 days of summer were such a pleasure for me was because living in Mumbai I have never really experienced seasons and the effect a bright summer’s day can have on the clothes, atmosphere, food and behaviour of people.
Posted by Stonethrowers Rants at 6:19 PM