A dear friend [such an Indian phrase] who lived at Pali Hill and now lives in Delhi, was in town. She wanted to visit her old haunt, the very popular Toto’s Garage Pub before going on to dinner. We had planned to go to the brand new restaurant Arsalan at Khar for dinner. It promised to be a good evening.

On to Toto’s where we proceeded to have our favourite intoxicants. The friend reminisced about Chicken in Wire Mesh, a Toto’s classic, so we summoned the ever enthusiastic Raj and asked him to get us a Chicken in Wire Mesh. Soon it appeared, it is essentially straw potato deep fried in the shape of a bowl and filled with a Chinese style chicken. Quite delicious and quickly wolfed down.
On to Arsalan which means lion in Urdu. Arsalan is a Muslim Bengali restaurant from Kolkata. They have some 4 outlets in Kolkata and have opened their first outlet in a spanking new building on S V Road, Khar at the crossroad leading to Khar Station. Muslim Bengali food is quite different from both Bengali food as well as Muslim food. It does not have the classic Doi Maach, Poshtos, Macher Jhol and Chingri Malai dishes that Hindu Bengali food has. By the same token dishes like the Mutton Chaamp, Rezala are peculiar to Muslim Bengali food. The Mutton Rolls that we like are also Muslim Bengali.

Arsalan has a modern decor with a few tables indoors in an air-conditioned section while several more are located in an open air area, obviously encroached up and therefore illegal. Since it is `winter’ in Mumbai the outside area was pleasant to sit in so we took a table there. We did not foresee the noise from the heavy traffic outside, but it was pleasant all the same. The restaurant was full of Bengalis speaking in Bengali, insulated from the `cold’ by their jackets, hoods, sweatshirts, shawls and what have you. Come on guys, it’s not that cold in Mumbai!
We started with Double Mutton Single Egg rolls. The `roti’ in the roll was a `Laccha Paratha’ – so we were informed by our waiter. Not normal but nice. There was Tamarind chutney inside. Good rolls but, unfortunately, they arrived lukewarm. It seems the Parathas were made earlier, the meat cooked earlier and simply assembled on order. Pity, but good nonetheless. 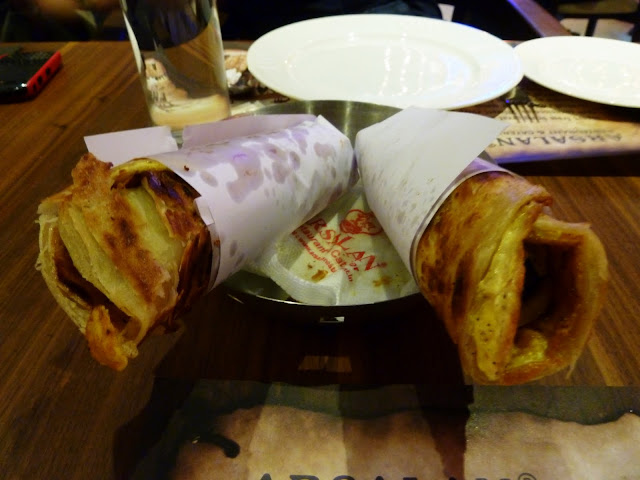 Our waiter suggested that we have Special Arsalan Chicken Kebab. This was skewered boneless chicken cooked in a Tandoor and covered with a thick coating of melted Cheese. Interesting, tasty and slightly different.
For our main course we ordered a Mutton Dum Biryani Special [Special has one more piece of Mutton, one more piece of Potato and a boiled egg as opposed to ordinary] a Mutton Chaamp and Mutton Rezala. The waiter insisted we get a Tandoori roti. The star of the evening should have been the Biryani. A Kolkata biryani is unique. It has very bland rice but it’s very aromatic, redolent with Kewda [Screwpine] and Elaichi, and the meat is rather bland too. Unfortunately once again the dish was lukewarm. It was tasty, the rice well cooked and separate the meat luscious the potato soft but all of it was cold. The Rezala was, to my mind, a mess. It was had a very thin milky gravy which really had no parentage. Disappointing. The Mutton Chaamp was once again ice cold but it suffered from a bigger problem, it had a lot of shattered bone in it. This was unpleasant as well as dangerous as it can really bugger up your teeth. The texture [barring the bones] was peculiar, it was greasy and grainy. Not nice.

In balance, the Rolls, Kebab and Biryani were good. It would have been really good if they were served hot.  The place is new and prices are low. In fact the prices are very low. For the three of us with all the food I have written about the bill came to just Rs. 1070 which is just Rs 350 per head. The quality of the meat used is really very good.  Go for a meal. Hope you get hot food, if you do, you are really in luck.
Arsalan the lion did not roar, it meowed and whimpered!!!
Posted by Stonethrowers Rants at 12:05 AM