The Food in Croatia & Slovenia

The food in Croatia was consistently good. We all ate well, and before you ask, no we did not eat at a single Indian restaurant. All meals were Croatian, no pizzas, no burgers or KFC.

I believe that Croatia is pretty unique in as much as its food is concerned. What is on offer is fairly diverse. Croatian food has been influenced by many factors. As I have written in the previous post, Croatia has a long coastline. Hence, they are blessed with fish, plenty of it. The proximity to Italy has influenced the food in as much as pasta as well as Risotto is regarded as local food. Being a Catholic country, pigs are reared, pork is eaten and you have some good charcuterie. Truffles grow locally, of course not of the same quality as the Truffles from Alba, but good nonetheless. There is plenty of local cheese, a lot of the cheese being made with sheep milk. For some reason, we all found that potato was of very high quality and the Croats know how to cook it. Breakfast had some excellent sautéed potato, with our meals we got really good roast potato. We ate a lot of Swiss Chard [this is a lot like Spinach].

Wines were plentiful, of all types, price points and drinkability. Beer was good, and served cold. I drank plenty of good locally brewed draft beer. We all drank excellent wines, always expertly chosen by Le Grand Fromage Tax Lawyer. Maraschino is a liqueur that originated in Zadar. The Luxardo family, which still owns the business, has the largest Cherry orchard in Europe. Maraschino is a clear, slightly sweet liqueur with approximately 30% alcohol. Pleasant to drink. Please do not get all sentimental and buy a bottle to get back home. I assure you that the bottle will lie at the back of your bar, lonely and forgotten, only to be pulled out by you when you are half drunk with 5 guests at home desperately trying to down a few more nightcaps. You will of course blame the hangover on that shot of Maraschino, not the copious amount of other stuff you had drunk thru the evening!

Croatia has a largely Mediterranean climate. Italy is close by as is Greece. Olive Oil is big in Croatia. The cute boutique shops all sell Olive Oil, in cute bottles. Supermarkets have loads of Olive Oil. Restaurants took pride in placing sometimes 3 bottles of Olive Oil on the table for you to dip your bread. At times the restaurants were so proud of the oils they served that they also placed a little tent on the table with a description of the provenance of the oil and its tasting notes. Most restaurants charged between 15 and 20 Kuna [the Croatian Currency. 1 Kuna is about Rs 10 or .15 USD] per head for bread and oil. We happily paid it. This cover charge is similar to “Coperto” that you are charged in Italy.

We often started with a platter of Charcuterie and Cheese. Both were of good quality and easily held their own against their more famous Italian Salami and French Saucisson. At the farmers market in Ljubljana we bought some wonderful smoked dried Sausage redolent with Paprika. We have been enjoying slices of this at Cocktail hour at home as well as putting slices in a toasted Cheese Sandwich and in a Frittata.

We all ate a lot of fish. I have not eaten as much fish in a few days as I did in Croatia. The fish was always cooked simply and well. Quite often it was a single large Sea Bass baked in Salt, brought to the table, the salt casing removed, the skin coming off with the salt and then the fish expertly filleted. Then you poured on the glorious Olive Oil, a dash of Lemon and the humble Sea Bass was transformed. Swiss Chard and some Potato of accompany. Healthy tasty and light. Also, what we often ordered was a Sea Food Platter where you were served Prawns grilled, often Octopus also Grilled, possibly Scallops and some fish.

Pasta with Lobster or Prawns was excellent as was Pasta with Truffle and local Mushrooms. A Croatian speciality was Squid Ink Risotto, top class with the briny slightly fishy Squid ink providing flavour and, of course, colour to the Risotto.

The cuisine was simple on the whole. There were no elaborate sauces, no foams and molecular gastronomy. The food was simply cooked using top notch ingredients, much like Italian food. There was a lot of pride when the fish was displayed to us. Portions were generous and the food relatively cheap. Do remember that we were eating fish, probably the most expensive protein.

One outstanding dessert, come to think of it, there were times we ate it for breakfast, was the Bled Cream Cake. It is a Slovenian Classic. Simple in concept with humble standard ingredients, delicious to eat and, difficult to make. The Bled Cream Cake had its origins in the confectionary making at the time of the Austro Hungarian Empire. You will remember that this region was under the rule of the Austro Hungarians for a long time.

The Park Hotel along Lake Bled has the original Cream Cake. In 1953 a pastry chef named Istvan Lukacevic modified the original cream cake recipe by adjusting the proportions and adding whipped cream. This cake was a roaring success, and today it is even more popular. We went to the Café at the Park Hotel and all tables had at least one Bled Cream Cake being eaten. Everyone in Bled orders their cake from here. The Cake is simplicity itself. It comprises of 4 layers. At the bottom is puff pastry, then comes a layer of pale yellow Vanilla Custard. The third layer is white whipped cream which is topped by a layer of puff pastry. The top is dusted with sugar. The Cream Cake is cut and served as a perfect square or more correctly a cube.


The number 7 is of great significance for the Cake. For those of you who know how when you make puff pastry you have what are known as “folds”. In this case the puff pastry has 7 folds. The Vanilla Custard is cooked for 7 minutes. The Bled Cream Cake is exactly 7 x7 x 7 cms in dimensions. How the cake is sliced without the whole thing exploding, is a mystery to me.

The Bled Cream Cake is a perfect pastry. It has texture, top notch construction and is not very sweet. We all ate a lot of this. Make sure you do when you visit Lake Bled. 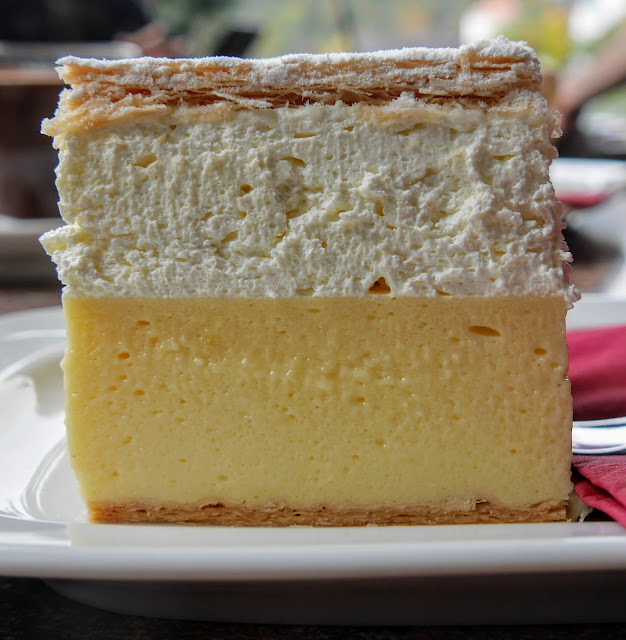 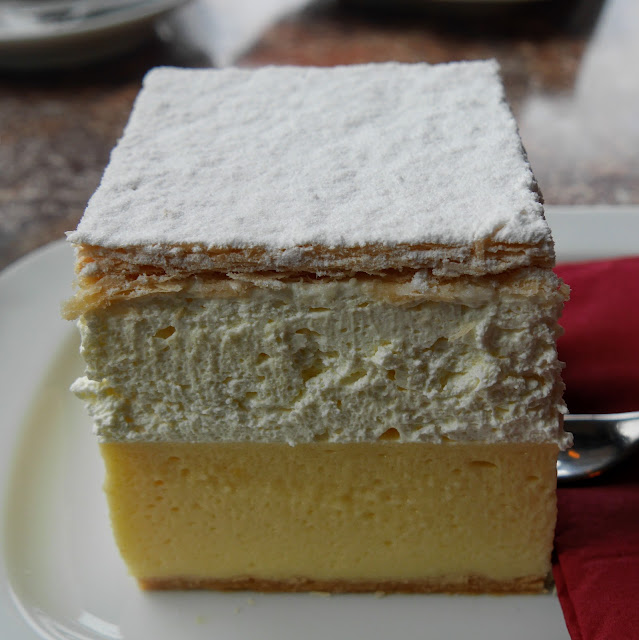 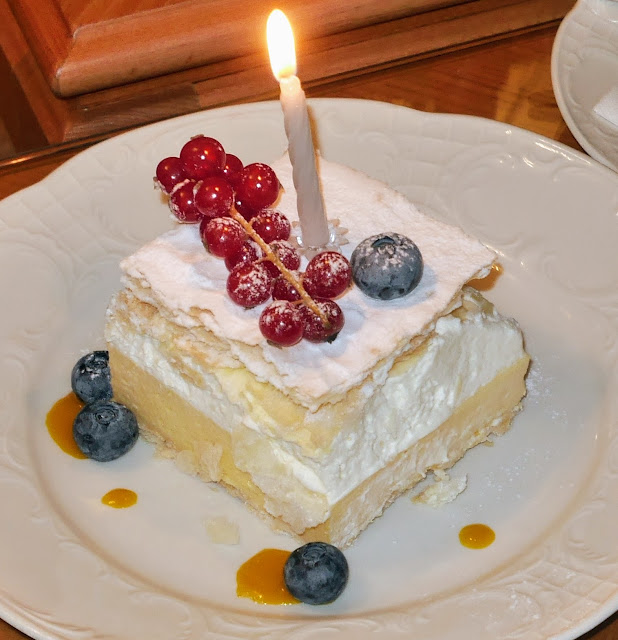 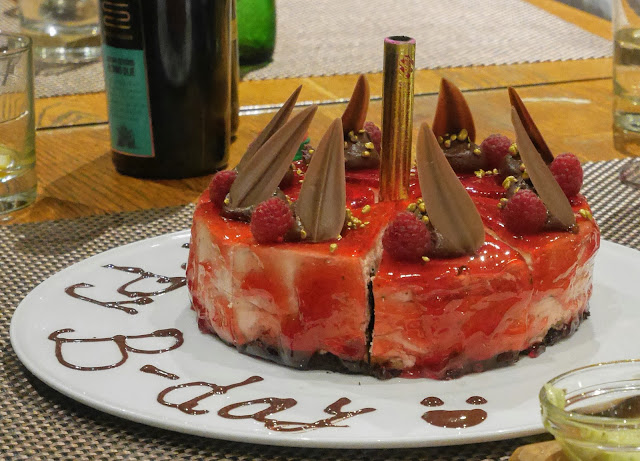 Meal times were serious affairs. To use a phrase that originally appeared in Shakespeare’s Twelfth Night and was later modified by Joseph Heller in the immortal Catch 22, “some of us had duties we were born with, some took on duties and others had duties thrust on them.” Le Grande Fromage Tax Lawyer was born with a good tongue, he is a lawyer after all. So, he was in charge of ordering wine every evening. The Banker was naturally put in charge of maintaining accounts and took on the added responsibility of diligently ordering one bottle of Still water and one bottle of Sparkling water every mealtime. Jumbo was our deal maker, a natural at the job. HRH the Queen of Kutch was given the task of restaurant identifying. The rest of us either did nothing or caused disruptions, played the fool and generally added to the merriment. Actually, I correct myself. Mealtimes were great fun while being serious.

The restaurants we ate at were:

The ones I have marked with a star were exceptional. Except the Pension Milno which was basically a cheap and cheerful pub, the rest of the places were at the top end of what was on offer in each city. We did not visit any of the restaurants that had stars in Michelin as then we would be entering French territory which we had no intention of doing, and also, none of us really wanted to dress up for dinner. The only exception was Restaurant Jezersek where are of us made a special effort for a special dinner.

Here are some photos over which you can drool. 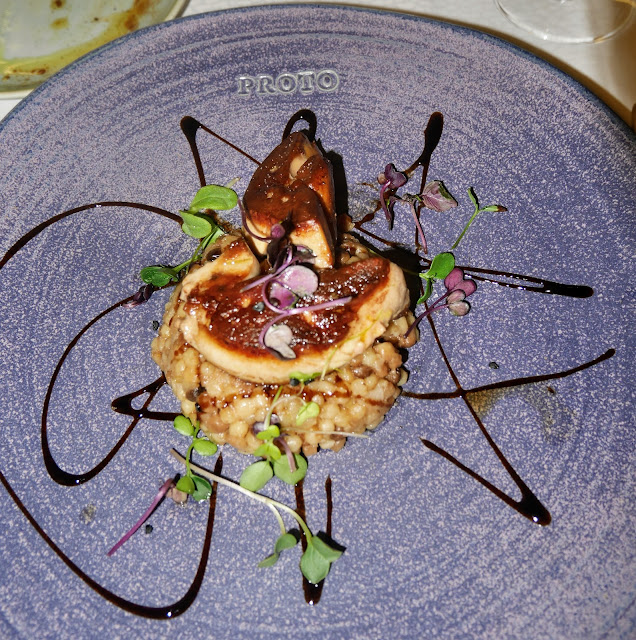 Above: Foie Gras at Proto Dubrovnik 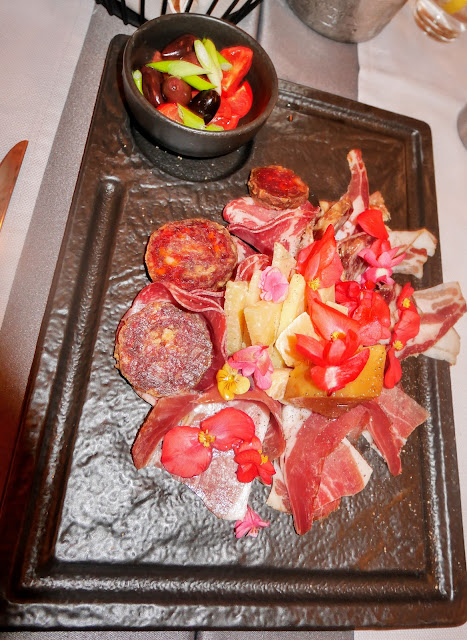 Above: Charcuterie and Cheese Platter at Konoba Dalmatino Dubrovnik 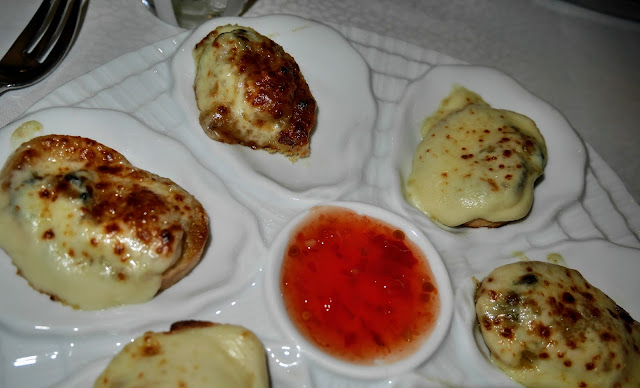 Above: Baked Oyeters at Proto Dubrovnik 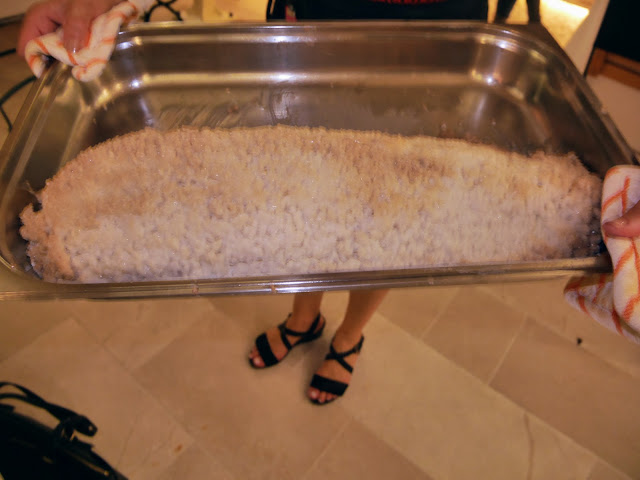 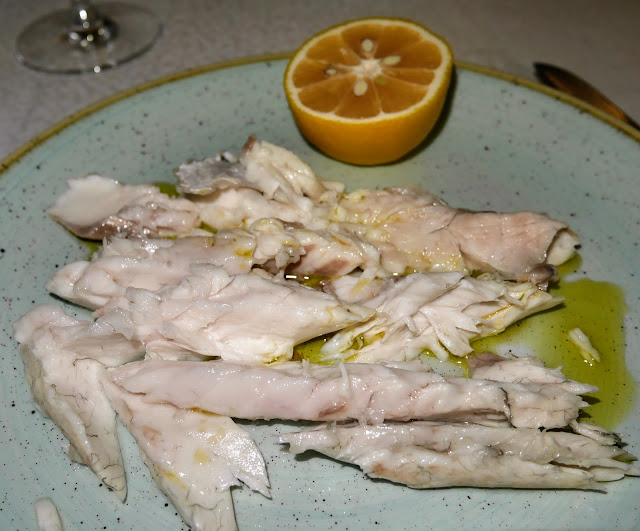 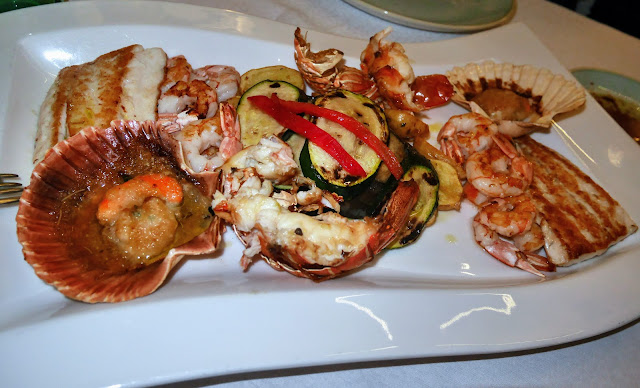 Above: Seafood platter at Porto Dubrovnik 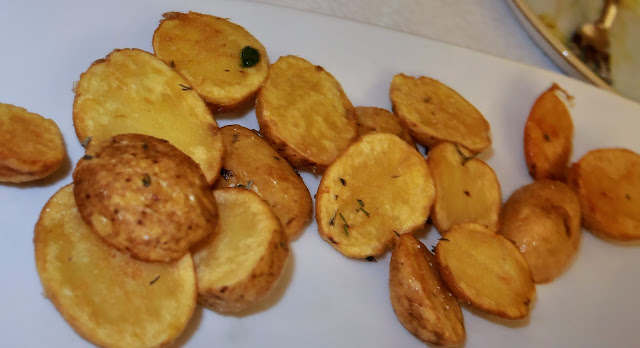 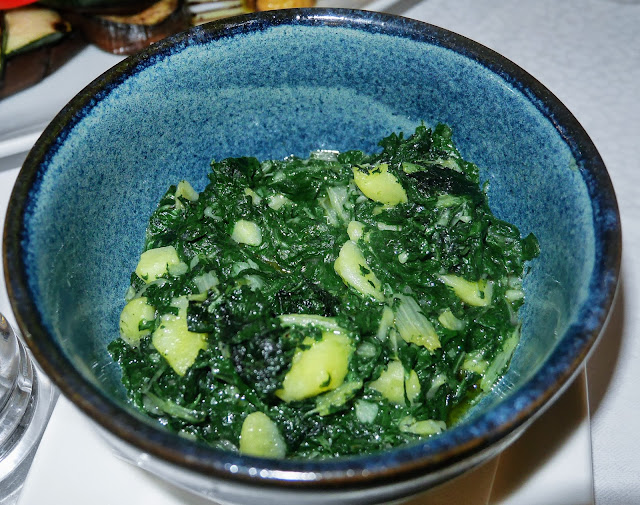 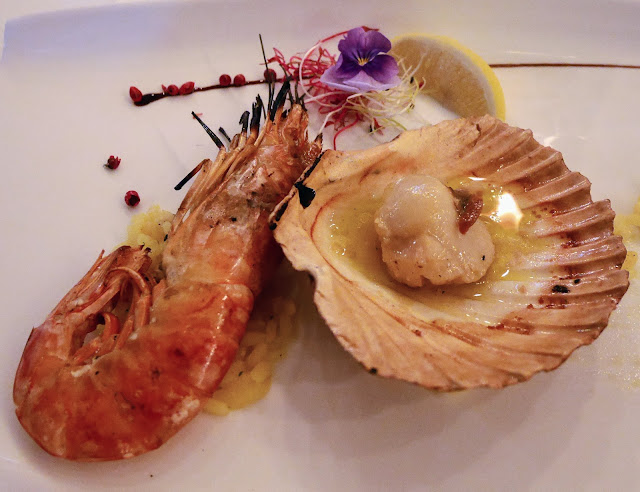 Above: Prawn and Scollop starter at Posat Dubrovnik

Above: Grilled fish and seafood platter at Orsan Dubrovnik

Above: Vegetables to accompany the grilled fish and seafood platter at Orsan Dubrovnik 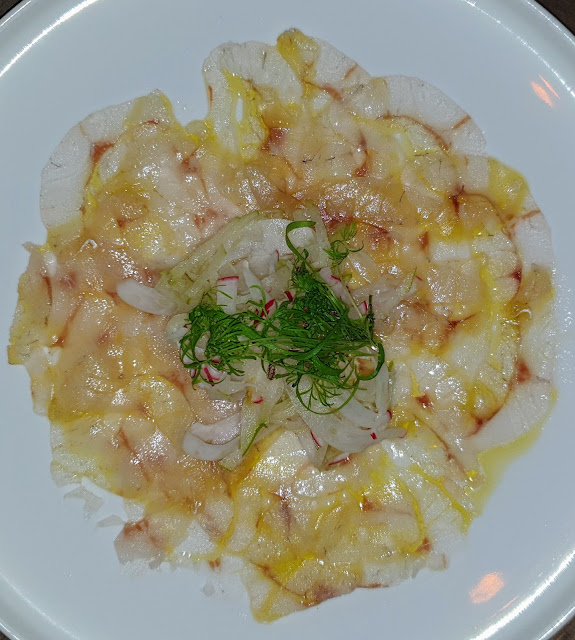 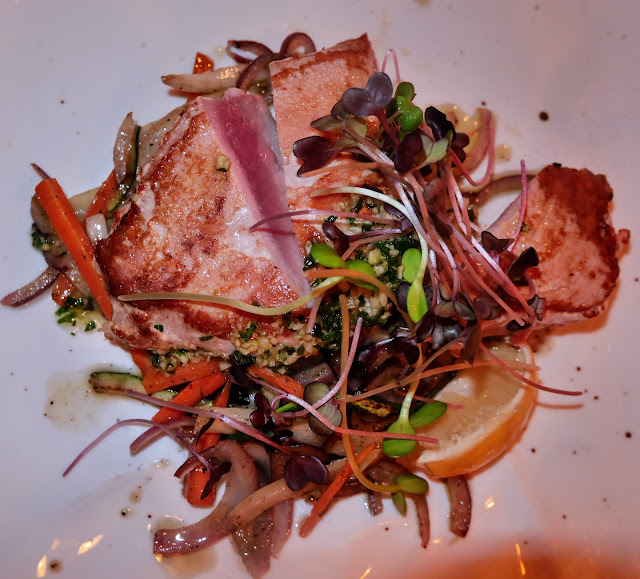 Above: Grilled Tuna at Dalmatino 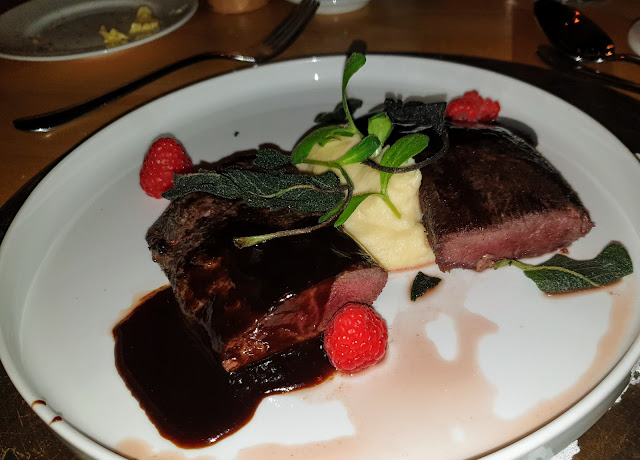 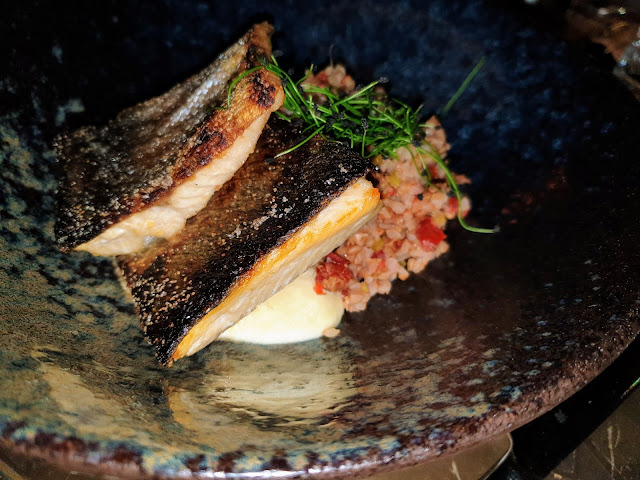 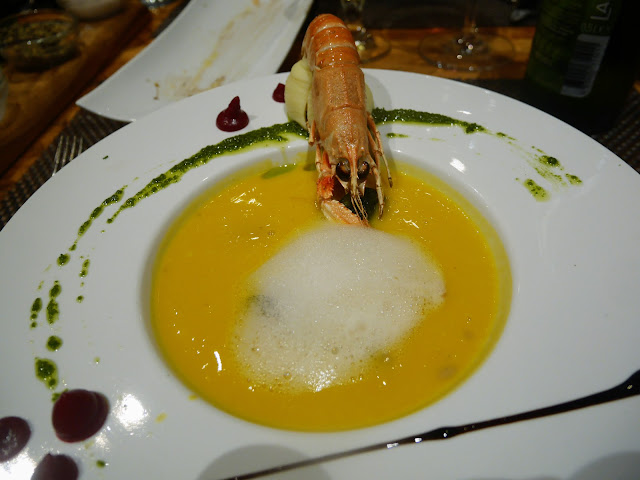 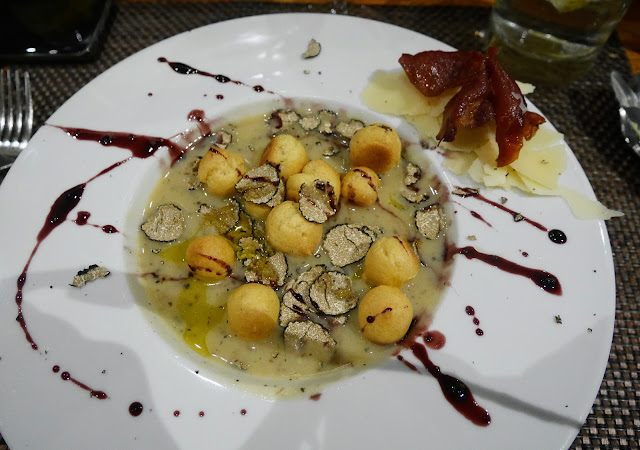 Above: Mushroom Soup with Chestnuts & Profiterole at Sova Lake Bled 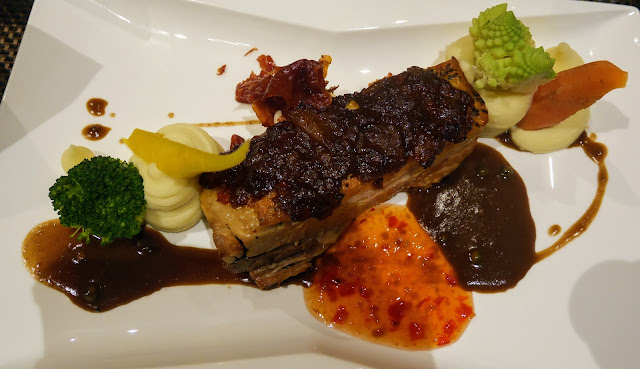 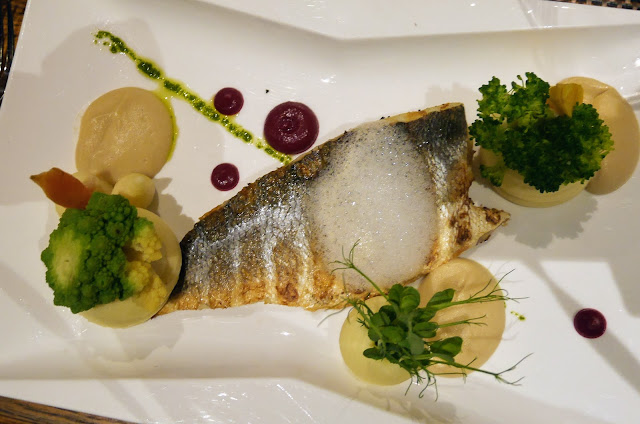 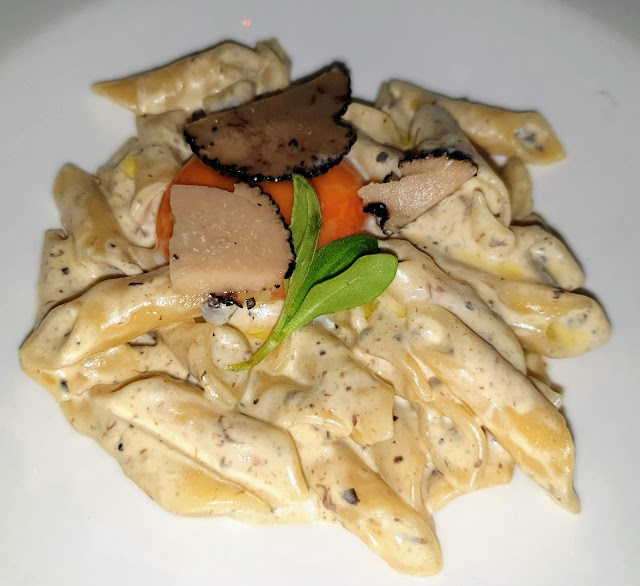 Above: Traditional Istrian Pasta in Cream Sauce with Truffles 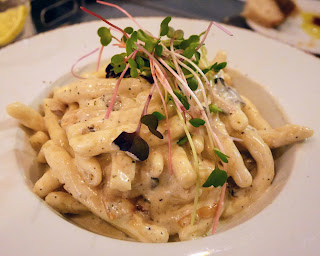 Above: Pasta at Konoba Dalmatino Dubrovnik

Posted by Stonethrowers Rants at 3:29 PM