Eating out in the past few weeks has been fairly disappointing. Readers will have read about how I believe standards have fallen at O Pedro. After that we had a sub-par meal at the newly opened Copper Chimney at Bandra. This has opened where it once was, a sort of reincarnation, on the start of the road leading to Bandra Station. The gravies were unbalanced, the meat tough, and, overall a let-down.

The experience we had at the newly opened La Loca Maria took the biscuit as far as I was concerned. It was the first time, in any restaurant, anywhere in the world, when we have returned both dishes we ordered, obviously uneaten, and, walked out without paying. It was that bad.

Of course, this was punctuated by an absolutely knockout meal at Ling’s Pavilion with some really excellent Clams Chili Garlic. Clams being very much in season now. 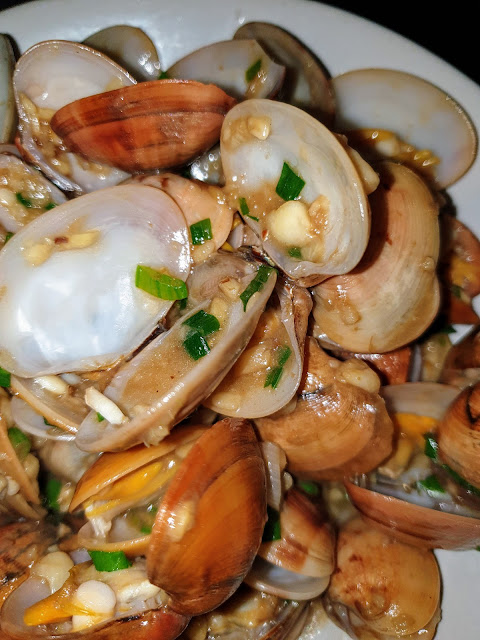 La Loca Maria has opened on Turner Road in place of the long-standing Birdy’s, in the same building that has Sahiban, Café Coffee Day et al. Sometime in mid-April when walking along the footpath, HRH the Queen of Kutch saw some renovation at the site and a good looking white man standing outside. Curiosity piqued she asked white man what was happening. He replied that he was a chef and the owner of a Spanish restaurant that was to open in the first week of May. A new Spanish restaurant literally 50 meters from home. Much excitement.

Well, May came and went, so did June and July. Then in early August, we saw that the doors were open. A call was made and the answer was, nope not yet open, waiting for the liquor license which was expected shortly. Then the PR mini blitz started. A Spanish Chef married to a Maharashtrian girl was opening this place. He had worked at a series of 5-star properties in the Middle East and was part of the now long-shuttered Sergi Arola restaurant at the JW Marriot at Juhu. HRH the queen of Kutch was busy researching reviews. The excitement was reaching fever pitch, as the cliché goes.

So, on 14th August, the day before the Independence Day dry day we wet our whistles at Irish House and walked across to La Loca Maria for our 8.45 pm reserved table.

As we entered, we saw the Chef glad-handing a table near the entrance. To put things in perspective, the site was a cake shop, hence small. It had now morphed into a restaurant. Broadly a third of the area is an open kitchen, another third is the seating and the final third is an illegal encroachment onto the open-air building compound. About 16 to 18 seats inside and probably 6 to 8 in the open, outside. How such a small restaurant can make economic sense I am mystified. On a Wednesday, a day before a holiday, at 9 pm the place was 50% full, or empty. Not a good sign. Obviously, still no liquor license. 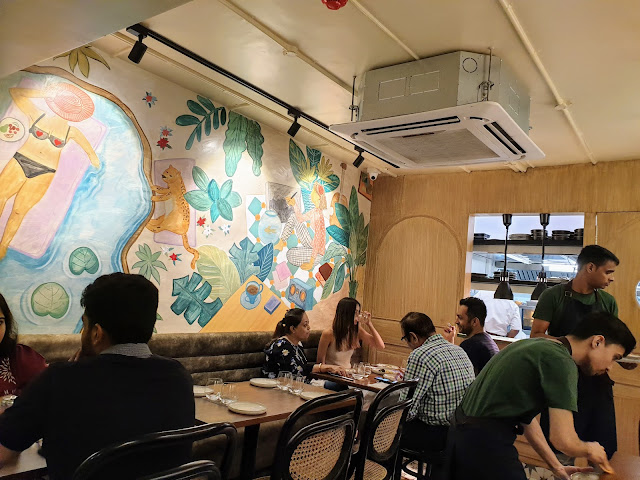 The menu was handed out, two sheets, one with the food and a second with desserts. We decided, thankfully in retrospect, to order just 3 starters, gauge, and then order the main course. As an aside, the burgers were touted in the PR pieces as being excellent, so I told HRH the Queen of Kutch to keep an eye open to see how they looked in case they were being served to another table. As we waited for our food, a half-eaten burger was returned. OK, let’s give the benefit of doubt. Maybe, the diner was full and could not finish the burger.

We ordered 3 starters, all bog-standard classic traditional Spanish staples. Croquettes or Croquetas in Spanish, Prawns in Olive Oil with Garlic and Chilli or Gambas al Ajillo, and Charred Octopus.

First up the Mushroom and Truffle Croquettes with Garlic Aioli. Have a look at the photo. Primary rule in food, everything should be the same size. Rule is broken. You may say I am nit-picking. Really? Go to a pastry shop with different sized chocolate pastry and tell me which ones will sell first, the larger or the smaller? Fine, to use a chestnut, size does not matter, technique does. Here is where we had a huge problem. A Croquette is most often made with a very heavy thick Bechamel or white sauce which is flavoured with Chicken or Ham or Cheese etc. Thus, when you deep fry the Croquette, the Bechamel becomes creamy and delicious. It is honestly a delicious dish. What was served to us had minimal Bechamel, if at all, and was filled with breadcrumb. This, unfortunately, resulted in an extremely dry interior with an unpleasant mouthfeel and overpowering Truffle Oil flavour. Dish returned with 4 of the 6 Croquettes uneaten.

Next up was the Gambas al Ajillo. This dish a joy to eat. Dead simple. A terracotta cooking vessel called a Cazuela de Barro is heated with a generous amount of Olive Oil, sliced garlic and Chilli added along with Prawns. Finally, White Wine is added, sometimes some Paprika and the prawns are served in the Cazuela de Barro spitting, hissing and boiling hot. In La Loca Maria this was a tragedy. We got the prawns, lukewarm, overcooked in a stone-cold ceramic dish. To me, it seemed that a whole lot of prawns were cooked in advance, like prawn curry, in a large Dekchi, and simply plated. Two prawns eaten; dish returned. 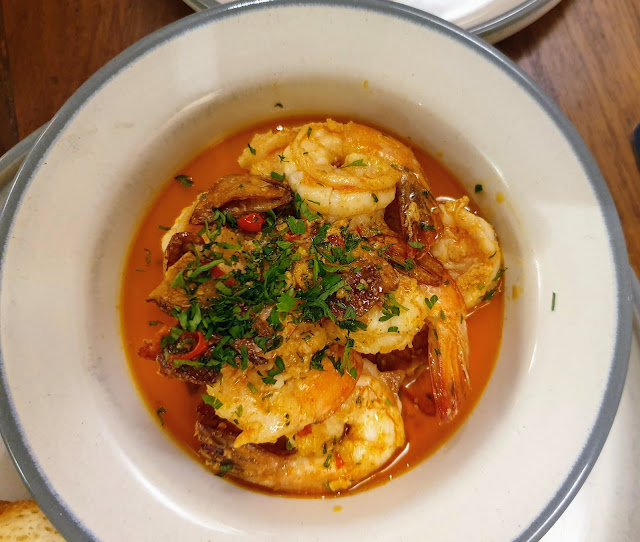 Above: The Gambas al Ajillo at La Loca Maria The order of Charred Octopus cancelled and the bill requested. Chef comes out looking harassed. I tell him this is unacceptable. The Gambas were stone cold, as was the dish which I repeatedly touched with my fingers to demonstrate the cold dish. He shrugged and melted away. The server said we hardly ate anything so why do we need the bill. I was so upset that I agreed with him and fetched my umbrella and walked out.

Dinner was leftover Goa Choriz Pulao washed down with an icy G&T.

I am totally at a loss as to how or why we got such terrible food. As I have written earlier, this was bog-standard Spanish food. Spanish food is codified, that is, it has rules and recipes that are fairly consistent across the board. It is not like our Hyderabadi, Luckhnowi, Bohri, Mopla, Avadhi and Calcutta biryani conundrum. Both Croquettes or Croquetas and Prawns in Olive Oil with Garlic and Chilli or Gambas al Ajillo are standard dishes which any Spanish chef should be able to cook with his eyes closed, half drunk. Is there any explanation? Is he simply a terrible cook? I find that difficult to believe. Has he been driven mad by us Indians who refuse to accept food for what it is and want it spicy or Chatpata or somehow bastardised? Or is it that this place targets Millennials, food bloggers, jurnos and PR types who are clueless at the best of times? If that is the case, the man has no pride. Why not serve good authentic food to those who are clueless? They anyway have no idea. Why compromise?

I predict that he will soon have a new menu, with the attendant hoopla. Thereafter, in the next 9 months, he will be gone.

Sad, But, honestly, he is solely to blame.


Posted by Stonethrowers Rants at 4:18 PM