The Pearl Assurance building at High Holborn is a stunning building. It was constructed, in phases starting in 1912 and was completed in 1960. It was the headquarters of Pearl Assurance who sold the building to the Marriott Group who established the Renaissance Chancery Court Hotel. I have stayed here on work a few times as my US based clients loved the place. They preferred to meet in London, rather than flying to India. Suited me fine. Marriott gave up the property in 2011 and the hotel was run privately for a year. Then it was taken over by the US based Rosewood Hotel Group and after a massive renovation, it reopened as the Rosewood Hotel.

The massive banking hall of Pearl Assurance on the ground floor of the building was converted into a massive Brasserie style dining room seating up to 180 diners. This space, now known as the Holborn Dining Room, serving very British food in a very French looking room. This is manly British food, think, hearty meat pies, fish, grills and the classic English desserts like Sticky Toffee Pudding.

The Holborn Dining Room has been receiving rave reviews. The Head Chef is Calum Franklin who has had a solid career prior to handling the stoves here. What he has devised is truly remarkable. Franklin and his pastry section have some serious talent.

The dining room is beautiful. It was very full on a Tuesday night. Marble flooring simple wooden tables with no table mats. These photos are not taken by me. 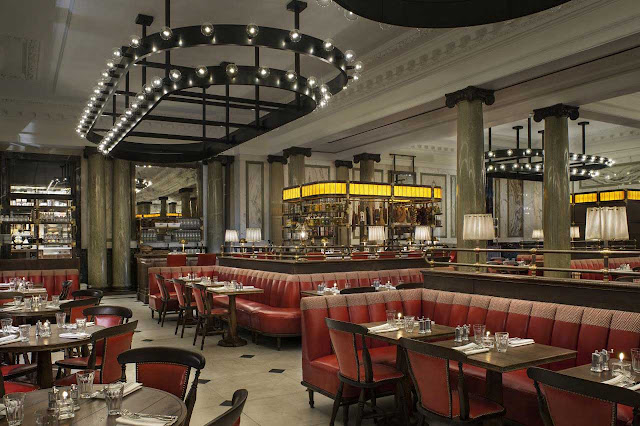 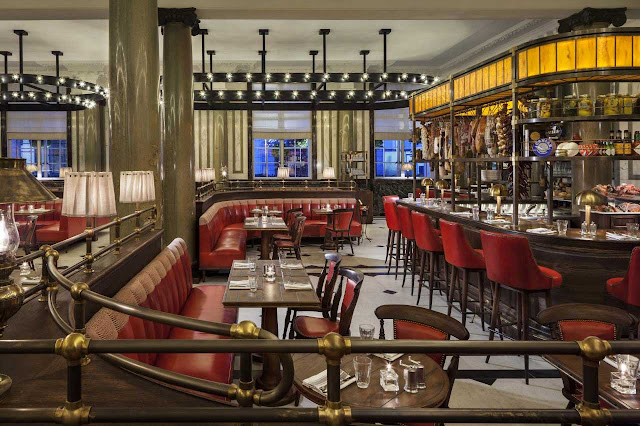 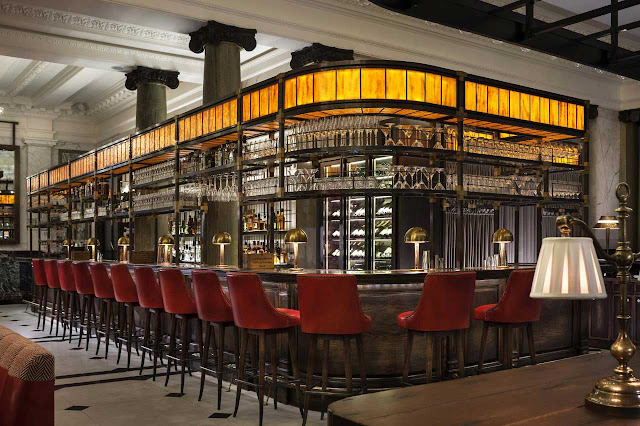 Menus were handed out and we pored over them. The Bar menu had a large selection of Gins and Tonics, so we decided to order one each. The photograph is of a Gin & Tonic called Persie Herby & Aromatic which is garnished with fragrant herbs like Bay, Rosemary and Basil. Looked much better than it tasted. Frankly it was as we say in Marathi “Panchat” or watery, needed more Gin. We decided to switch to wine. Bottled drinks are always the best – wine, beer get me? No need to mess about with mixing and diluting things. Drink it as it was intended. 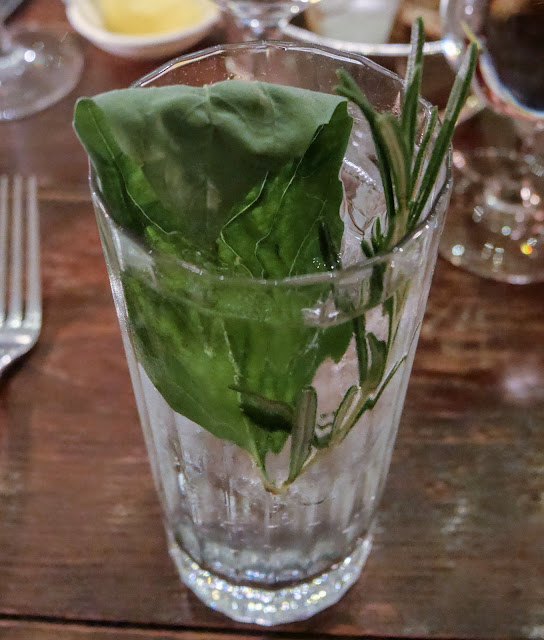 Drinks done, two starters ordered. First up HRH the Queen of Kutch ordered the Duck Pork & Pistachio En Croute with Plum Chutney. Good flavor in the Pate with a good pastry crust. Absolutely nothing to complain about. 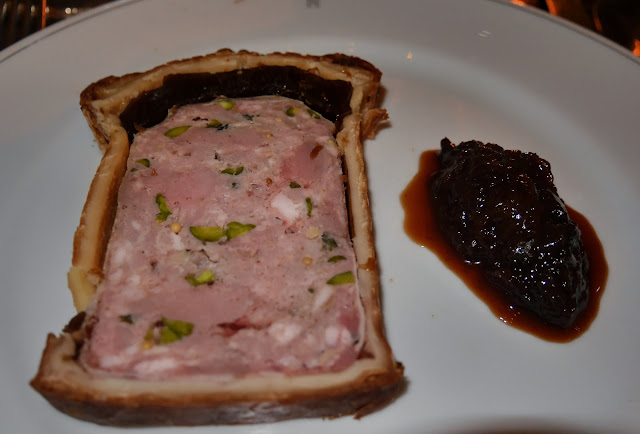 The second starter was stunning. Lobster Thermidor Tart. Lobster Thermidor was “invented” by the great Auguste Escoffier circa 1890. A Thermidor Sauce consists of Fish Stock, Cream, herbs, often egg and always Mustard. Traditionally, the lobster tail is cleaned, the cooked meat mixed with the sauce, put back into the Lobster Shell, covered with Gruyere Cream and gratinated. Here what was done was that the sauce and lobster was put into a Puff Pastry case, much like a large Vol Au Vent. It was fantastic, a well flavoured sauce, mustardy, soft lobster chunks in a crisp Puff Pastry. A Lobster Claw, crumb fried, as garnish. This is how to have Lobster Thermidor. No malarkey with Lobster shells and making a fool of yourself eating it. 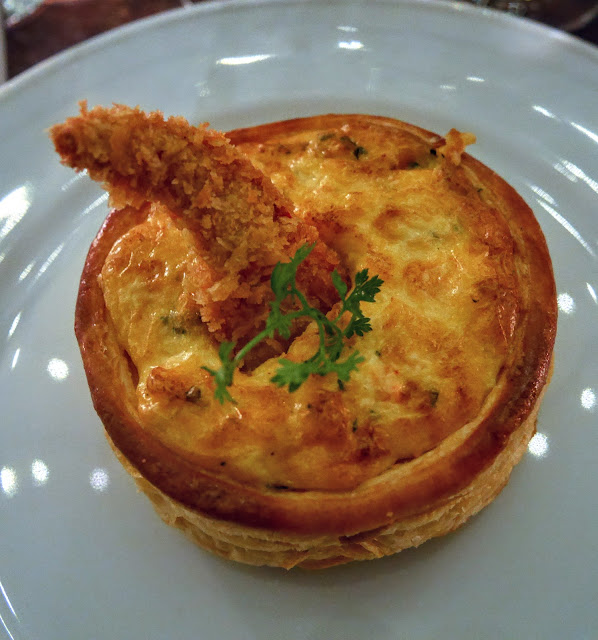 Now we were anticipating more great food. We were not disappointed. HRH The Queen of Kutch ordered the most popular dish on the menu – the Hand Raised Pork Pie. A Hand Raised Pie is typically English. This is made with a hot water pastry crust. Hot water and fat are combined with flour. The feature of this pastry is that once it is cool it retains its shape thereby enabling the filling to be inserted. Then it is baked. The Pork Pie was filled with chunky pieces of pork and bacon, thoroughly delicious. If that was not enough, the Pie was served with a rather delicious Pork Jus, sticky and deep flavor. Absolute knockout. 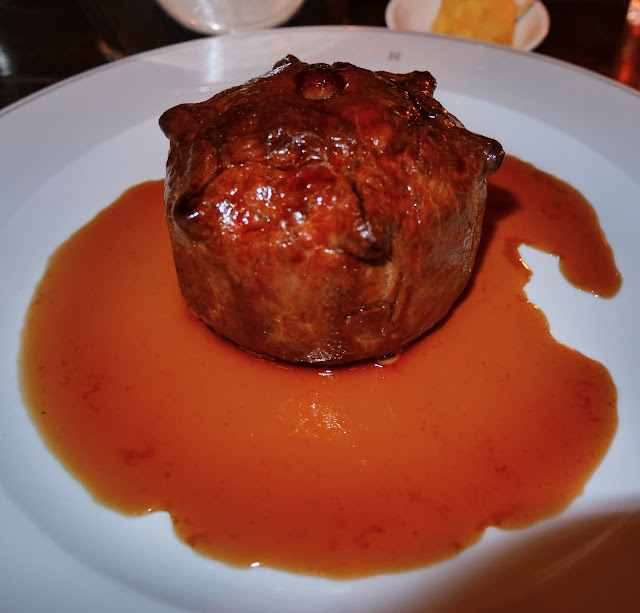 I ordered the Chicken, Girolle [Mushroom] and Tarragon Pie which was served with a very well-made Pea Puree. Deeply flavoured, moist Chicken and great crust. This was excellent though the Pork Pie was superior. Do appreciate the work done in decorating the two pies. Now imagine making probably 200 of these every day. This is hard work. 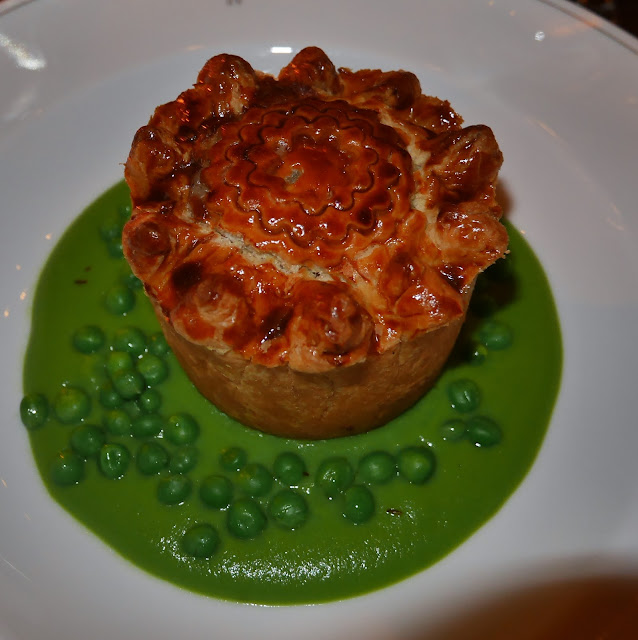 The food was filling, much more than normal. So, it was to be just one dessert. Lemon Tart with a Raspberry Ice Cream. Once again, the Tart base was top class. The Lemon Curd well made, tart and sweet well balances and a nice touch of a Lemon Jelly covering the Custard. 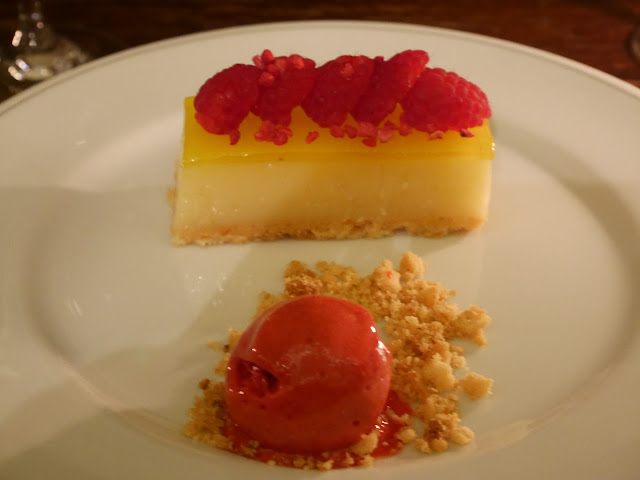 Reading this you will realize that our meal consisted of lots of pastry, Pastry on the Pate En Croute, Thermidor Tart, Pies and the Lemon Tart. As I have written earlier, there are Pastry masters at work in the kitchen. All the food we ate was better than good. Not a single weak dish. The only weakness was in the drinks. We saw that other tables had ordered some very good-looking Fish and luscious Burgers. The food looked good.

Without booze you could expect to pay GBP 50 or INR 5000 for all the food. Of course, we ordered two vegetable sides which I have not photographed. This is not cheap but the food is typically English, of very good quality and flavor served in a beautiful dining room. What more could one want? We will certainly be back here soon.


Posted by Stonethrowers Rants at 11:00 PM