I remember a time in the early to mid-1970’s when my dear departed father, Senior Mrs. Stonethrower and my kid sister all in the back seat and, me, a cook and driver acting as frontal air bags were packed into the Ambassador car we owned and set off for Poona. Those were simple times. Everyone owned either a Fiat – later Premier Padmini – or an Ambassador. Some poor lost South Indians who had moved to Bombay owned Standard Heralds. The mechanics of these cars was from the early 1950’s, when things were even more simple and unreliable. The journey to Poona included, if you were lucky, just one scheduled stop, at a picturesque spot, where we would all get out. The bonnet would be opened to allow the radiator to cool. The tea would be brought out. For some reason, the Thermos was always filled with strong sweet coffee. I presume coffee was thought to be a better reviver of tired bodies on these drives. To eat, invariably, there would be Mutton Pattice from the now long gone Gourdon, a restaurant and cakeshop at Churchgate. Those Mutton Pattice were, if I remember correctly, small and round, much like a cup cake. They were delicious, at once crunchy and flaky with the Puff Pasty outside, moist, spicy and meaty with the ‘Kheema’ inside.

Times passed, Gourdon, deteriorated and shut. Mutton Pattice were then bought from RTI and later a very good Mutton Pattice was sold by Oriental Bakery at Grant Road East. I remember eating the Mutton Pattice from Oriental when I was in College in the early 1980’s. Today, alas, I am sorry to say that getting a good Mutton Pattice is virtually impossible. The ratio of filling to pasty is such that all you end up with is lots and lots of pastry. The filling, whatever there is, has little meat and a lot of filler being onion, or coriander or even French Beans. Several reasons for the precipitous decline in quality. Firstly, the price of meat has gone up as has the price of other inputs. Customers are not willing to pay and have competing food that they can buy, the choice is much more.

Before going further, a bit of background following my research. A Mutton Pattice is available in two basic forms in Mumbai. One has Puff Pastry on the outside and is crisp, layered and flaky. The other is with mashed potato on the outside, soft. This soft version is rarer and is generally sold by Irani restaurants and Parsi food outlets. The puff pastry version is much more widely sold. Many people refer to the puff pastry version as a Puff. Also, the fillings of either pattice could be ‘mutton’ or more correctly goat mince, or chicken mince or even curried vegetables.

The word ‘Pattice’ itself is said to be a bastardisation or Gujjuisation [please note I am NOT calling Gujjus bastards] of the English word Patty. A Patty is a small flat cake of food, often minced meat. So, a Hamburger has a Patty. The word Patty was somehow changed to ‘Pettis’ as in `Ragda Pettis’ a classic Mumbai street side snack where you have a mashed Potato Patty served with curried Garbanzo Beans or ‘Channa’. So, Patty became ‘Pettis’ and then ‘Pattice’.

I do like a good Mutton Pattice, so HRH the Queen of Kutch and I thought of making our own. What is so difficult? You need to make a decent ‘Kheema’ which is not rocket science. Push comes to shove, you could also simply go to the restaurant that serves your favorite Kheema, pack a few plates and Bob’s Your Uncle. And, you need to get some Puff Pastry. Of course, you need to have a functioning oven to bake the Pattice.

I guess that for most of my readers, getting Puff Pastry poses the biggest challenge. No worries. The best place to get Puff Pastry is Paris Bakery, 278, Dr Cawasji Hormusji Street, Our Lady Of Dollors Church Lane, Marine Lines, Mumbai, Maharashtra 400002. Their phone number is 022 2208 6619. If you are going towards Churchgate Station and are on Marine Lines, on your left is the Our Lady Of Dollors Church. Stop your car there and walk into the lane. They will sell you raw Puff Pastry. It’s called “Khaari Nu Cross”. Call before you go and order it. Alternatively, if you live in Bandra, go to the bakeries on Bazar Road, and ask them nicely. They will sell you the stuff too. Keep it chilled.

Once you have made your Kheema, make sure it is robustly spiced, has enough lime and is really tasty. Chill it. Do remember that the Kheema should be reasonably dry and not liquidy. The Kheema should be able to hold its shape. If the Kheema is too wet, dry it out. If it is very oily, drain off the oil. Roll out your Puff Pastry. Fill in the Kheema, and enclose the Kheema in pastry. Make a couple of holes to let steam out, egg wash the pastry and bake in a 200 C oven till lovely and golden. Remove, let it sit a bit get your cold beers out or a bracing Gin & Tonic. Cut a big slice and enjoy.

We made a family sized one with 500 grams of Kheema. To accompany this, in a moment of creativity, we made Jellied Kachumber. Tomato Water, Onion water, lime, Green Chilly and Coriander. Jellied and eaten cold with the hot Kheema Pattice. 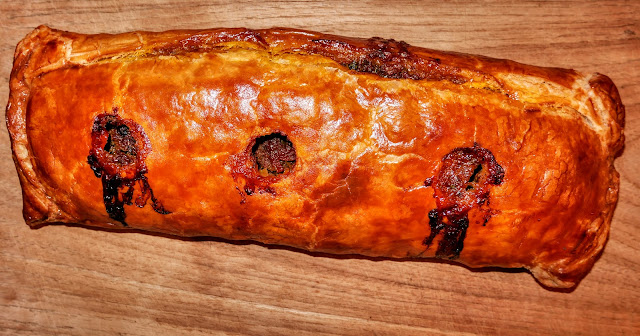 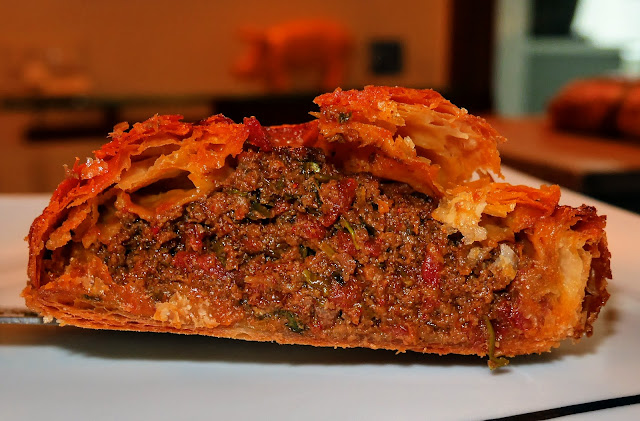 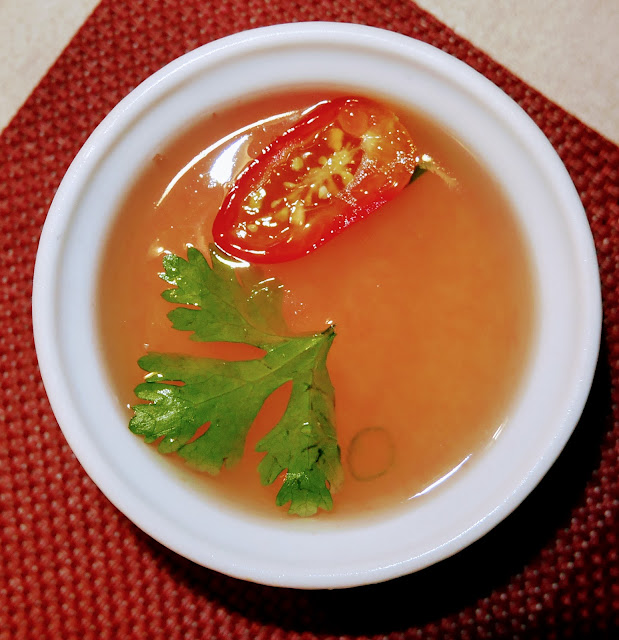 This was a very good meal.

I really do suggest you try this. The results are just so satisfying.


Posted by Stonethrowers Rants at 5:22 PM