As often is the case, this post is written with the usual disclaimers. Opinions are hurriedly made, with inadequate knowledge and information, based on a biases and may deeply offend people. However, every word of I write has been personally experienced and none of the facts are false. Opinions and surmises may be damaging, but facts, incontrovertible.

To start off, Portuguese cuisine does not really exist as a stand-alone business opportunity. There really are a miniscule number of Portuguese restaurants. No one says – let’s do Portuguese tonight! There is a reason for this, Portuguese food is rubbish.

Please do not tell me about Goan food being Portuguese. Vindaloos. Cafreals, Reachado and so on are heavily Indianised versions of food with a very suspect Portuguese origin. So much so that Chicken Vindaloo in the UK is an Indian dish. Certainly not Portuguese. You do have a couple of Portuguese dishes that have survived without being subsumed by local influences. Caldo Verde or the famous Potato Soup with Kale is one. This is widely recognized world over as a Portuguese creation. The other, strangely is Chicken Peri Peri or Frango Assado or grilled chicken. This we know not because of Portugal, but, because of the South African chain called Nando’s that has popularized the dish. So, finding Portuguese food in a restaurant is next to impossible. 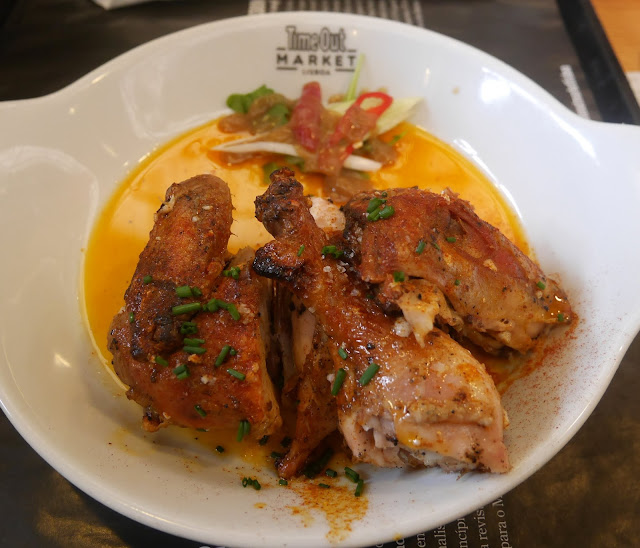 Now there are two Portuguese ingredients that are literally all pervasive. The first is obvious, Bacalhau or dried salted Cod. This ingredient is beloved by all Portuguese. It is said that there are 365 ways to make a dish with Bacalhau. The most popular way to use Bacalhau is to reconstitute the fish and flake it. Then they seem to make a “bhurjee”. Literally, I kid you not. This is known as Bacalhau a Bras. This dish drives all Portuguese mad with delight. Onion is sautéed till softened, then the shredded reconstituted Bacalhau added with beaten eggs and finally some “Sali” or potato straws. This is cooked to various stages and served in many presentations. You could have the mix put into a ring mould and served as a neat circular tower. Or slop it on a plate or even serve it with the egg still runny, quite loose.

The second all pervasive ingredient is the egg. In the 8 nights we spent in Portugal, I have not eaten as much egg. Eggs are all over. You get them in cocktails as foamed egg white, you get fried eggs topped on steak on sandwiches and anything else you can think of. Desserts are made with egg, the famous Egg Tart or Pata Negras. Other desserts are also made with egg sugar and flour. You get Doughnuts filled with an egg custard. Little or no cream is used. A Parsi would have been happy with the amount of egg consumed. 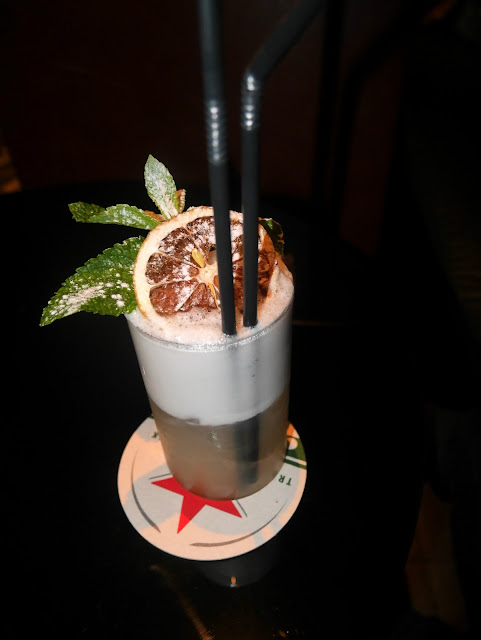 A cocktail - Port Wine Sour. The layer of white is foamed egg white 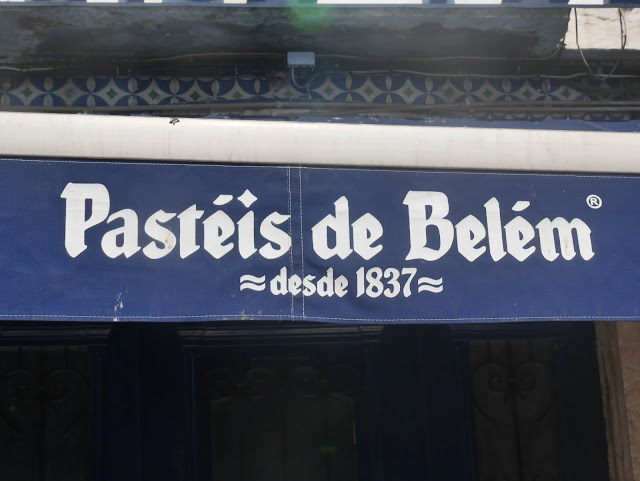 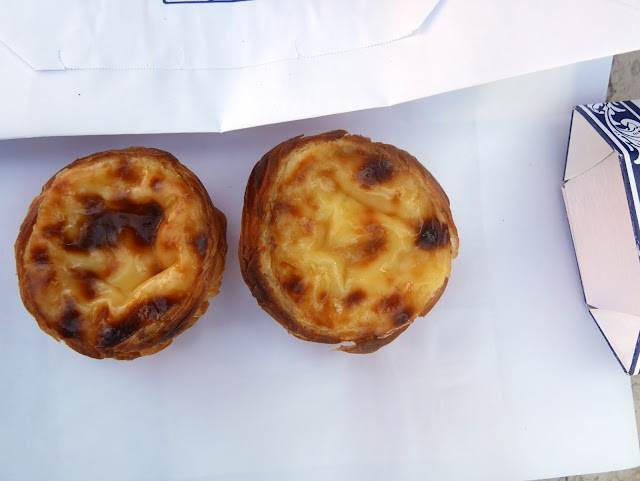 The food we ate was by and large very mediocre if not poor. The food looked and tasted like the kind of food you get at a Club in Mumbai that is stuck in a time warp. Much like the “Conti” food you get at the Willingdon or CCI or Bombay Gym or Yacht Club. Meat or fish simply cooked in a pan or on a grill, Some generic brown sauce poured over and served with a side of boiled vegetables and possibly a salad and topped with fried potato. The fried potato is not a French fry nor a wafer but something rather weird. It is a thickish wafer which sometimes is crisp and often soggy. Very disappointing food. 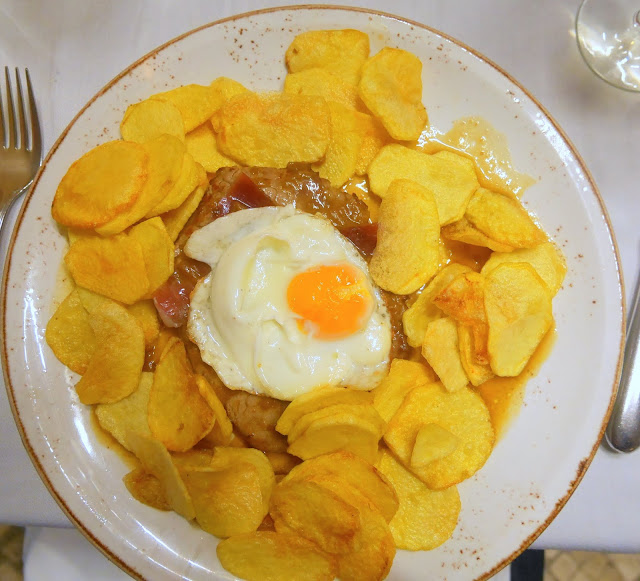 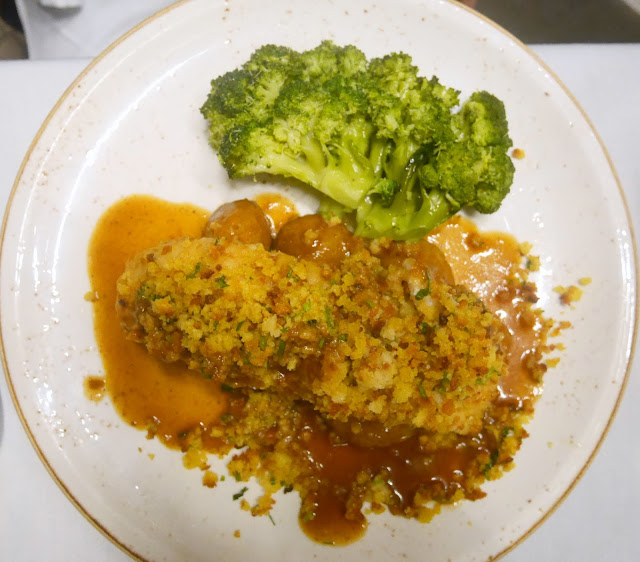 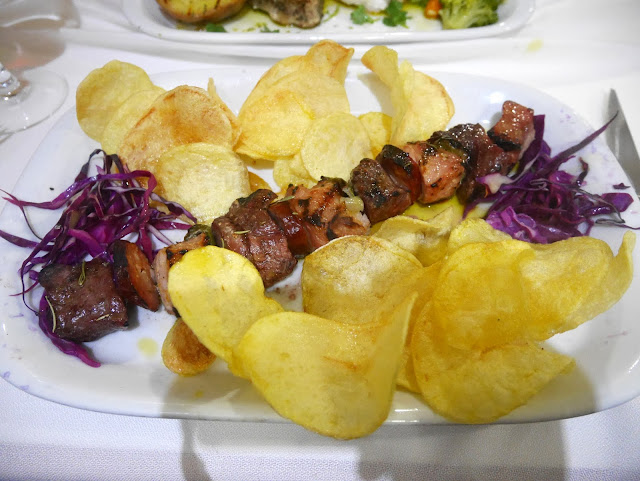 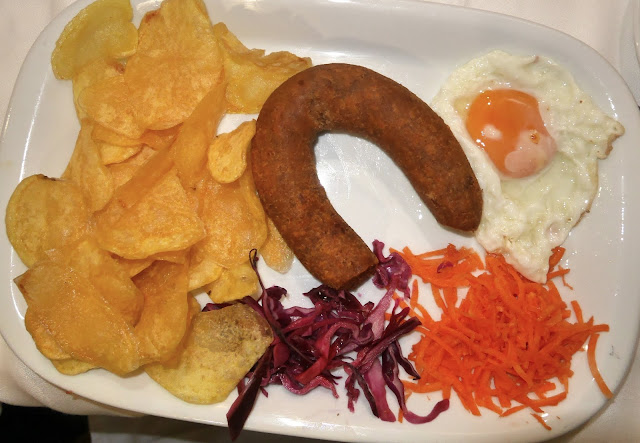 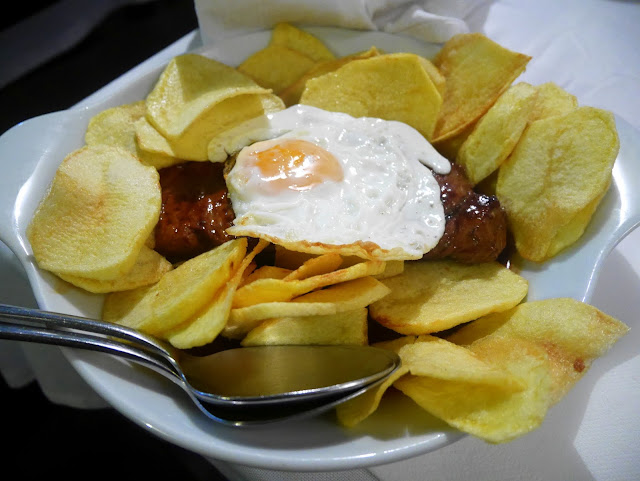 Another Portuguese Steak by a different name. Egg & Potato 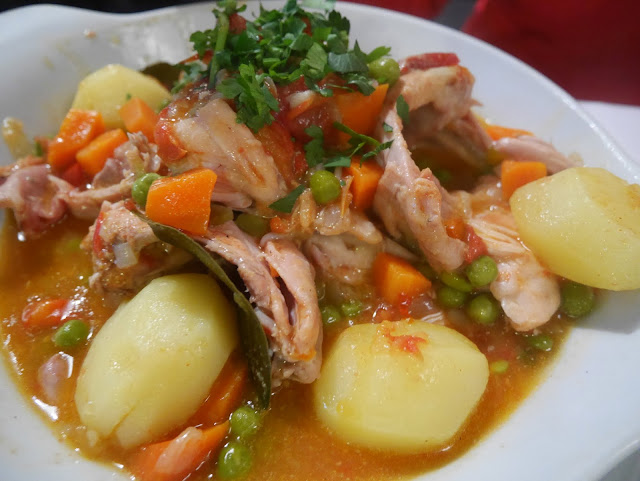 An odd dish was decent. Like an Octopus at a nondescript cafe in Alfeme. A Shrimps with Garlic and Clams with Garlic were decent too. 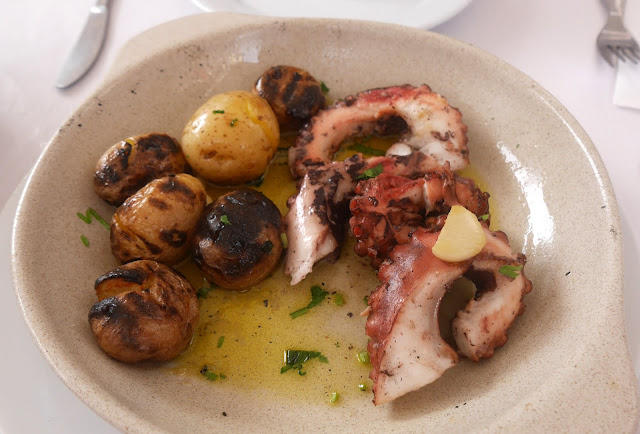 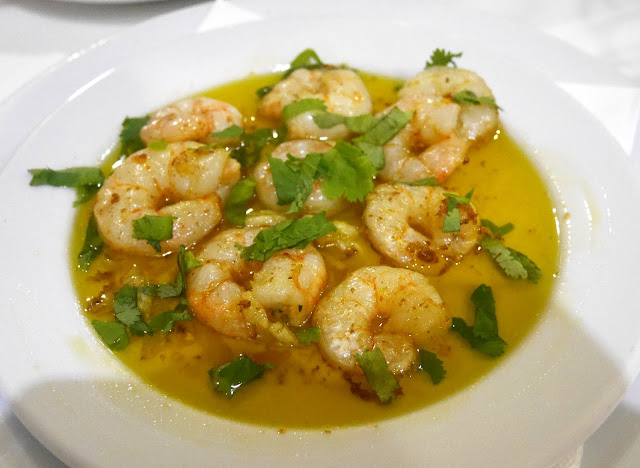 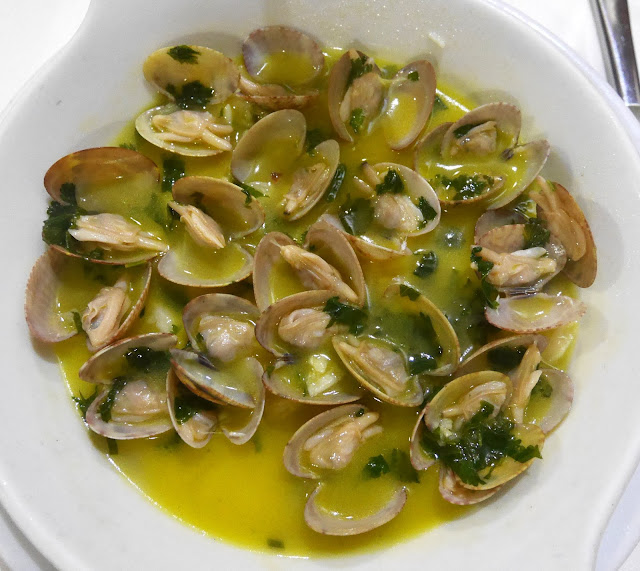 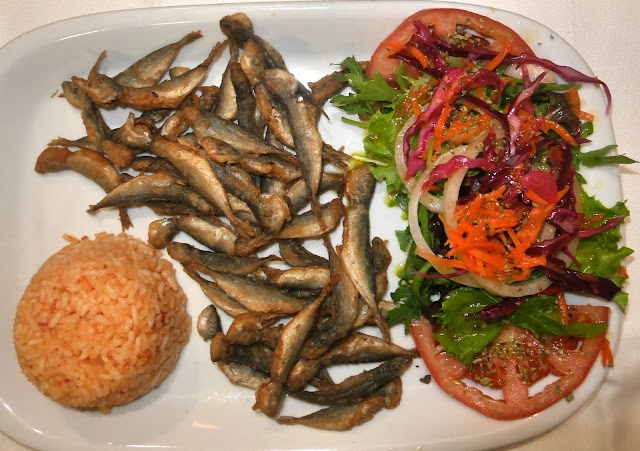 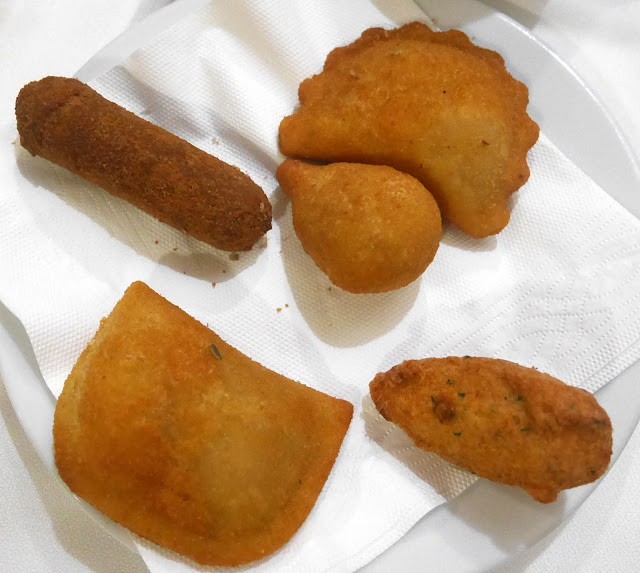 Yes the food was cheap but at the end of the day it was a waste of money. As I have written previously, the food was like Club food. When you are on holiday this is really not something you want as an example of local food. The point I am making is we had no intention of eating fast food or Pizza or Indian food. It was Portuguese food we wanted. Cheap has nothing to do with quality of food. Just by way of example, the food at Gajaali or Delhi Durbar or Khyber or Trishna, Apoorva or Thakkars or Friends Union Joshi and so on, is also relatively cheap. The food served at these Indian restaurants also happens to be an excellent example of great Indian food. None of the meals, and I mean none, excited us. Do have a look at the photos and tell me if I am wrong when I say Club food.

There was some very drinkable wine. This was served in a restaurant at 10 Euro a bottle which is Rs 700/-. This wine beat the living daylights of anything served in India, Indian or Imported. So, yes, wine was cheap and very good. No, it did not make up for the food.

One meal that we had in Lisbon was at a restaurant called Pateo by a highly regarded Portuguese Chef named Jose Allivez. He holds 2 stars in Michelin, thought the restaurant we went to does not have any stars. The restaurant was attractive, the vibe positive but the food was probably the worst we have had in a long time. A shellfish soup tasted like a fishy sweet tomato sauce. Strange. Both dishes, their interpretation of the clichéd all pervasive Bacalhau a Bras and a prawn dish called Prawn Açorda described as “A Must-Try Portuguese Dish: Shrimp, Bread, Garlic, Cilantro, Red Chilli And An Egg Yolk Cooked At Low Temperature” were positively disgusting. This was baby food, all mush, devoid of any texture and of the consistency of “Khichadi”. I must point out that on the table alongside us were two local girls, who, after much discussion, ordered the Bacalhau a Bras. It was hilarious watching them struggle to eat the mush. They spent their time making neat squares of the food, then rectangles, then dividing the rectangles into squares. They tried dousing the slop with Olive oil. Our plight was tragicomic, watching them made us smile, having to attempt to eat the paste and eventually waste it, was tragic. Truly horrible food. 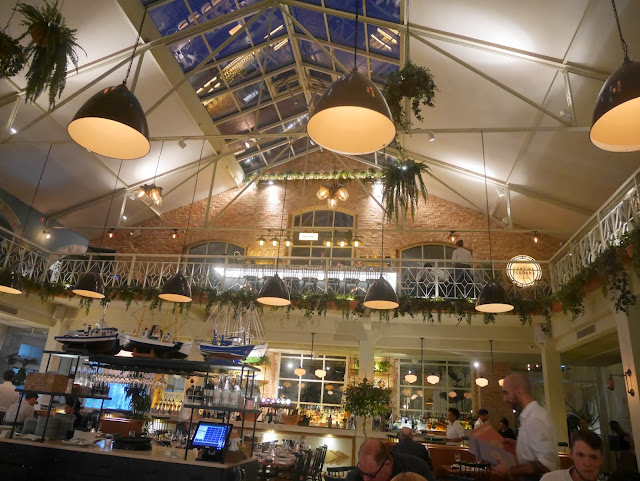 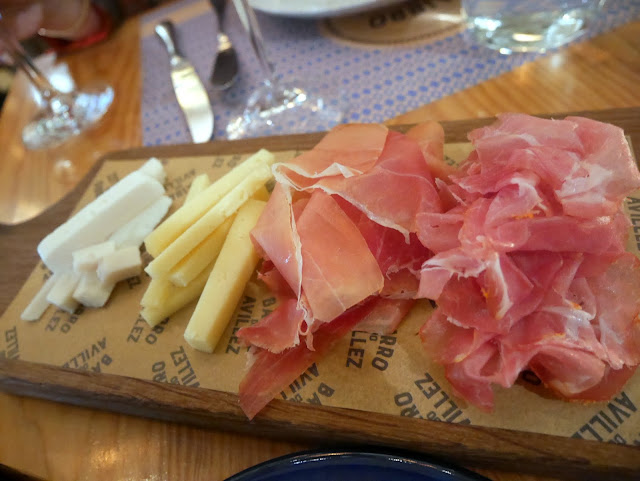 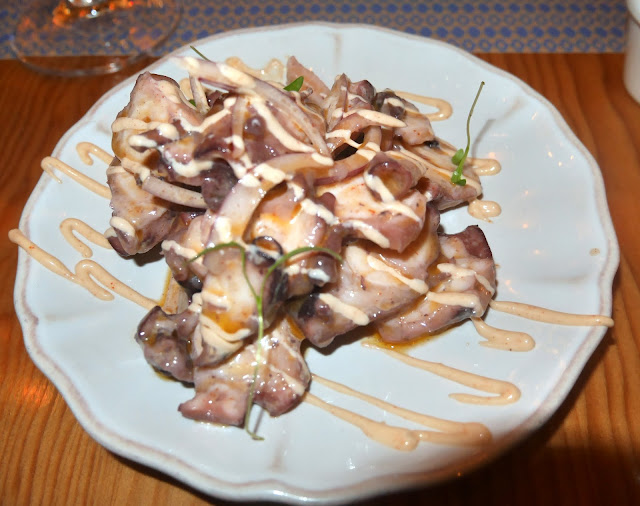 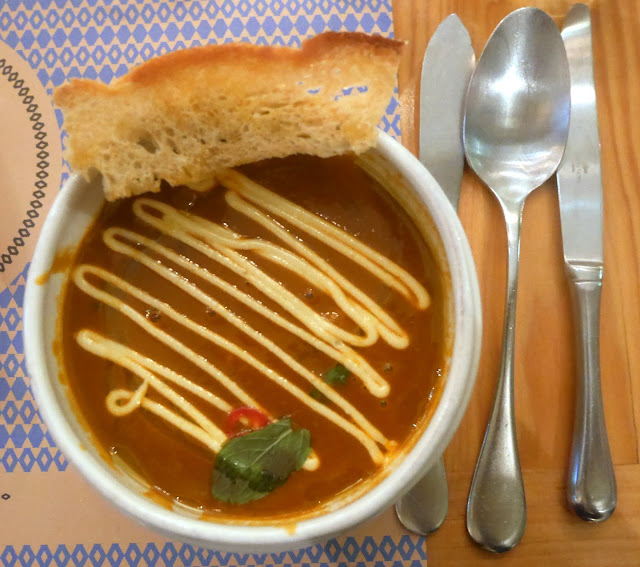 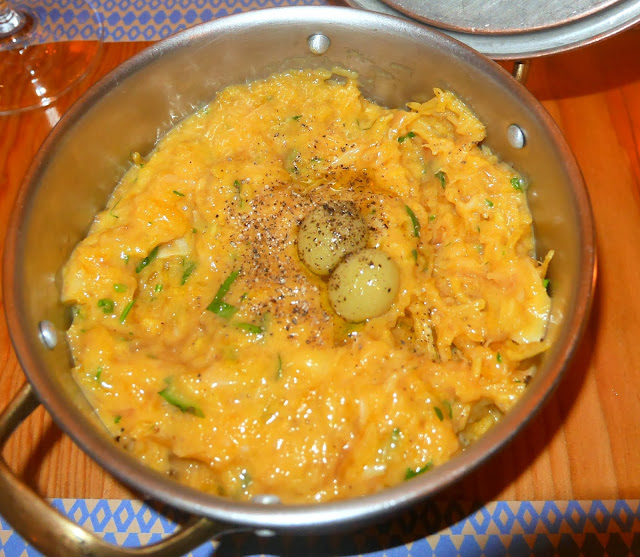 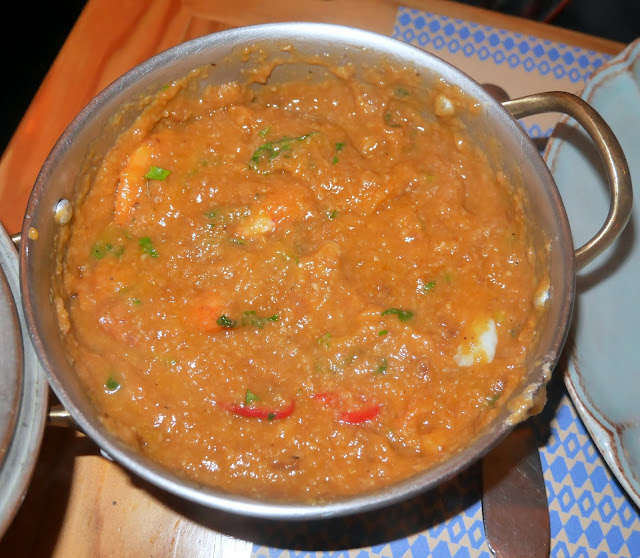 On the last night in Porto we decided to eat at the very swish and highly rated restaurant “Book” that was located in our hotel. This decision went against our grain but we were really so disappointed with mediocre food we were desperate for a decent meal. As you probably know if you have been reading my blog regularly, our policy is normally to eat local. In France, Italy, Germany, Spain and many other places eating local means really good food. Here in Portugal that was not true. Anyway, the food at Book was better, presented with much flair and in the end a rather good meal. 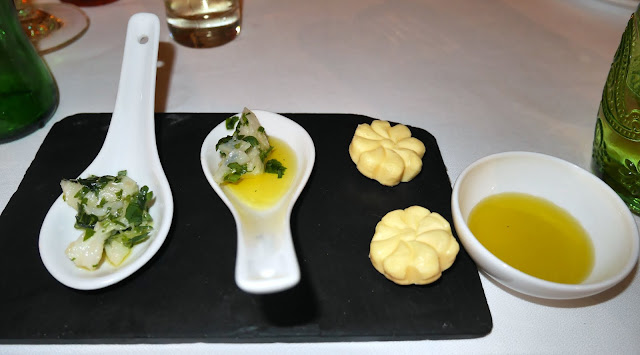 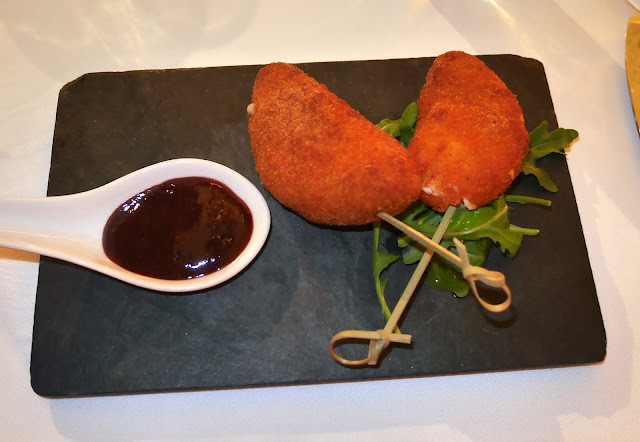 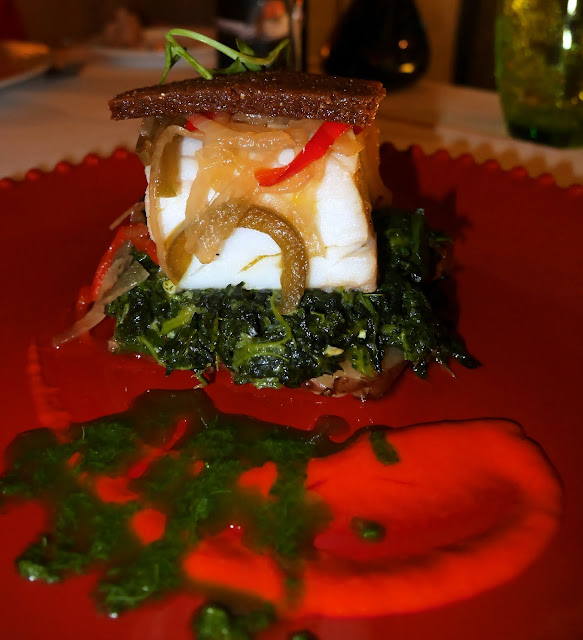 A "Millefeuille" of Cod, Spinach & Corn Bread or Broa 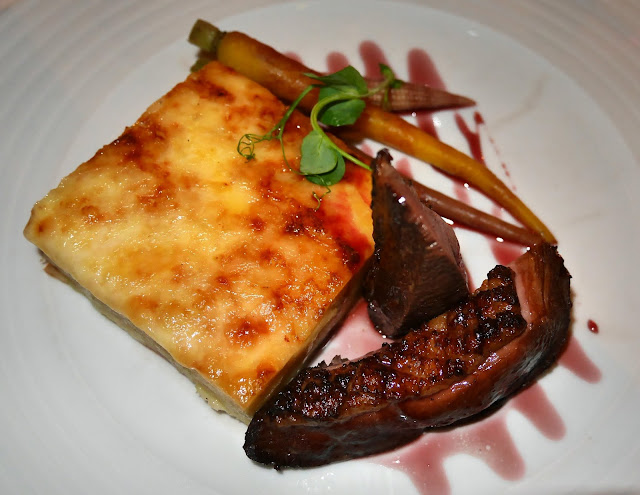 One of the specialties or local dishes in Porto is called Francesinha. This is a sandwich with steak, cured sausage, fresh sausage & Mortadella plus whatever other meat the establishment thinks fit. The sandwich is toasted the covered with cheese, grilled and served doused in a spicy sauce and French Fries. Oh, did I forget to mention, topped with a fried egg. This is formidable, so we requested our Francesinha to be split into two. The most highly rated Francesinha are served at 3 places, Café Santiago where we went being one of them. Francesinha was fairly nice but overrated. It came nowhere near a good Club Sandwich or Croque Monsieur or even a proper ham sandwich!! . 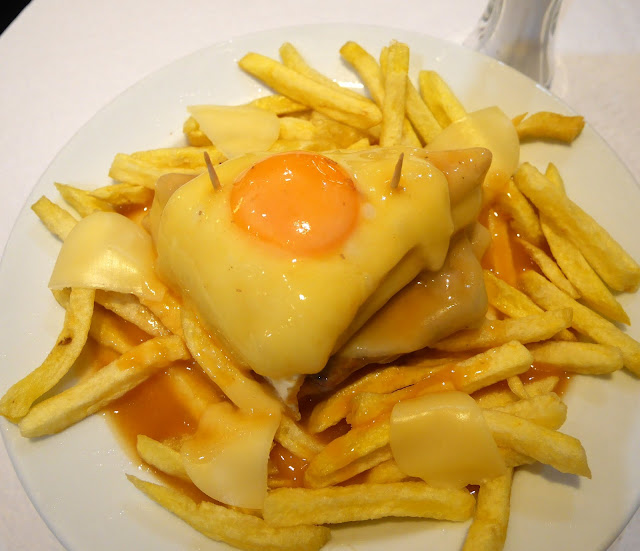 A few final points on food and drink in Portugal. The beer is excellent, really exceptional. The local brands Sagres and Super Bock served on tap were top notch. Drank plenty of beer. Ice Cream is very popular. You have several parlors all over often multiple parlors on a single street. Hamburgers are even more popular and there are several hamburger bars dotting the landscape. No, we did not eat any. Lastly, Portuguese Charcuterie is of good quality with excellent dried, smoked and cured Pork products. The famous Goa Sausage had its origins here. The cheese is also of good quality as is the Olive Oil. Please do remember that none of this i.e the Beer, Ice Cream Olive Oil, Cheese or Charcuterie is cooked in a restaurant. It is sourced, bought out and sliced or served. So, thankfully, the restaurant cant do much to fuck it up. Tells you something does it not? 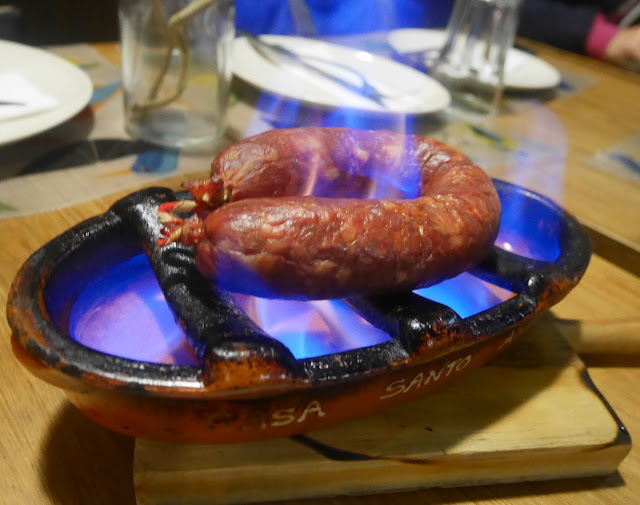 A Portuguese Chorizo cooked on the table. Decent 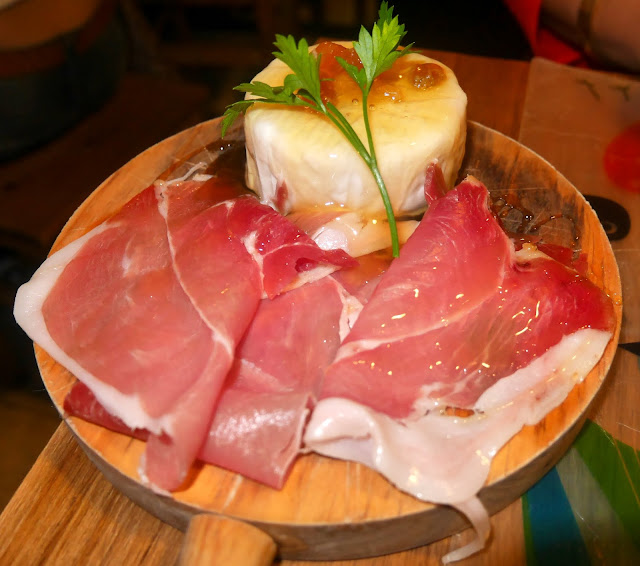 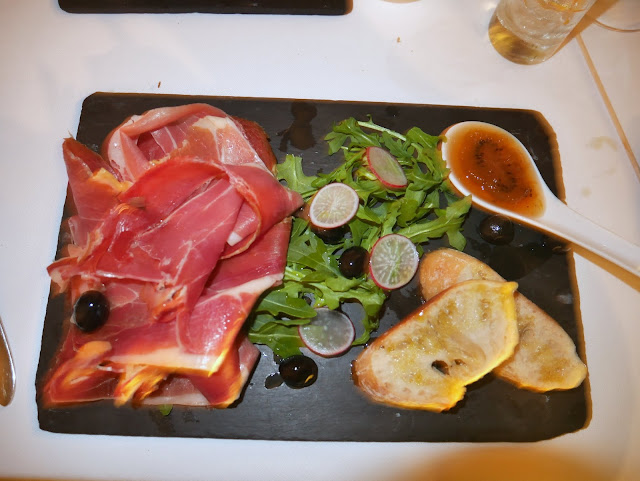 To conclude, food and drink in Portugal is cheap, probably the cheapest we have experienced. However, the quality of food and skill needed to prepare the food is very mediocre. If, you want to go to visit Portugal and are happy eating at the generic chains or eating generic quasi Italian food like pasta and pizza, then you should not have a problem. Otherwise, remember what I have started with. You do not have Portuguese Restaurants for a reason. Their food is unfortunately no good.

Posted by Stonethrowers Rants at 11:31 PM