The 9 11 Memorial & Museum is a new “attraction” - if I could use that word – in Manhattan. It was opened on 11th September 2011. Being warned of the potential rush for tickets, being summer, we had bought our tickets well in advance online.

Do you remember what you were doing or where you were on 11th September 2001? I distinctly remember. HRH The Queen of Kutch and I were in a tube in London when the service stopped and the train pulled into the Edgeware Road Station. There was a gaggle of Pakistani girls who said that there had been an attack and the World Trade Centre in NYC had collapsed. I thought they were talking shit. We walked from Edgeware Road to York Street where we were staying and switched on the TV, only to see the shocking images being run almost continuously on all channels. This must have been about 3 pm, shortly after the attacks. I remember, quite distinctly, that we stayed in riveted to the TV and at about 6 pm left to go for dinner. We went to a restaurant, now shut, called Veronicas at Hereford Road in Notting Hill. I recall telephoning my mother and asking her if she had any news of my nephews who lived in NYC and worked in finance. I suspected they would have had their offices in the area. Fortunately they are both well, in fact we are to have dinner with one of them in NYC.

The images of the two planes crashing into the Towers have always been deeply disturbing for me. However, and I have never ever mentioned this before, the image of the dome of the Taj Mahal Hotel burning when Mumbai was attacked has become even more disturbing and sad. Mumbai is my city. The Taj was where we all went Seeing it burning was upsetting.

Since the years of 9 11 we have seen a lot and read a lot about the terrible attack. Numerous documentaries and the film United 93 have provided us with new insights to the whole event. The movie Zero Dark Thirty also added to the knowledge. But this was going to be different; We were going to the actual venue.

To get there we caught a train, unfortunately on exiting the station, the signage was not too good. I understand that this whole are is still a work in progress, but some effort on signage could have been made. Since we had tickets we bypassed the longish line and went into the Museum/Memorial. 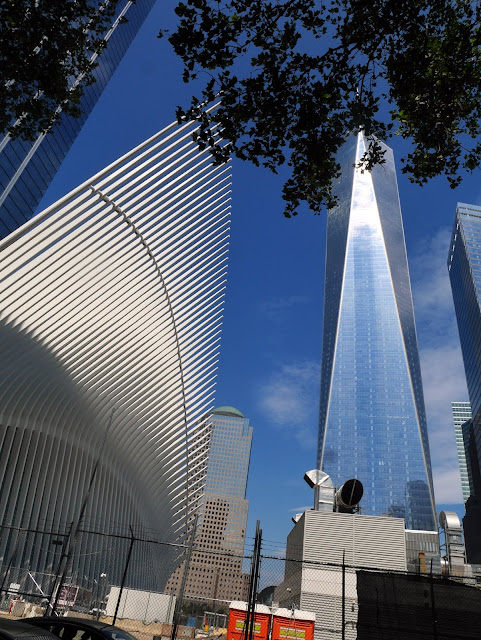 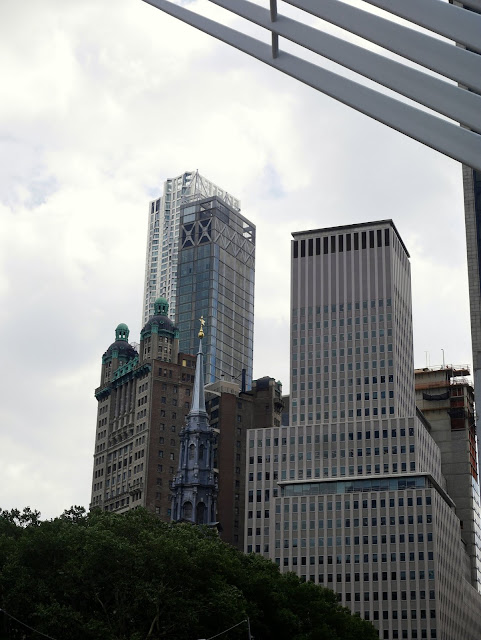 The Church, serene among the towering new buildings

The first thing we did was see the introductory film. On one level there was not much new material in the film, but on another level, watching the film brought tears to my eyes. There were many in the theatre who silently wiped tears. What struck me the most, were the interviews with President Bush and Dr Condoleezza Rice. You may have your views and opinions on Bush, many a joke has been made of his expressions when he was told of the attacks while in the class with schoolchildren, but I did not, for an instant, doubt his sincerity and desire to protect America and its people. He spoke of the fact that he was transformed into a wartime President. He spoke of how his country was under attack. He spoke with what I thought was deep sincerity and honesty. This is what moved me the most. The commitment to doing the job of leader of the free World. Why did this strike me as much as it did? Frankly because I come from India, and seeing our leaders speak inspires zero confidence. We in Mumbai had the terrible Terrorist Attack in November 2008. I cannot recall then nor now any leader giving me confidence. In fact, in the 9 years that have since passed, despite several documentaries being made, for whatever reason, in none of them do our leaders come out shining. So, when you have this low a standard, you admire a lot of how President Bush spoke.

The short film was over, and, still shaky, with emotions in turmoil, we set out to see the actual Museum. The Museum is large and covers a lot of space. The Foundation Hall which is huge and shows the foundations of the walls to hold back the river is quite something. The now iconic “Tridents” which symbolize the World Trade Centre, and the flag which was so spontaneously hoisted by firemen, to me were tear inducing. The staircase used by occupants showed how narrow and difficult escape would have been. The huge fragments of steel, twisted, split and shredded by the force of the impact, the heat and the stresses of the mis-balanced collapsing structure were testimony to the massive damage caused by the flying bombs. The photographs of the victims and the 2983 blue tiles were a nice touch. All this was fine. 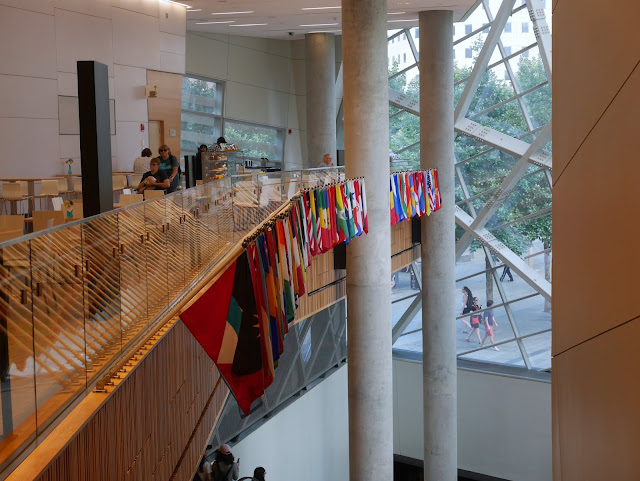 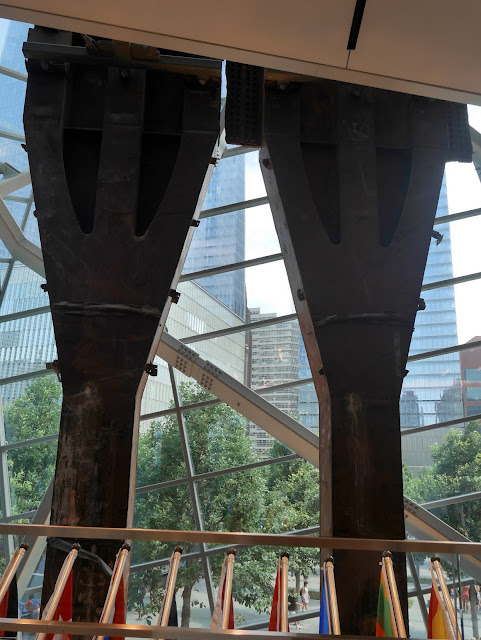 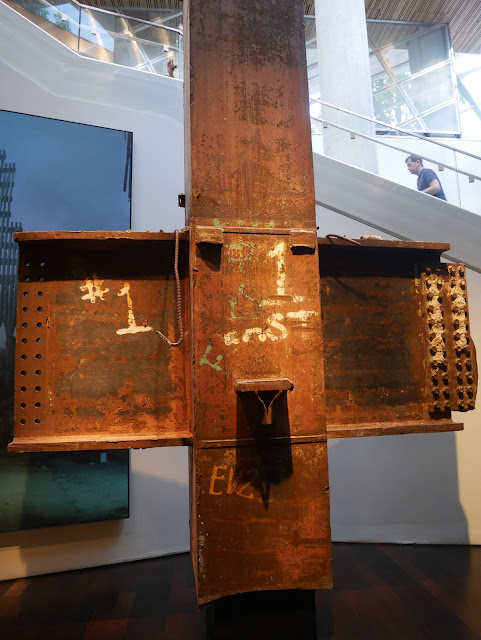 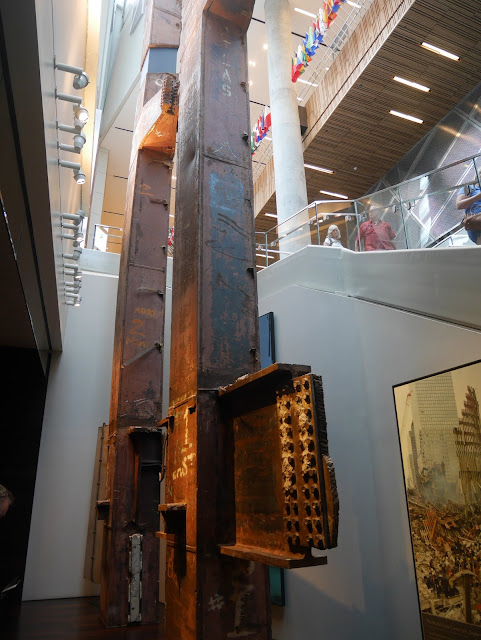 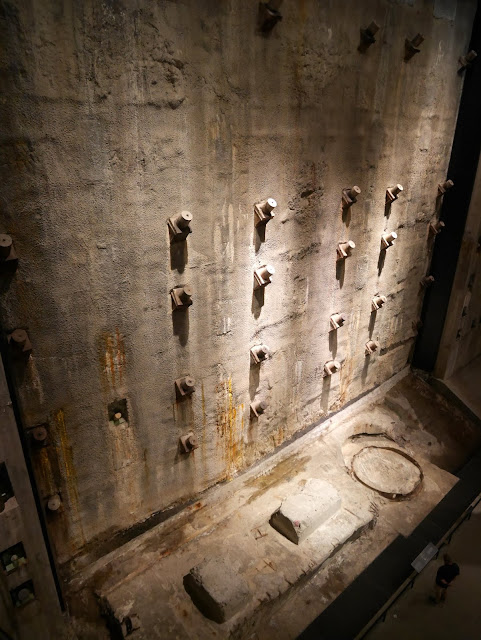 There is a large section of the Museum describing how the Towers were constructed, details of their size and matters relating to technical aspects of the Towers. This was probably a little unnecessary.

However, to my mind, what was totally unnecessary and over the top was the fact that the Museum had so much trivia that it seemed to have become a joke. Glass fragments, ID cards, damaged fire Trucks, commemorative motorcycles, a damaged door of a police car, and, I kid you not, Mr., Gupta’s slippers. Yes! Mr. Gupta’s slippers. The explanation next to the slippers stated that Mr. Gupta fell ill, he was taken to hospital, treated and discharged. He had no footwear. So a hospital employee gave him a pair of slippers. I mean seriously? This is where I believe the Museum lost the plot. There really is no need to get into so much detail.

We watched another film, something that seemed to me to be a poorly made documentary called Rebirth At Ground Zero. The Museum Store with garments, T Shirts etc. seemed rather unnecessary for something as somber, serious and upsetting.

All in all, this was an example of what America is often accused of. Managing to produce a wonderful package, with a mascot, in this case being the image of the Twin Towers rather than the Disney characters, successfully mixing the ingredients of the `masala’ - nostalgia, emotion, sincerity, thoughtfulness & gravitas - coupled with the obligatory café’s, water bodies and souvenir shop. Creating a hugely sellable money generating package. This has been done in Disney, and the several similar centers across America.

The problem is, in my opinion, that this does not seem fitting for a 9 11 Memorial. It is fine in Disneyland, this was not Disney, this was real, many people died, 2983.

Posted by Stonethrowers Rants at 6:56 PM