HKK is Hakkasan’s younger, much smarter and much better brother. I must confess that we are not fans of Hakkasan and much prefer Yauatcha. Some weeks ago we saw a documentary on Chinese food and one of the places that featured was HKK. We were most impressed. HKK has one star in Michelin. So when our dates to London were finalized we made our bookings. The Hakkasan Group also has a modern Japanese Restaurant called Sake No Hana. We have not been there.

Chef Tong Chee Hwee is the Executive head Chef of the entire Hakkasan empire. HKK is his experimental kitchen from where he and his team “develop new dishes inspired by the diversity of Chinese cuisine. His unparalleled skill and artistry is exemplified in his unique creations that tell the story of both traditional and modern China.” Joining us for dinner was our old and dear friend the Doctor Businesswoman whom you would have read about in earlier Posts. She is our frequent dining companion and is a fellow Bon Vivant.

HKK is located in the City. This area is a little confusing to navigate, the streets are narrow, short and many have no proper signage. Do we not deal with this every day in Mumbai? We got lost. I walked into an office building and asked the two Black Guards at the reception if they knew where Worship Street was. They had no clue. Their accents were indecipherable. I thought they were taken of the trees of Gambia and employed primarily as they looked fierce. Stop being Racist. Still thoroughly lost we stumbled along and reached a map. Figured out where we were and made our way to HKK.

The restaurant is a large square box with a large window offering views of a spotless white kitchen. The kitchen staff were all Oriental, the front of house were almost all Caucasian. Very unusual for a Chinese Restaurant. Disturbingly, for me, despite being such a good restaurant and rather expensive, there were no tablecloths.

We were handed out menus. Basically there were just two options a 5 course or 9 course tasting menu available in vegetarian or non-vegetarian. This could be paired with wine or soft drinks. We chose the 9 course non-vegetarian menu and opted for our own wine and not the pairing.

I do not want to describe each dish we ate. But suffice to say we were absolutely blown away. This was superlative food as you will see from the photographs. 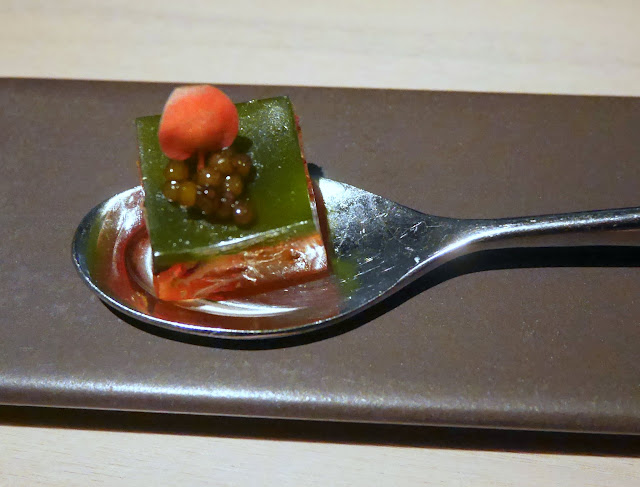 The Amuse Bouche. A Jelly with Caviar and Hazelnut. 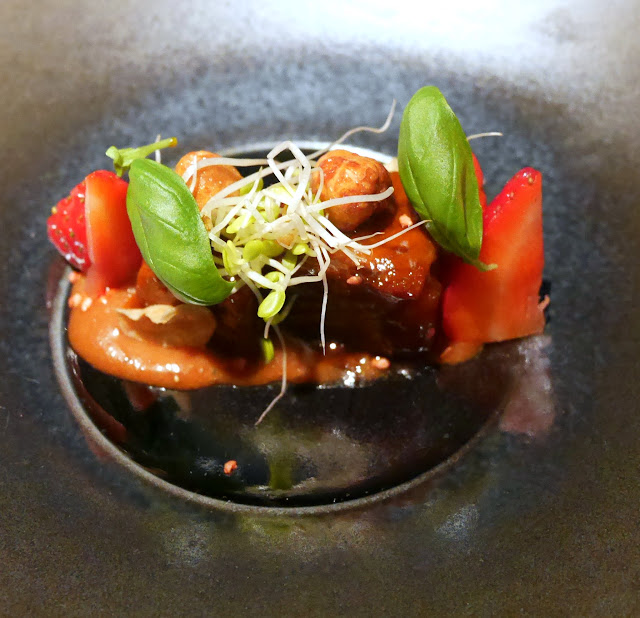 
This was a outstanding dish. It was grilled Wagyu Beef with Strawberry, Basil and Hazelnut.The textures in this dish was most interesting. 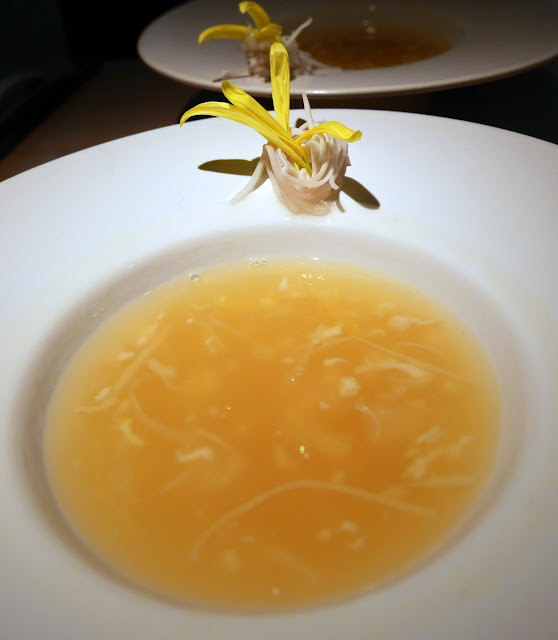 
This was probably the best Chinese Soup I have eaten. Full of Umami flavours. Fish Maws are the Swim Bladder of large fish. This is dried and is a Chinese delicacy. Fish Maw is one of the big four traditional Chinese Delicacies along with Abalone, Sea Cucumber and Shark Fin. The rim of the bowl has a Chrysanthemum Flower and Coconut which was to be added to the soup and stirred. 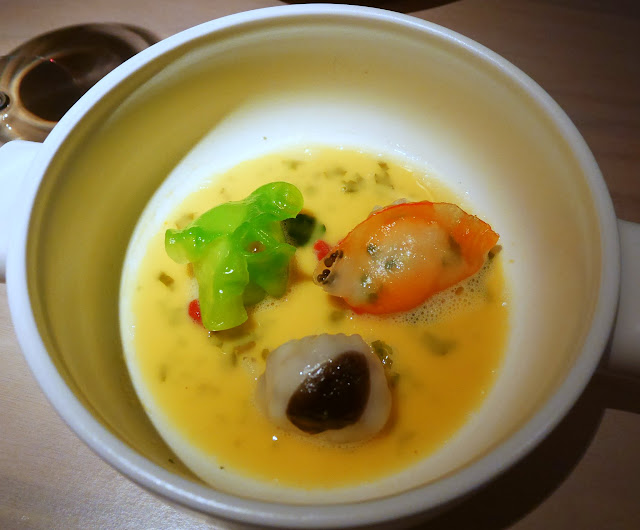 This was one dud dish. This was the Yin Yang Dim Sum. In China, the number 3 is considered good luck. So Yin Yang Dim Sum is a bit of a confusing name. You got 3 dumplings not two. They should have called them Bish Bash Boosh Dim Sum. Anyway, while the fillings were excellent, the skins of the Dim Sum were rather unpleasant. The Black Dumpling was Abalone & Cuttle Fish, The Red dumpling was Lobster and Water Chestnut and the Green was King Crab and Prawn. All Crustacea or shellfish. The sauce was most interesting. It was a shellfish sauce with Goji Berry. Tasted like a Bisque. Very good and very logical. 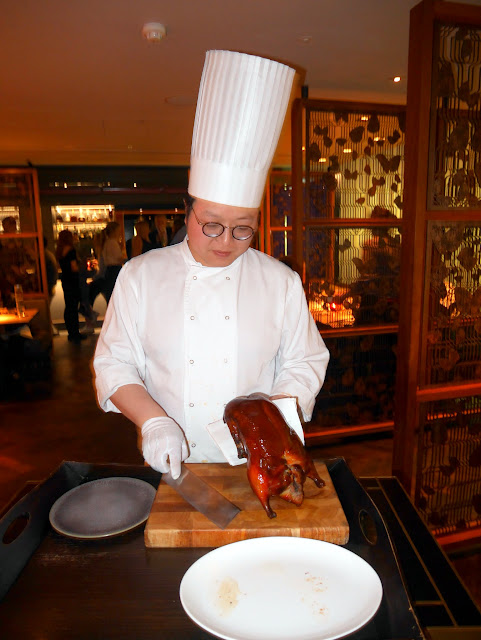 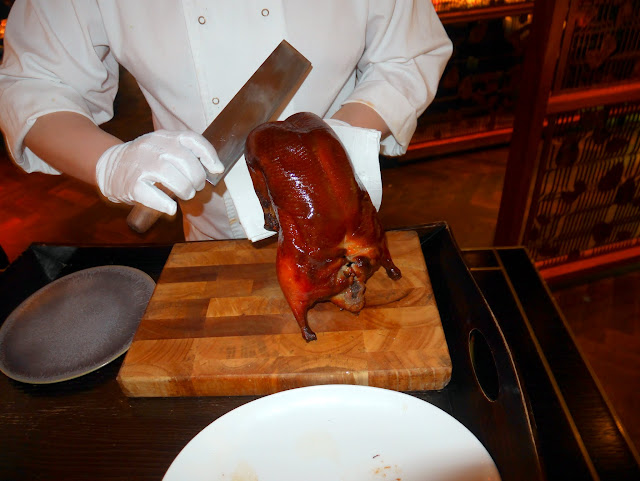 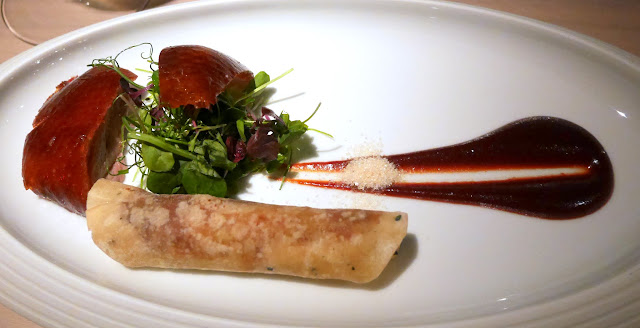 We have had Peeking Duck in several places ranging from Da Dong a genre busting Peking Duck restaurant in Beijing, to Duck in the Summer Pavilion restaurant in Singapore to the excellent Duck served at the China House at Grand Hyatt at Kalina in Mumbai. This duck served at HKK was better than all those. I believe that this was not only because it was a better duck, cooked more skillfully but, more importantly, you were served a small portion of 3 cuts and not the whole duck. If you look at the photo, left to right, you have a piece of Duck Breast with Skin, a piece of just Skin a deep brown colour to be eaten with the smear of Hoisin Sauce and Sugar. The pancake at the bottom contained the classic Duck with strips of Cucumber and Spring Onion. All different textures all totally delicious. 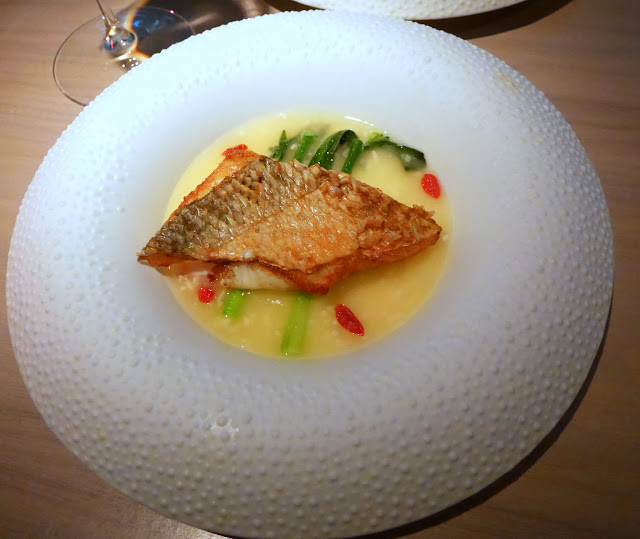 
This was another superlative dish. The cooking method in the dish was steamed. However, the skin was crisp. As crisp as a potato wafer or `papad'. The vegetable you can see below the fish is Kai Lan. The sauce was a Buerre Blanc partly French and partly Chinese. The liquid from the cooking of the Kai Lan was the base with garlic and butter added. Serving Fish with Burre Blanc is a classic French style. Here the Buerre Blanc was distinctly Oriental as it had the cooking liquid from the Kai Lan. Beautiful, skillful and inventive cooking and a inventive dish. 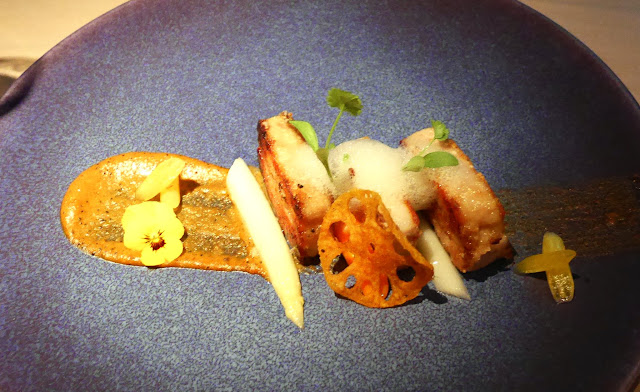 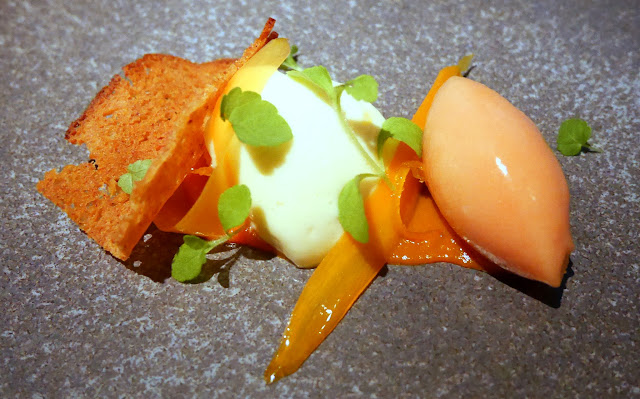 Now it was time for the first of the two desserts. The Baby Carrots were cooked in Honey which combined well and the Blood Orange Sorbet was a refreshing contrast. 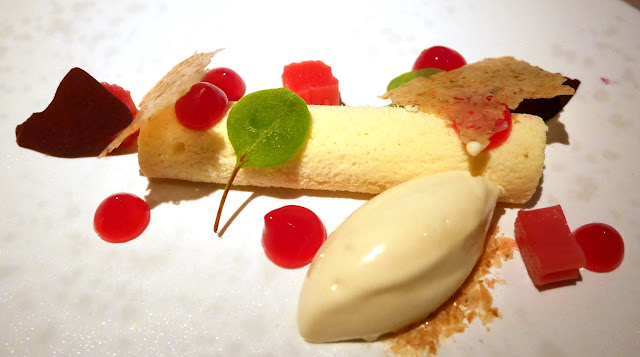 This was the final dish of the meal. I thoroughly enjoyed this dish. You had little blobs of Rhubarb Jelly and a Jasmine Ice Cream. Lovely and refreshing.

The evening was wonderful. The service excellent and the meal very well paced. You did not feel rushed nor did you feel that you were getting full. The profusion of 9 plates of food plus an Amuse Bouche and a Petit Four to end did  not make the evening boring as this is often a problem with so many courses.

If you do want a change from the usual Chinese meal do eat at HKK.


Posted by Stonethrowers Rants at 9:55 PM