Our old friend the Doctor Businesswoman from London was in Mumbai, on business. After aligning our respective calendars the next decision to be made was where we would dine.

You may recall that when I had written about Bombay Canteen earlier, I had said that it was an uneven experience, the service was bad, the food good but marred by the fact that the food was served lukewarm. This time the experience was better, much better.

The basic rules had not changed. You had to reserve a table at either the 7.30 pm slot or the 10 pm slot. Children under eighteen are not allowed. We had no problem with these rules, in fact we would be happiest if they were applied across the board at all restaurants in India.

Mercifully the weather was kind to us and the rains had eased leaving us with a much needed dry spell. We arrived probably 5 minutes before Doctor Businesswoman and were shown to what we thought was a decent table giving us an unrestricted view of the kitchen. Drinks were swiftly ordered, a beer for me and Vodkas for HRH the Queen and the Doctor Businesswoman. Soon a waiter turned up with what they call `Chintus’ which cost Rs 40/- each. These are small portions of what we call `small eats’ or `chaknya’. We got a pickled vegetable and some spicy Cheese Straws. Both good. Drinks were flowing, conversation was easy and animated. 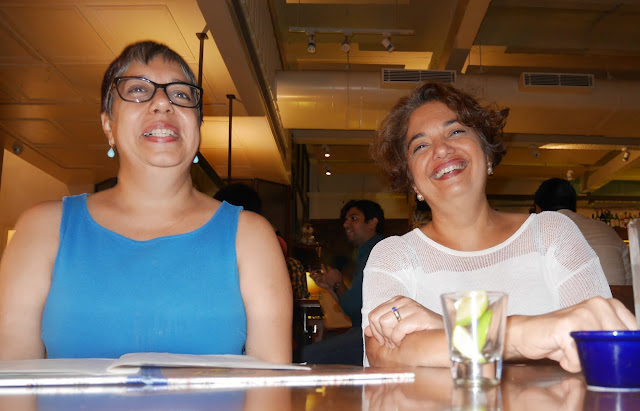 HRH the Queen and the Doctor Businesswoman 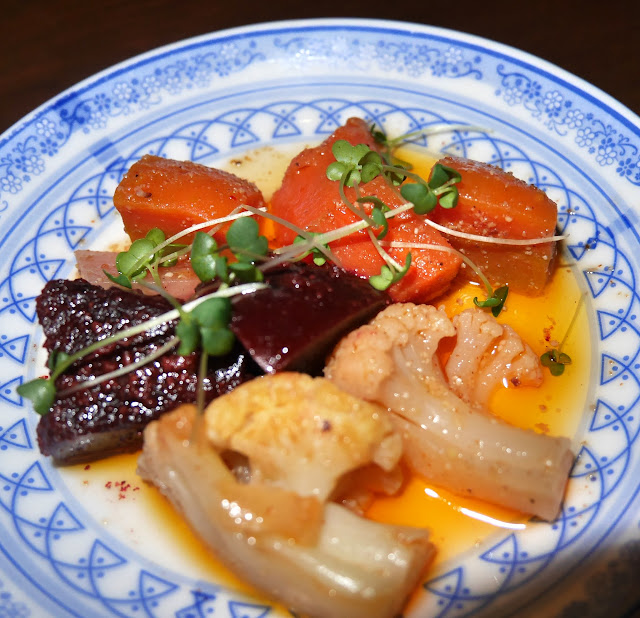 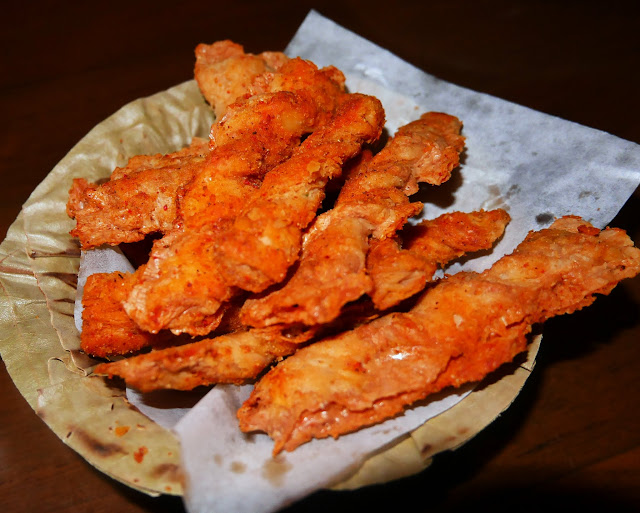 Starters were ordered. Sea Food Bhel served cold which was something we had not had before. This was good. Prawn, Squid and other unidentifiable seafood was mixed with pickled Garlic, Bean Sprouts and mixed with a sort or creamy mayonnaise yogurt sauce garnished with Sev. A good dish, cold and refreshing. The other two starters were the remarkably good Eggs Kejriwal and the Methi Theplas with Pulled Pork Vindaloo. Both super. 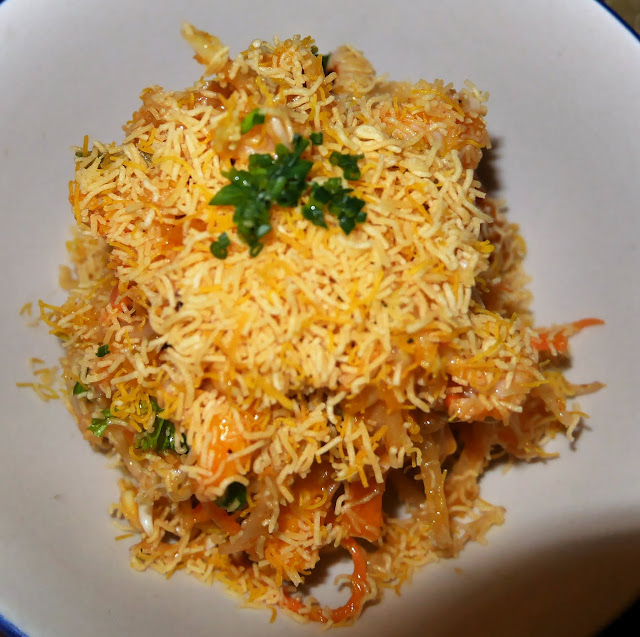 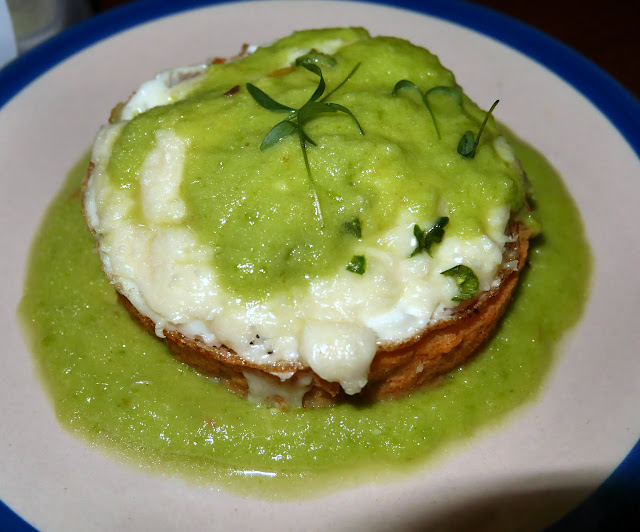 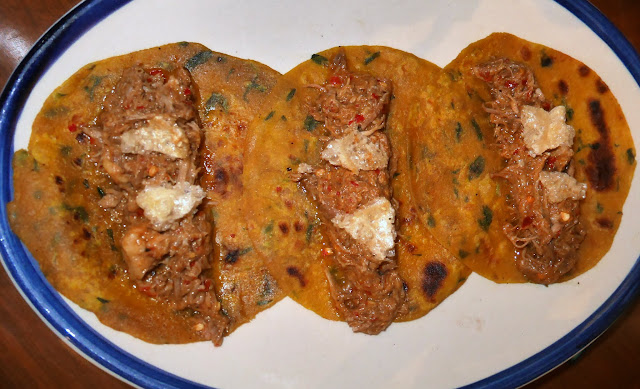 Ordering the mains proved slightly problematic. There were so many dished we wanted but with our limited appetites we had to edit our choices. HRH the Queen of Kutch and the Doctor Businesswoman were very keen on the Brown Butter & Green Chilli Dosa which was stuffed with grilled Shimla Mirch, Turai, Ashgourd & Batata Chilli Fry. Most intriguing dish. Basically a Masala Dosa with an exotic filling. Nice, but not something I would order again. To offset this vegetarian dish we needed the Bheja Kheema Ghotala. This was spiced minced lamb [well goat to be precise] with some brain added in and topped with a soft fried egg. This is a typical Bombay dish. This was served with `Maska Pao’ Excellent. Good Kheema well flavoured with some bits of creamy Bheja what’s not to like? Thankfully the dish was served hot. With this we had to have the `Choriz Bunny Pao’ which was delicious the last time around. This is the extremely tasty Goa Sausage to which are added Double Beans and the stew is placed in hollowed out bread. All the food was polished off despite complaints of being full. 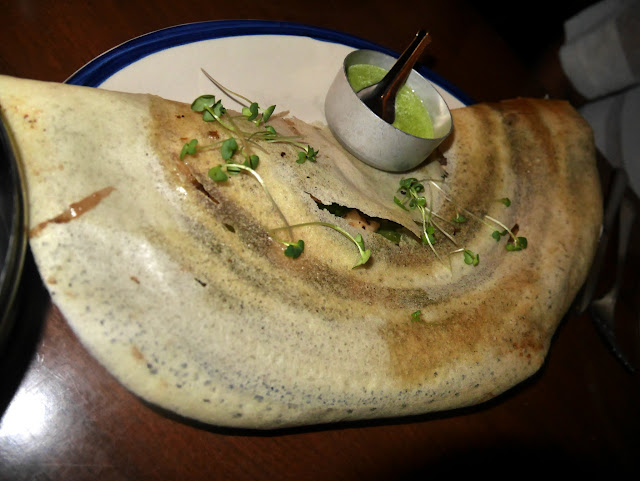 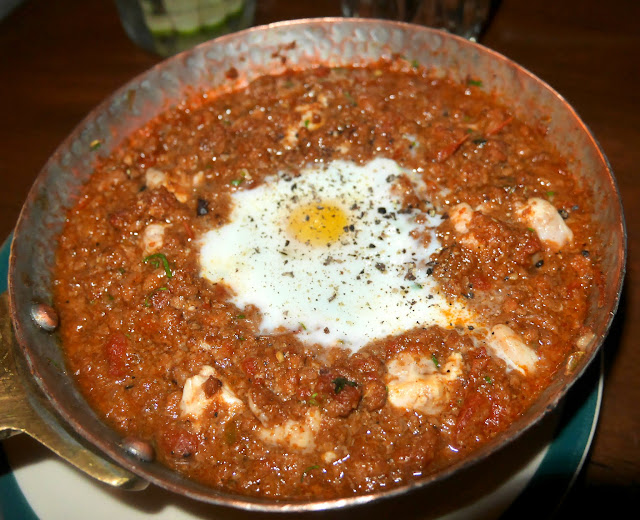 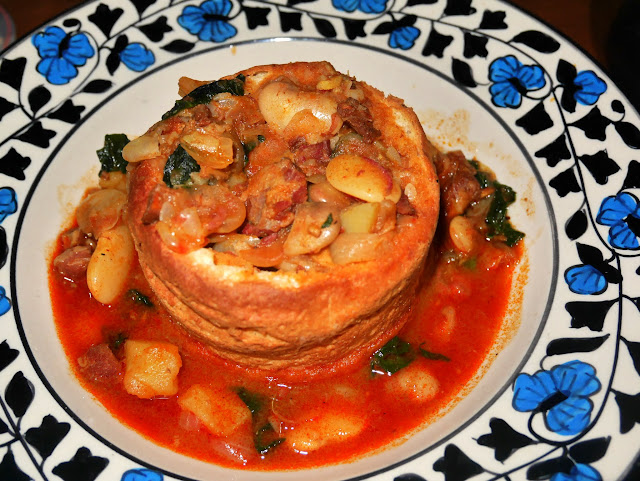 We could not possibly have dessert after this, but no, the Doctor Businesswoman was tempted by the Falooda Sundae which is served with Strawberry Jelly. We got a large jar of the Sundae and a smaller old fashioned bottle of milk which you poured into the Sundae. A childhood delight fancyfied for adults and great fun to eat. 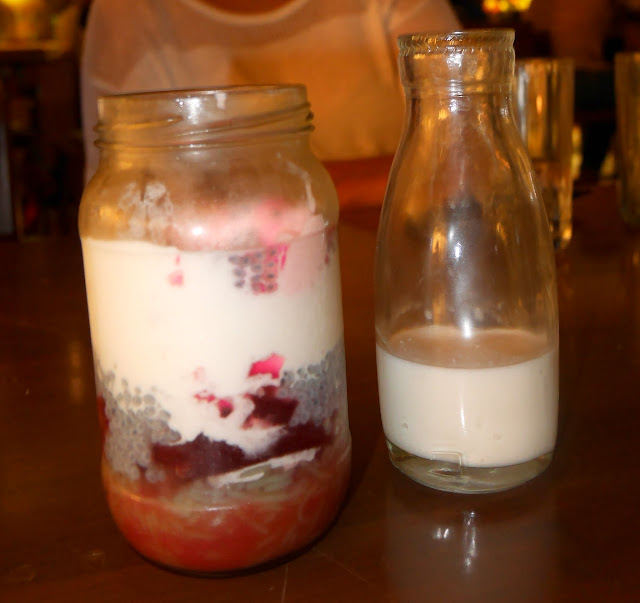 All in all a great evening with good food. A word about the service. The waiters are still clueless, however it’s the Captains who run the show, and they are good. Service had moved up several notches from the last time we were there in April.

The restaurant was packed to the rafters. And why not? With food as good and interesting and trendsetting as this, the restaurant deserves to be full.

Posted by Stonethrowers Rants at 9:58 PM