December is a festive month. It is the time for eating and drinking and generally having a whale of a time. The weather is nice, people are happy and smiling, NRI’s are in town, restaurants are full; there are fairy lights all around. It is a good time to be in Mumbai.

For many years we cooked a ham at Christmas time. We had ham loving people over for dinner and what was left over was given to friends. Then, in 2009 we had to give our yearly ham party a miss as we were in the midst of shifting to our new home. For some reason, in December 2010 and for the next 3 years there was no ham made. This year we had to do it. December 20th 2014 was the dinner party with Ham as the centerpiece.

The first step to cooking a ham is buying a smoked uncooked ham. The Bombay Gymkhana and the Yacht Club cook and sell you ham. But getting an uncooked one is slightly trickier. In the very old days, when I was a hot shot lawyer travelling to Delhi, I used to get a ham from Pigpo a very famous Pork Shop at Jor Bagh in Delhi. They knew me as the `Bombay Ka Vakil’. I used to call them from Bombay, order the ham collect it on my way to Delhi Airport and pack it in my Pilots case. It fit perfectly. Then, for many years we got our hams from Anup Hukumchand’s shop Highland Cold Storage at Dadar. This time we decided to get the ham from Farm Products at Colaba. So an order was placed, and a deposit of Rs 500 was paid.

A cooked ham costs about Rs 2000 per kilo. So a 5 kg leg will set you back by Rs 10,000/- An uncooked ham costs Rs 650/- per kilo. Not only does it make sense buying and cooking your own ham from a purely economic perspective, and, you can get far better results doing it yourself.

On the given day we drove to the shop selected a 5.5kg smoked uncooked leg and asked them to debone it for us. Once that was done the ham was tied securely, packed and the resulting 5 kg ham was carried back. The car smelt lovely with the aroma from the smoke. 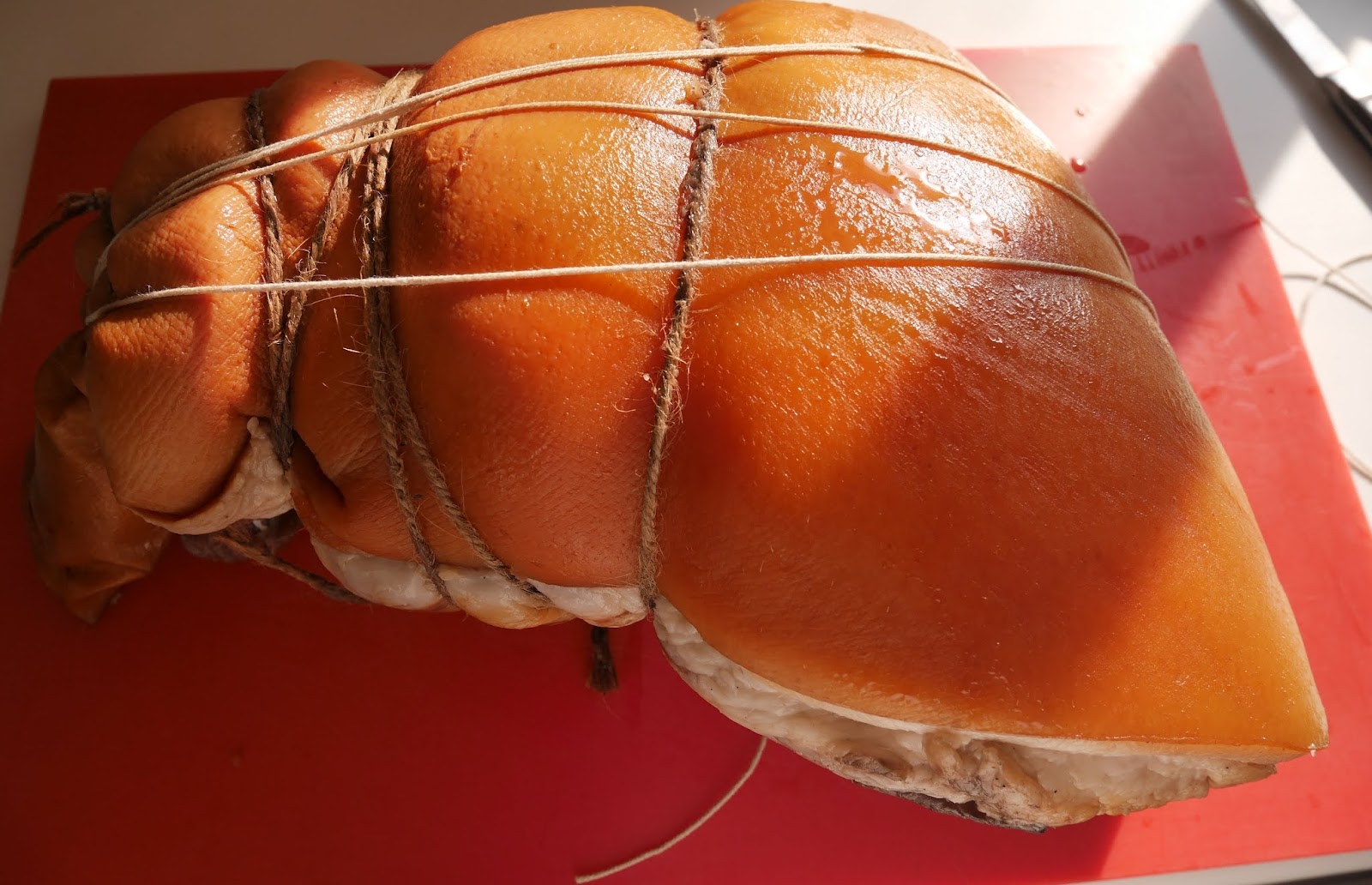 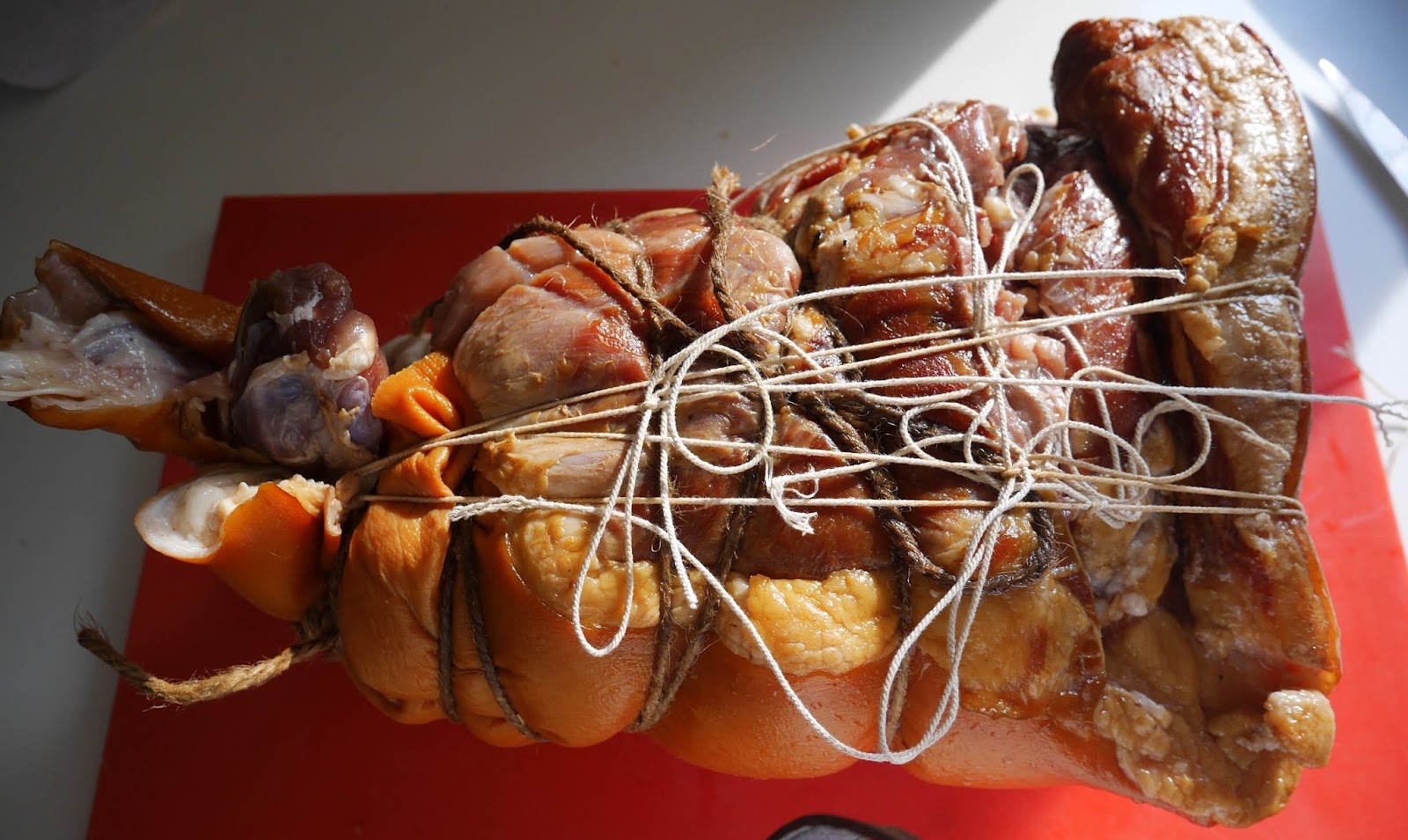 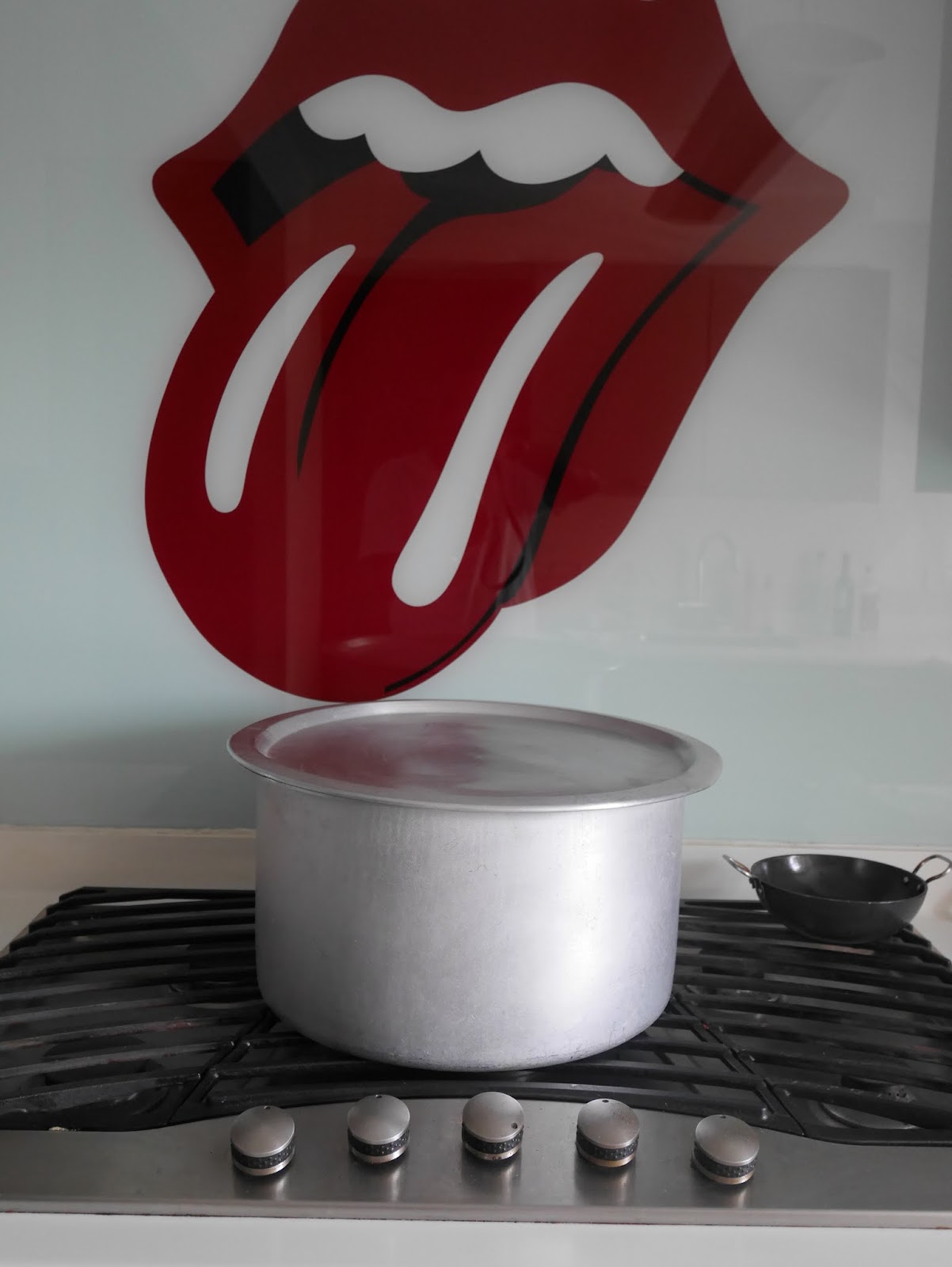 Saturday morning, the day of the party, I pulled out the large aluminum ham `pateli’ we bought years ago just to cook a ham, washed it and set it on the gas. Water, cloves, bay leaves, star anise and some peppercorns went in and finally the ham. Instead of water you could use beer or apple concentrate. Beer has become so expensive and apple concentrate is difficult to get. Earlier we got it from the Himachal Pradesh Emporium at World Trade Centre at Colaba. Water works just fine. Cover and put to boil. Once the pot comes to a boil you simmer it for an hour per two kilos or half an hour for a kilo turning the ham after every hour or so. Once done you pull it out of the water. By now the ham is fully cooked and ready to eat. 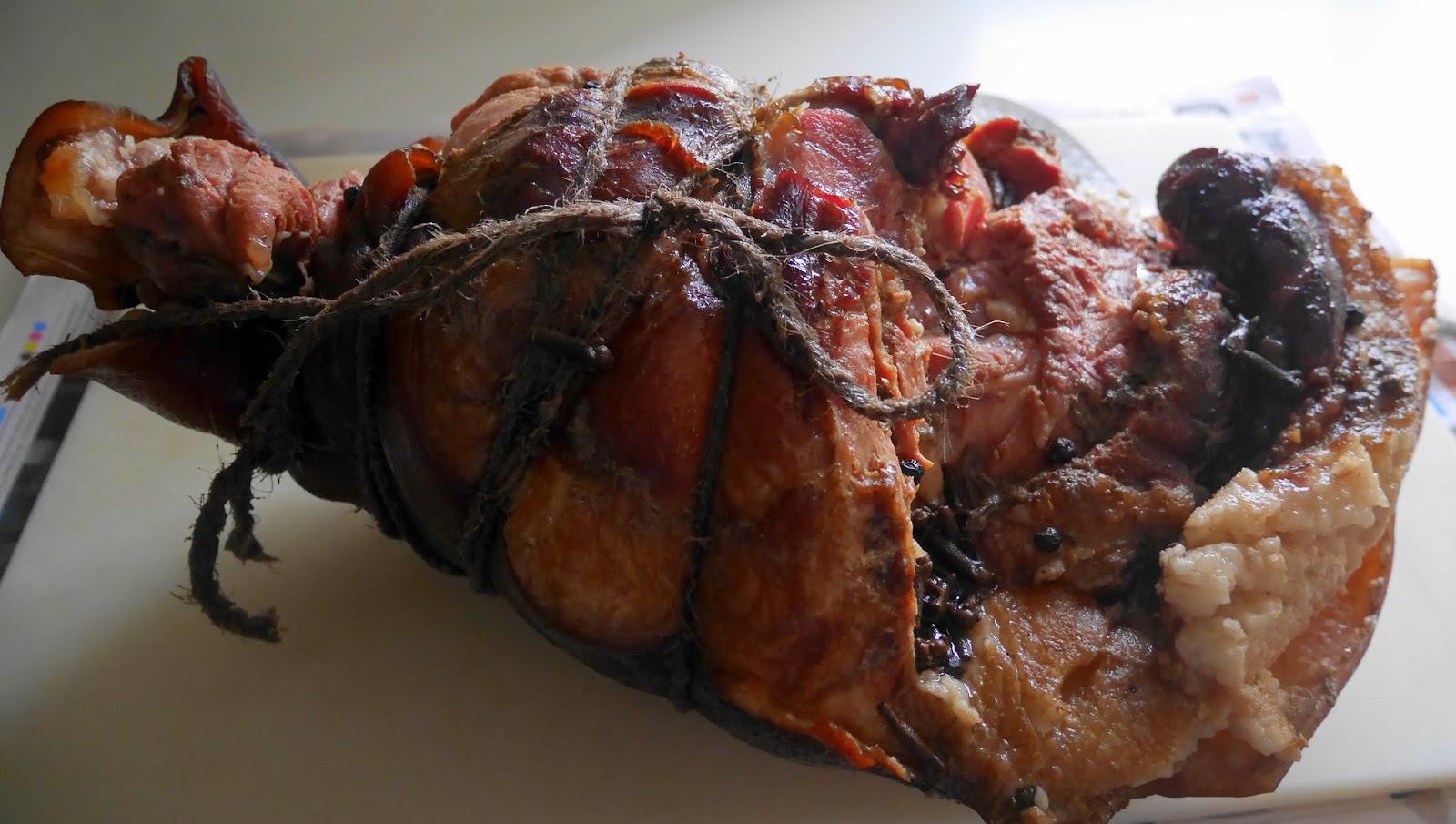 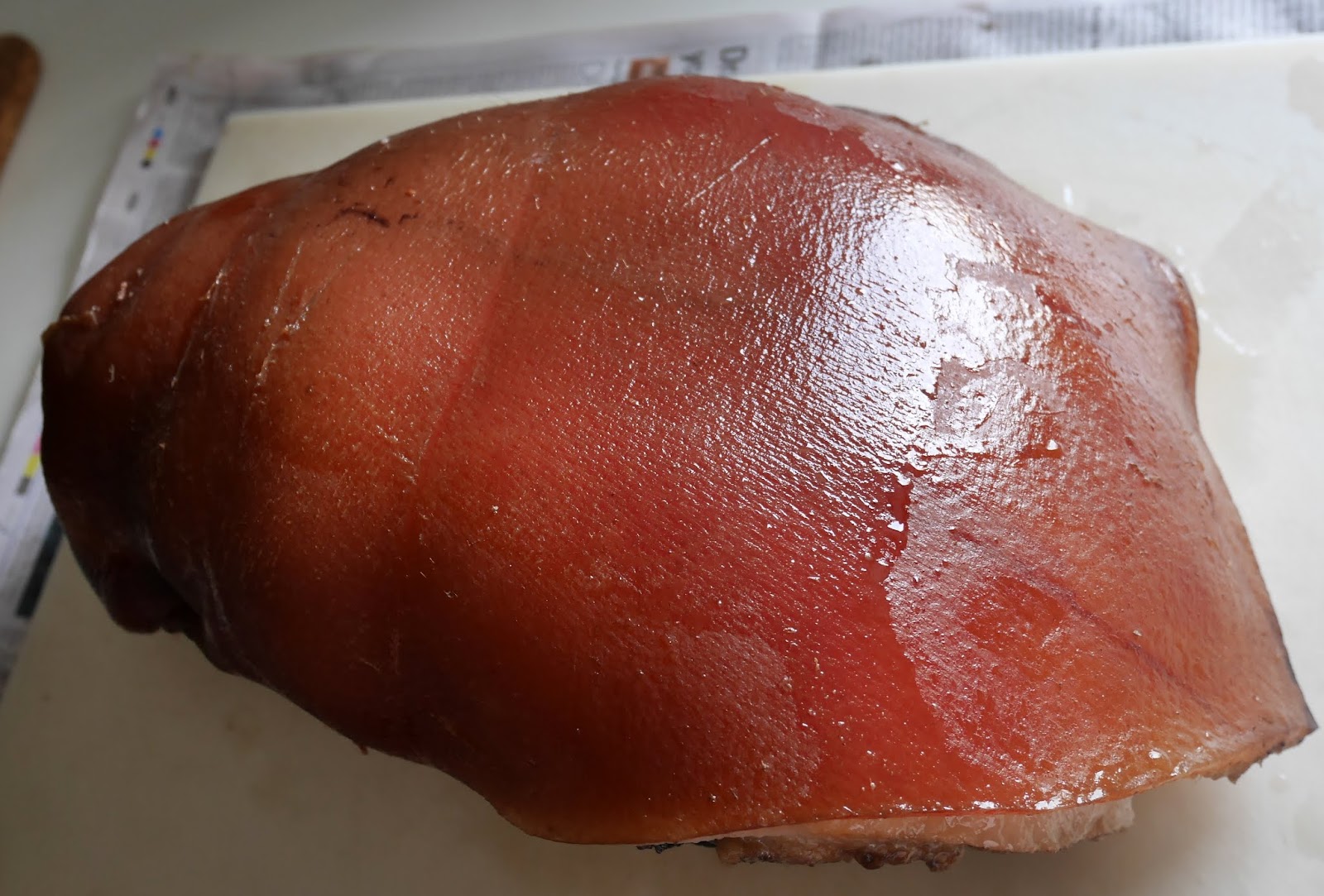 Then, it is time to prepare the ham for the next stage, baking and glazing. To do this you first take of the skin. This is simple; the skin comes off quite easily. The tip of a knife helps the parts that are stubborn. Once the skin is off, you score the fat in a diamond pattern and stud each diamond with a clove. 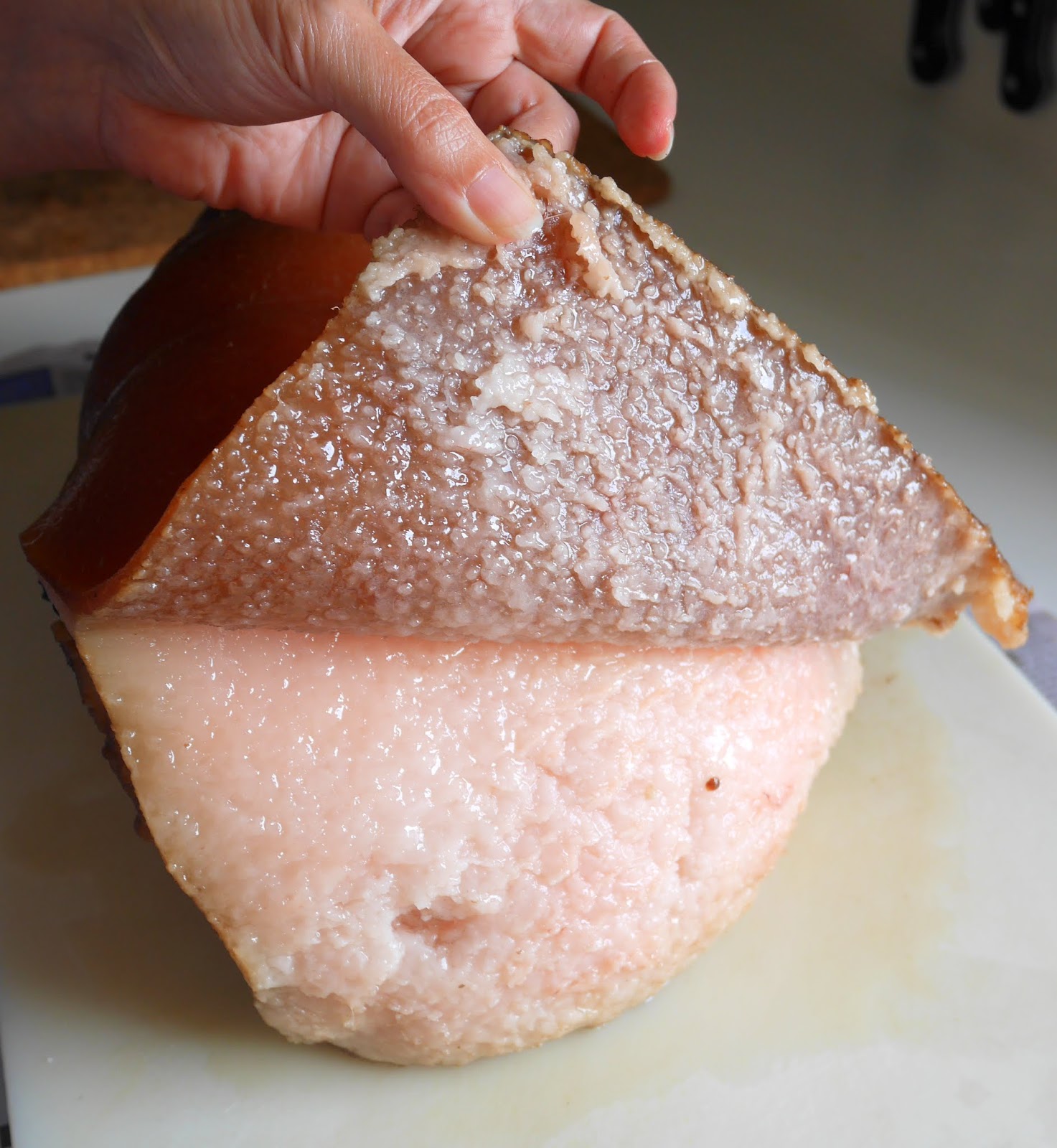 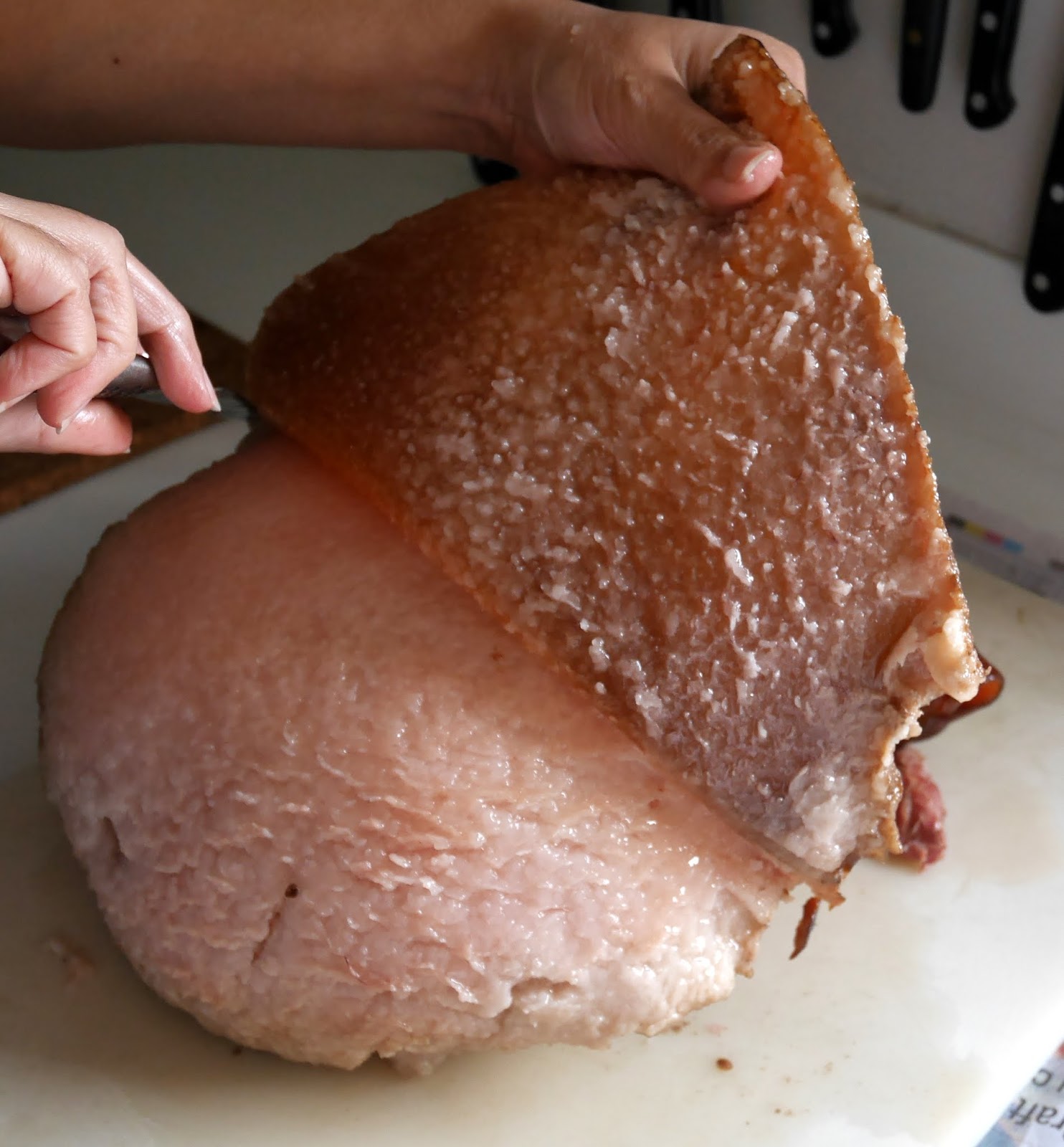 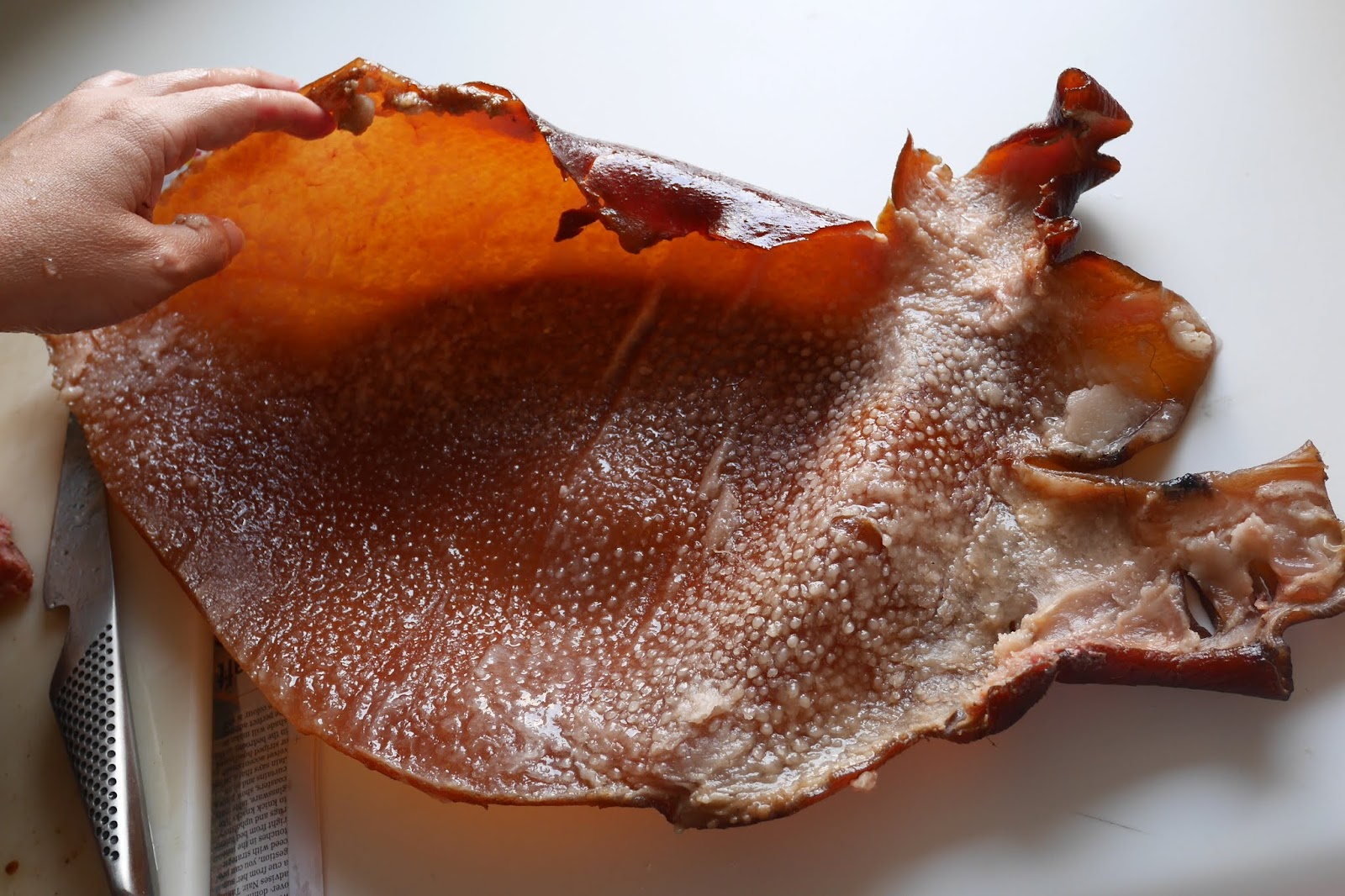 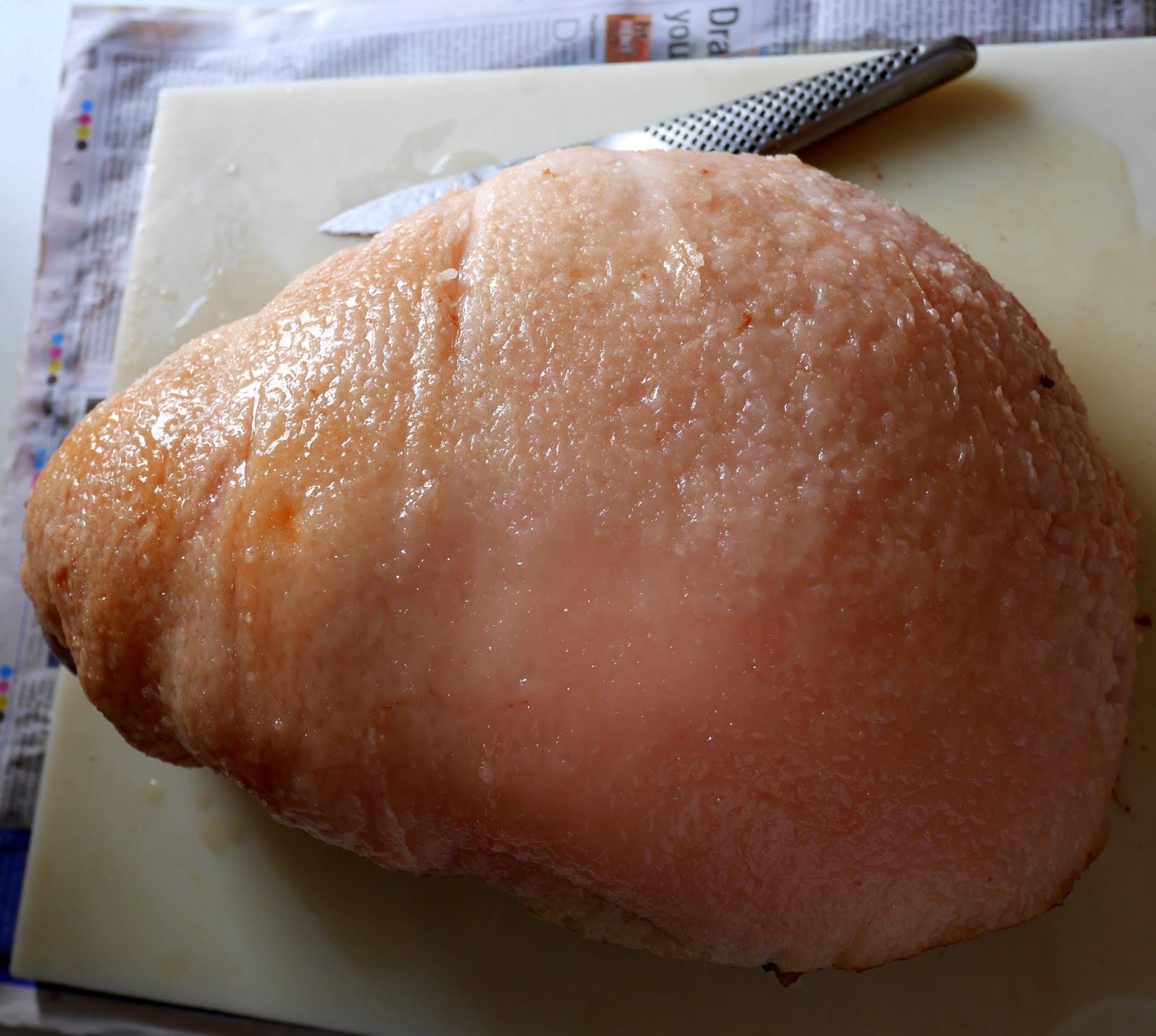 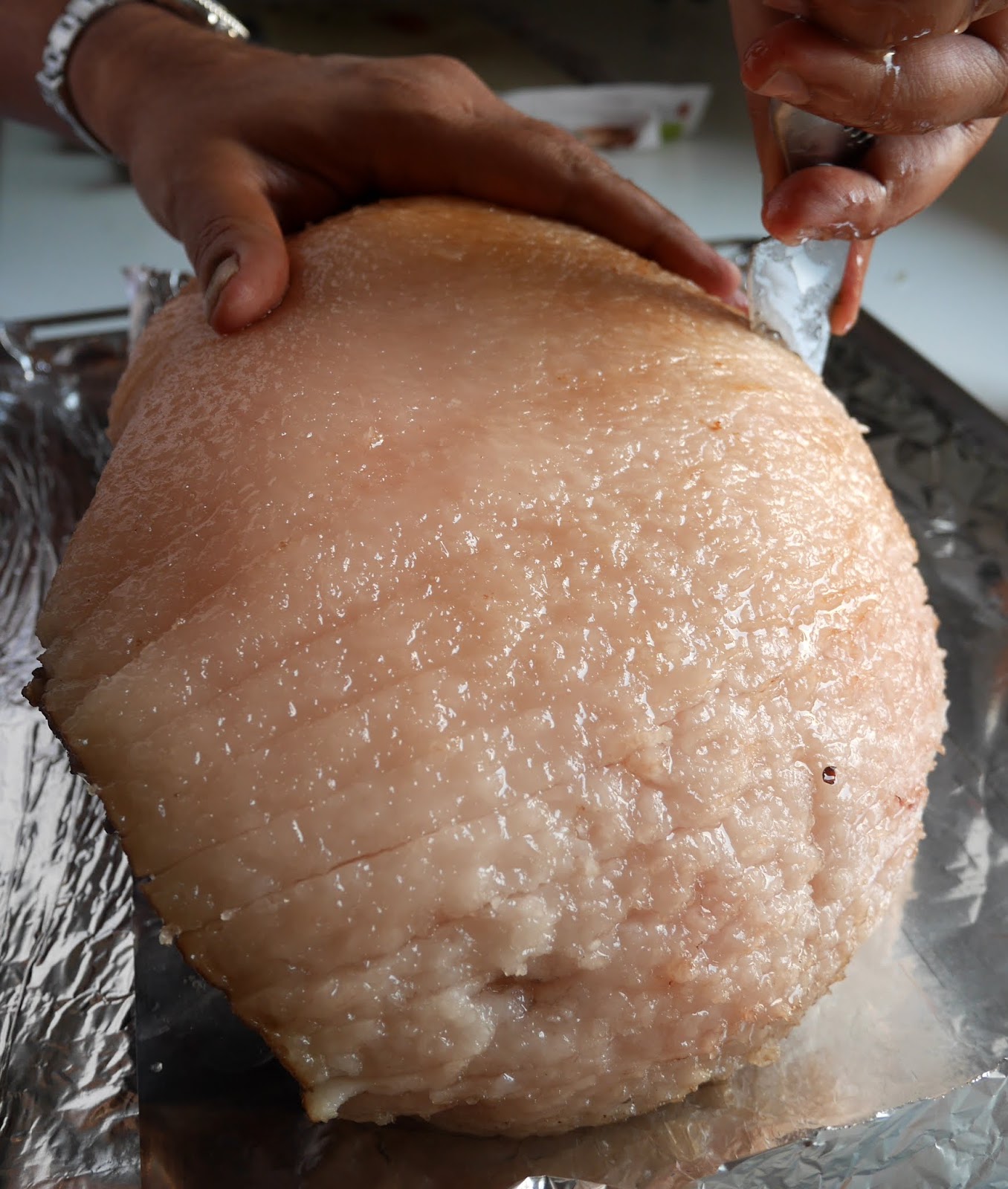 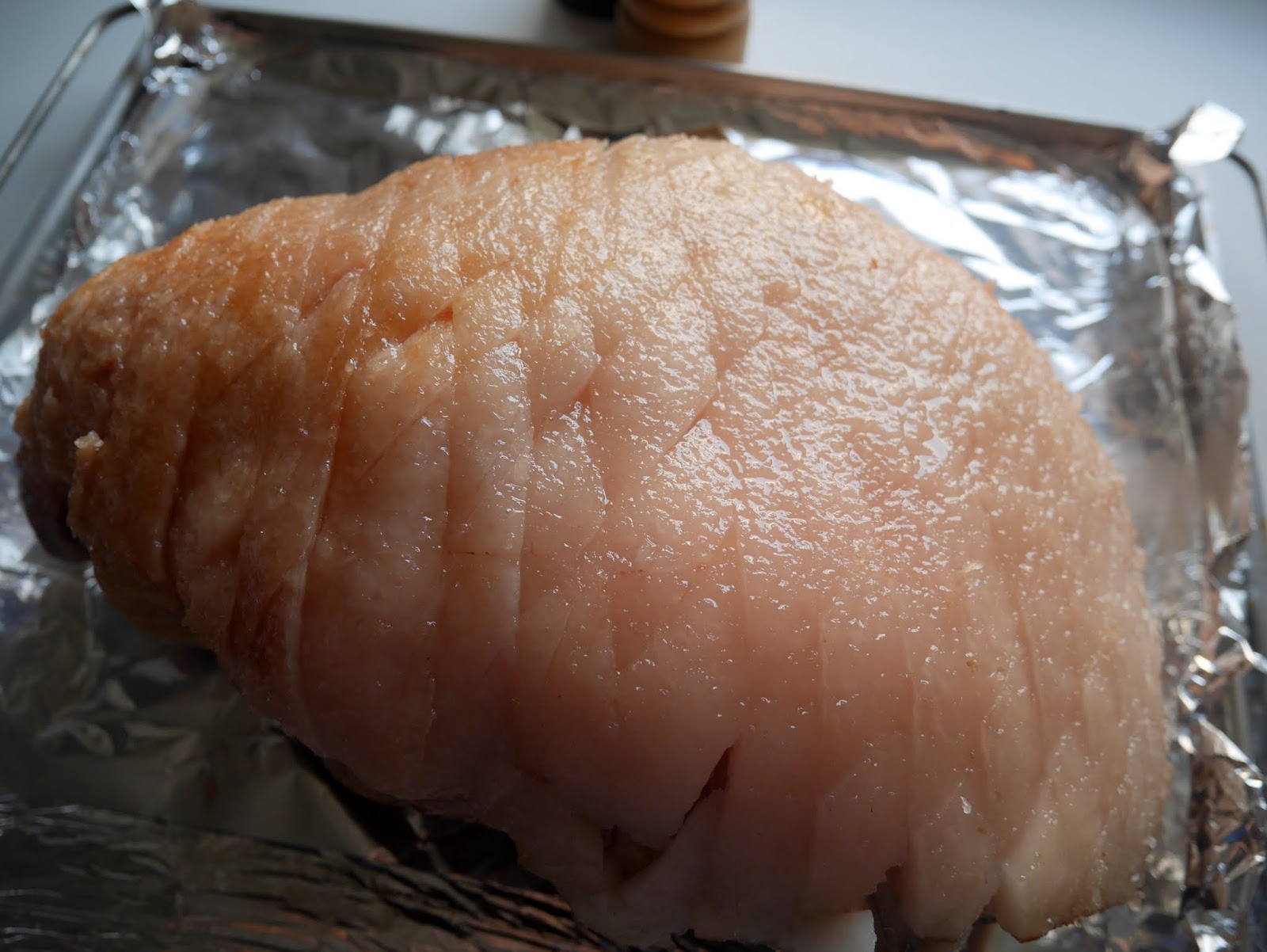 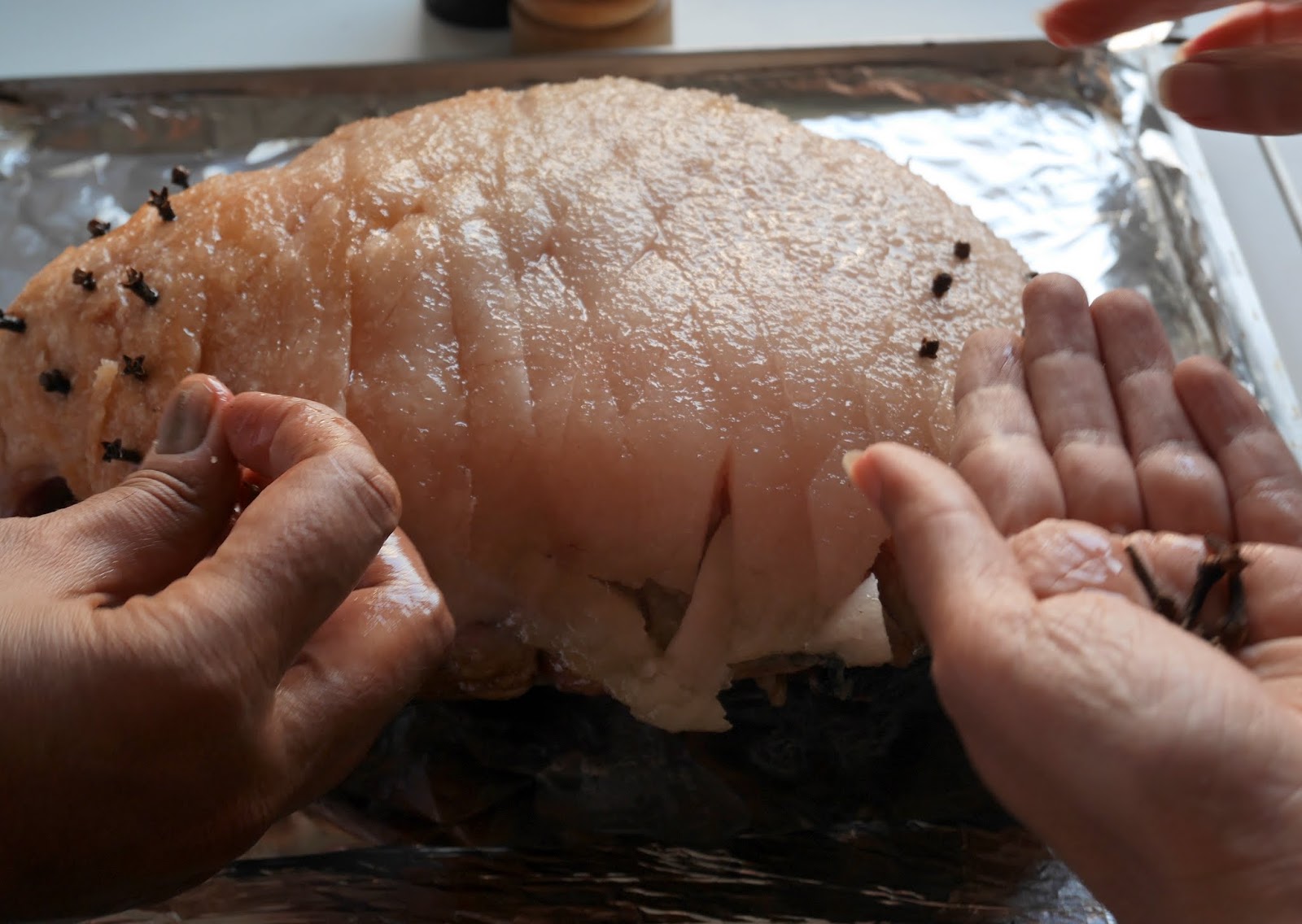 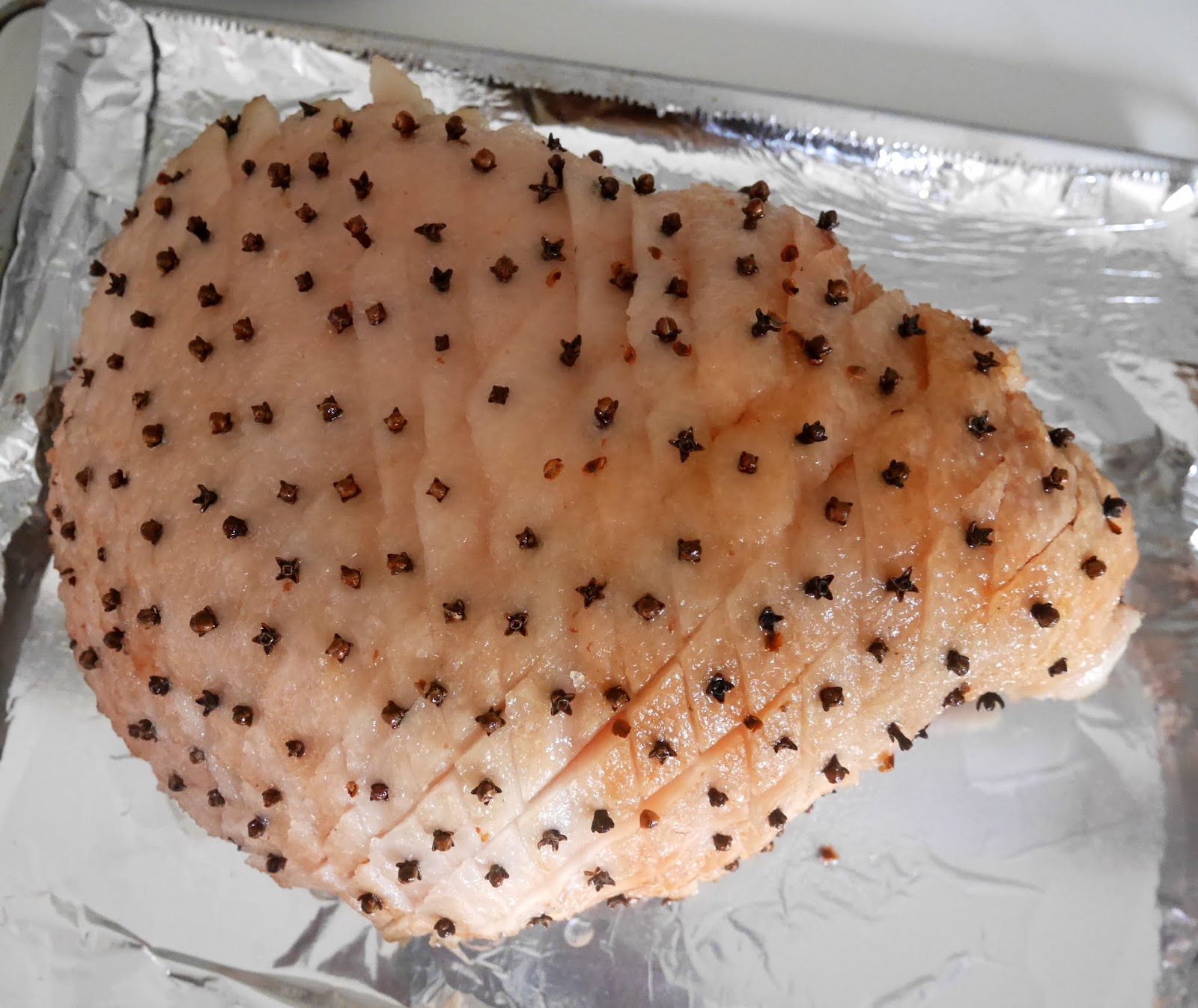 The glaze we made was Port wine, honey, brown sugar and a dash of vinegar. You could simply use sugar and smear it on the fat. Choice is yours. You pour on half the glaze and put the ham into an oven pre heated to 180C for about an hour. Every 15 minutes you baste the ham. After 30 minutes you pour on the rest of the glaze. An hour later you have a beauty. 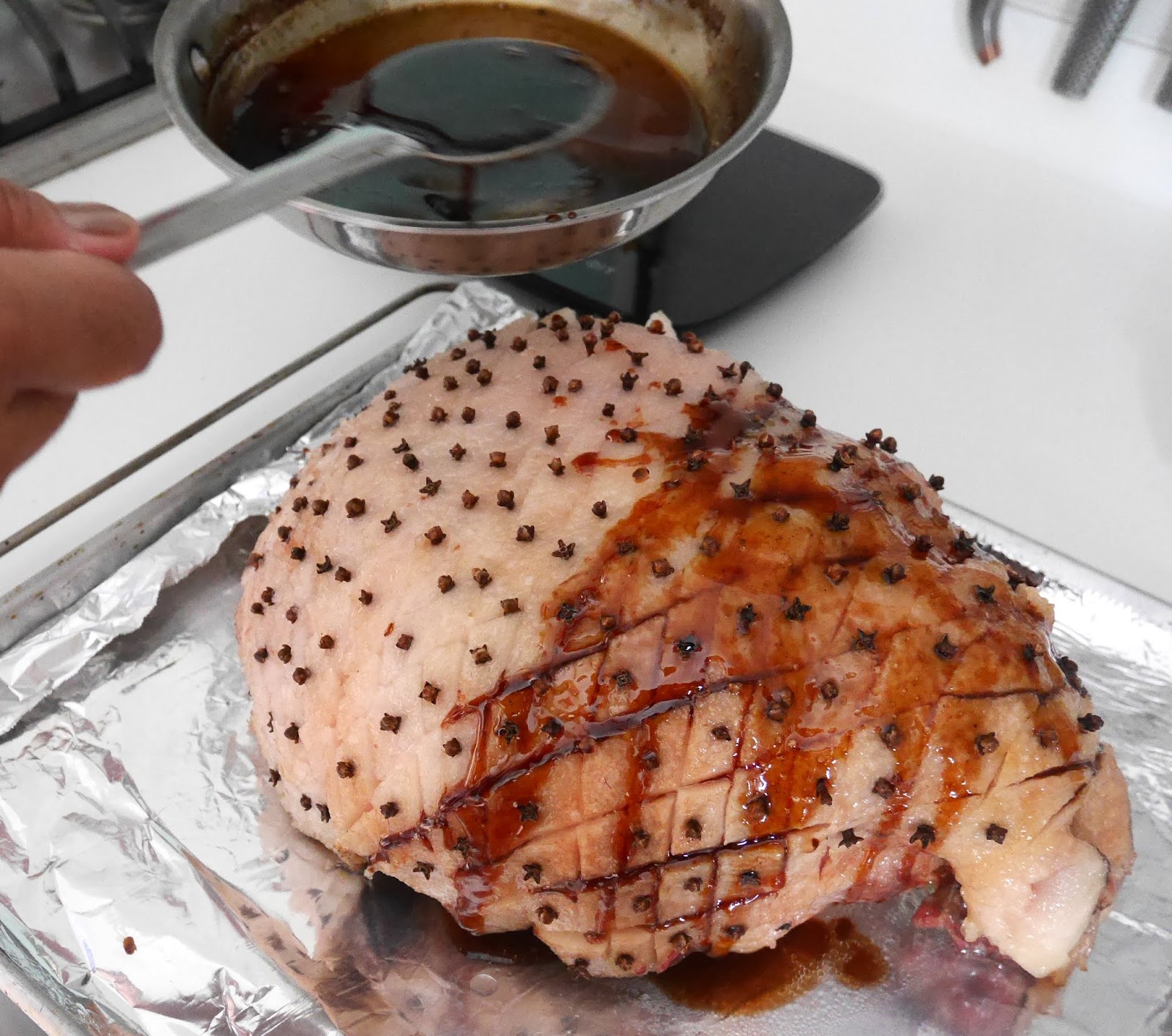 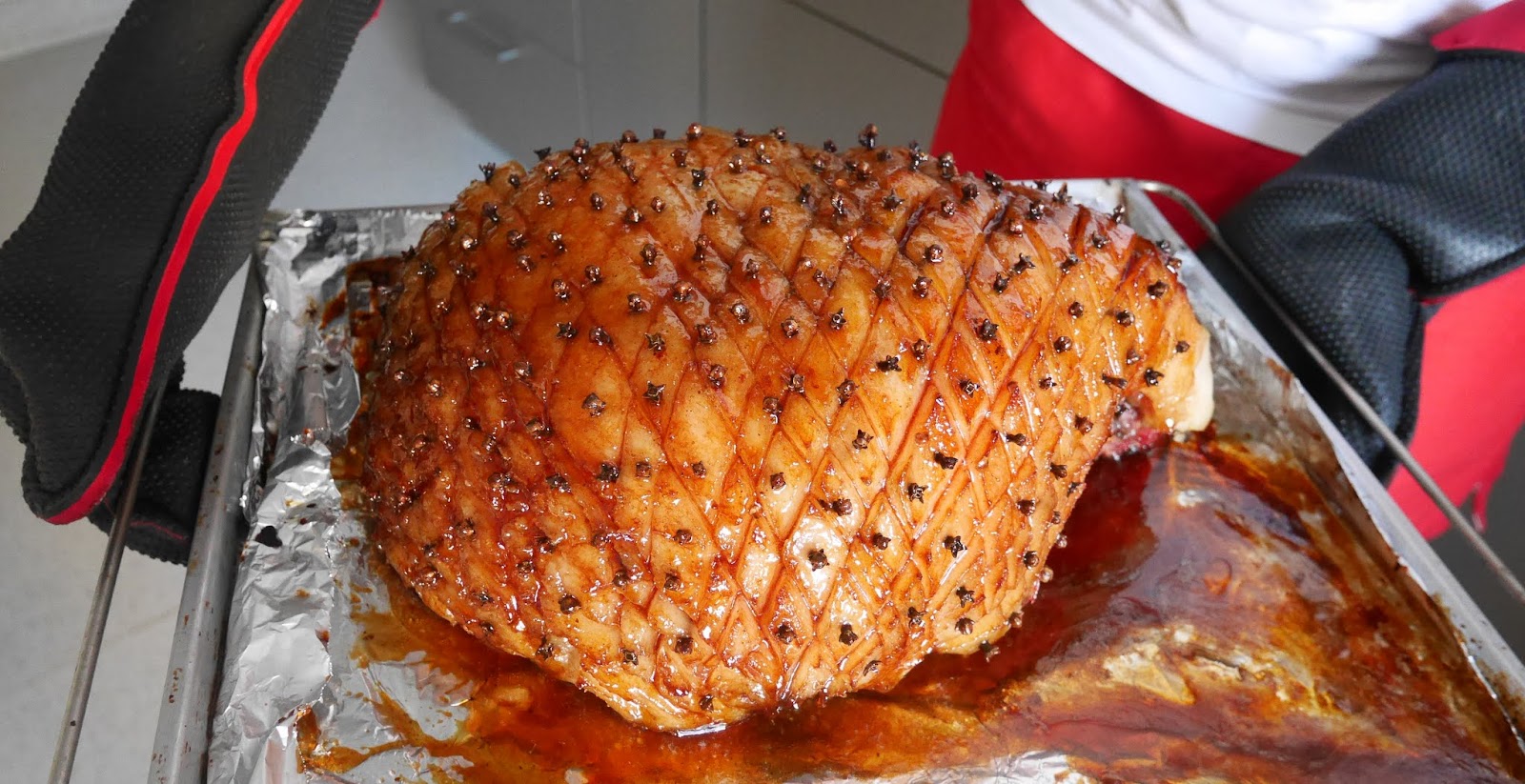 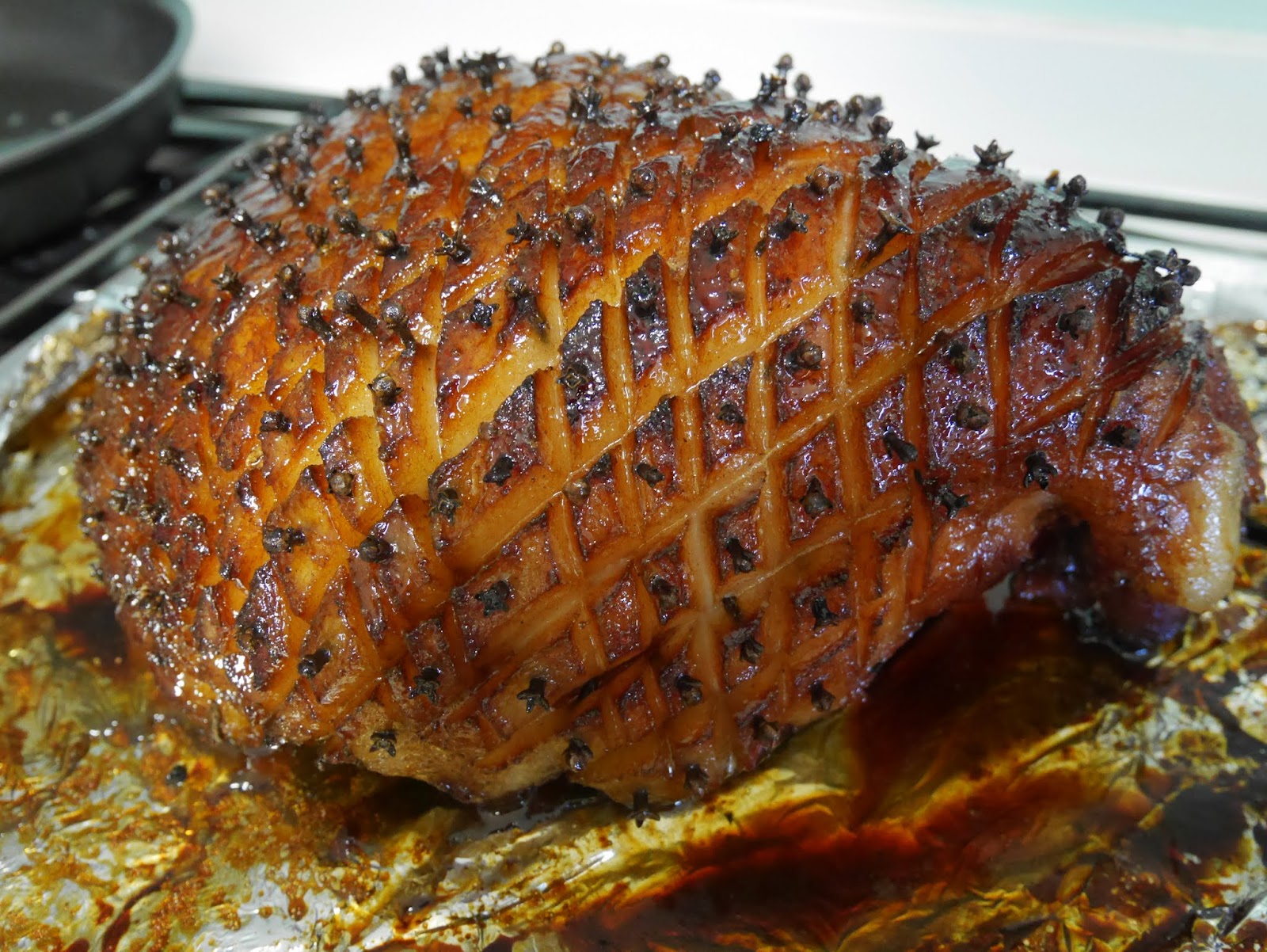 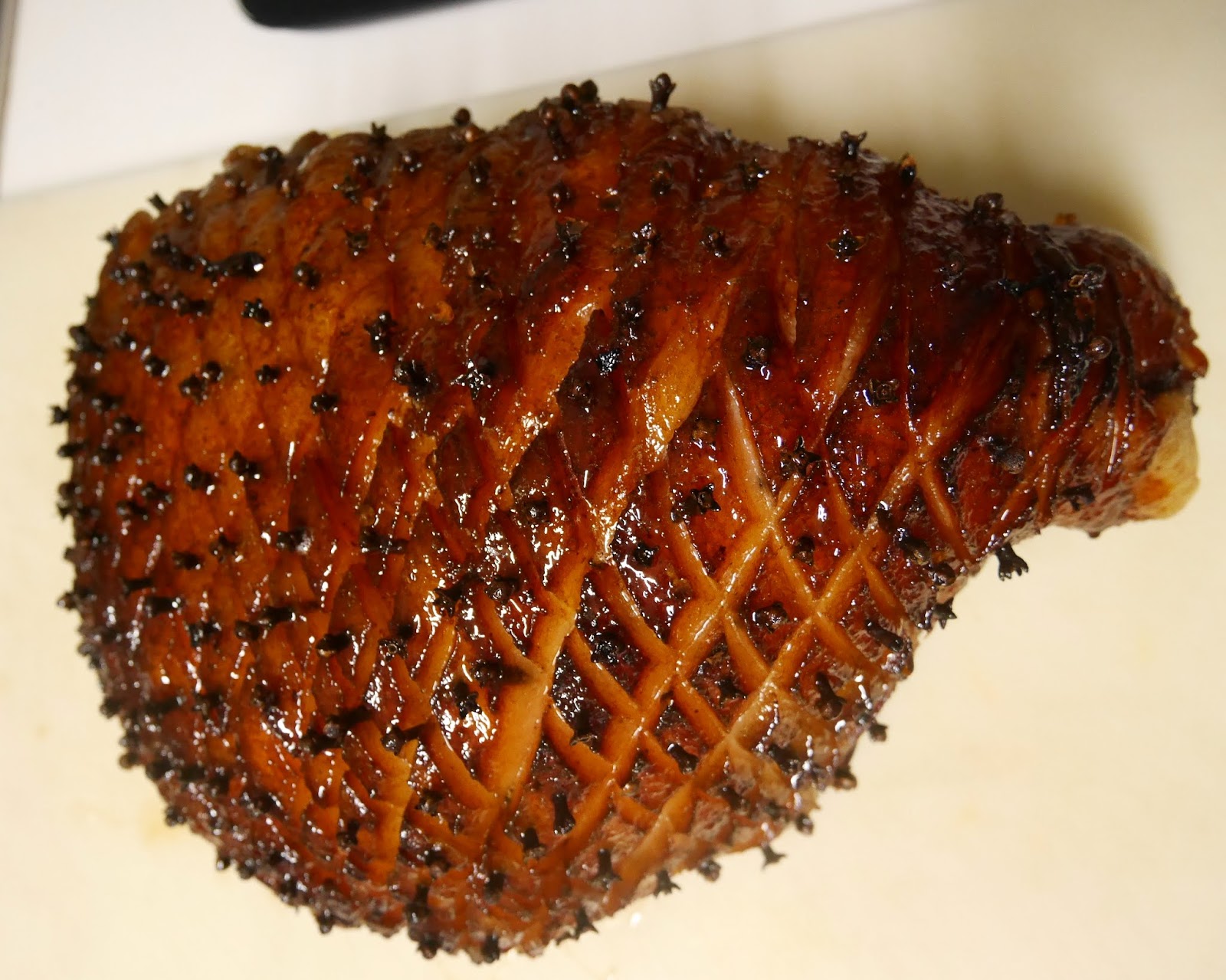 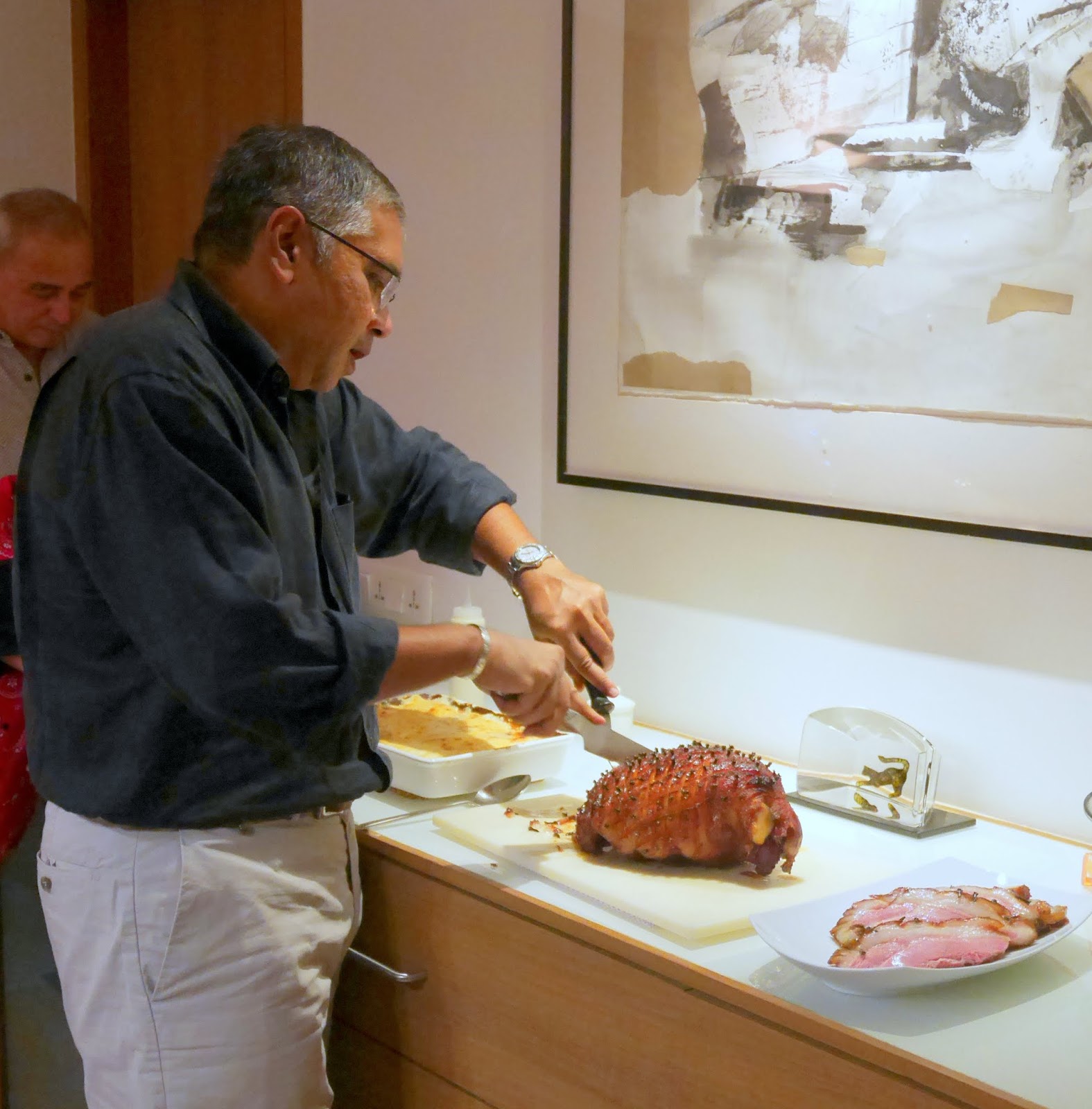 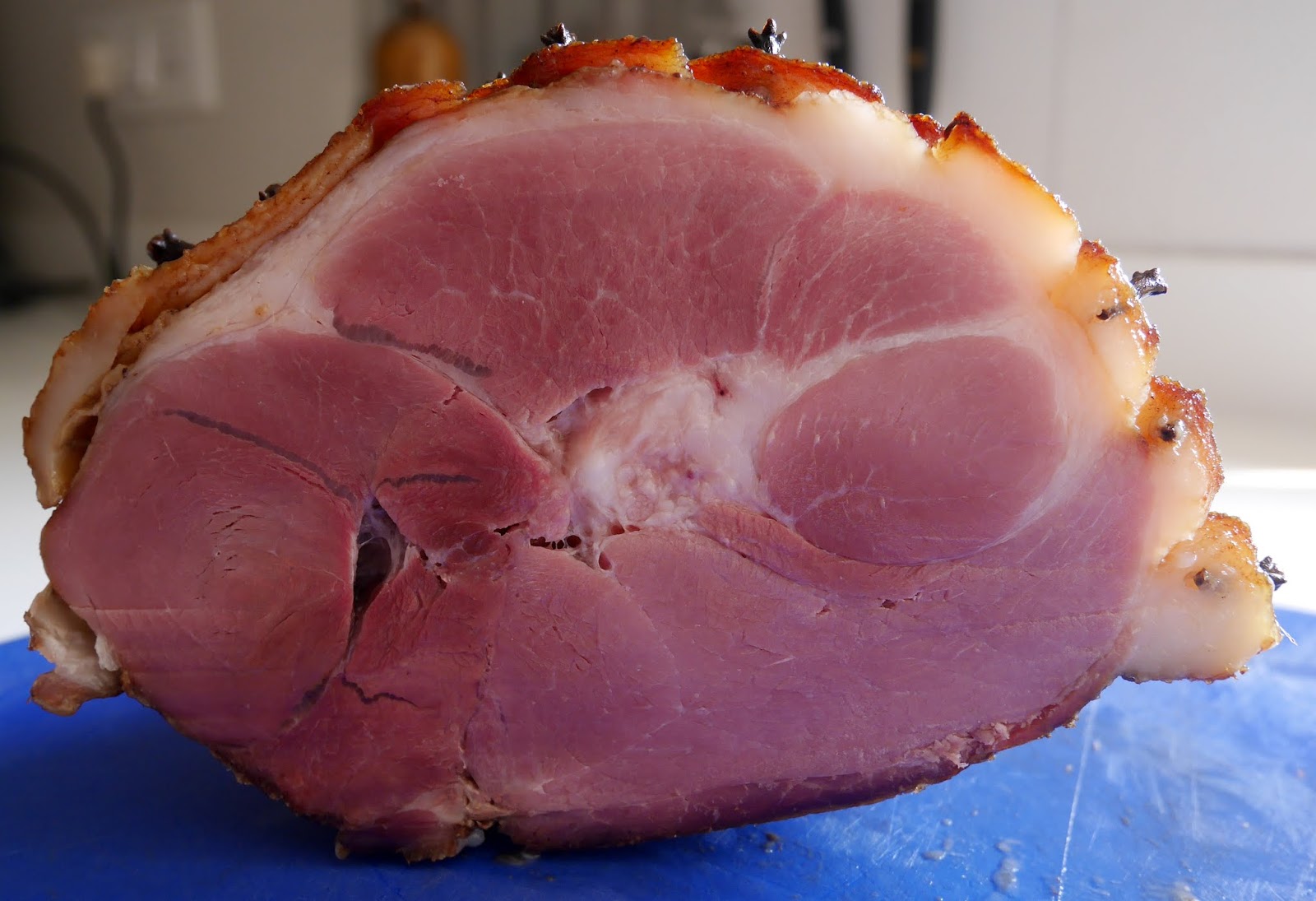 Posted by Stonethrowers Rants at 6:32 PM