As I have written earlier, we had been gifted a cooking class in Goa.

The class is conducted by Judy Cardozo. She is part cooking instructor, part food consultant and part caterer. She conducts these classes professionally for visiting foreigners who want to learn to cook `Indian’ food. Typically, the course runs for 3 or 5 days. These have one day visiting the fish market/local market and one day at a spice village. Three days are spent teaching them cooking. Of course `Indian’ food is a term that has no real meaning. Judy told us that `Indian’ food that she teaches invariably has as its dishes – Chicken Tikka, Tadka Daal, Gajar Ka Halwa, Sofiana Biryani and South Indian Pepper Chicken. A sort of top 10 of India’s favourite dishes. We had absolutely no intention of learning any of this. So, we asked that we should be taught: 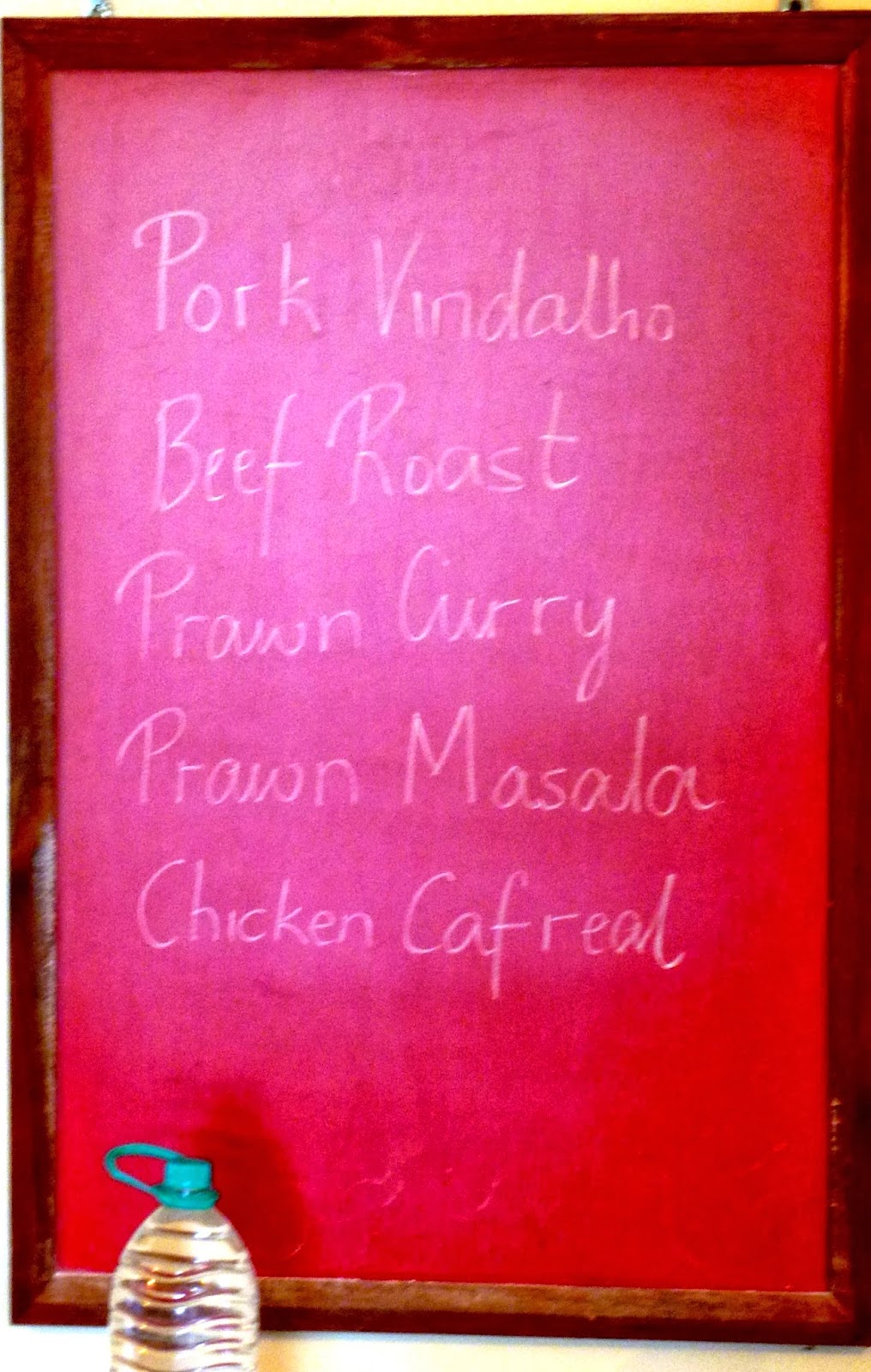 These dishes are not part of Hindu Goan food [except the Prawn Curry] but have their origins and influences in the Portuguese and Catholic history that Goa has. This food uses Vinegar as a souring agent, which no good Hindu would use. The Vinegar, and the liberal use of chilli both green and the dried red chilli, characterise this food. To this is added a blend of Garam Masala – Clove, Cardamom, Pepper and Cinnamon resulting in a unique taste. The Prawn Curry is recognisable. It tastes somewhat like the Manglorean Ghassi and the Malwani fish curries in as much as coconut is the main ingredient and the sour element is Tamarind. Of course, in the Hindu fish curry whether Goan, Manglorean or Malwani, the souring agent could also be Raw Mango, Kokum or Bimbli.

Judy told us that Chicken Cafreal is a dish that has its origins in Africa, the Portuguese colonies Angola and Mozambique. The Peri Peri Chilli with which Cafreal was made came from Africa. Cafreal masala or paste is now made with non spicy green chilli, lime juice, Cardamom, Pepper and Cumin. The paste is not really green, however nowadays the Coriander and Mint which is often added when making the Cafreal paste is an aberration. The Portuguese did not know Coriander and Mint, they did not use it. She dismissed Sanjeev Kapoors version of Cafreal with Coriander and Mint. The chicken was coated with the paste, cooked on charcoal and basted with coconut milk. This was a dish that was created by the slaves that the Portuguese brought to Goa from the colonies.

Vindaloo is a localised Portuguese dish with Pork – never ever Chicken or Mutton – always pork, lashings of Vinegar typically local Toddy Vinegar and Garlic all cooked in a Red Chilli and Garam Masala paste. This dish has now a reputation of being extremely spicy and has potato added. All this is incorrect. The dish is spicy, but, is a balance between the hot and the sour. Potato is not added, the `aloo’ in Vindaloo is not potato but garlic.

Recheado is also a Red Chilli based paste, however, this is quite different to the Vindaloo paste. Recheado masala is also used when making fish. It is smeared on fish which is then pan fried.

The Roast Beef was quite unlike what Western or English Roast beef is. The beef was marinated and then cooked in a pressure cooker. The result was surprisingly good. It reminded me of school, when my classmates used to get Roast Beef sandwiches for `dry lunch’.

The classes were conducted in a beautiful old bungalow on the banks of the Mandovi River. Boats went by and you looked out onto a garden. The session started at 9.30. The plan was to cook all 5 things and then have them for lunch. Judy handed out recipes and generally hovered and supervised. We set about making the pastes or masala. The Recheado, the Cafreal and the Vindaloo. The Pork was put to cook, the Cafreal applied on the chicken and left to marinade. Likewise for the Roast beef. 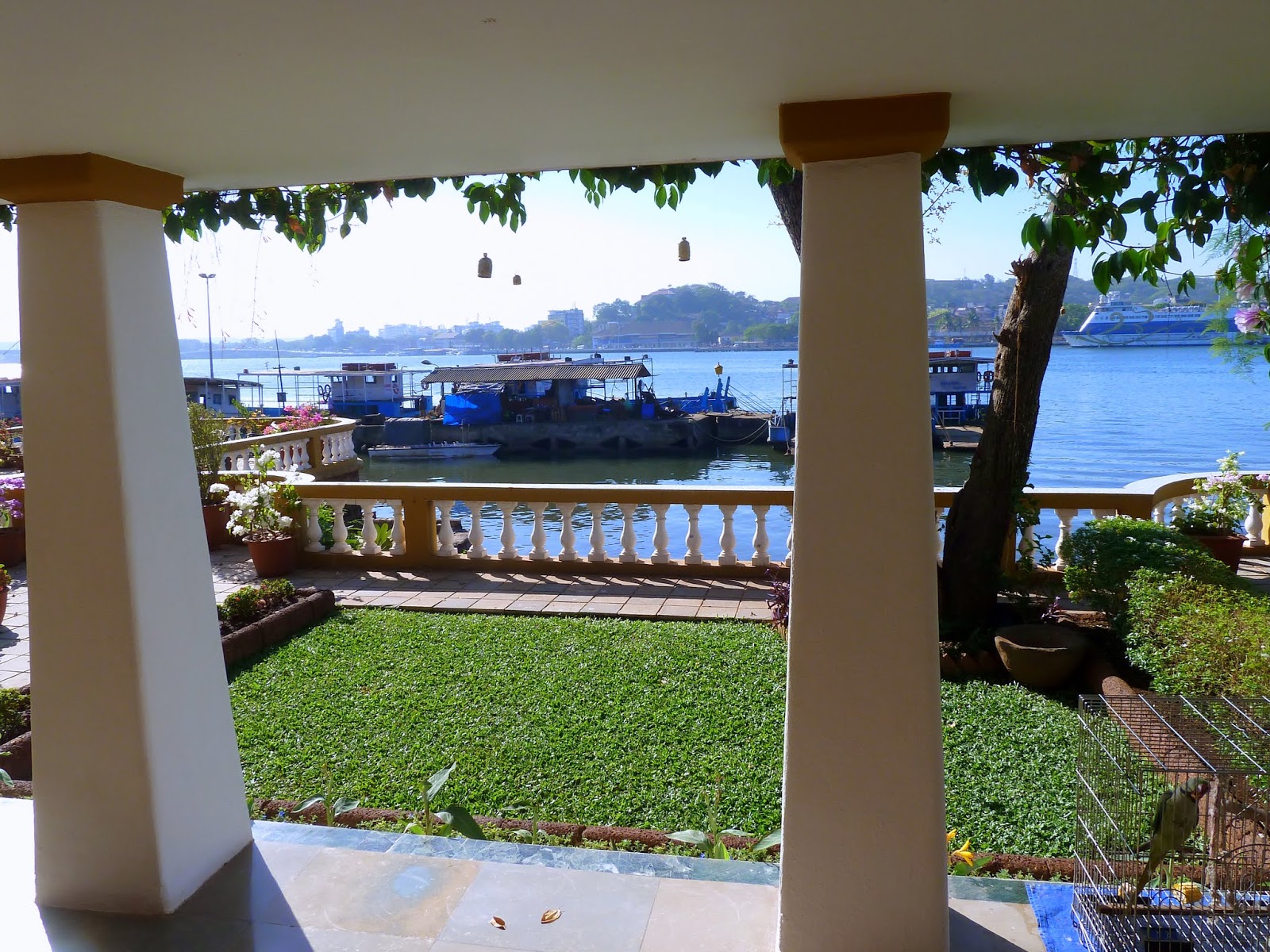 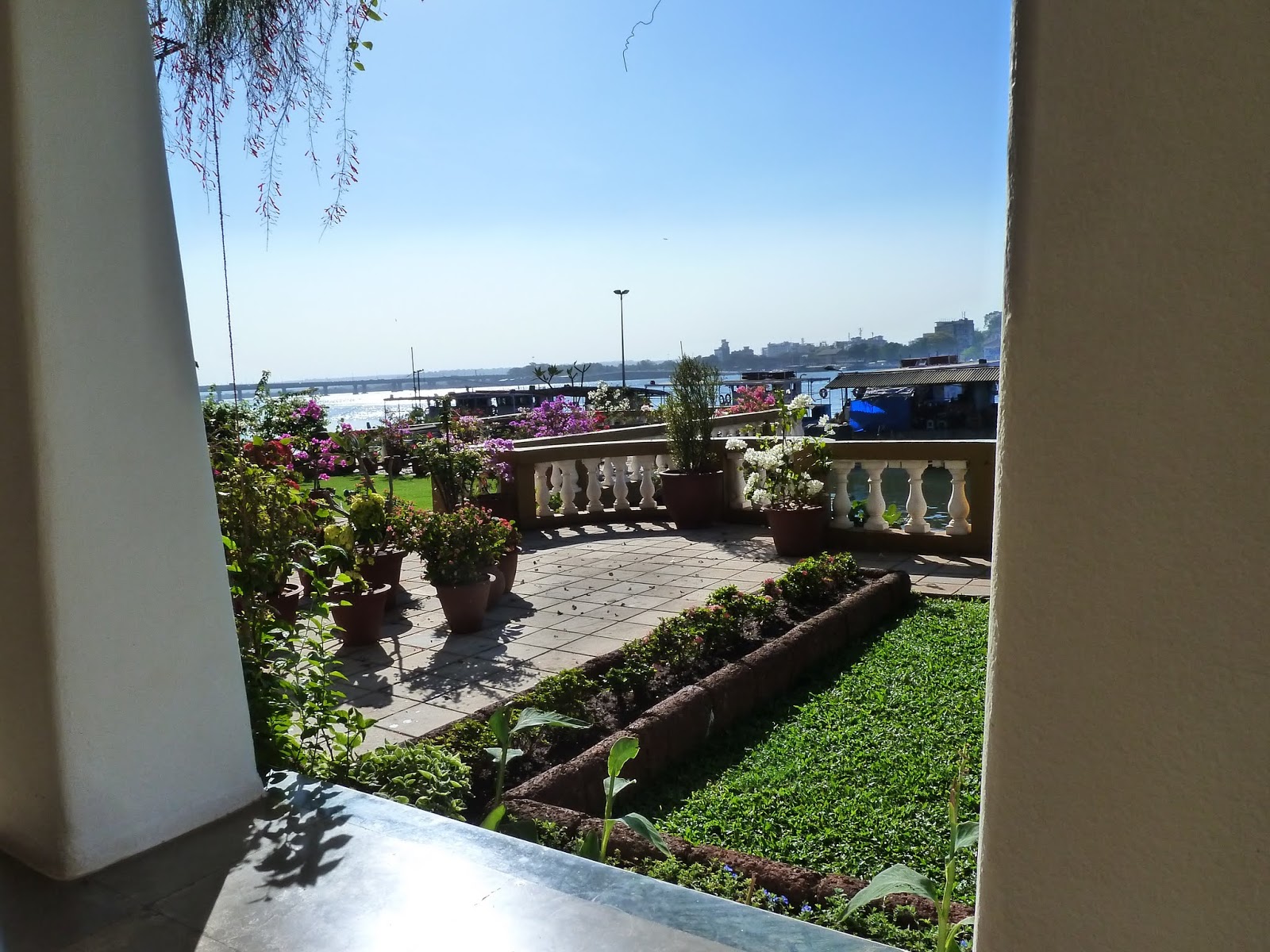 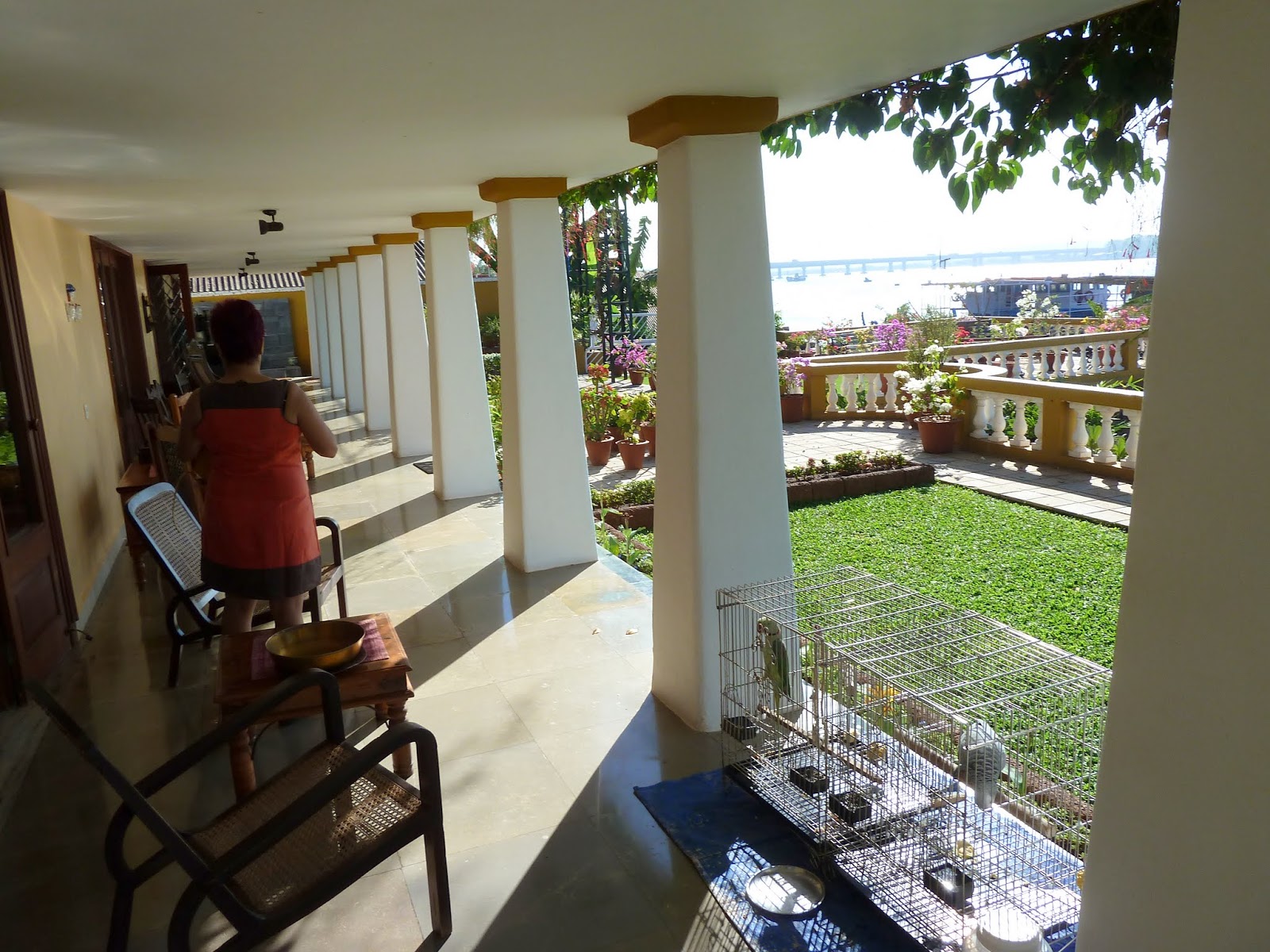 Then it was time to make the Prawn Curry. So we set about extracting the Coconut Milk, first thick milk then the second thinner milk. I remembered when I was little I used to extract coconut milk at home. Grate the coconut, add hot water, blitz it in the Mixie, and, with my small hands and miniscule strength try and squeeze out the milk. After playing about for a bit, I used to get tired and bored at which point the servant took charge and with his mighty hands squeezed out the milk. 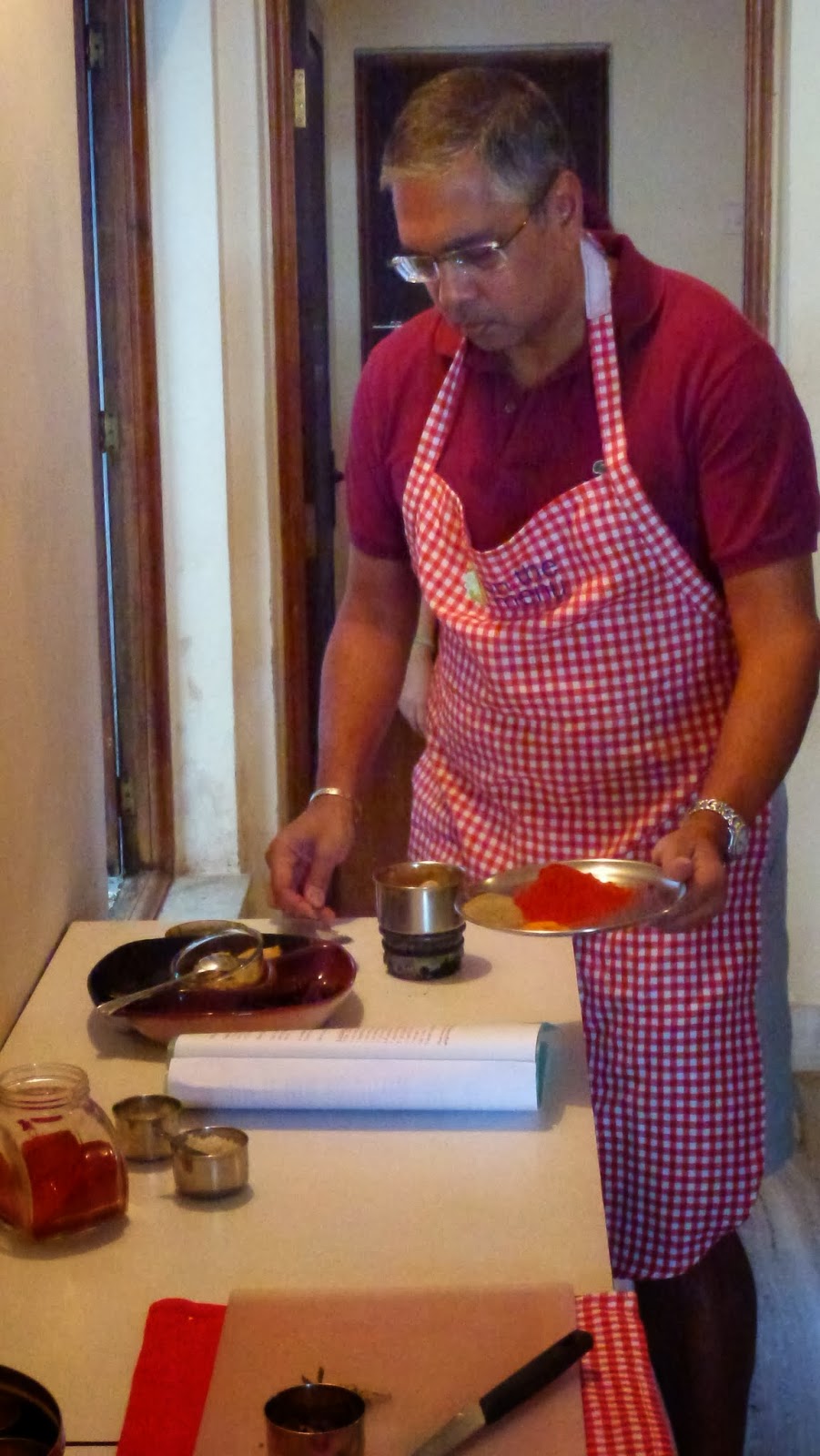 Then we set about cooking things. First the Prawn Curry was put on a low flame with continuous stirring. This was to prevent the milk from splitting. By this time the Vindaloo was almost done. The Chicken Cafreal was put on one pan. The Recheado masala was cooked separately from the prawns. After that, the prawns were lightly cooked they were added to the Recheado. The Beef was browned in a pressure cooker and then pressure cooked. A little rice was made and all was plated.


We served ourselves and had a most pleasurable meal out in the balcony.

In all honesty I was most pleasantly surprised as to how good the food turned out. Mind you we were eating everything just off the flame. Things like Vindaloo and Prawn Curry have to mature and are normally eaten a day or two after making them. This would make them taste much better with deeper mellower flavours.

Unfortunately, I do not have too many photos. Two of Judy’s students, a delightful older English couple popped in to absorb the cooking session. Barry took some photos with his camera and he has promised to send them to me. I will upload them no sooner I get them.

We came away most satisfied. It was a morning very well spent. We learnt, we had fun learning and what we learnt will stand us in good stead. Lots of good meals coming up.

If any of you want to learn Goan food, I recommend Judy very strongly.

Posted by Stonethrowers Rants at 3:54 PM