The good news first. Readers will know that I believe that there is no, I repeat, no, Indian wine that is worth drinking. At best you could drink a glass, but beyond that it gets pretty undrinkable. Well, I have news for you. Moet Chandon the great Champagne House has developed two sparkling wines in India for India. They sell them under the brand name Chandon. We have been drinking bottles and bottles of the White Chandon, or, correctly, Chandon Brut, and, it is damn good. It costs Rs 1200/- per bottle for the white. This is the MRP. At Shah Wines you get a bottle at Rs 1000/- I have not tried the Pink Chandon or Chandon Brut Rose which is Rs 200/- more expensive, but I would assume it is also good.

This is by far the best wine we have in India. Please do buy it, super chill it, get rid of kids and other distractions, sit down with your better half and drink this stuff. I promise you it is excellent, world class. 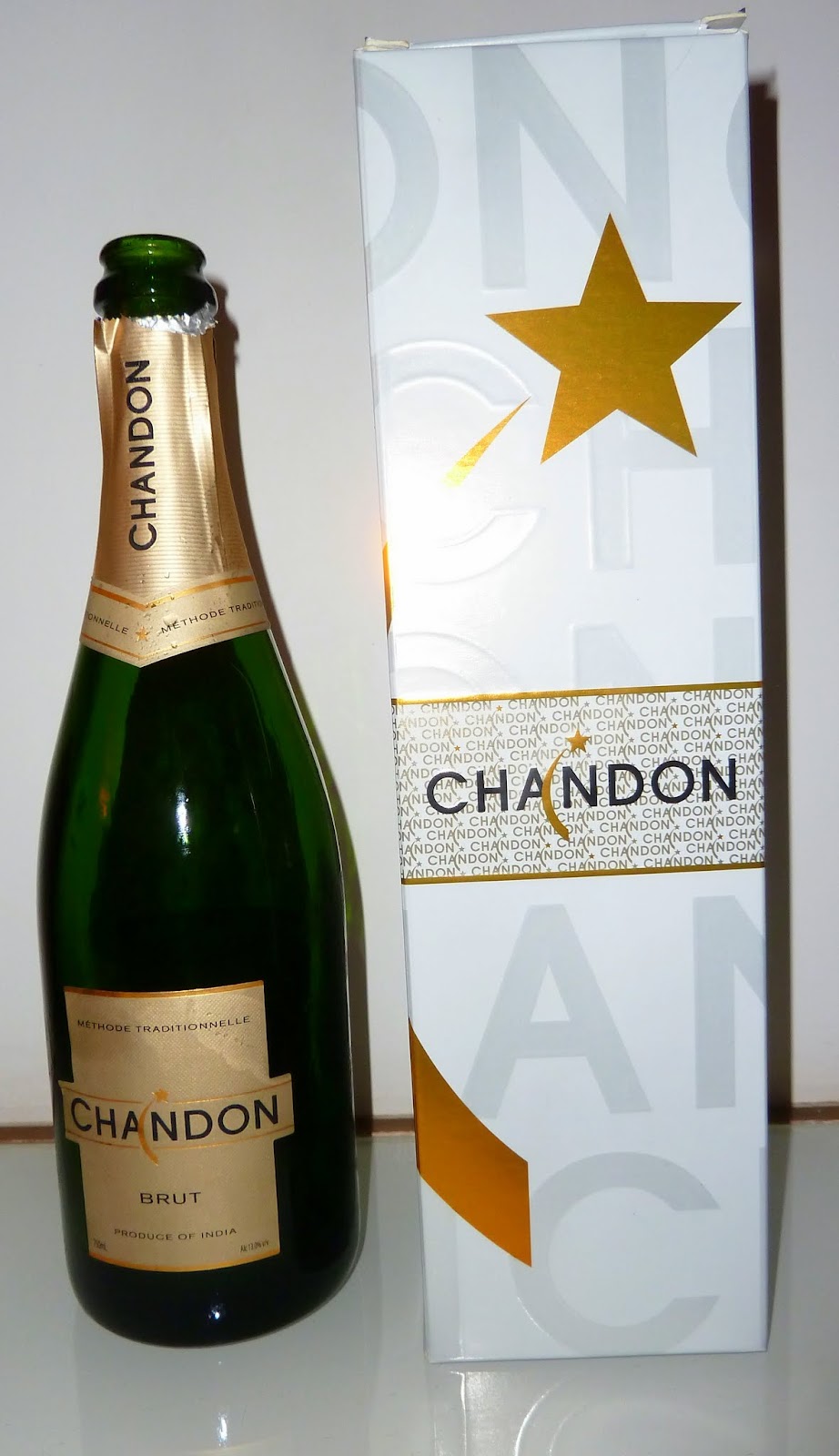 Now the bad news. I must confess that no one is to blame but me.

We were invited for lunch to Pizza Metro Pizza. I was reluctant to go as I cannot bear the thought of spending 2 hours for lunch. Also, a factor to be considered was being a Pizza restaurant I was sure there would be lots of noisy children, their cackling mothers and the obligatory Ayahs/maids. This is not my idea of fun. However, I was weak, I was persuaded, I was miserable.

Pizza Metro Pizza is in the same location as Club IX, the onetime competitor to Toto’s Garage. It was at the wrong end of Pali Hill right next to Barbeque Nation. The decor was odd though pleasant enough. I did not know if I was in Naples or in Mexico. Pizza Metro Pizza calls itself an authentic Neapolitan restaurant. Pizza originated in Naples. The speciality of Pizza Metro Pizza is that they offer you a one meter long pizza. This means that you get four 12 inch pizzas. Our host was most excited with this prospect [there were 4 of us so we could each order one flavour]. I was sceptical on how 4 people could each eat a 12 inch pizza but I decided to keep my mouth shut. Also, I thought how utterly gimmicky this was. By changing 4 round pizzas in one large rectangular one, how would it be any better or any different? But then, I am accused of being a cynical bastard! 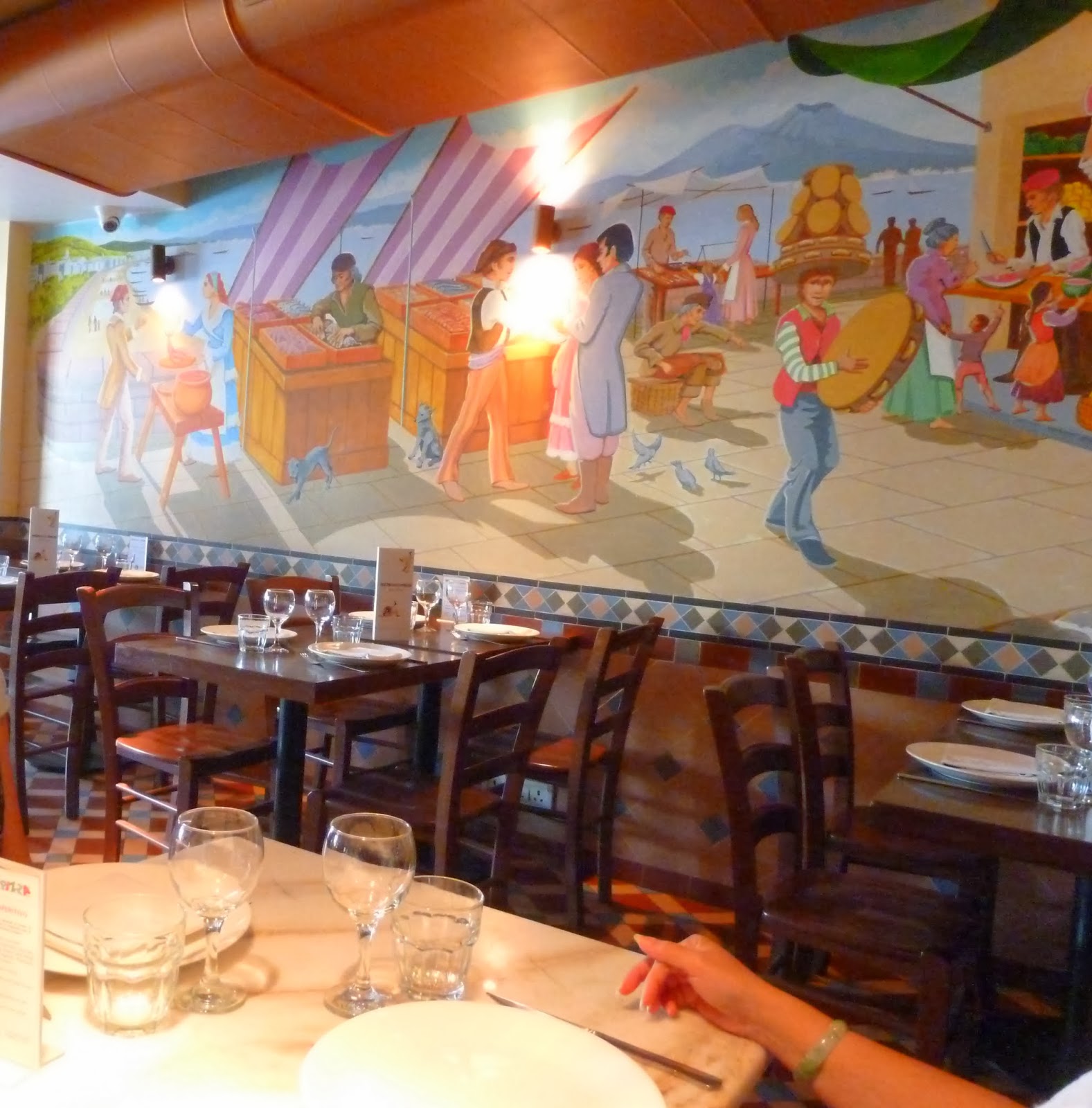 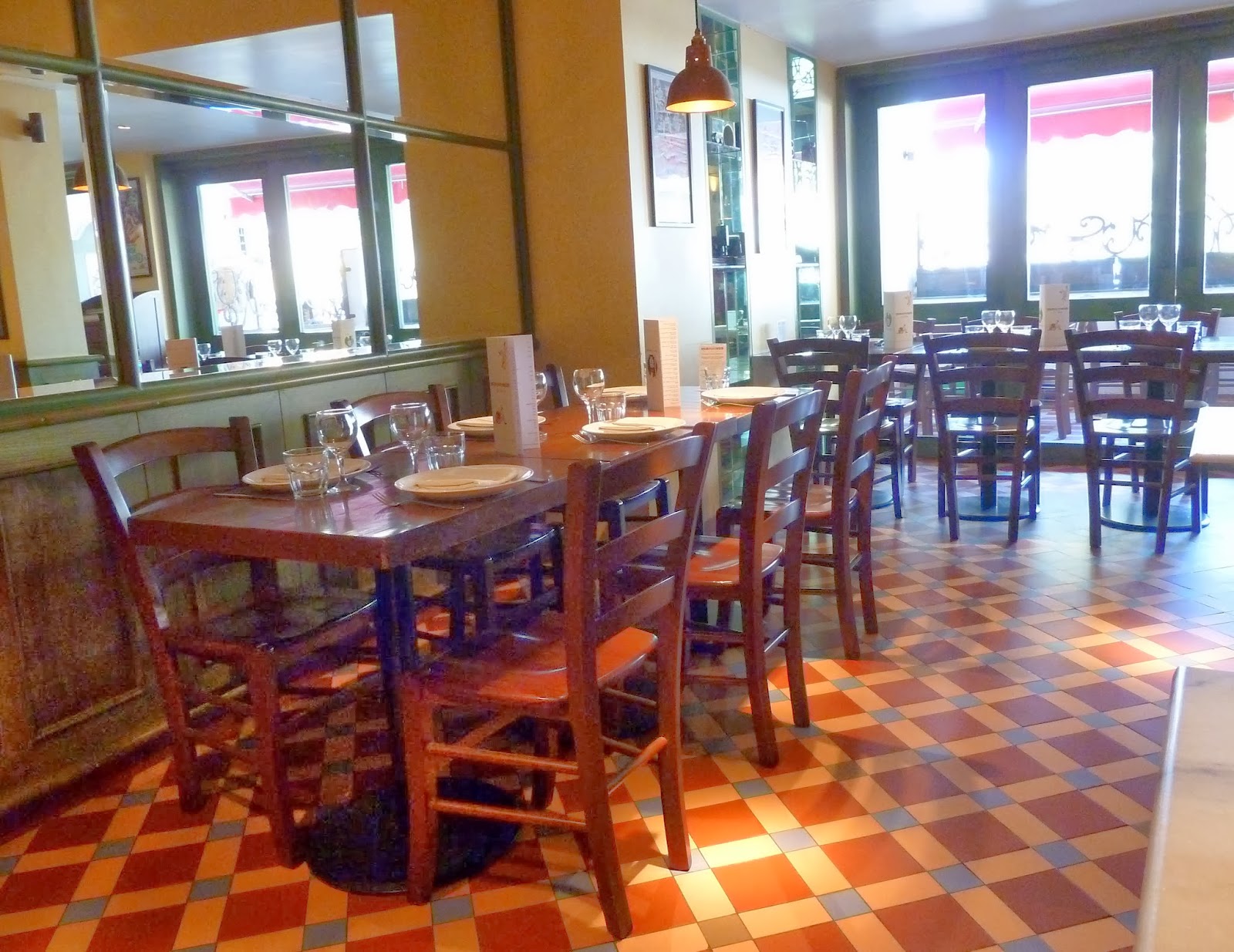 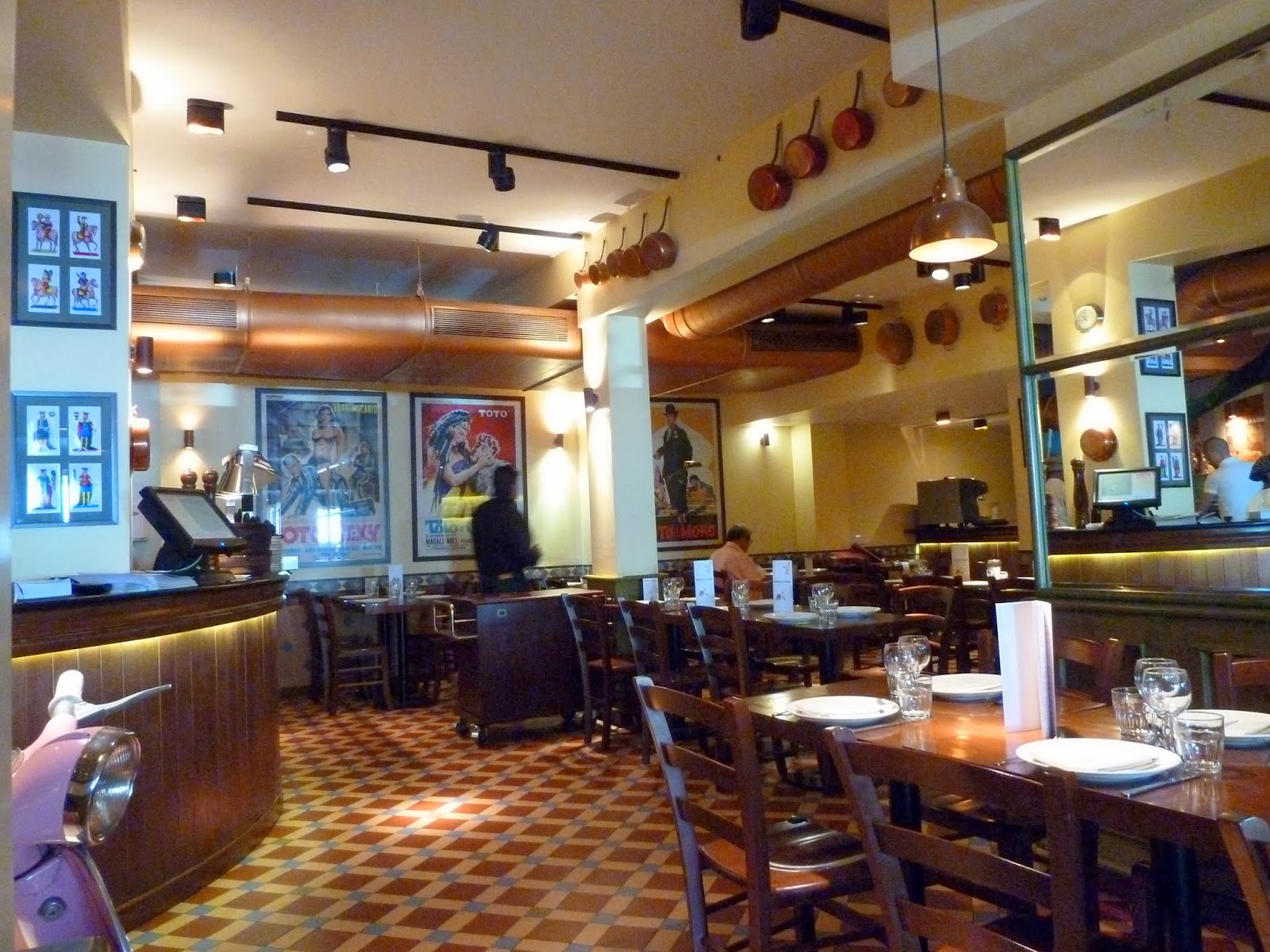 We got our menus and soon the obligatory Chilli flakes, Chilli Oil and Oregano turned up. We ordered 4 pizzas. The Napoli had Anchovies, Olives, Capers and Basil and was loaded with a lot of Tomato sauce. The Indianapoli [Indian Napoli – get it?] which had Mozzarella, Onion, Olive, Mushroom and Green Chilli, and, once again, lots of Tomato sauce. Then we got two white pizza’s, which are actually a very good idea as these are served without Tomato sauce but often have a cheese base or even a White Sauce base. First up was the Club 9 [Homage to the erstwhile Club IX] which our host insisted we have. This was a white pizza with Mozzarella, Fried Potato and would you believe, Okra or Bhindi. I was aghast but, once again I kept my mouth shut. The last pizza was the Quattro Formaggi with Mozzarella, Scarmoza, Ricotta and Parmesan. 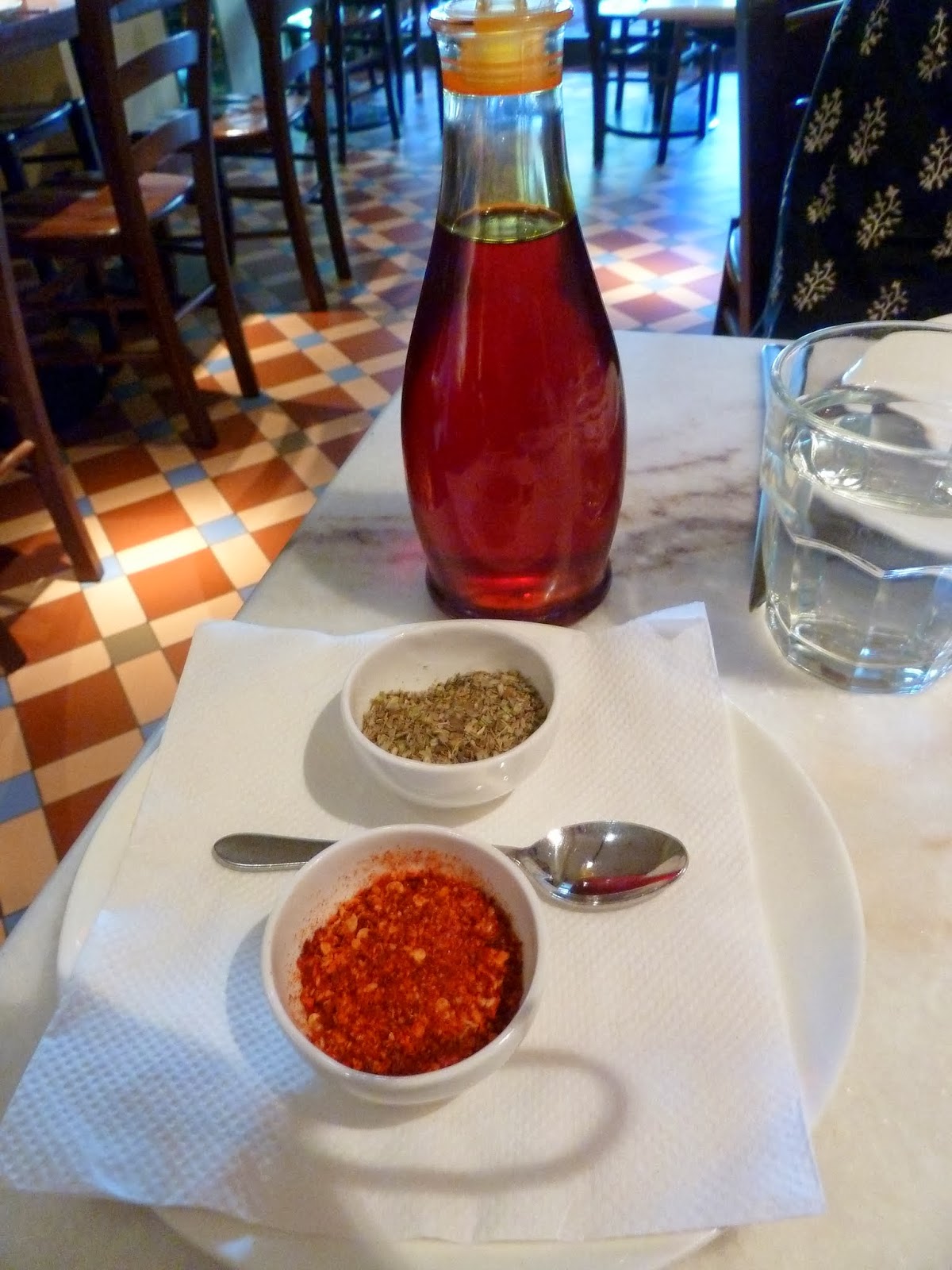 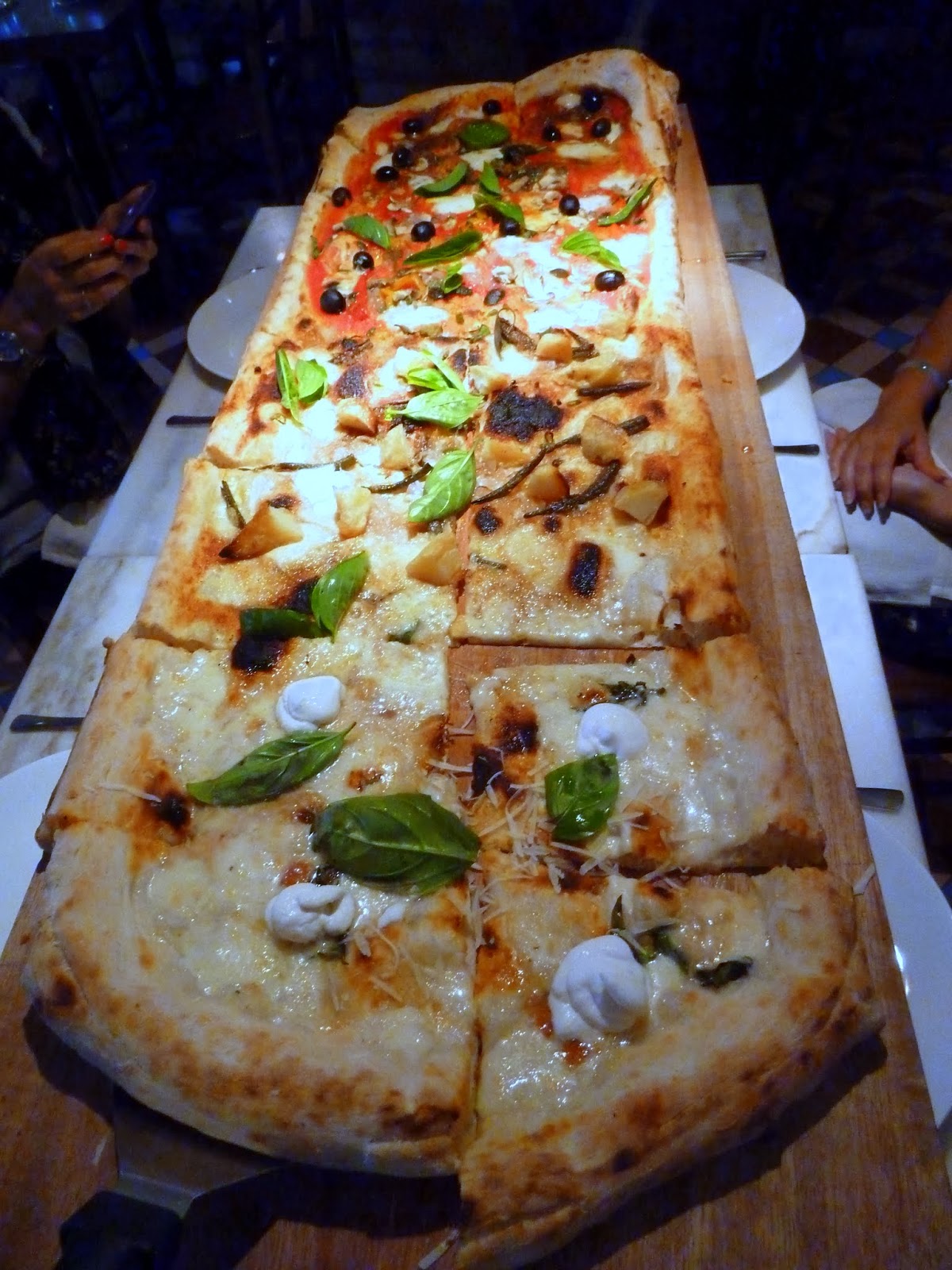 The two red pizzas i.e. the Napoli and Indianapoli were absolutely horrible. There was just too much tomato sauce on them, this may be a customer preference in India, we need `wet’ food. The result was that the pie base was simply uncooked. The base was soggy, limp and `kaccha’. The less said about the very very thick crusts the better. Uneatable. The crusts we left behind on our plates could have been used as door stoppers.

The two white pizzas i.e. Club 9 and Quattro Formaggi were better. Since there was no Tomato sauce the bases were cooked thru. But the problem was the flavourless cheese in the Quattro Formaggi. Mozzarella, Scarmoza and Ricotta are similar tasting, they are bland and the Parmesan was either missing or too scant to register. The ricotta sat on top of each slice like a blob of unpleasant foam Very uninspiring and frankly a waste of stomach space. A gorgonzola or similar cheese would have gone a long way in lifting this pizza from its bland boringness. The Club 9 with its Okra or Bhindi was simply weird. The Okra or Bhindi  was crisp fried and added no taste nor visual appeal. All in all poor.

Mind you this place is not cheap. Each pizza costs about Rs 700 - 900 plus taxes plus service charge so all in all you are looking at a pizza that costs approx Rs 1000/-. What we had ordered was in effect 4 pizzas, so the bill was suitably whopping. And the rubbish you get for that money!

As we were eating, the restaurant filled up. Mummies, some yummy many not, `baccha’ parties and the obligatory Ayahs/maids. I was totally disgusted. I had a horrible afternoon and a horrible lunch.

Posted by Stonethrowers Rants at 5:15 PM