My cousin is a senior naval officer. He very kindly invited us to watch the full dress rehearsal of the Beating Retreat ceremony on 3rd December 2013 at the Gateway of India. Before I go any further a few disclosures:

Beating Retreat is an old martial ceremony, performed at sunset, originally to recall the patrolling units back to base. Today, Beating Retreat ceremonies are performed using the backdrop of some monument. In India Beating Retreat is performed on 29th January every year at the India Gate. This signifies the end of the Republic Day festivities. In Mumbai it is performed on 4th December by the Navy, to signify the end of Navy Week as well as to commemorate the attack by the Indian Navy on Karachi in 1971.This year, Navy Week celebration were cancelled as a mark of respect for the sailors who perished in the submarine mishap a few months ago. So, no Navy Ball, just the Beating Retreat ceremony.

Beating Retreat was at the Gateway of India, a rather magnificent backdrop. The area had been cleaned, cordoned off, comfortable seating organised and, frankly, the Gateway looked magnificent. The ceremony starts at about 5.30 pm and ends at about 6.30 just after sunset. There was a dress code, men were to wear a shirt and tie, naval officers were to be in uniform. The whole event was really well organised. Lots of Naval boys and a few Navy girls, all looking dashing in their white uniforms, checked our passes, escorted us to the seats and looked fairly busy. A good Public Address system had been set up, lights were in place and things looked good. The weather was most pleasant. Since Cousin is a big cheese, we got to sit in really good seats. While waiting, I was very happy to see that the audience comprised of many Javans and Sailors and their families. I was told that the distribution of tickets is very fair and the Navy tries to ensure that there is an equitable distribution over all ranks. That was really nice. The Beating Retreat is not for only `Bada Sahibs.’ 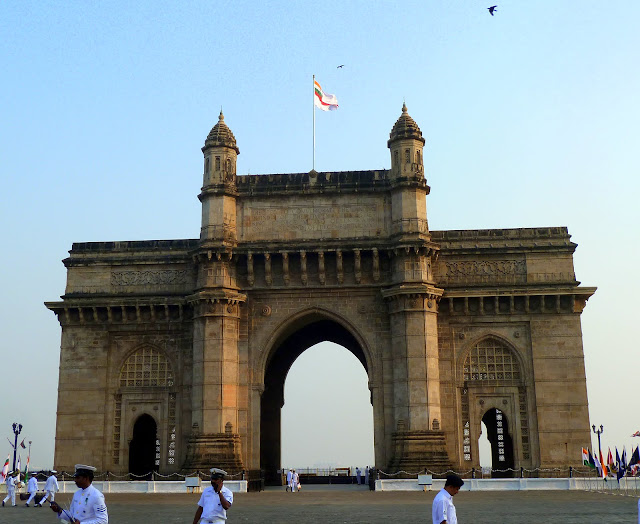 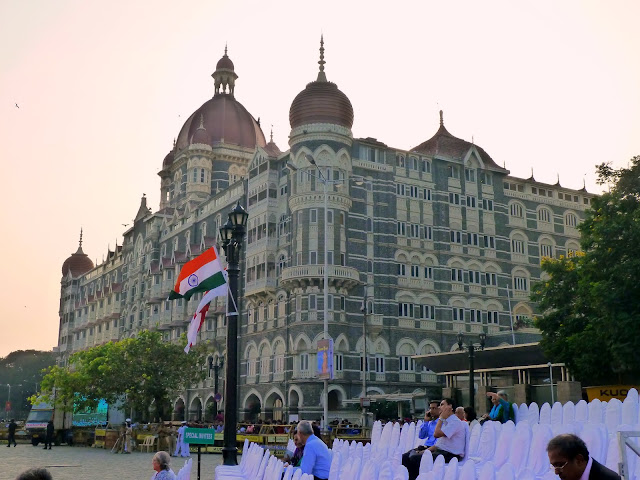 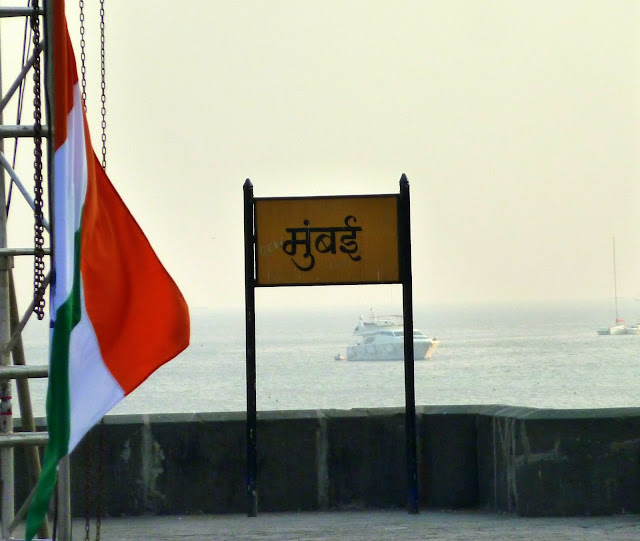 The evening started with 120 persons marching into the plaza carrying all the ceremonial flags along with a large marching band. These troops had marched along P J Ramchandani Marg, which is the road on the front of the Taj Mahal Hotel. This caused much excitement. I can understand why. Once the band stopped playing commentary started. This was poorly spoken and even more poorly written. It was replete with every conceivable cliché, and sounded like a cross between an instruction manual and my school history book. Phrases like `brave sailors’, `annals of time’, ‘deeds of valour’ and so on so forth is what I am referring to. 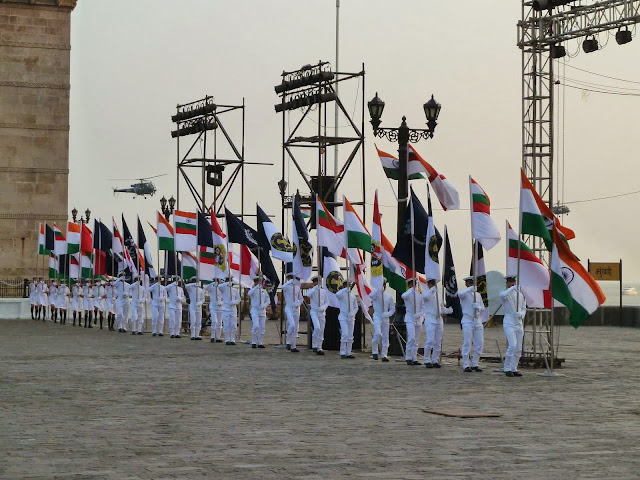 Soon we had helicopters that hovered over the sea in front of the Taj Mahal Hotel, threw down ropes and the `brave soldiers’ `bravely’ rappelled down, and soon were hoisted up. Of course, despite sitting in the prime location we could see none of this as the sea is a good 50 feet below where we were sitting. Then there was more marching, more music from the marching bands. Sailors marched in formation, changed formation, marched across each other, crossed paths and generally did lots of marching. All thru this the band played. 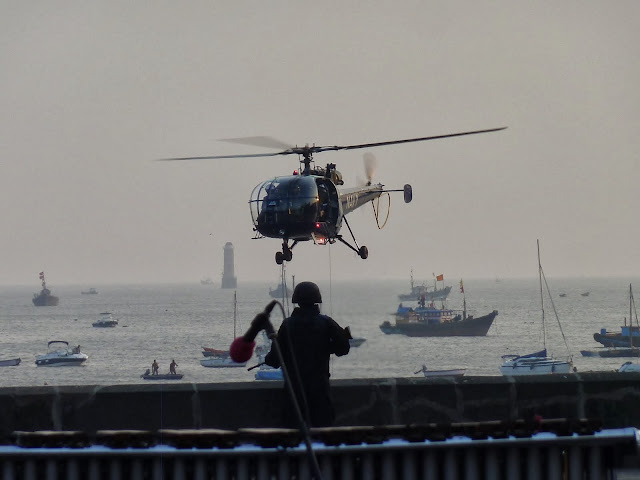 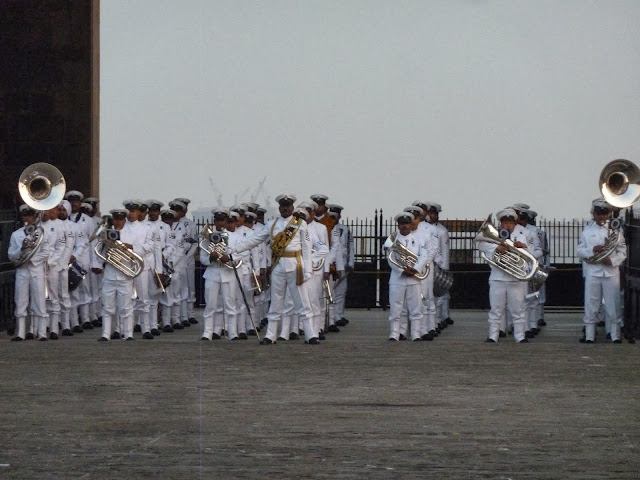 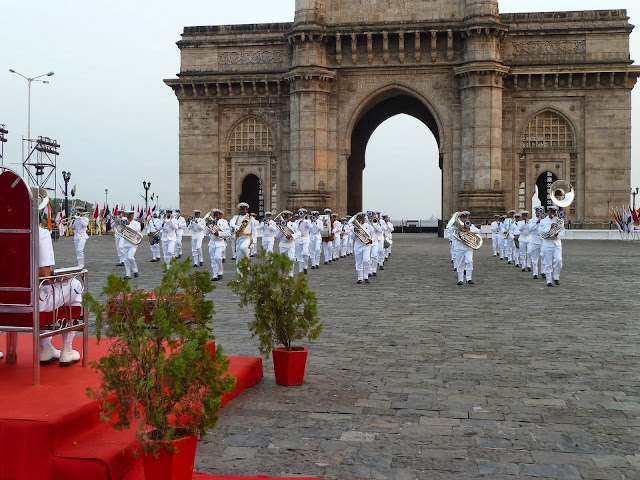 Then it was time for the lowering of the flag fluttering atop the Gateway. That was done and it was time for yet another flypast by the helicopters. That being completed we had girls from the sea cadets who came on and did an Irish dance. Irish because, the commentary informed me, the Irish are great seafarers. This was energetically done, though totally amateurish. Then there was more music, including that horribly overdone Colonel Bogeys March, immortalised in the movie `Bridge on the River Kwai’. Since it had become dark, at a magic moment, the lights went out and the drummers used illuminated drumsticks and their drums sort of lit up when struck. You know that when all else fails, get the fires going. So now we had drumsticks that were lit on fire! Literally! Frankly, left me cold. 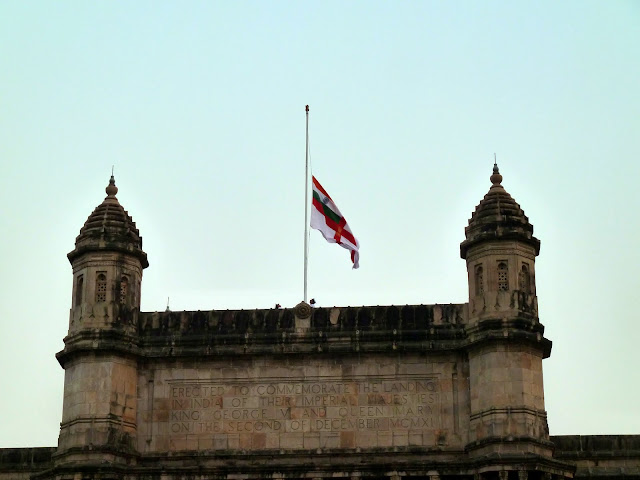 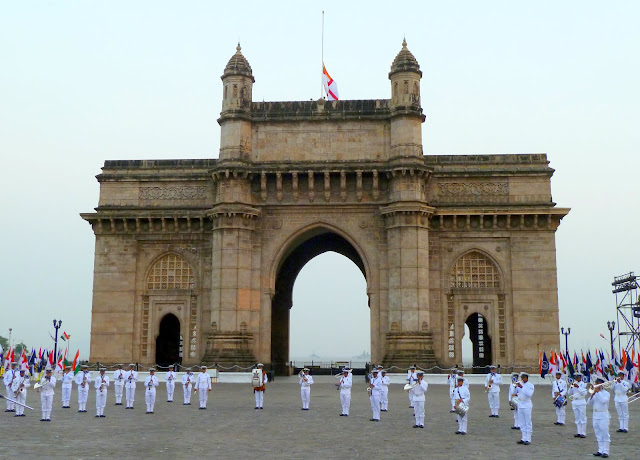 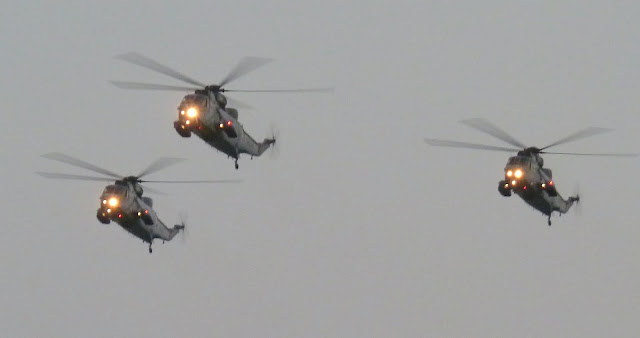 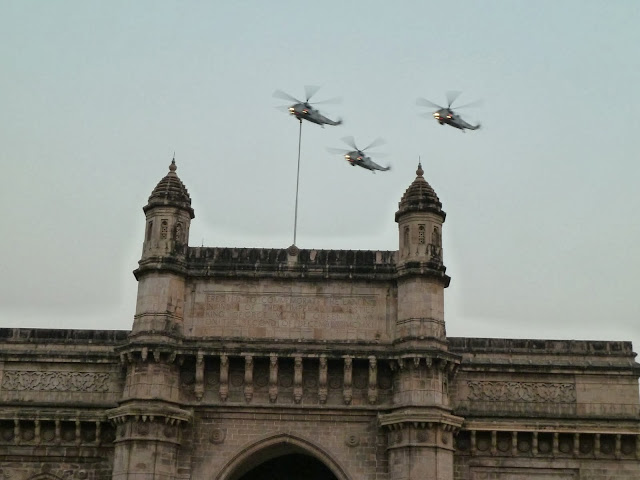 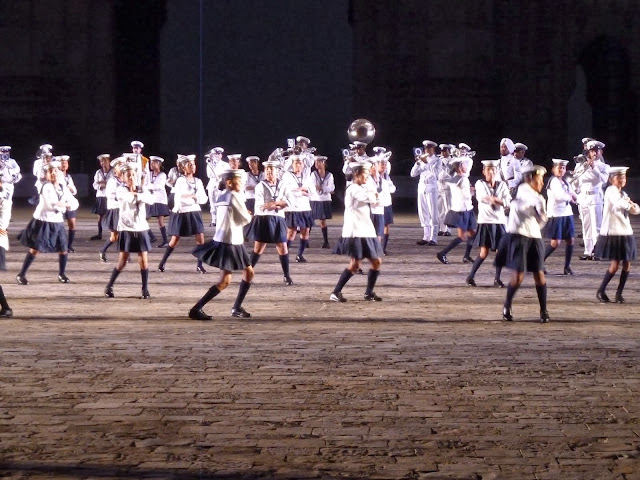 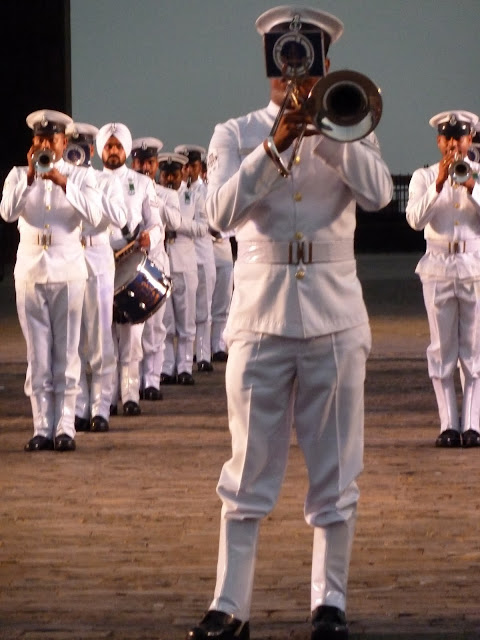 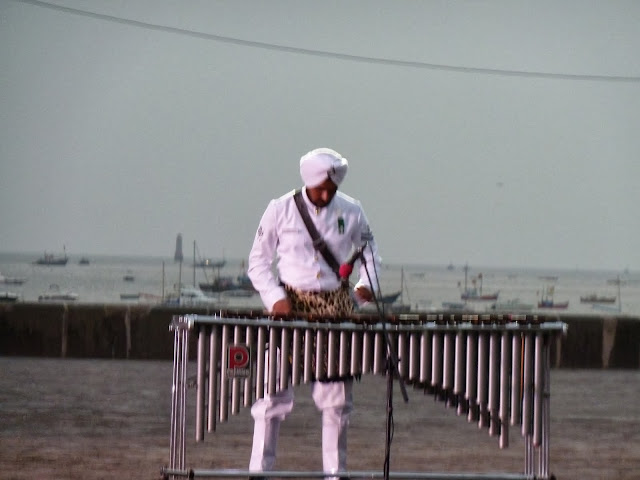 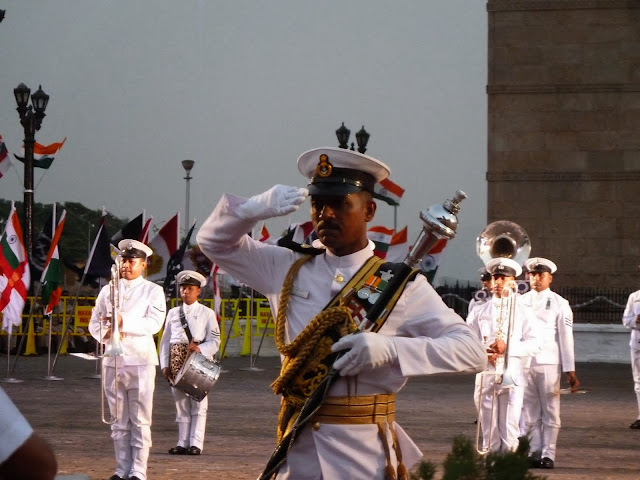 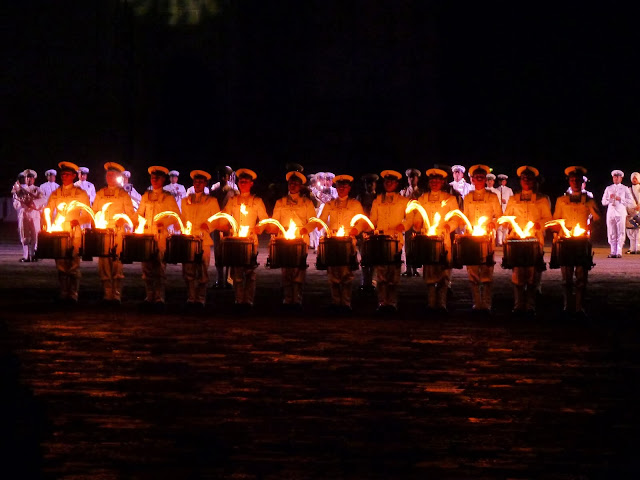 Then came the best part of the evening. Something called silent drill. Here a body of sailors did all kinds of formation marching, slapping their guns in unison, stamping their feet in unison, throwing their guns at each other, their leader walking down the middle of two rows of gun throwers, unscathed. Finally, fire again, guns were lit and leader walked thru twirling guns with fire!! That was good, honestly. 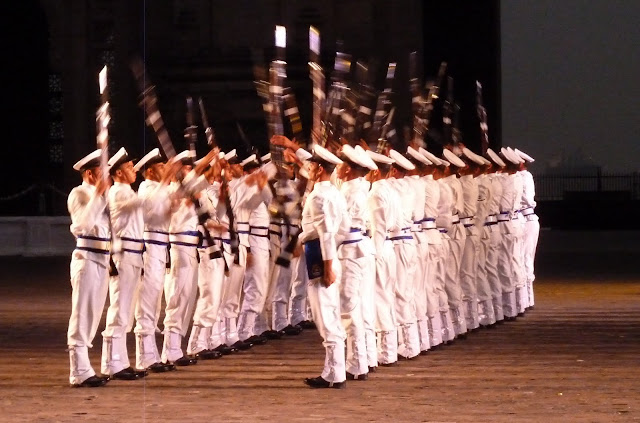 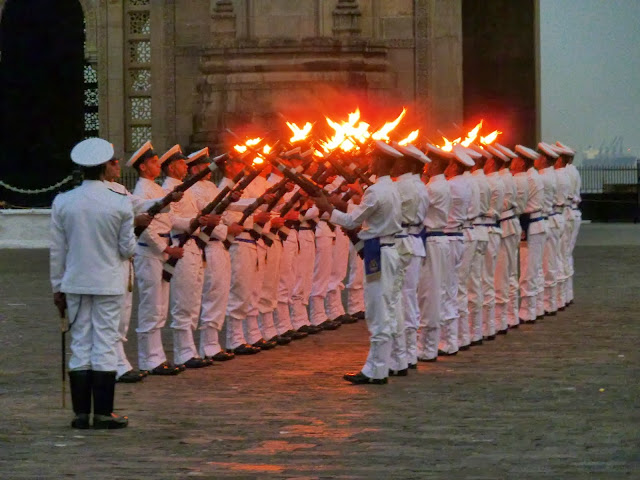 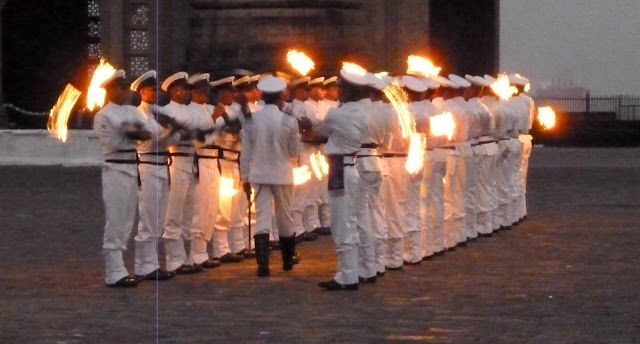 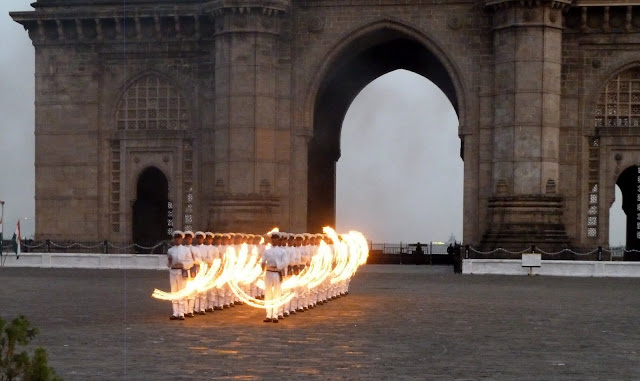 Then some more music. There was another nice moment. The band co-ordinated the music with the chiming of the bell probably atop the Taj Mahal Hotel. This was well done.  The band did have an odd choice of songs to say the least – Ghostbusters!!! Yes, “Who are you going to call? Ghostbusters!!” And to end the evening, a sort of really soppy, totally inappropriate Kenny G type song complete with romantic purple lights.

I came away very very disappointed. This was really a show which would have enthralled us 50 years ago. Total lack of imagination in the whole production. Performances that were childish. The fly past was a pathetic joke with 6 helicopters performing manoeuvres that are wholly routine in search and rescue missions, which is their job. We have seen all this ad nauseaum on the last 63 Republic Day parades. A marching band can be a thing of power, beauty and humour. Have a look at a marching band playing at most US Football games with their cheerleading squads. That is something. This I am sorry to say was an embarrassment.

Should this event have stirred nationalistic pride, should I have felt patriotic? I did not, not in the least, despite the National Anthem being played twice. Was this event supposed to stir such emotions? I do not know. Was this to showcase the Navy, its skills and diversity and above all its power? I do not know. Would a young impressionable 15 year old watching this be influenced to rush up to the recruiting office? My guess is no, certainly not in Mumbai. But the point remains, I was left cold and certainly uninspired.

Would someone please tell the Navy that in a few days it will be 2014 and we, as a Republic, will be a year older. This is not 1950. Please also tell them that we were very happy that they did not impose on us that other cliché, 28 men on a motorcycle doing gymnastics!!!

The Gateway of India did look pretty. After the event it was drinks at the Royal Bombay Yacht Club, another place stuck in a horrible time warp, and a sumptuous dinner at the Table, which you can read about in the earlier post.
Posted by Stonethrowers Rants at 7:09 PM