Back to food after a longish break. Excuse? Pressures of work, all professional.

To be perfectly honest, this was a post conceptualised some weeks ago, but, on account of the excuse, I just did not have the time to write.

London has some really excellent Chinese food. Chinatown in Soho has many restaurants, Chinese grocery Stores, Chinese Cake shops and all other things that a Chinaman in London would want. The Chinese influence is so strong that in most restaurants, even the ones outside Chinatown, waiters converse in what we would call `Chinese’ but is probably Mandarin or Cantonese. In fact, I have noticed that waiters write orders in their little pads in `Chinese’. This is quite unlike what happens in Chinese restaurants in Mumbai and Delhi. I have not looked into waiters pads in Calcutta so I have no answer. Not only are the wait staff and presumably kitchen staff Chinese, a large number of customers are Chinese or at least Oriental.

Restaurants in Chinatown are generally looked down upon by most folks. Reasons extend to the fact that waiters are rude and service is brusque, billing is opaque and dishonest, the food is unhealthy as they use the dreaded MSG and lard and God knows what else, hygiene is questionable and so on and so forth. Personally, I have no issues with Chinese restaurants in Chinatown. I find them exciting, vibrant, the food is of really good quality – far better than the stuff we get back home – and should we Bombaywallahs complain about hygiene?

Most restaurants are Cantonese. It is said that the Canton people eat everything that walks except a table and everything that flies except an aeroplane. Presumably, the same analogy applies to everything that swims except a boat! But it is true that the Cantonese have no fear of food, this is from where we get stories, probably apocryphal, of Chinese eating bugs and cockroaches and what have you. There are Hunan, Sichuan and Mongolian restaurants too. I have written about the excellent Empress of Sichuan which, unfortunately, has undergone a management change, so I do not know its fate. Of course there are Chinese restaurants in London other than in Chinatown, and very good ones too. Several of them have Michelin Stars - Hakkasan [both branches], Yauatcha, Kai, HKK and Bo.

If you were a `desi’ going to London in the mid 1980’s then you must rave about the real `asli’ Royal China at Bayswater or its branch at Baker Street. This restaurant was the first one to introduce Dim Sum to us `desi’s’’ when we went to London. It was the thing to do. Eat Dim Sum at Royal China. Various members of the Kapoor family, Dabhoo, Chintu and Chimpu were supposed to be regulars there. Mind you the food was, and continues to be really good. This was in the restaurant to go to for many years from the 1980s to 2000.

Our favourite for many years has been Phoenix Palace just off Baker Street Tube Station. If I were to pigeonhole this restaurant, I would put it in the same category as a Royal China, it is not a cheap and cheerful Chinatown restaurant and neither is it Michelin starred. We have been eating here for years, and for some reason I have not written about it before.

This is a large 250 seater restaurant with different level seating, albeit all on one floor. It is always absolutely bustling with a mixed clientele. It feels like a Chinese restaurant in Hong Kong, lots of gold in the decor, lots of wood all quite nice. The reception has a wall with several photographs of the dignitaries, celebrities and movers and shakers who have dined there. I do not know what that has to do with the quality of food as I am certain there is no direct co-relation between being a connoisseur of food and a movers and shaker. Anyway, it is a very nice restaurant with some very good food. The food being predominantly Cantonese.

In the last 7 years that we have been eatng at Phoenix Palace, I do not think we have had a single disappointing meal. Go there and order absolutely anything from the extensive menu and you will be sure to have a good meal. I do know of many other restaurants where I can confidently make this claim.

Over the years I have noticed a change in our choice of dishes when eating a Chinese meal. For us, in the good old days, a Chinese meal was a treat, a special occasion, something eaten when it was your birthday for instance. We all had our favourite restaurants and our favourite dishes, we have them today too. For many older people, a Chinese meal meant a bowl of Sweet Corn Chicken/Crabmeat soup, Sweet Sour Pork with bits of tinned pineapple and capsicum, a Fried Rice maybe some Chow Mein. 30 years ago in India, there was no knowledge of Bok Choy or Chinese lettuce or Baby Corn or Tofu. The only chilli sauce you got was either chopped green chilli in vinegar or those lurid green thick chilli sauces in small bottles.

Those who are younger have different favourites. Hot Sour Soup, Man Chow Soup, Chilli Chicken/Beef and Hakka Noodles became favourites and a whole generation grew up on this. This, was a direct consequence, I believe, of the Indo Chinese, spicy masaledar Chinese food that began to be dished out.

The youngest, now favour a Dim Sum meal and the utterly hackneyed Crispy Aromatic Duck. The sauces too have changed. Now it is Chilli Oil and the green chilli sauce and chopped chillies have all but gone. You may find them in Clubs.

Some photographs of some food at Phoenix Palace. 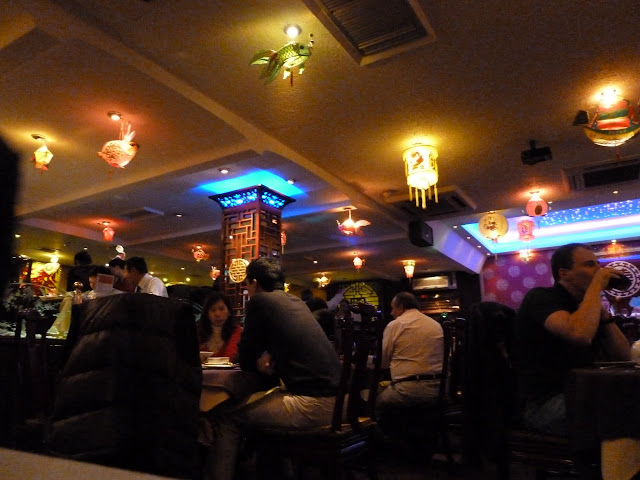 Posted by Stonethrowers Rants at 6:52 PM