Dinner was at the Goring Hotel and joining us were Mr. & Mrs. V. Mr. V and I first met 43 years ago outside the Principals office at Campion School. We were both with our fathers who were teaching us how to spell our respective surnames, both of which are complicated, while we awaited our respective interviews by the Principal for admission to school. We both got in and have remained friends since that day in 1969.

The Goring Hotel is owned by the same family since its construction 100 years ago. When it was built, the Goring was the first hotel in the world to have bathrooms attached to every room! This is so normal now but it was obviously a big thing 100 years ago. The Goring Hotel is a small, 69 room quintessentially British Hotel in Central London. The Hotel is located very close to Buckingham Palace and has often been used by the Royal Family. The last occasion was when Kate Middleton stayed at the Goring with her family the night before she got married. Why the Goring Hotel? Well, we wanted to have some classic British food and we thought what would be a better place than the Dining Room at the Goring. Reservations were made and reconfirmed. 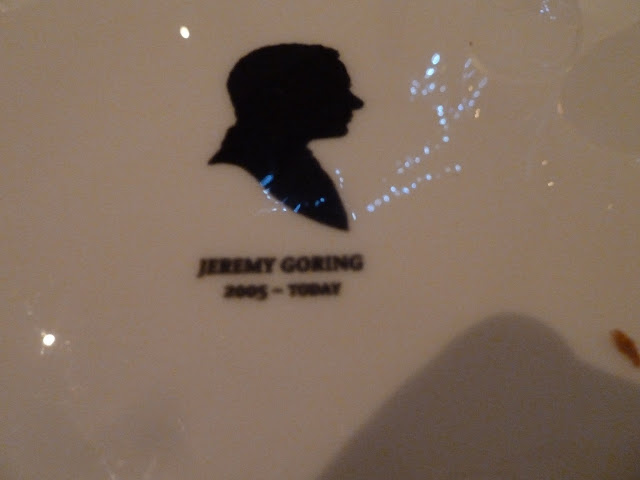 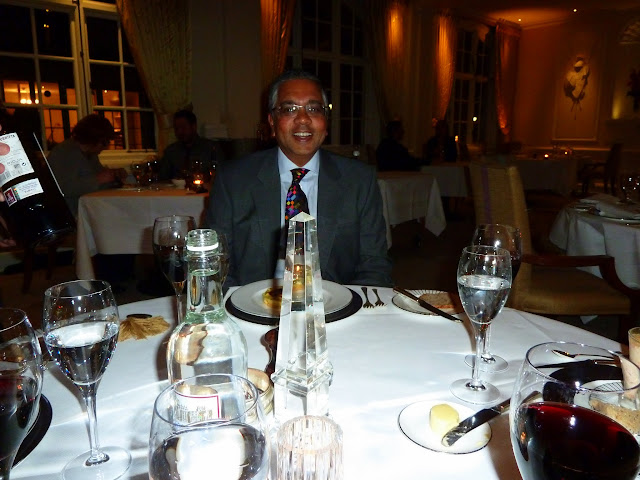 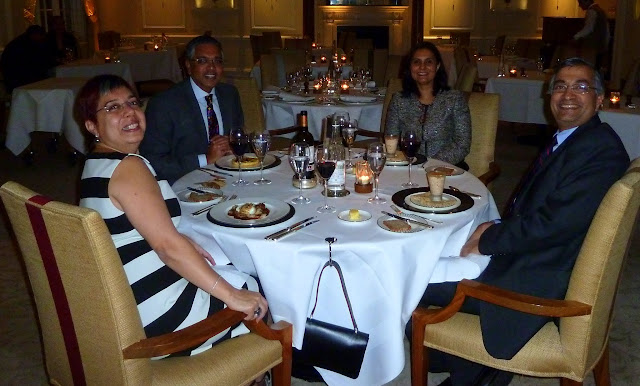 As is our wont, we reached early, so I suggested to HRH the Queen of Kutch that we have a drink in the Bar while we wait for Mr & Mrs. V. That is just what we did and let me tell you that I have not been to a better bar in my life. The Bar absolutely defined the word `convivial’. The feeling of relaxation and comfort and oddly warmth we both felt while in the bar was surprisingly pleasant. The lighting was correct, the seating and table distance was perfect, the slightly older crowd all contributed to the great ambience. The Bar had strict rules, mobiles have to be turned off, no computers allowed and business papers cannot be opened. It was a bar to relax not a bar to do business in. HRH the Queen of Kutch ordered a Goring Martini while I ordered a Negroni. Both drinks were fantastic and alcoholic not the watered down rubbish we get back in India. Excellent. Soon Mr. & Mrs. V arrived and we went off to the Dining Room.

The Room was large and handsome with well spaced tables and unfortunately not very full. Anyway, we were handed our menus and a Wine list. Mr. & Mrs. V decided to have the Eggs Drumkilbo. This dish has a fascinating history. It is named after the Estate with Castle in Scotland owned by the Queen Mother. The dish was invented for the Queen Mother and remained a favourite hers. Only two establishments have the recipe, the Goring Hotel and Buckingham Palace. Basically it comprises of Shrimp, Lobster, hard cooked eggs, Mayonnaise, other seasonings all combined and covered with a Jellied Chicken Consommé. It is a sort of Prawn Cocktail and Egg Mayonnaise combined. You eat this with Brown Bread. The dish is served cold. It was a substantial portion and it was very good. Mr. & Mrs. V polished off the dish, not before giving us spoonfuls to taste. At this point Mr. V remarked that one thing that irritates him immensely is restaurants that serve small portions. He was most happy seeing the portion size in the Dining Room.

HRH the Queen of Kutch had Warm Duck Livers with a Poached Duck Egg, Artichoke Puree and Sherry Vinegar Dressing. The dish was perfect. The Livers cooked just right and the Poached Egg had a liquid yolk, oozing and creating a sort of Sauce. I ordered the other signature dish, Glazed Scottish Lobster Omelette. A thing of beauty it was, Lobster, Egg, Thermidor Sauce all cooked together. Really a classy dish.


For mains, HRH the Queen ordered Pan Fried Dover Sole. This came with Sauté Potato and Spinach. She was happy with the dish. The whole fish was presented and then the fish filleted tableside.

Mrs. V ordered Slow Cooked Best End of Lamb with Purple Sprouting Broccoli and a Rosemary Jus. This was cooked Medium. She said the dish was good. I think it was as she finished it. Both Mr. V and I ordered a British classic, Beef Wellington which came with Roast Potato, Savoy Cabbage and a Red Wine Jus. Excellent. The Beef was medium rare as ordered and very good. A Beef Wellington is a particularly difficult dish to cook. What happens here is that a Beef Fillet or Tenderloin is quickly seared. Then it is smeared with Mustard, covered with Mushroom Duxelle and the whole thing wrapped in pastry. Then the whole package is baked. Since you cannot see the meat, there is no way you can tell if the meat is cooked to the required doneness as it is covered with pastry. So it is a matter of tremendous skill to judge if the meat is cooked. Both dishes were presented on the Trolley and carved tableside.

Deserts were a difficult choice. Mrs. V ordered a homemade Ice Cream which was attractively served. Mr. V ordered an Amedei Chocolate Mousse with Caramel. This looked very good and had a portion of Honeycomb too. I ordered the Spotted Dick, well; I was in a British restaurant! Spotted Dick is a sort of Sponge made with Suet and candied fruit. The Sponge is steamed and not baked. The Sponge is served with a simple Custard or Crème Analgise as the French call it. Very nice, not too sweet and the Sponge was moist.

It was a most wonderful evening right from the Bar, the meal and the company. We thoroughly enjoyed ourselves. While the food and the Dining Room were no doubt good, I came away with very favourable impressions of the Bar. A really nice Bar. Fully recommended.
Posted by Stonethrowers Rants at 12:10 AM