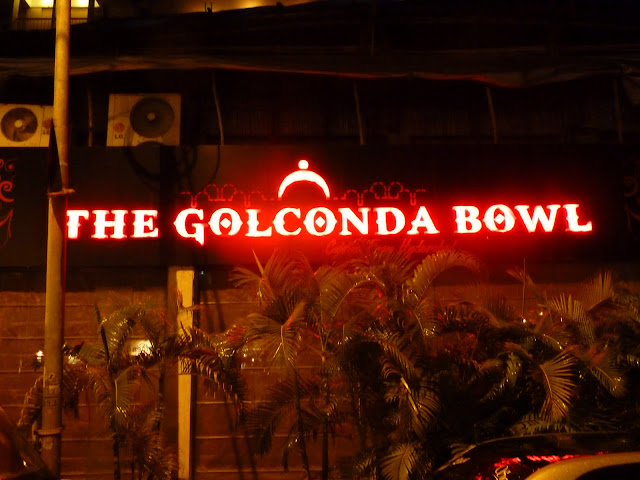 Scene: Friday night 9.15 pm. Great weather. No religious restrictions on eating meat. No long weekend. No children’s exams. In other words, restaurants should be packing them in. Golconda Bowl operating at 30%! I groaned, let this be a good meal, I hoped as we walked in.

Soon we were seated and given the menu. We knew what we wanted. A Kacchey Gosht Ke Biryani [which we did not have the last visit] and the Patthar Ka Gosht [which was truly outstanding the last time]. The Steward taking the order, a most pleasant chap, suggested that we have one more kebab the Murgh Nizami Tikka. The order was completed with a pint of beer for me and a 12 year old Glenfiddich for HRH the Queen of Kutch.

First arrived the Murgh Nizami Tikka [Rs 300 as on February 2013 + Tax + 10% Service charge]. This was boneless pieces of chicken marinated in Yogurt, Spinach, Mint and coarsely crushed Coriander Seeds, then cooked in a Tandoor. It was really quite a good kebab.

Next to come to the table was the amazingly good Patthar Ka Gosht [Rs 350 as on February 2013 + Tax + 10% Service charge]. This is lamb [actually Goat in India] that is flattened, marinated and cooked on stone that is heated on charcoal. Truly delicious and the meat itself was of very good quality.


Last up was Kacchey Gosht Ke Biryani [Rs 500 as on February 2013 + Tax + 10% Service charge]. This is a Hyderabadi way of making Biryani. Raw meat is added to the par boiled rice and the whole lot is cooked together. This style of cooking Biryani differs from the other Biryanis where the meat is cooked separately and added to the par boiled rice. The Biryani was garnished with Birista which is caramelised onion, mint and a hard cooked egg. The portion was large by any standard. The dish was a Biryani and not fried rice or stir fried rice which is often the case. The rice was perfectly cooked with each grain separate. The dish was extremely tasty. My only complaint was that there was very little meat in the portion we were served. Whether this was because of a mistake or it is usual I cannot tell you. The Biryani came with a bowl of Dahi Ki Chutney which was some sort of Raita and a bowl of Mirchi Ka Salan sort of spicy gravy. The Dahi Ki Chutney was rather strange. The Mirchi Ka Salan   was top class. Very spicy but good. All in all a very well made tasty Biryani. I maintain that there was very little meat. 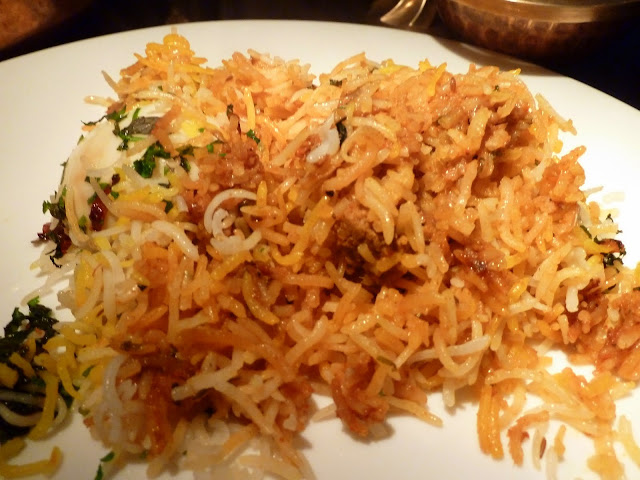 By this point I was a very relieved man. The food was as good as it was the first time around. No fall in standards of cooking nor of produce. Service was good, smooth and knowledgeable. The place was in good shape, no discernible property fatigue. A very good meal once again and the prices were most reasonable. I do recommend you visit this place. I do also fear that it may not last very long but that only time will tell.
Posted by Stonethrowers Rants at 5:39 PM