Markets and the Bandra Farmers Market

Markets are a joy to visit. By markets I mean the produce markets not stock markets or bullion markets. You often get the best vegetables, meat and fish at markets. Wherever we are travelling, we make it a point to visit the local market, preferably the main one in a city. In Mumbai, we have our very own Crawford Market. Unfortunately, today it has a small vegetable section as most of the vegetable vendors have either sold their shops to smuggled goods guys or simply moved away and live off the income on the rent they receive for their tiny stalls.

We have been to the legendary Mercat de la Boqueria in Barcelona and the Viktualienmarkt in Munich is equally attractive. Les Halles de Lyon is fascinating; Billingsgate the London fish market is exciting. Lille has a decent farmers market. In Bangkok we have been to the floating market with senior Mrs. Stonethrower as well as the flower market. Redding Market in Philadelphia and the market cum entertainment centre Faneuil Hall in Boston are nice in their own, very American way. One day, we will visit the big daddy of them all the Tsukiji Market in Tokyo and the Pike Market in Seattle. Markets are fascinating, exciting, vibrant and a real treat. We visit not only the large markets, but ferret out local farmers markets and try and visit them.


Borough Market in London is one we go to regularly. This is one of Londons oldest markets and is open on Thursdays Fridays and Saturdays. Its a facinating place.

As opposed to actual markets you have farmers markets. These are slightly different from regular markets. Here the markets are set up on fixed days and have generally smaller individual producers, mostly farmers and not traders, who set up tables and stalls to sell their produce. This may be either vegetables, fruits, meat products and sometime prepared foods and beverages. Farmers sell directly to consumers circumventing middlemen. Often, the produce sold is organic, seasonal and produced within driveable distance. The west has several farmers markets.  This concept is rare or nonexistent in India.

Our absolute all time favourite Farmers’ Market is the Marylebone Farmer’s Market held in a parking lot just off Marylebone High Street in London. It is held every Sunday from 10am to 2 pm and whenever we are in London we absolutely make it a point to visit it. HRH the Queen’s idea of a champions breakfast is to stand there and have ½ dozen fresh oysters shucked right before us by a craggy fisherman. At a pound an oyster they are an absolute steal. We have often seen staff from restaurants like J Sheekey and Bentley’s Oyster Bar and Grill, a famous fish restaurant in London, pick up a sackful of oysters from the fish stall and later sell them in their upmarket restaurant at a staggering 13 to 20 pounds for a ½ dozen (+ service charge of course). At this delightful market, we have seen the produce change with the season from Asparagus in spring to Pumpkins and Butternut Squash in Autumn.


A beginning has been made in Mumbai with the Farmers’ Market which assembles every Sunday at Bhalla House at the top of Hill Road. The market opens at 10 am so we decided to visit it, armed with our trusty camera and see what this was all about.

A short walk from home led us to the Market by about 10.30am. I was pleasantly surprised to see loads of people there. I had thought that being a Sunday, neither would the market be fully open at 10 am in as much as all the vendors may not have set up and, punters would be few and far between. I was wrong on both counts. At 10.30 the market was fully operational. It seems to me that the eco friendly, organic brigade does not have heavy Saturday nights. Maybe I am being cynical again; these guys assemble here at 10 am on a Sunday as it’s their livelihood. 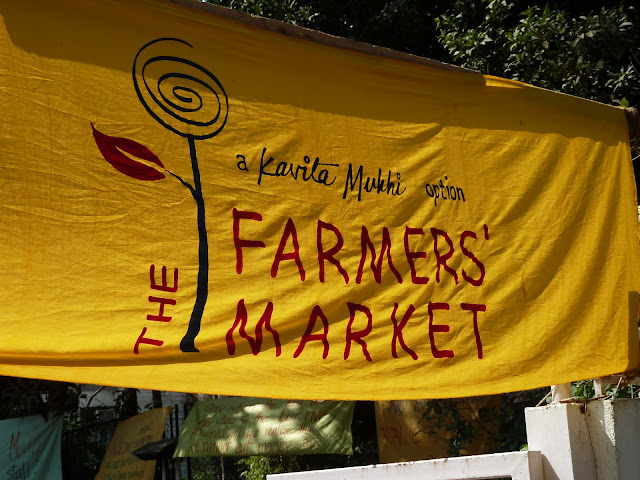 The Market is held in a playschool, so there is an open central yard where vegetable vendors had set out plastic bins containing various produce. Lady Fingers, Aubergine, Onions, Potato, Beetroot, Tomato, Capsicum, Spinach, Corn, Carrots, French Beans, Drumsticks, Asparagus, Dill, Methi and Pak Choy were all on sale. There was also an abundance of grapes, oranges and strawberries. Lots of housewives were busy picking out the best pieces and stuffing them into their bags. This resulted in lots of damage to the produce, but clearly the early bird theory was in operation. 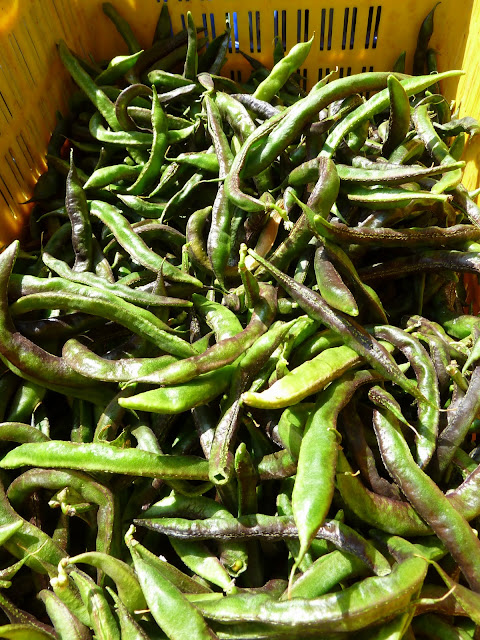 Also in this yard were stalls selling organic apricot, various types of flour and even T shirts made of organic cotton.

To one side, there is a largish roofed room, which is presumably the classroom, where a sort of cafe had been set up. As we entered Mr. A A, a close friend, frantically waved to attract out attention. He had just eaten a Dosa made with organic red rice which he said was absolutely delicious and suggested we order one. Being a god fearing Tamilian he knows his Dosas, but neither of us were tempted.

In the room was a stall with many Papayas. The man smiled genially and offered me a bottle of Mango Wine to smell, I did. Why he had Papayas on his table and sold Mango Wine I do not know. However the whiff I had was positively horrid. A fruity, sour smell holding promise of an excessively sweet liquid the colour of urine is not exactly my idea of a drink. I smiled as beatifically as one can in the circumstances and politely declined.

The most intriguing presence was that of blind masseuse. Yes you read correct, blind masseuse. I have no clue as to what role they had to play in a Farmers Market where, I believe, one of the main objects is to give farmers a better price and the consumers a better product. But, I leave you to draw your own conclusions on this.

That was basically it. I think that once the produce is sold or destroyed by heavy handed housewives, the Market will morph into a largely bohemian cafe.

I am not a devotee of the organic movement at all. I have doubts as to how something is classified as organic and, I have doubts on whether something organic tastes better. Be that as it may, I conclude with our thoughts on the visit.

1.  I was pleasantly surprised at the relatively large numbers of people present at 10.30 am on a Sunday morning. The popularity of the market was surprising.

2.  The amount of produce available is very small.

3.  The housewives present were successfully managing to destroy at least ¼ of the produce by sheer heavy-handedness.

4.  There was one stall selling baked goods – quiches, cakes etc. Thankfully none of the horrible eggless cakes, eggless brownies, chocolates, Mukhvas and pickles stalls that dominate most food exhibitions, fairs call it what you like, were present.

This is a good beginning. Lots of scope.

HRH The Queen’s thoughts [in her own words]

1.  Contrary to Stonethrower, I did not think the market was overly full. Because of the extremely restricted space, the courtyard looked crowded when there were just 20 odd people and an equal number of farmers/vendors.

2.  Some of the produce looked extremely fresh, especially the more neglected counter with the dill, spinach and fenugreek, but it did not tempt me enough to queue up between two rows of tables behind 7 fashionable ladies who were busy squeezing the living daylights out of every decent vegetable and placing their selection in conveniently provided oh-so-cute wicker baskets. Having said that, I must admit the produce looked a cut above the stuff we get at Crawford Market and substantially fresher than our local Pali Market.

3.  The hygiene levels were appalling and that is especially galling considering the market had been open just half an hour. The area where the red rice dosa was being cooked/served was near a side doorway which led into a small alley kind of space with trash piling outside and no running water or cleaning ability in sight. Right outside the side door was a large open waste bin.

4.  Why are we so damn obsessed by hot chai? Why do we need a chai station in every possible space? Can we not last a 10 minute shopping trip without knocking back a stainless steel glass of masala chai?

5.  What’s the point of wasting space with things like organic cotton T Shirts? I cannot believe it helps any farmer and is really a complete waste of time.

In balance, the fresh produce was excellent; the rest of the space however was really overrun by jola-carrying opportunists.
Posted by Stonethrowers Rants at 4:04 PM