We were scheduled to be in Bergamo for 3 nights. However, consequent to the demands of the Italian Travel Union which dictated that they would strike and not provide airline support, taxi, bus or train services we had a cancelled flight and had to delay our arrival into Bergamo by two nights.

Bergamo is a small city alongside Milan. Being in the North of Italy it is a rich affluent city and the people are rather conservative – so say the guide books. Bergamo has two distinct parts – the Alta or old which is the classy part on top of the hill and the Bassa or new at the base. They are connected by road, bus and, of course, a funicular.

Bergamo Bassa is big and brash like Milan. Bergamo Alta is absolutely charming. It felt like being in any Italian movie, be it Godfather or even a World War II film. It was what you read about in books trying to capture the romance and charm of Italy. All the streets are cobblestones and very narrow, twisty and uphill and downhill. The buildings are very old and the churches stupendous. Walking around, was utterly charming. Every turn revealed a new visual delight. The main town square was a sight to behold. There was a public exhibition of gardens and plants. So the whole square was covered with Astroturf, and, in typically great Italian flair, large mauve cushions where people lay down and children summer-saulted with gay abandon. Being Italy, they had indulgent grandparents looking after them, and, being children, they were completely beside themselves with joy turning head over heels, literally. Since this was Italy and not America or for hat matter a `I wanna be USA - India', the children had no helmets, not safety gear and no high visibility jackets. It was refreshing to see children just having fun.

The weather was warm, a balmy 27C after the frostier 19C of London. It was necessary to dump sweaters, a relief, though short-lived. I prefer the cold. We were soon sweating.

The North of Italy is the industrialised rich. Most companies we have heard of, all being true formed by true technocrats, be it Ollivetti, Piaggio, Fiat, Ferrari, Masserati or Lamborgini, are all from the North. This is the cradle of engineering and entrepreneurship i.e. technocrats. Trading from Florence and Venice added to the wealth. This tells in the food as well as the architecture. All the great sites, be it churches, stadiums etc are all in the north. The great tourist cities, even today, are all north based. The food is richer and uses more dairy, be it butter or cream or cheese, than the olive oil driven south.

The same of course, is true of India. Where North Indian food is very rich full of dairy as opposed to the Dravidian food which is less so. You may turn my logic around by saying that this is not as a result of wealth but a direct co-relation to the climate. The North is cooler hence richer food while the south is warmer hence lighter food. May be so. The reasons may be many, but the fact that the food is richer in the North is undeniable.

We had lunch at a restaurant around the central square. For starters we had some local cured meats. We had two orders of the local Pasta called Casoncelli [folded pasta stuffed with meat] served with melted butter, sage leaves and Parmesan. The Queen had 3 types of pasta, the Casoncelli, the little Tortelli with Pesto and a third fish stuffed pasta with a tomato sauce. Brilliant. How much I longed for a glass of crisp cold white wine, but did not have one as that would have ruined my day.


Later that day we bought a local Polenta Cake which we carried to the room for a post desert dessert. For dinner we went to a local restaurant where we had Eggplant Parmesan and a delicious pizza as starters. For mains I had a Milanese Veal Cutlet, Her Highness had a Mushroom Risotto and our friends had beef rolls stuffed with cheese on a bed of Polenta. This was washed down with a bottle of Barolo which was really very nice. For desert we walked into a inc cream shop and had some chocolate/strawberry Ice cream which was really very nice. We did have our Polenta Cake to tuck into. This was a really good desert.


To conclude, you must visit Bergamo. Great little compact town, much beauty and charm, which, I hope is in the photos. 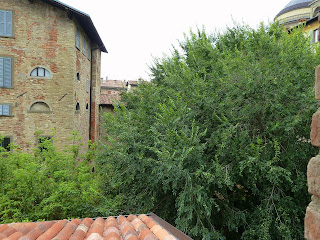 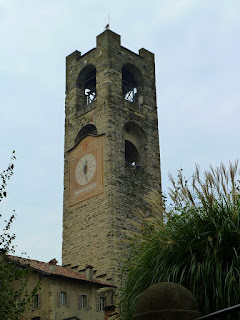 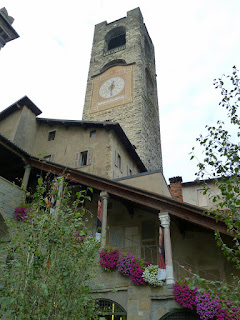 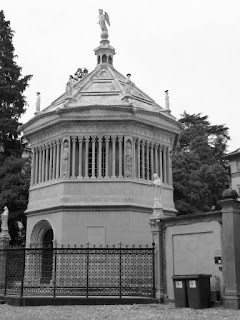 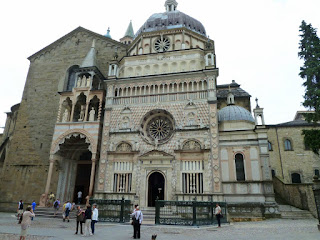 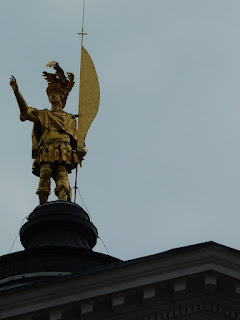 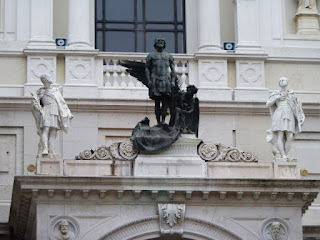 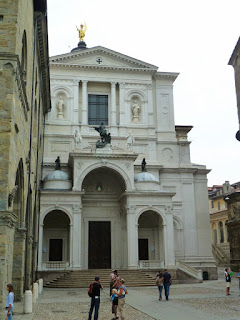 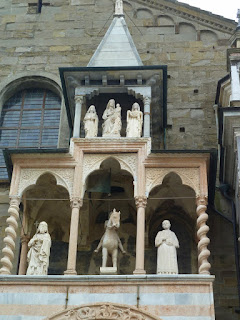 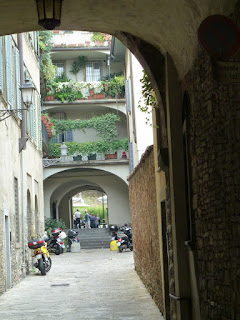 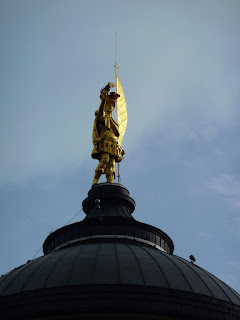 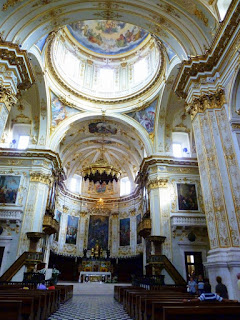 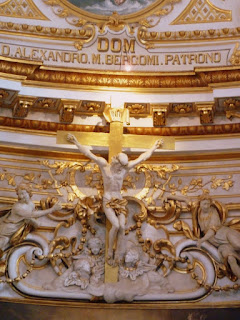 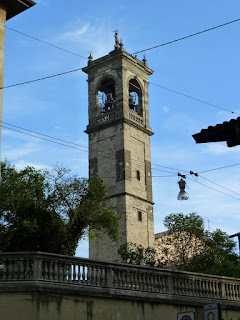 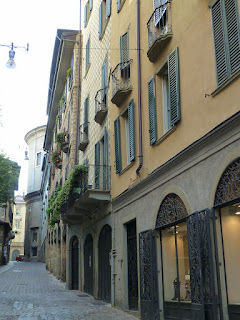 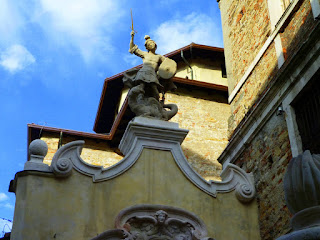 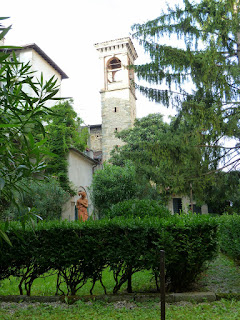 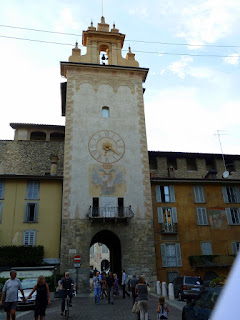 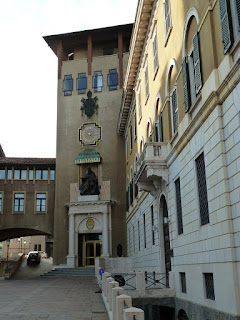 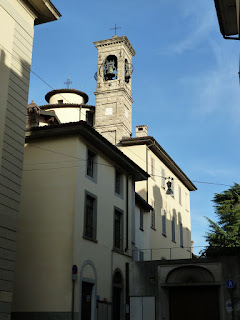 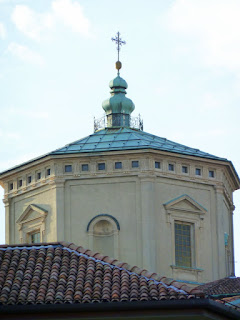 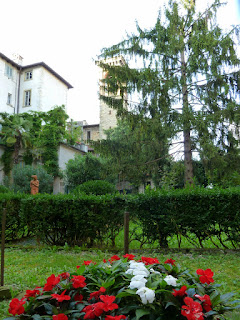 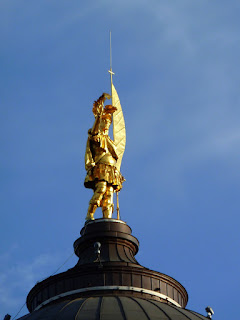 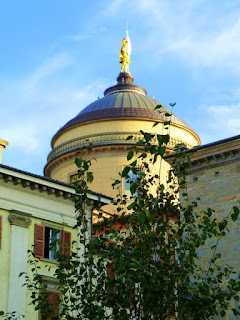 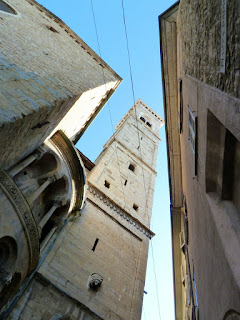 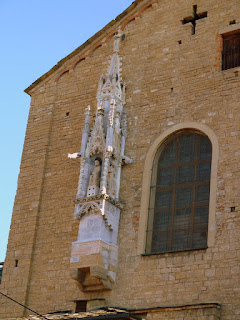 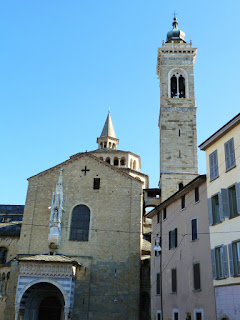 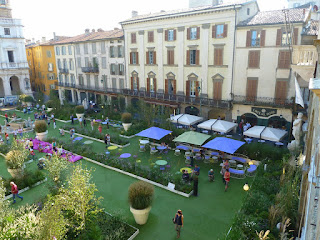 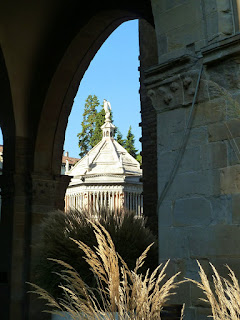 Posted by Stonethrowers Rants at 2:57 AM